As South African banks re-evaluate their models to deal with the potential implications of the coronavirus pandemic and take proactive steps to minimise the fallout, Tim Acker evaluates the local banking sector’s outlook and opportunities.

COVID-19 has disrupted the lives of most people around the world with tragic consequences for some. There is still debate around the lockdown strategies adopted, with no shortage of vocal armchair experts on social media. Regardless of what will be seen as the correct policy response in hindsight, we already know that the economic consequences of COVID-19 will be catastrophic.

In the US, the unemployment rate has jumped to 15%, the highest since the Great Depression. The weekly rate of Americans filing for unemployment insurance benefits has reached multiples of the previous highest reading. In South Africa, estimates suggest that roughly one in 10 people had lost their jobs by the start of May. The South African Reserve Bank (SARB) estimates that GDP will contract 7% in 2020. The local economy entered the pandemic already in a sickly state, making the impact all the more severe. Many businesses, especially smaller ones, will sadly not survive the economic slowdown.

What are the implications for the South African banking sector?

Banks are generally geared to economic activity. Both consumers and businesses have experienced a loss of income, so some borrowers will be unable to meet their debt obligations. The resulting bad debts will cause earnings for banks to decline this year. As the stock market is forward looking, this negative economic picture has been priced in. The share prices of South African banks have halved year to date, as shown in Graph 1. 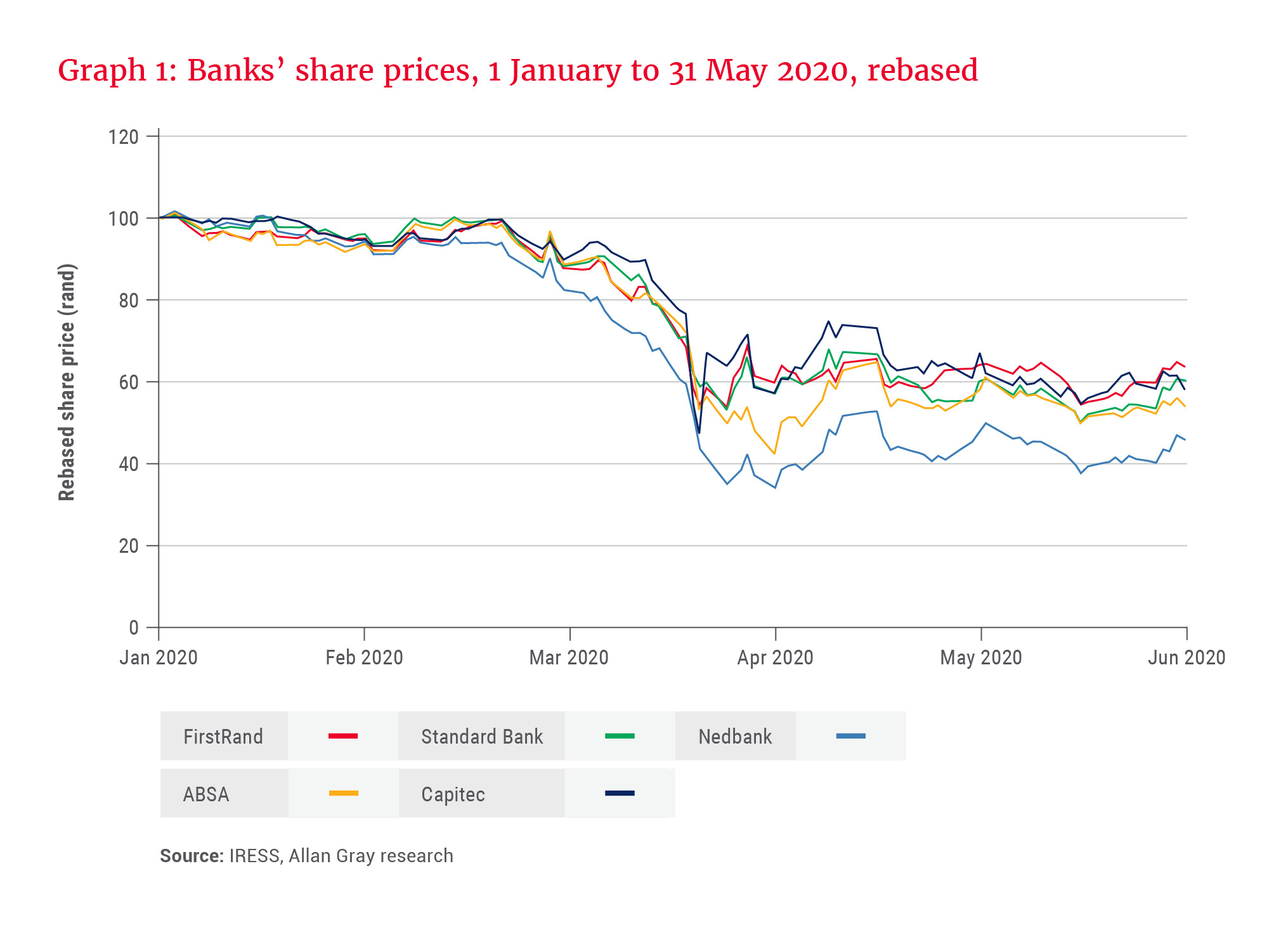 Does this decline present an opportunity, or should investors get out before things get even worse?

The immediate future looks bleak. South African banks are unlikely to pay dividends this year, as requested by the regulator. But valuations of banking shares are also at an extreme. On various metrics, the valuation of the local banking sector is now the lowest it has been since the 1980s, as reflected by the history of the price-to-earnings (PE) ratio of the sector in Graph 2. In hindsight, previous times with similar valuations (such as the 2007-2008 global financial crisis) were phenomenal buying opportunities. It is of course possible that this time is different and that earnings won’t recover. 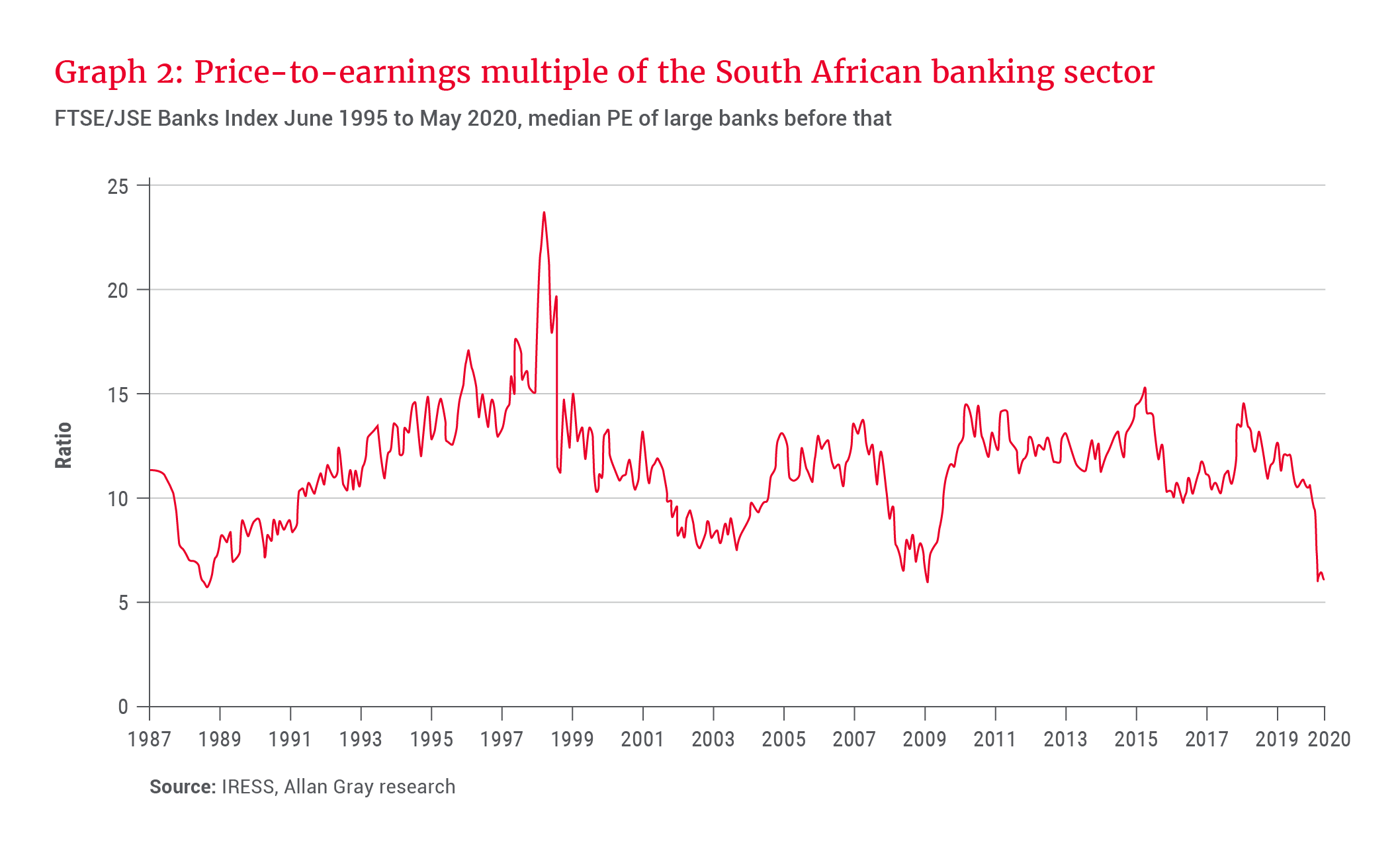 Banks will experience a drop in earnings as fee income falls and bad debts rise. Of importance for long-term investors is whether this will translate into a permanent decline in earnings power.

Another risk is financial distress in the short term. The simplified stress test below (Graph 3) shows that bad debts would have to increase to approximately double the highest levels experienced during the 2007-2008 crisis to reduce earnings to a breakeven position. A further doubling of bad debts would be needed to reduce banks’ capital levels to the minimum position normally required by the regulator. At this level, losses from credit impairments would be seven to 14 times higher than the most recently reported numbers. 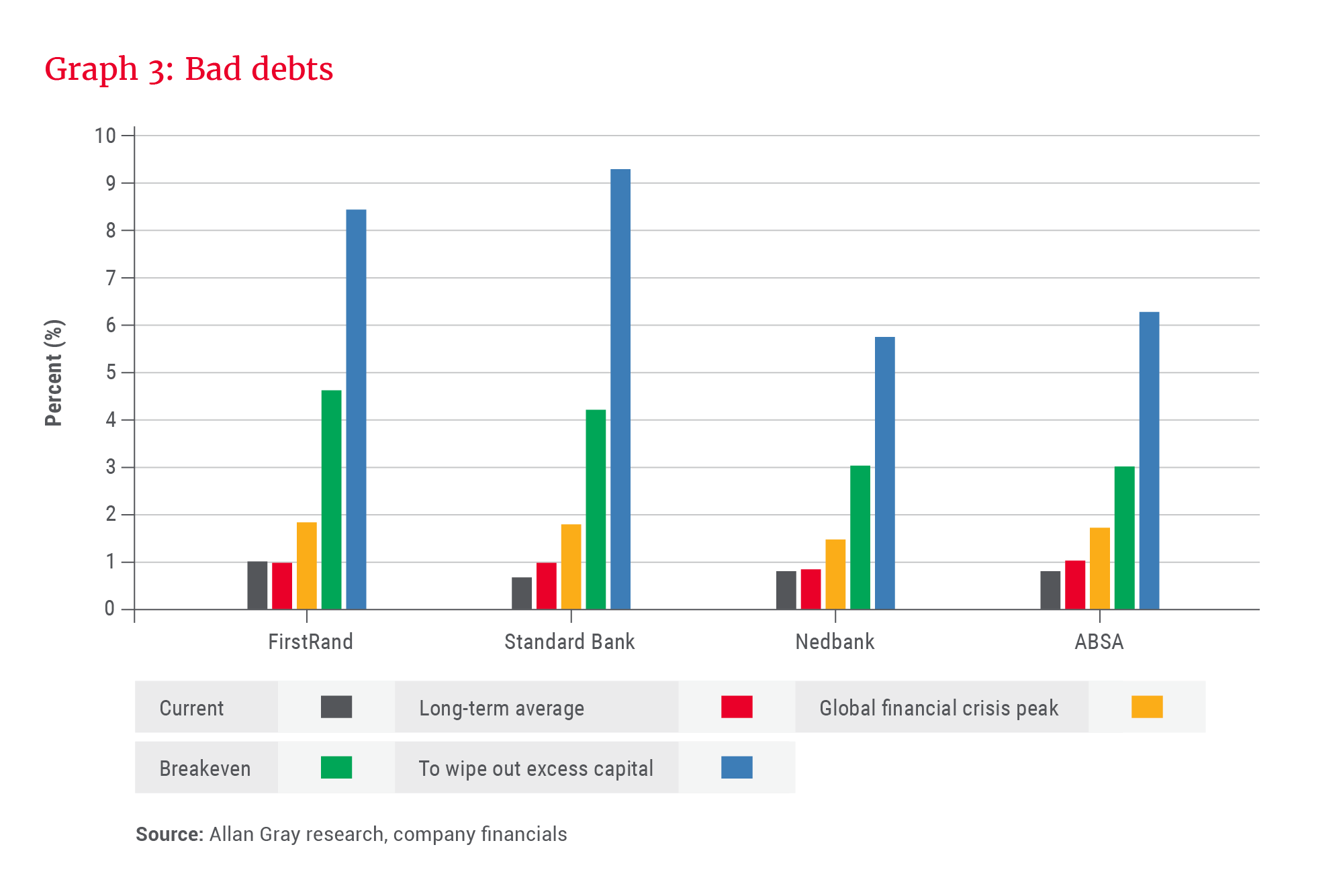 While it is likely that the economic impact of COVID-19 will be greater for South Africa than the 2007-2008 financial crisis, South African banks are also in a better position to weather the storm. For example, bank capital levels have increased over the past decade and banks have created bigger provisions for future credit losses.

There are also key differences in the South African credit market. The 2007-2008 crisis followed years of high credit growth and a boom in property prices that was vulnerable to a bust, meaning banks went into that crisis with artificially high earnings. Contrast that with conditions today, where credit growth has been benign and economic growth has been meagre. The starting point for earnings is therefore not excessively high.

In most developed countries, governments have responded to the crisis with massive spending programmes. For example, the US and UK are estimated to run fiscal deficits equal to 15-20% of GDP this year.

South Africa, like many emerging markets, unfortunately lacks the resources for such a large stimulus response. The South African government has still announced various measures, such as the R500 billion COVID-19 response package, which includes a R200 billion loan guarantee scheme. The latter is positive for banks, as it will help otherwise sound businesses with the liquidity needed to get through the crisis. Also of importance to banks are the various assistance measures announced by the banking regulator, such as the temporary relaxation of capital and liquidity requirements, and favourable guidance on the need to raise provisions on restructured loans.

Shares of South African banks are attractively priced, even if the companies lose a year’s earnings and a full recovery takes several years. Excessive concern over the short-term impact of COVID-19 has created an opportunity for patient, long-term investors.

It is hard to predict with certainty at this stage how credit losses will play out and how deep the coming recession will be, but South African banks are likely to be fine in most scenarios. Capital levels are sufficient to absorb potential losses from even a severe economic slowdown.

As investors, we have to weigh the attractive upside potential against the risks and unknown factors (such as a potential second wave of infections and lockdowns) in deciding on an appropriate position size.

Allan Gray client portfolios have the largest exposure to Standard Bank and FirstRand.

WATCH : It’s the price you pay that matters

As investors we shouldn&rsquo;t pretend we operate in a vacuum that is nicely insulated from the prevailing macroeconomic and political trends. However, it is...

WATCH : Active management: Potential for a comeback in a divided inflationary world

For most of the 2000s, the developed world has been characterised by disinflation and falling interest rates. This is despite a large increase in leverage, t...