The trend is your friend till it bends at the end

For some time we have been concerned about the sustainability and unbalanced nature of consumption growth in South Africa.

I don’t believe you can consume, spend and borrow your way to wealth while producing less and less. This applies to individuals and to countries. Eventually someone has to pay. I would have thought the events of the last five years would have provided some evidence of this. Sustainable growth requires funding by real capital built up over many decades of saving and retained profits.

The impressive growth in the earnings of consumption/consumer-based businesses relative to mining (excluding iron ore) and production activities in South Africa is a case in point. These businesses have benefited from real wage increases (in an economy with high unemployment) and government spending. Graph 1 highlights the real (i.e. after inflation) increase in GDP (grey bars) for South Africa relative to the real increase in the combined public sector wage bill and social grants (red bars). It is clear that the government wage bill has increased well above the rate of economic growth. 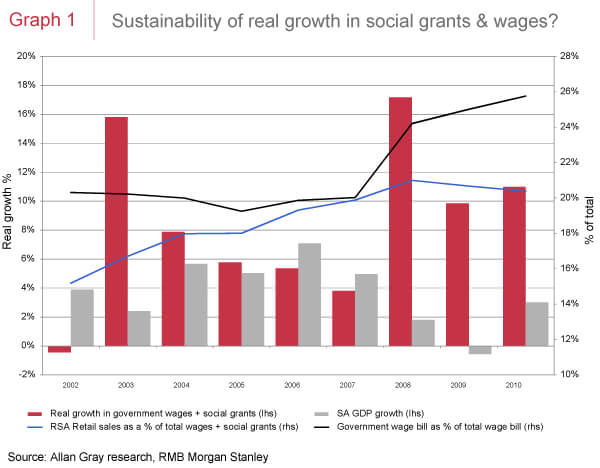 So who pays for this? Taxpayers do, both individuals and corporates, and/or increased government borrowing. Not only does this leave less to spend on other alternatives such as investment, but it also starts to become a real drag on productive enterprise. Crucially, this rate of growth has occurred during a commodity bull market and declining interest rates. One has to wonder how this picture will look if we enter a commodity bear market and/or a period of rising interest rates, as we believe may be the case.

The market is always teaching us new lessons (or forcing us to relearn old ones). It is not a fund manager’s job to theorise what should happen, but to work out what events could happen, and the probabilities thereof, and to position portfolios accordingly. By underestimating the probability of the above mentioned real increases continuing, we missed out on the second half of the great bull market in a number of South African consumer shares over the past decade.

The one way in which this unbalanced growth can be corrected is through a weakening of the currency to adjust for the loss of competitiveness brought about by real wage increases. However, this has proved not to be a magical cure for South Africa in the past, as cost increases have rapidly eroded any benefit. Additionally, South Africa is not suddenly going to find the skills to build globally competitive export businesses.

Over the past number of years we have navigated our concerns over the consequences of 1) unbalanced growth in local consumption and 2) the commodity intensive nature of Chinese economic growth, by holding large positions in non-commodity rand hedges (SABMiller, British American Tobacco, and previously Richemont [now sold out]), diversification via the Orbis funds and purchasing out-of-favour resource stocks. Given relative price movements, we have increased our positions in the last mentioned group, which have been relative losers.

The market will, as it always has, correct imbalances – indeed, we may look back in 10 years’ time at the current period and wonder how we did not see it coming – or perhaps we will all be working for a retailer or in the public sector.