Are you overly exposed to China?

As South African investors we are very tuned into the local political and economic risks that we face. But what about the less obvious risks?

We speak a lot about the need to maintain a well-diversified portfolio. Aside from simply picking different companies, industries or countries, investors need to get a good sense of where underlying returns are coming from, and what impacts those returns. They must also make sure that their investments are not all highly correlated.

Peeling away the layers of the average South African investor’s portfolio reveals that one of the biggest risks we face is exposure to China. It may be hard to imagine that the portfolios of residents on the most southern tip of Africa are highly dependent on the economy, policy decisions and consumption behaviour of Asia’s largest country, but exposure comes in different shapes and forms, from Chinese demand for mining-related material, and of course via Naspers.

The herd of elephants in the room

The FTSE/JSE All Share Index is highly concentrated, with the top 10 shares making up 56.5% of the Index, about 20% of which is from Naspers. Naspers, the Allan Gray Equity Fund’s second-largest holding, is 9.4% of the local portion of the Fund, significantly less than the Index – which should not come as a surprise considering we don’t aim to track the Index.

We think Tencent is a great company for the following reasons:

However, Tencent is trading at close to our fair value and if it were to fall significantly, the Naspers price would be impacted despite the large negative value the market currently attributes to Naspers’ other businesses. Regardless of which index you track, it’s hard to escape exposure to Naspers and therefore Tencent, as shown in Graph 1. 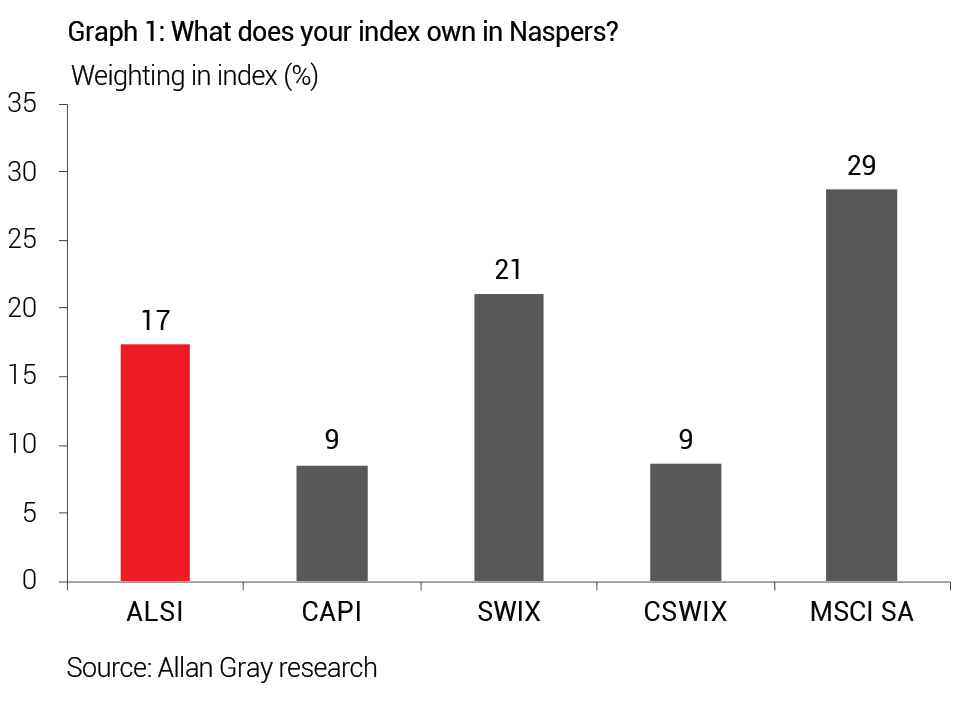 Why do we worry about China?

China is a complicated place to understand. While there is evidently much opportunity, the rapid rate that debt is growing is concerning and we believe unsustainable. Graph 2 shows the steep upward trajectory. As you can see, historically after steep peaks in debt, things tend to trend down. 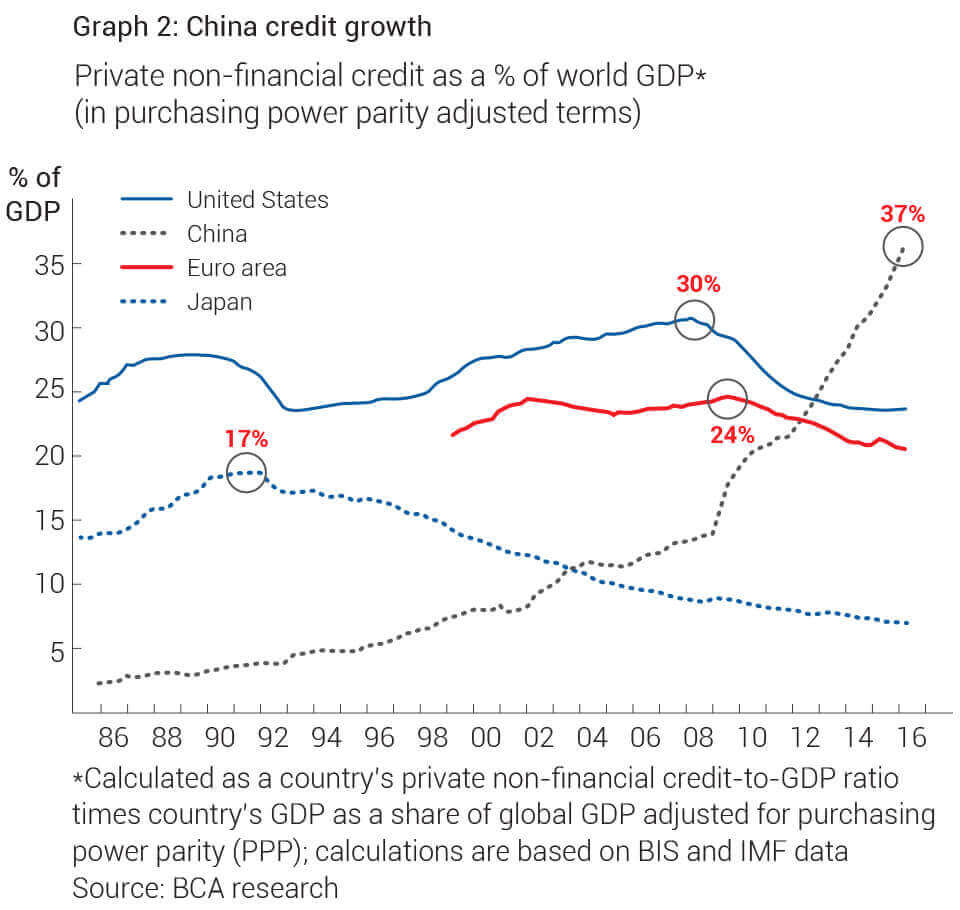 China has experienced a rapid credit boom since the global financial crisis, with private sector non-financial debt increasing from 120% of GDP in 2008 to more than 200% today. Similar increases in debt have proven unsustainable in other countries, and led to some form of correction. Put more bluntly, most credit booms end in busts, a recent example being American mortgages in 2008.

Chinese statistics are sometimes questionable but if the country’s credit figures are somewhat accurate, it is highly likely that it will experience its own version of a credit correction. This is worrying for companies and industries that are overly dependent on Chinese demand.

While Naspers’ overreliance on its Chinese investment is well documented, it is important to be aware that it is not the only company on our index that is exposed. Consider the customer base of brewer Anheuser-Busch InBev (AB InBev), luxury goods manufacturer Richemont and miner BHP Billiton, as shown in Graph 3, which looks at revenue from China, emerging markets (EM) and developed markets (DM). Note that none of these large shares would be immune to a slump in Chinese demand. This is only direct exposure: If something had to go wrong in China there would indirect consequences from EM countries too, for example, Brazilian iron ore exports. 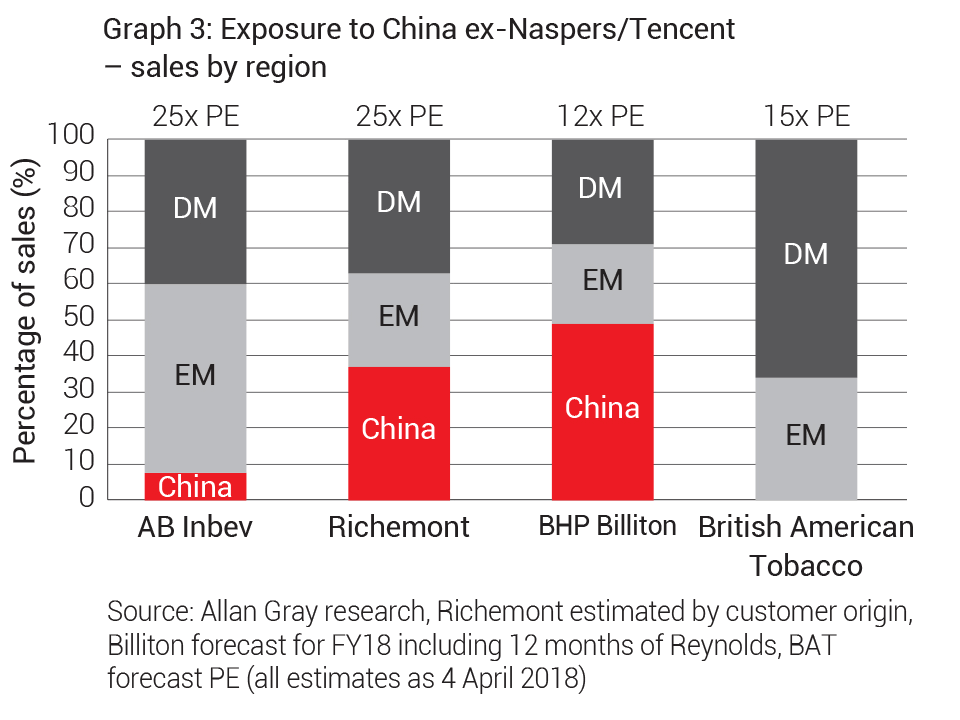 To diversify against this tail risk inherent in their portfolios, South African investors need to look for companies that are trading below their intrinsic value, with minimal to no exposure to China. One example is British American Tobacco (BAT), which has no exposure to China, as Graph 3 indicates. BAT is trading at an attractive price-to-earnings (PE) multiple relative to AB Inbev, Richemont and Billiton. We believe it provides diversification to a local portfolio at an attractive valuation.

Some people may argue that one could buy SA defensive shares rather than dual-listed shares to reduce direct exposure to China. While of course this is another way to create diversification and we do own some of these shares, we believe BAT’s valuation is currently more attractive. See Graph 4. 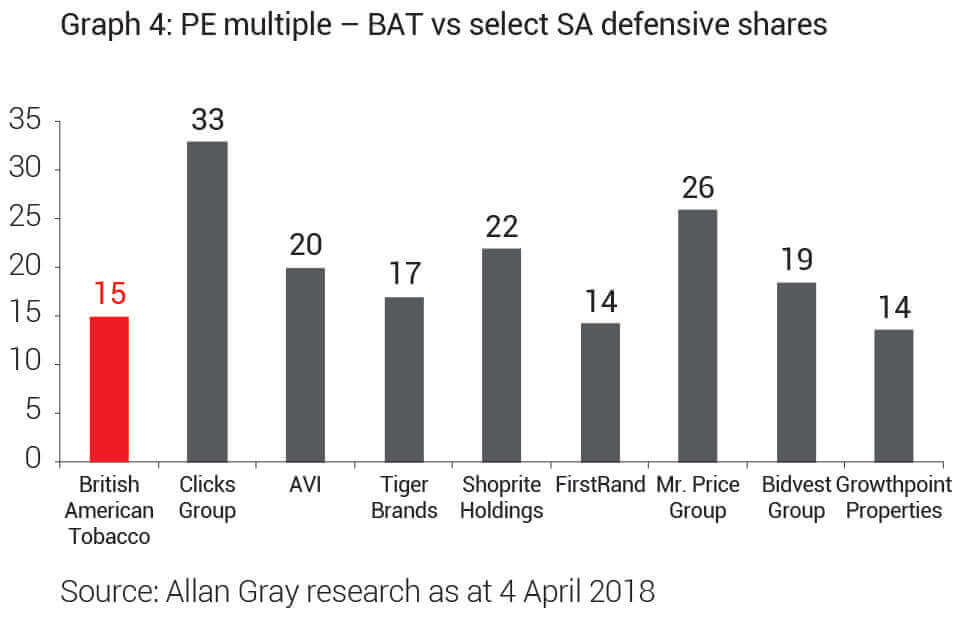 We think that investors are undervaluing BAT based on concerns about a short-term acceleration in the decline of cigarette volumes and increased regulatory risk following the US Food and Drug Administration (FDA) announcement, which looks to reduce nicotine below addictive levels in the US. We concur that these are real concerns but believe that they are more than reflected in BAT’s share price and that BAT’s development of new generation vapour and tobacco heating products should contribute to creating a more sustainable earnings stream over the longer term.

Worry about the right things

Investors need to make sure they are worrying about the right things. They should focus closely on what is in their portfolios, rather than spending time trying to forecast political or economic outcomes. It’s also important to realise that risks such as exposure to China do not have to be avoided completely, but their size in an investor’s portfolio should be appropriate. A well-diversified portfolio of attractively valued assets is key.

If we look to how we are trying to achieve this in the Allan Gray Equity Fund, the top holdings in our portfolio are a combination of locally listed international businesses which get a fair chunk of their earnings offshore, Sasol, local financials and healthcare companies.