Beware the siren song of growth

Growth has an almost irresistible allure for investors. Whether it’s a rapidly growing economy, a start-up with a hot new product, or a new industry that promises to transform our lives, investors are naturally drawn to opportunities that seem to offer the greatest long-term growth. Likewise, it is tough for most to envision a stagnant economy or a dying industry as a prime hunting ground for investment ideas.

Forecasting economic trends may be a waste of time

History tells a very different story. Looking back over more than a century of data and across 19 countries, there is actually a slight negative correlation between real economic growth per capita and real equity returns, as shown in Graph 1. For example, even though Japan had the highest economic growth rate over that period, its equity returns were about half that of South Africa, which was the weakest economic performer. This suggests that forecasting economic trends may be a waste of time and effort. Although it may sound intelligent to comment on the latest GDP figures, the relationship between economic growth and stock returns is tenuous at best. Even if one were able to make consistently reliable macroeconomic forecasts—and that’s a big “if”—it would not be a guaranteed way to reap superior returns.

Imagine if you could go back in time to the early 1970s. Armed with perfect foresight, you would know that computers, smartphones and all sorts of technology would become ubiquitous. You would also know that smoking would eventually be banned in many public places and the tobacco industry would be subject to costly lawsuits and onerous regulation. With that in mind, would you have invested in technology or tobacco stocks?

Intuitively, it would seem to be an easy decision. But you may be surprised to learn that the largest tobacco stock at the time would have been a massively better investment than that era’s largest technology company. A US$1,000 investment in IBM on 1 January 1975 would have grown to US$48,000 at the end of 2016—not a bad result. But a similar investment in tobacco company Philip Morris—now known as Altria—would now be worth about US$1.2 million!

The main reason why foresight has proved so poor in this regard is that growing industries tend to be glamorous and attract both talent and plenty of new competition. In contrast, the low-tech and litigation-prone tobacco industry experienced a considerable decline in competition, leaving the incumbents to make substantial profits as existing competitors left the business. When did you last meet an MBA graduate who said his ambition in life was to start a new tobacco company?

Focus on valuations rather than exciting stories

The lesson here is not to ignore new markets or industries, but rather to apply a healthy dose of scepticism. Revenue growth and an exciting story are not sufficient, or even necessary, conditions for good returns. Cash generation and the ability to reinvest at high rates of return are far more important.

In our experience at Orbis, a more reliable approach is to focus on individual company valuations. Rather than trying to guess which countries or sectors will offer the best growth prospects, we take a bottom-up approach. We perform in-depth research on a wide range of companies, seeking to understand their intrinsic value based on our view of their cash flow potential and reinvestment opportunities. We then step back and ask ourselves which shares appear to offer the greatest dislocations between the market price and our assessment of their value.

This approach is by no means fool proof, but it allows history to work in our favour. History shows that one of the worst things an investor can do is to over-pay for stocks on the basis of unrealistic expectations. Again, the Japanese market provides a sobering example. Graph 2 is based on monthly price-earnings ratios for the TOPIX from 1973 to 2006 and subsequent 10-year total returns, with periods grouped into quintiles based on their starting valuations. 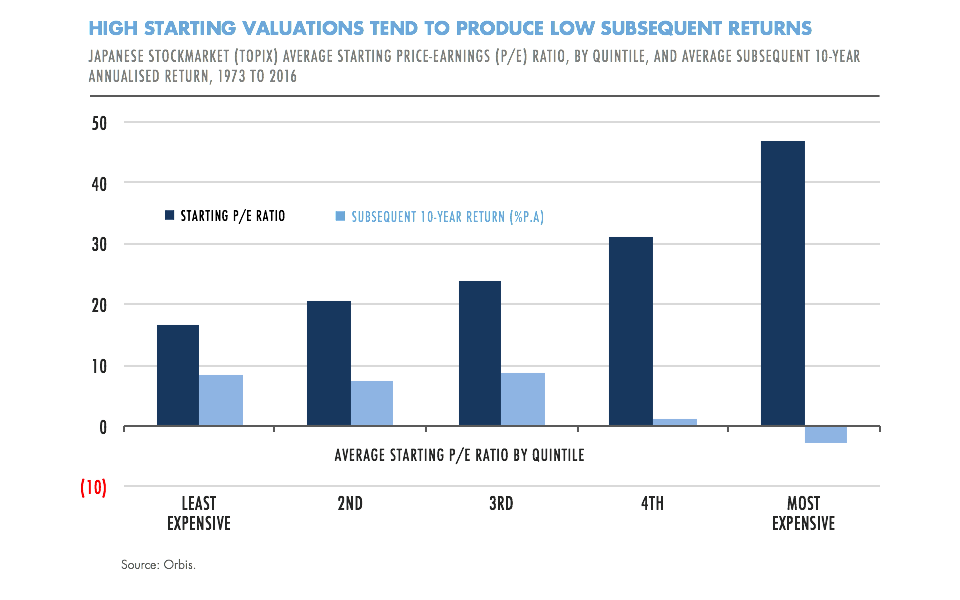 The top quintile (primarily composed of readings from the bubble era in the late 1980s) has a staggering average price-earnings ratio of 47, with subsequent average 10-year returns of negative 3% per annum. Having underpaid for prospective earnings in the 1970s, investors overpaid for earnings growth in the late 1980s. Buying when the market as a whole was cheap led to better returns, but those opportunities aren’t always available.

The beauty of a bottom-up approach is that you don’t need to wait until a whole stock market is cheap. Instead, you can select individual shares that appear to trade at a discount to their intrinsic value. This allows you to spend more time understanding individual businesses—and less time trying to divine the fortunes of entire economies.

Dan joined Orbis in 2002 as part of the Investment team and was, most recently, responsible for leading the Global Sector Investment team in London. In 2016, he was appointed to lead Orbis' UK operations and he is now chairman of the firm’s UK Executive Committee. Dan holds a Master of Arts (Honours) degree in Politics, Philosophy and Economics from the University of Oxford. He is also a qualified Chartered Accountant and CFA® charterholder.