Ian Liddle discusses why the challenges in South African mining provide an interesting case study of the 'sunk cost fallacy', a behavioural bias that sees us honouring sunk costs that are irrelevant to decisions which should be based on future costs and benefits.

I vividly remember my first economics lecture at the University of Cape Town. Our lecturer explained the concept of a 'sunk cost': a cost which has already been incurred and cannot be recovered. He went on to explain that a sunk cost is irrelevant to rational economic decision-making, as future outcomes are independent of the sunk cost. But even students of economics fall prey to the 'sunk cost fallacy' by allowing a consideration of sunk costs, instead of the future costs and benefits, to affect their decision on whether to continue with a certain activity. You may have heard this trap referred to as 'throwing good money after bad'.

This behavioural bias is fascinating for anyone interested in psychology, business and investing. A simple Google search will reveal many theoretical and practical examples. See text boxes 1 and 2 for examples. It is not yet clear whether a growing awareness of cognitive biases and their pitfalls, aided by bestselling books such as Daniel Kahneman's 'Thinking, Fast and Slow', has improved the quality of business and investment decision-making. The unfolding challenges in South African mining are providing an interesting real world case study of the sunk cost dilemma and how people respond.

One would expect everyone to choose the trip which is expected to be more
enjoyable – the Waterberg trip. But a surprisingly large number of people
choose the Drakensberg trip in experiments like this. The larger sunk cost of the
Drakensberg trip is clearly influencing their choice.

Another classic example is provided by Britain and France subsidising losses
for the development and operation of the Concorde (the first supersonic
commercial airliner) for decades with very little prospect of a commercial
return. This led to the coining of the term the ‘Concorde fallacy’ to describe
the misguided spending of more money on a project in order not to ‘waste’
the money previously spent on it.

A host of challenges

Past investment in South African mines is 'sunk' in more than one sense. A mine shaft cannot be moved to a more favourable location or sold for any significant scrap value. In previous commentaries we have written at length about the many challenges facing South African mining companies (see Tim Acker's piece in Quarterly Commentary 1, 2015 and my piece in Quarterly Commentary 4, 2013). Falling commodity prices present a major problem. But this problem is magnified by the inhospitable environment in which South African mining companies have to operate.

Many of our mines are nearing the latter part of their expected lives, which means that working areas are far from the shafts and grades are not as high as they once were. Government officials frequently exercise their power to stop the operations of an entire mine or shaft in terms of a 'Section 54 safety stoppage'. These stoppages reduce productivity and increase costs. While mining companies all support measures to improve safety, and they have dramatically improved their safety performance over the last decade, they argue that a mine- or shaft-wide closure is often too draconian for relatively minor offences.

Policy uncertainty and surprising changes of key officials (such as the Minister of Mineral Resources) make it hard for mining companies to know the 'rules of the game' and to make long-term decisions. Important stakeholders in South African mines, such as the government and unions, seem reluctant to adjust their demands to the challenging times. South African labour rules give substantial power to union bosses and mine productivity is hampered by very inflexible labour regulations. Labour and electricity costs continue to escalate faster than the inflation rate. The managers of mining companies have tended to woefully under-estimate the extent of these challenges and over-estimate their ability to improve the operating performance of the mines. To make matters worse, complaints about South Africa's 'own goals' and self-inflicted policy challenges seem to fall on deaf ears. It is hard to see the incumbent administration introducing any substantive positive changes to the policy environment unless they are forced to do so by the crisis in South African mining coming to a head.

Conditions have deteriorated to the point where a number of South African mines are running out of money and credit and are being forced to raise new capital to repay debt and sustain their operations. This is where the sunk cost dilemma comes in. The dilemma is faced both by company boards and by fund managers like us.

Harmony Gold Mining Company bought the Kusasalethu gold mine on the West Rand from AngloGold in the year 2000. It has long held to an ambitious plan to turn around the mine, but over the last decade the mine has gobbled up over R1.5 billion (see Graph 1). This can hardly be blamed on the gold price, which moved from just over R100 000 to R450 000 per kilogram over the 10-year period. The mine's total annual gold production has fallen by more than 25% over the decade, despite capital expenditure being ramped up. The mine's name is a Zulu word meaning ‘our future'. But are the distressingly large sunk costs of the past clouding the Harmony board's judgment on the future costs and benefits of continuing to operate the mine?

Lonmin has already been bailed out twice by its shareholders over the last seven years. As shown in Graph 2, the company's issued share capital has expanded from 156 million shares in 2008 to 584 million shares today – largely as a result of capital raises in 2009 and 2012. Despite the influx of new capital its annual production of platinum group metals has declined, and it is, by its own admission, not investing enough today to sustain production. The company's total market capitalisation has dwindled to less than R2 billion, a fraction of its 2007 peak of R94 billion, and also a fraction of just the new capital of R11 billion injected by shareholders in 2009 and 2012. With the benefit of hindsight, fund managers should have written off their initial investment in Lonmin as a sunk cost and declined to provide any new capital to the company. Should they offer Lonmin a third bail-out if the company asks for more capital? This will prove hard to justify unless one is confident of a drastic improvement in the company's operations or in platinum prices. 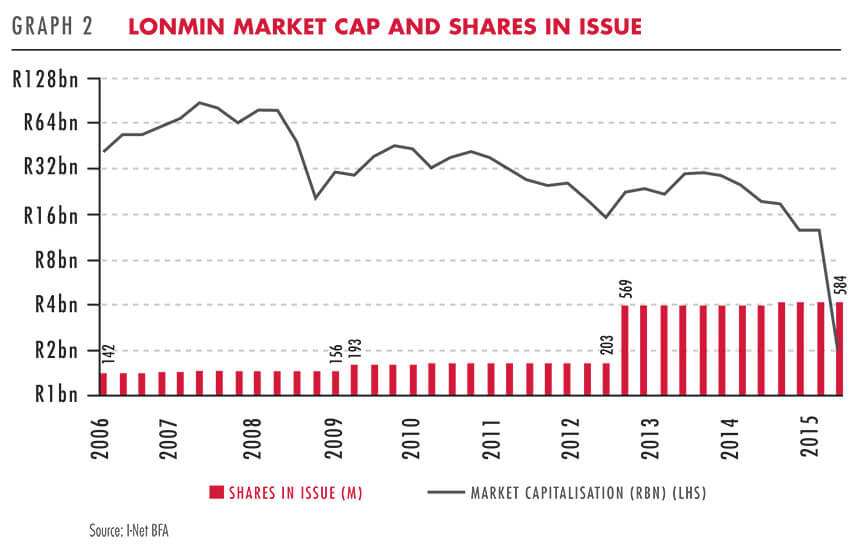 Glencore recently provided an example of walking away from sunk costs by allowing its Optimum Coal subsidiary to be placed into business rescue. Glencore bought Optimum at a valuation of R8.5 billion in 2011, and then advanced over R900 million to the company from September 2014 to fund its losses. It was clearly hard for Glencore executives to admit defeat in such a public way, but they may well have made the best decision for their shareholders. Will we see more mining companies in South Africa following Glencore's example? Of course, estimating a South African mine's future costs and benefits is made very difficult by volatile commodity prices and exchange rates, the operational gearing inherent in a mining business, and policy uncertainty, amongst other factors. Thus a decision on whether to pump more money into a loss-making mine, or to walk away from it, is fraught with uncertainty.

Shareholders and management could arguably improve the quality of their decision-making in such circumstances by considering the following:

1. Closing a loss-making shaft or mine does not merely save the company from future losses, it also reduces supply to over-supplied commodity markets. Reduced supply may result in higher commodity prices (or a weaker rand), which translates into incremental profits in the mines that do survive. If Lonmin stops producing, that would be good for platinum prices and for the remaining platinum mines. Fund managers who argue that current platinum prices are unsustainably low should be careful not to frustrate their own arguments by providing even more capital to keep the high cost producer in business and the platinum market over-supplied.

2. Closing a mine is terrible for the mine's employees, their dependants and the surrounding communities. The tragedy is made even sadder by the unfortunate fact that when some mines are closed, it becomes far less likely that the remaining unexploited resources in the mine will ever be mined again, and these resources could arguably be mined for the profit of the country, its people and the mining companies for many more years if we had a more favourable policy environment for mining. But we don't and there is little evidence that it will improve in the near future. In that case, why should savers and pensioners (whose investments are exposed to these mines) have to bear the cost of delaying the inevitable?

3. In one sense, the honouring of sunk costs in decision-making is rational for people if it allows them to save face and not admit to their past mistakes. This is particularly true for people acting as agents (such as company directors and fund managers). We should all try our hardest to put aside personal ego and make decisions in the best interests of the principals we represent.

Making investment decisions pertaining to South Africa's beleaguered mining industry requires wisdom and courage. We don't profess to have all the answers. We have made some good and some poor investments in mining companies in the past, and despite our best efforts we will probably not have a 100% success rate in the future. But we can certainly promise not to honour sunk costs and to put Allan Gray clients first in all of our decisions.

Ian joined Allan Gray in 2001 as an equity analyst after several years as a management consultant. He managed a portion of client equity and balanced portfolios and was the chief investment officer from 2008 until 2016. He is now chairman of Allan Gray Proprietary Limited and is a Chartered Financial Analyst.

“It ain't what you don't&nbsp;know&nbsp;that gets you into trouble. It's what you&nbsp;know for sure&nbsp;that just ain't so.” Mark Twain

Orbis: The power of perspective

It is easy to get caught up in the noise of short-term events like politics. What we have learned over the past 30 years is that a long-term view often revea...

Is your trust in your investment manager well placed?

It has been a volatile six months in the markets, following a five-year period of disappointing equity returns. At times like these, it is understandable for...

Wildfires in Australia, mass protests in the US, a global pandemic. These are just some of the events that have roiled markets this year, leaving investors...