Investing in platinum or palladium directly is taking a view that the prices of these commodities will increase. Tim Acker explains why we currently prefer this approach to buying shares in mining companies that produce these metals.

An investor buying shares of South African platinum companies 10 years ago and holding them until 2015 would have earned a return slightly less than inflation and significantly less than that of the overall market. The poor performance of platinum mining shares is despite the rand price of platinum and palladium, the two most important platinum group metals (PGMs), increasing dramatically over this period, as shown in Graph 1. 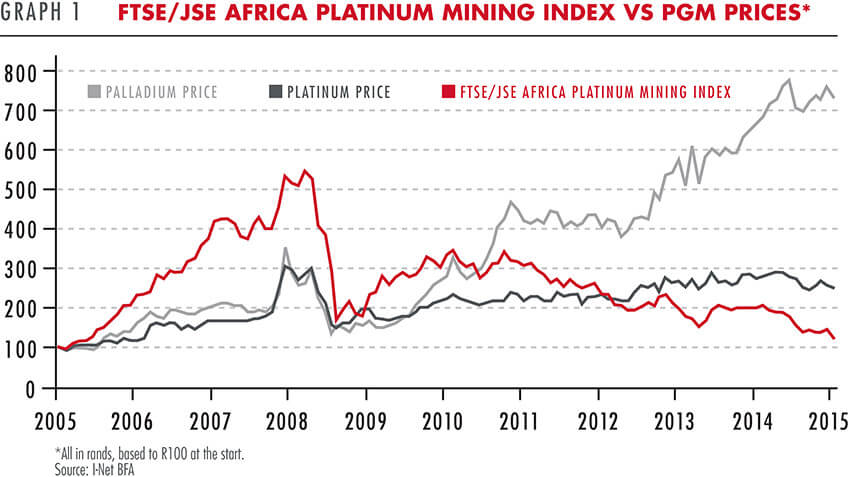 Today, unlike in 2005, investors have two ways to get exposure to the sector:

In some ways analysing an investment in commodities is very different from buying shares in a company. Bars of precious metal do not generate revenue or pay dividends, so how does one determine the intrinsic value? As is the case with any asset, price is determined by supply and demand. Here we can apply our normal fundamental research process.

Our investment case for platinum and palladium is based on the belief that demand will grow faster than supply and the cost of supply will continue to increase. Short-term price movements may be unpredictable, but we believe that backing these fundamentals will lead to a favourable outcome for the patient, long-term investor.

Platinum and palladium have a variety of industrial uses, including in catalytic converters for vehicles, and overall demand is growing. PGMs have unique properties that catalyse the conversion of harmful pollutants emitted by vehicles into less harmful carbon dioxide and water vapour. Global vehicle sales are growing as people in developing countries become richer and more likely to buy cars. Increasingly strict emissions standards are requiring car manufacturers to use more PGMs in each catalyst.

Jewellery is another important, but fluctuating, component of platinum demand.

Global mining supply of platinum and palladium peaked roughly a decade ago (see Graph 2). It is interesting to compare this with South Africa's gold production, which peaked in 1970. In the subsequent 45 years, SA gold production volumes have declined by more than 80%, but production from various other countries has more than made up for this decline. Contrast this with platinum: SA's mineral-rich Bushveld Complex region produces approximately 70% of the world's mining supply of platinum and contains an even-larger percentage of the world's known reserves. The Norilsk region in northern Russia produces approximately half the remaining platinum mine supply. As platinum supply is so concentrated, it is extremely unlikely that SA could be replaced as a source of supply.

The problem is that SA production is falling, mostly due to declining grades. The shallow and easy-to mine areas have mostly been exploited. Mining companies now have to go deeper and spend more money to retrieve fewer grams per ton of rock mined. The supply of recycled platinum and palladium has been growing, but even when this is included, the total supply of both metals is still in decline. 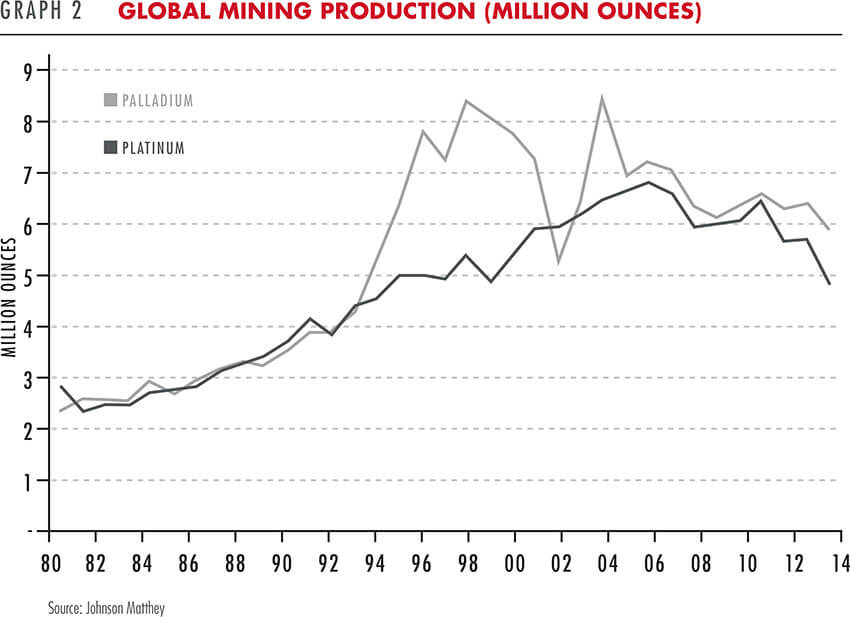 Over the past 10 years the cost to mine an ounce of platinum has increased, on average, by 15% per year, far in excess of the general inflation rate. This dramatic rise in costs has eroded the profits mining companies could potentially have earned from higher prices. Apart from the decline in grades discussed above, the chief culprits have been higher wages, declining productivity and pressure from government not to retrench workers. A high level of unionisation and inflexible labour laws suggest that above inflation wage increases are likely to continue. Recent examples of these pressures are the rise of the Association of Mineworkers and Construction Union (AMCU), increased inter-union rivalry and the five-month strike by approximately 70 000 platinum sector workers in 2014. As platinum mines become older and deeper they also need more maintenance and have increasing refrigeration and ventilation requirements.

At current PGM prices, less than half of SA's platinum mines generate enough revenue to cover cash operating costs and capital expenditures. As we don't expect costs to decrease, higher platinum and palladium prices are needed for the mining companies to break even and earn some return on their investments. What happens if prices do not increase? Mines can remain loss-making or marginal in the short term. Eventually, however, producers are forced to close lossmaking mines and cancel expansion plans (this is already happening). In the meantime, production gradually declines as current mines are depleted. The majority of SA mines will have to keep producing for global platinum supply to equal the (reasonably inflexible) demand. Effectively this means that rand PGM prices need to at least keep up with increases in SA mining costs.

As the past 10 years have shown, rising platinum and palladium prices are not necessarily enough to ensure good returns for shareholders of mining companies. Even if the next 10 years do turn out to be a good time to invest in mining companies, it would almost certainly be with the help of appreciating platinum and palladium prices. At a time when assets in most markets are generally expensive, we tend to focus more on the possible downside of investments. We see a smaller risk of permanent loss of capital in owning the PGMs rather than the mining companies.

Conversely, the potential upside of owning platinum mining companies may not be that big, as both labour and government seem likely to continue to make heavy demands on any economic profit generated by South African mines. Given this trade-off between risk and potential reward, we currently have a significantly larger exposure to platinum and palladium metals in our portfolios than to platinum mining companies (see Table 1).