The manufacturing sector is currently in a woeful state. Simon Raubenheimer discusses why we are where we are.

'The Board of Directors has taken the decision to conclude operations at Giﬂo Engineering (Bophuthatswana) (Pty) Ltd ("Giﬂo").

The decision was made on the back of poor margins and a labour dispute with NUMSA which has resulted in a labour strike which started on the 12th of January 2015 and is still currently ongoing.

The strike has been incredibly violent with a number of our working staff and staff of our suppliers and customers being hospitalised. Our trucks, as well as those of our suppliers have been damaged, working staff houses have been set alight and the factory has been brought to a halt as a result of the strikers stoning all vehicles in the vicinity of the Giﬂo factory and cutting off the company's water supply.

The company has reserved its rights against NUMSA and has obtained a court interdict to allow it to operate unhindered, something which is easier documented in theory than it is in reality.'

The deindustrialisation of South Africa

South African manufacturing is in a perilous state. Manufacturing's contribution to South African GDP has fallen from 24% in the early 1980s to 13% today, as shown in Graph 1. The number of people employed in the manufacturing sector has reduced by over 25% over the same time period. 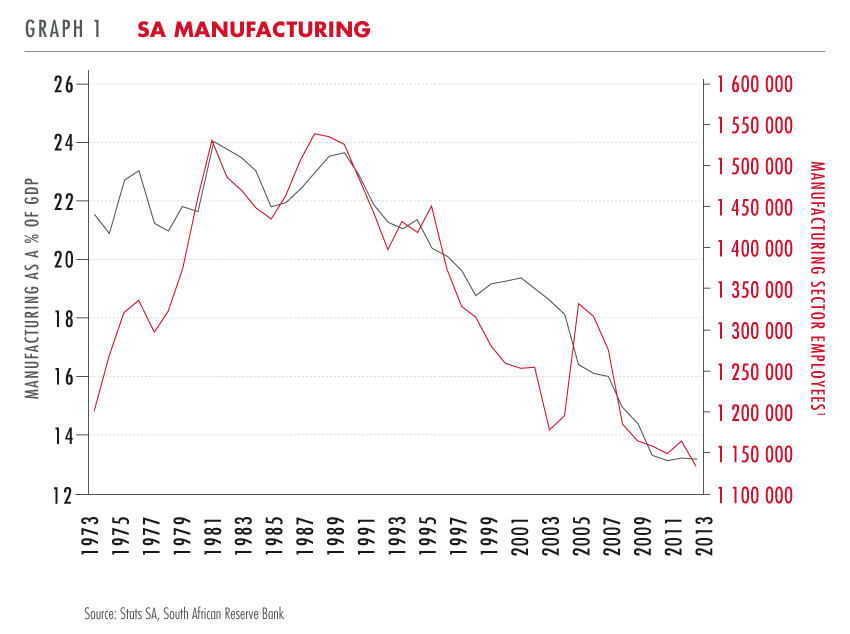 Various dynamics have contributed to the deindustrialisation of South Africa. Some are complex and deep-rooted - going back almost a century, when South Africa adopted a policy of import substitution as a vehicle for economic development in the 1920s. Complicated tariff structures, high tariff walls, duties and quantitative restrictions were enacted to protect and nurture domestic industries. Our isolation under Apartheid made things worse and by the end of the 1980s, South Africa had the most tariff rates, the widest range of tariffs and the second-highest level of tariff dispersion among a range of developing countries. Decades-long trade protectionism left many South African companies bloated and inefficient.

Post-Apartheid era trade liberalisation exposed these inadequacies, as many manufacturing businesses found it hard to adjust to a more open economy. Since the early 1990s, the performance of South African manufacturers has been cyclical and patchy, subject to the whims of exchange rates, commodity prices and foreign (particularly Chinese) demand, amongst other factors.

A whole host of challenges

A confluence of long-standing and recent challenges has made the last few years particularly painful. Unfolding against a backdrop of already weak infrastructure spending in South Africa, these issues reinforce themselves through a negative feedback loop:

Throughout history, manufacturing has been the pathway for the development of nations

The travails of South Africa-focused manufacturing businesses are echoed in the stock market. Many listed businesses have disappeared altogether: AG Industries, Dorbyl, B&W Instrumentation, Control Instruments, Racec, Alert Steel, Brikor, Protech Khuthele, Sanyati and Sea Kay to name a few. The remaining SA-only manufacturers have mostly lagged the FTSE/JSE All Share Index (ALSI). Companies exposed to the metals and engineering sectors - collectively accounting for one-third of South Africa's manufacturing sector - have fared particularly badly, falling by between 50% and 100%, while the market has risen more than two and a half-fold since 2008. Evraz Highveld Steel, South Africa's second biggest steelmaker, applied for business rescue in April.

It is hard to imagine that Aveng, Arcelor Mittal and Murray & Roberts were among the top 40 'large-cap' companies on the JSE as recently as 2008. Today, having fallen by over 90% from their highs (see Graph 2), they are classified as 'small caps', too small for the top 100 'mid-cap' shares by market capitalisation. If one added the three companies together, the combined entity would have to grow almost threefold to qualify for the ALSI 40. A standalone Aveng would have to be 15x bigger! 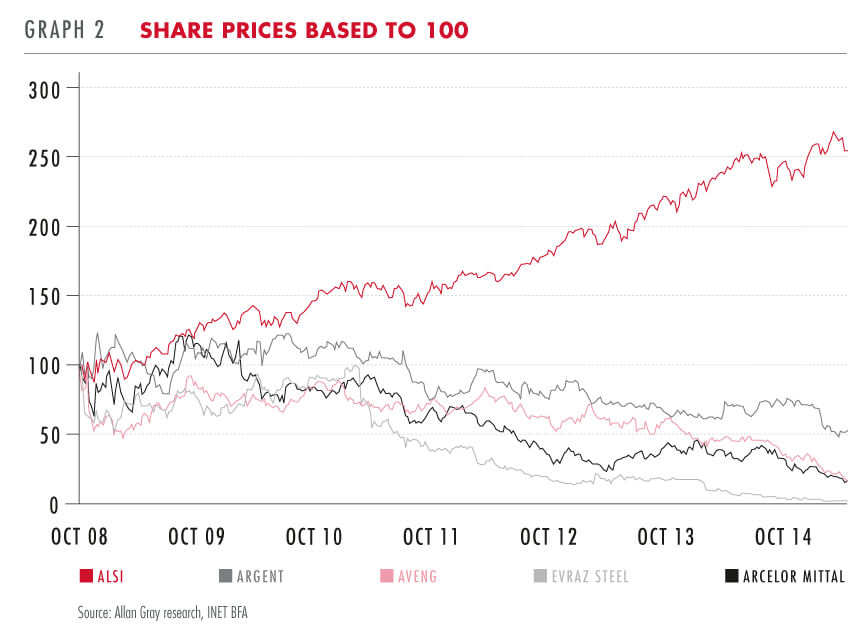 Argent, Aveng, Arcelor Mittal and Hulamin are currently priced at discounts of between 45% and 75% to the claimed value of the net assets on their balance sheets, reflecting the dim view taken by the market on these companies. By contrast, the average company on the JSE trades at a premium to its net asset value of 130%, as shown in Graph 3.

There is no easy cure for SA's manufacturing sector woes. Tackling the problems will require discipline and determination. Some issues will ebb and flow; some are permanent. It is pretty clear, for example, that real electricity price increases will remain higher than their historic averages for a long time even with our best collective efforts. It is equally difficult to imagine wages rising by less than inflation.

Manufacturers seem to agree. Where labour can be substituted with capital, one response of industrial South Africa has been to accelerate the rate of mechanisation: do more with fewer workers. Consumer food and goods conglomerate AVI has neatly arbitraged the gap between labour and capital productivity - it has managed to more than double its revenue over the past 10 years by doubling its plant and machinery, while only growing its workforce by 15%. Revenue per employee has risen by 90% since 2005; operating profit has risen fourfold.

Across the board, from steel, aluminium and cabling, to packaging, cement and industrial gas, employee numbers in listed manufacturing businesses have fallen-often by more than 30% - over the past few years. Many have not survived. Low return manufacturing businesses are closing down and big parts of certain industries are disappearing altogether. Over 80 000 jobs have been lost in the clothing and textile industries alone between 2002 and today.

The second major imperative among SA businesses is one of 'geographic diversification'. The desire to grow offshore is more widespread and fervent than ever. From the smallest of manufacturing businesses like infrastructure solution provider Megatron (a division of electrical manufacturer Ellies), to industrial manufacturing giants like Sasol, AECI and Nampak, construction-related companies like Murray & Roberts and PPC and food businesses like Tiger Brands, capital is being redirected to other parts of the world.

This trend is reflected in South Africa's capital account: after an already record year of outward-bound foreign direct investment (FDI) in 2013, South African companies stepped up their efforts another notch by growing their direct investments abroad by a further 17% in 2014, with no respite in 2015, as shown in Graph 4. Foreign investment into South Africa is falling by 23% per year, adding insult to injury. (As an aside, FDI into developing economies globally rose by 4% in 2014, indicating that we are batting well below the average.) 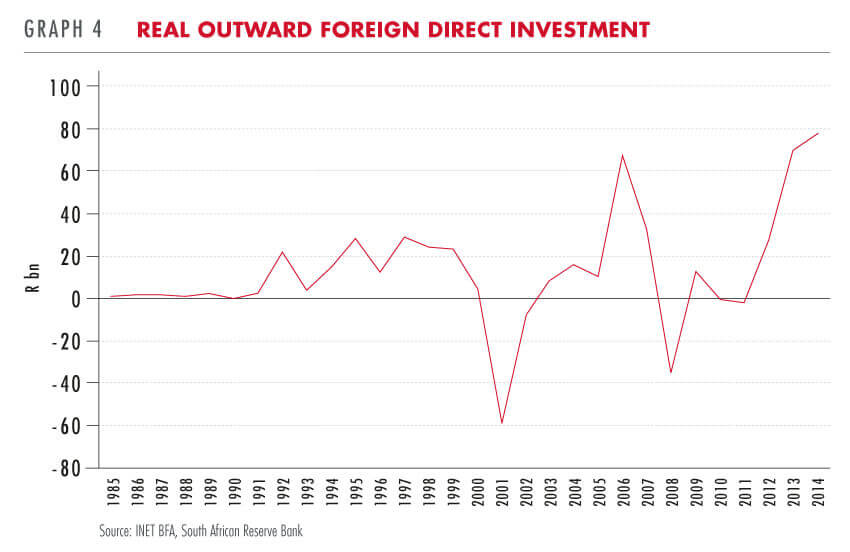 These trends do not bode well for the long run. As South Africans, we cannot spend and consume our way to prosperity. The gap between what we consume and what we produce has to narrow. South Africa desperately needs an environment that will facilitate more capital investment locally. In truth, the country needs to up its investment in fixed or productive assets (like factories, infrastructure and agriculture) by 30% - 50% to remain globally relevant. Lower-middle income economies around the world are investing 25% of their GDP in fixed assets; middle income economies more than 30%, on average. We are investing less than 20%. Improving our infrastructure would be one way to start breaking the vicious cycle that is plaguing SA manufacturing.

The manufacturing sector is important to South Africa given its upstream links to mining and downstream links to the infrastructure, construction and automotive sectors. Unfortunately manufacturing appears to be following in the footsteps of our mining sector. The share prices suggest permanent change: profit margins are not going back to where they came from. Plenty of businesses have gone under, and at these share prices, many of the remaining SA industrial businesses will find it hard to raise capital to grow locally.

Money flows to where it is treated best. Currently that appears to be in anything that can reduce employment or is located outside of South Africa. Innovation that reduces cost and improves efficiency is inevitable and should be lauded. But technical innovation and labour employment can be complementary. South Africa needs both.