Orbis: enthusiasm for the portfolio

Contrarian investing is a strange profession. When things are going well, you can look like a magician – earning extraordinary returns while others flounder. At other times, you can follow precisely the same process and look hopelessly out of touch. We have spent an embarrassingly large amount of time in the latter camp of late, says Ben Preston.

Over the past 12 months, only 30% of the Orbis Global Equity Fund’s capital has been deployed in shares that have outperformed our benchmark and – worse yet – our average losing share has contributed more in losses than the average winner has gained. Our only magic trick during this period has been an uncanny ability to turn gold into lead. In truth, there is very little alchemy to our approach, in either the positive or negative direction. The fluctuations in relative performance mask what is ultimately a rather solitary endeavour: studying financial statements and waiting patiently to purchase shares of good businesses at a discount. The challenge at times like this, as expressed so eloquently by Rudyard Kipling in his most famous poem, is to “meet with Triumph and Disaster/ And treat those two impostors just the same”.

Markets tend to do the opposite. Share prices, driven as they are by fickle human emotions of greed and fear, are far more volatile than the fortunes of the real companies they represent. Exploiting these emotional extremes is what enables the contrarian investor – with a focus on intrinsic value and a willingness to be different – to earn superior long-term returns.

Unfortunately, we don’t get all our investment decisions right. To be sure, our recent miscues have been costly, all the more so because they have come at a time when our value-oriented investment style has been out of favour. We recognise that we have tested your patience and lost the authority to simply say, “trust us”. But if you can allow us a bit of enthusiasm, we believe the value inherent in the portfolio increasingly tells a genuinely exciting story.

Our definition of a bargain lies in the “sweet spot” between price and quality – an above-average company trading at a discount price. In the market environment of the last few years – characterised by insatiable appetite for perceived “safety” – we have found such opportunities to be rare. Instead, the above-average companies have been expensive, while many of the discounted ones have been cheap for good reason.

Encouragingly, the stocks held in the Fund today are significantly cheaper than those in the World Index on several measures of valuation, such as price-to-book value and price-to-normalised-earnings, as seen in Table 1. What’s more, they are fundamentally better businesses, as demonstrated by historically higher profitability (return on equity) and faster growth rates in revenue and net asset value. 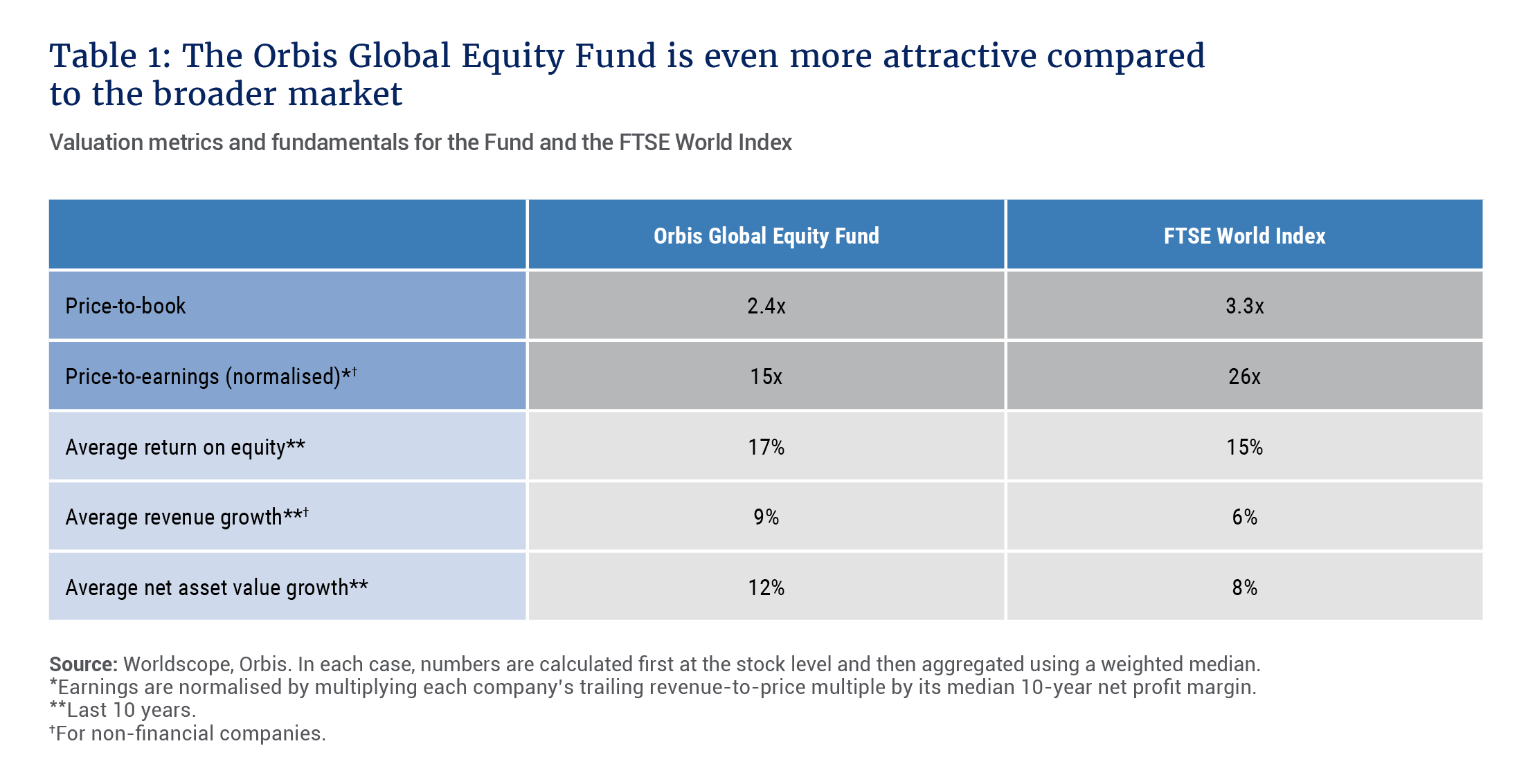 The investment case for Honda

To put this in more concrete terms, let’s take Honda Motor as an example. As one of the world’s best-managed car companies, it needs little introduction. At current prices, Honda’s valuation is trading below levels last seen during the global financial crisis. But what about self-driving cars? What about the trade war? What about ride-sharing and electric cars? What about …? While all these risks facing Honda are pertinent, our assessment is that they may ultimately prove to be overblown over our investment horizon. Instead of seeking to predict the future with certainty, our approach is to assess the full range of possible outcomes, and to compare those with the expectations embedded in Honda’s current share price.

The results are illuminating. When we last discussed Honda in late 2017, it traded at what was then a record low valuation of 0.8 times its tangible book value – the same level as during the global financial crisis. Remarkably, Honda’s valuation has fallen even further since then, and the stock is now trading below the levels seen during the crisis. At only 0.7 times tangible book value, Honda’s shares are trading at less than half their long-term historical average rating, and are embedding a significant destruction of value that we believe is wholly inconsistent with the company’s four-decade history of consistent profitability.

It is true to say that the transition to electrified vehicles will be a challenge for all carmakers, but it’s sobering to recall that – even some 15 years after Elon Musk founded Tesla – electric cars still only made up two out of every 100 cars sold globally last year. As for all the hype around ride-sharing, it’s easy to forget that the most common form of shared vehicles has been around for decades (we used to just call them “taxis”).

At US$45bn, Honda’s current market price seems to ignore its most attractive asset: Honda is the world’s largest motorcycle manufacturer, with a dominant (75%+) share in emerging markets such as Thailand, Vietnam, Indonesia and Brazil. It has consistently used its superior research and development capabilities to gain market share. Giving due credit for this gem of a business, one almost gets Honda’s car manufacturing business (with its US$100bn of revenues) for free. Such are the opportunities that become available when investors focus relentlessly on predictability.

being “comfortable” isn’t our goal; delivering superior risk-adjusted returns is

A look at the portfolio

Looking more broadly at the current portfolio, we see similar mispricings for many other high-quality businesses. For example, there are three China-related shares – NetEase, Naspers (Tencent) and Autohome – that stand out as highly profitable, cash-rich entrepreneurial businesses with above-average growth prospects. Together these comprise 18% of the total portfolio and more than half of the Fund’s emerging markets exposure, which at a third of the portfolio is near an all-time high.

Clients have often asked how we get comfortable with this positioning, particularly amid a raging trade war and protests in the streets of Hong Kong. Our answer is that being “comfortable” isn’t our goal; delivering superior risk-adjusted returns is – and the two things don’t always go together.

Investing outside developed markets is nothing new for us. We are well aware of the enhanced political, economic and governance risks; accordingly, we put significant emphasis on those considerations when researching shares in emerging markets. For example, we have hedged out the vast majority of our underlying exposure to the Chinese currency. But we’re also cognisant that the task at hand is not to “avoid” risk per se, but to handicap it appropriately and invest accordingly.

That’s not to say all of our stock selections will turn out to be great investments. But it is fair to say that the individuals managing your capital – and our own – are feeling significantly more excited about the portfolio today than we have been for some time. We remain humbled by your persistence and determined to earn your trust and confidence.

Ben joined Orbis in 2000. Based in London, he leads the Global Sector Investment team and is one of the stockpickers for the Orbis Global Equity Strategy. Ben holds a Master of Arts (Honours) degree in Mathematical Sciences from the University of Oxford and is a CFA® charterholder.