As bottom-up stockpickers, we don’t pay much attention to benchmarks or to what other investors are doing. Instead, our investment decisions are based on high-conviction beliefs that each individual stock in the portfolio is trading for much less than it is worth. While we firmly believe that this approach provides the best opportunity to deliver pleasing long-term returns for clients, it inevitably exposes us to the risk of underperformance at times when our best ideas perform poorly relative to the rest of the market. With this year being one of those times, Stefan Magnusson from our offshore partner, Orbis, explains that while underperformance is uncomfortable, it is an expected part of the cycle when you are a contrarian investor.

For the year to date, the Orbis Global Equity Fund (the Fund) has declined by 5.3% after fees, compared to the market’s return of about 5%. This underperformance was driven in part by stock selection. Our exposure to emerging markets more broadly has also weighed heavily on performance.

The headlines from China

The escalating trade war with the US is not good news. China’s economic growth trajectory had already been slowing down significantly from its remarkable three-decade average of over 9% per annum. While there is room for the government to stimulate the economy, higher overall debt levels and a desired rebalancing of the economy may temper such a response. Moreover, as the consumer of almost half of the world’s commodity production, a slowdown in Chinese growth may have far-reaching effects on commodity producers and other China-dependent industries.

But headlines don’t tell the whole story. At times like this, we look beyond the short-term noise to understand the likely impact on the businesses that we own in the portfolio. Assuming the fundamentals haven’t changed, periods of poor performance and low investor confidence can often give us the opportunity to invest in high-quality companies at depressed prices.

We believe that’s exactly what’s happening today. This can be seen by taking a closer look at the Chinese video game developer NetEase, which has been one of the Fund’s largest performance detractors in recent months.

We believe NetEase’s earnings are resilient to the Chinese economy as its games have a loyal user base. Additionally, NetEase’s games are a relatively cheap form of entertainment and as such are not likely to be the first purchase that users cut back on in an economic slowdown.

Along with broader concerns about the economic slowdown in China, uncertainty about online gaming regulation has recently spooked investors. China’s gaming regulator is undergoing a restructuring and has not approved any applications for new games since March this year. At the same time, other government bodies are pushing to manage the time minors spend playing games. The impact on NetEase’s share price has been painful. Its shares have declined by close to 40% from their peak in December 2017 in US dollar terms. Investors fear this heralds a wave of tightening regulation that would harm leading game companies.

We disagree. Discussions with a number of industry stakeholders suggest that the government is not aiming to suppress the gaming industry, and the relevant agencies are expected to resume approving games in a number of months. In the meantime, NetEase is largely insulated from the halt in approvals as its flagship franchises have already been approved and operating for years. We also note that the company has astutely navigated similar regulatory changes over the past decade, and we are confident that it will successfully navigate them this time as well.

Our confidence is in large part driven by the stewardship of William Ding, the company’s founder, who is focused on creating long-term shareholder value through a relentless focus on product differentiation, continuous improvement, and dedicated investment in research and development.

Most recently, NetEase has spent a lot of money moving into new game genres as well as expanding overseas, with notable success in Japan. The company has also continued to invest heavily in new areas of ecommerce, music, and online education. While this increased spending has depressed margins in the short term, we believe it has seeded a promising pipeline of future earnings streams which the market has all but ignored. The music business, for example, has over 400 million users. And the ecommerce businesses, though not yet at scale, grew revenues by 75% in the 12 months to June 2018. In short, we are very excited about the potential of these businesses.

What are we paying for this potential?

NetEase trades at 25 times our estimate of 2018 earnings, but we believe the company’s normalised earnings power is considerably higher. Today, the company’s market value is US$30bn. After deducting the US$5bn net cash it holds, NetEase trades at around 13 times the normalised earnings of its core gaming business. Moreover, we believe that these earnings should grow in future. In other words, we believe the games business alone will generate more in profits in under 13 years than the entire company is worth today!

[NetEase] has astutely navigated similar regulatory changes over the past decade, and we are confident that it will successfully navigate them this time as well.

That is very cheap for a business of this quality. For context, about 10 times earnings is what you might pay for a firm with cyclical profits, slow growth, and a levered balance sheet – not a consistently profitable, fast-growing company with billions in net cash. And this way of looking at the stock is likely conservative. If our analysis is correct, NetEase stands to earn significantly more than the profits of its gaming business as its new ventures begin to contribute in the years to come.

The current period of weakness reminds us of similar times in the company’s past when short-term pessimism created an opportunity to increase our position. Since we initially invested in NetEase 10 years ago, profits have compounded at a rate of 25% per annum, which is equivalent to doubling every three years. Essentially all of these profits have been converted to cash, with free cash flow matching, and often exceeding, accounting profits. The company has shared this success with shareholders both in cash – paying over US$1.5bn in dividends over the period – and in price appreciation, rising by an annualised 25% in tandem with its earnings growth. See Graph 1. 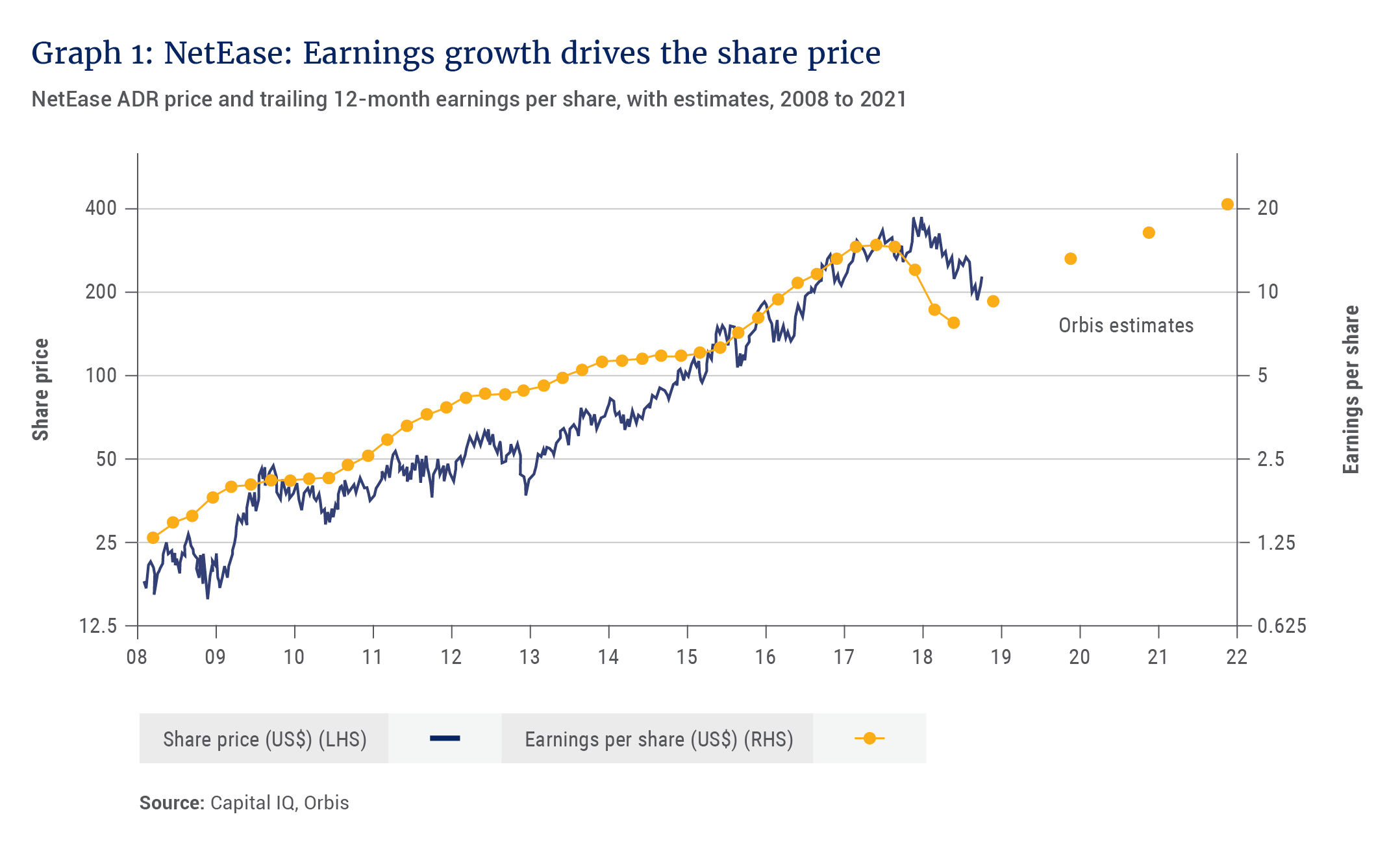 It is hard to say what lies ahead in the short term for NetEase – or for China more generally. We have learned the hard way that things can always get worse before they get better. But taking a step back, what matters most to us is guarding against the permanent loss of our clients’ capital and ensuring that your capital is positioned alongside ours in our highest conviction ideas.

Stefan joined Orbis in 2003. Based in Hong Kong, he leads the Emerging Markets Investment team and is one of the stock pickers who direct client capital in the Orbis Global Equity Strategy. Stefan completed his graduate studies at the University of St. Gallen and the University of Melbourne. He also holds a Master of Science degree in Business and Economics from the Stockholm School of Economics and completed the Advanced Management Program at Harvard Business School. Stefan is a CFA® charterholder.