The trouble with municipalities

The extensive infrastructure needs of South African municipalities provide an opportunity for long-term bond investors – such as retirement funds – to help finance these important, long-term assets. However, many municipalities have failed to meet the basic needs of their constituents, including providing adequate access to water, sanitation, housing and electricity. Consequently, faith in the system has been eroded, as reflected by the very low voter turnout in the November local government elections. The municipal sector needs a reboot for the overwhelmingly negative trend to be arrested, and this requires capable and honest leadership. Londa Nxumalo discusses.

The Auditor-General of South Africa minced no words in its latest report on local government audit outcomes, which have deteriorated markedly over the years. Although the downward trend in municipal health has been well documented in the press, the sheer extent of the rot is still alarming: Uncondoned irregular, unauthorised, fruitless and wasteful expenditure amounted to a whopping R189bn.

Ethical and accountable leadership is needed to turn these municipalities around

Only 28% of municipalities submitted quality financials for audit purposes and just 11% received clean audits, as shown in Graph 1. The Free State and North West provinces did not have a single clean audit between them. 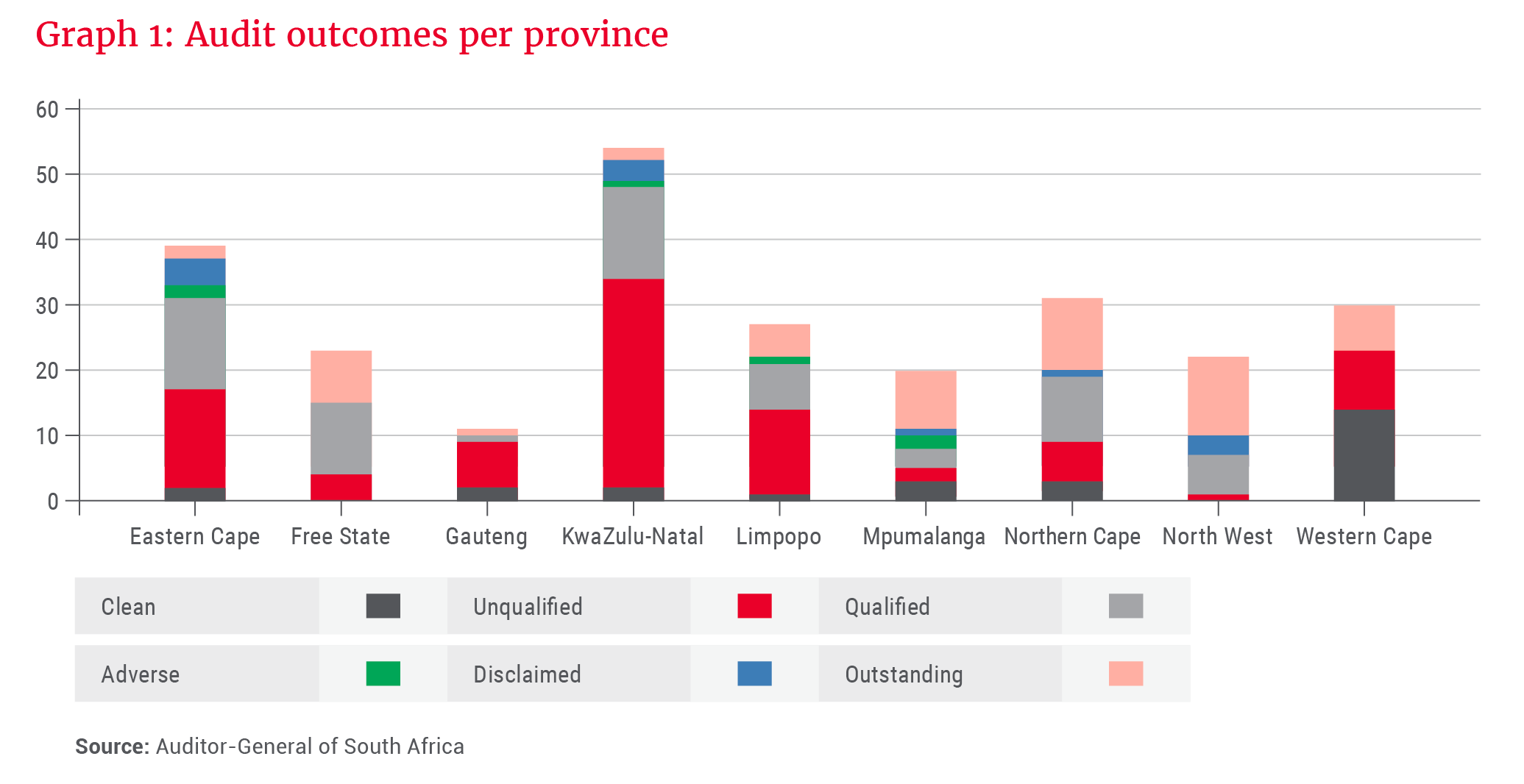 The Auditor-General’s report describes a death spiral: Rampant corruption and mismanagement at many municipalities result in a lack of funds and increasingly poor service delivery, the latter of which reinforces a culture of non-payment of municipal rates and service fees which, in turn, exacerbates the financial deterioration of the municipalities and further affects service delivery. Graph 2 reflects the concerning financial health of the sector.

Discouragingly, many of the issues plaguing municipalities have been raised by the Auditor-General in prior years, but the respective mayors and councils have not addressed these. The lack of consequences further reinforces bad behaviour and malfeasance. Ethical and accountable leadership is needed to turn these municipalities around.

On 16 July 2021, Moody’s downgraded five municipalities, including the large metros of Cape Town, Johannesburg, Ekurhuleni and Nelson Mandela Bay. Tshwane had already been downgraded to junk in June. In November, Nelson Mandela Bay and Ekurhuleni were downgraded again, with the latter falling to sub-investment grade. The ratings agency cited material revenue shortfalls and liquidity concerns, which are expected to persist, given the weak economy. The agency has also indicated that further downgrades may be forthcoming.

While the ability of households and businesses to pay their municipal rates and service fees has undoubtedly been impacted by the COVID-19 pandemic, this only partly explains the deterioration in the creditworthiness of local governments. Graph 3 shows various municipal ratings’ distance from the investment grade threshold, being the last notch before junk status (Baa3 or BBB-), which is 0 on the graph. In the case of Mangaung, Rustenburg and Ekurhuleni, credit rating downgrades had already started in 2019. 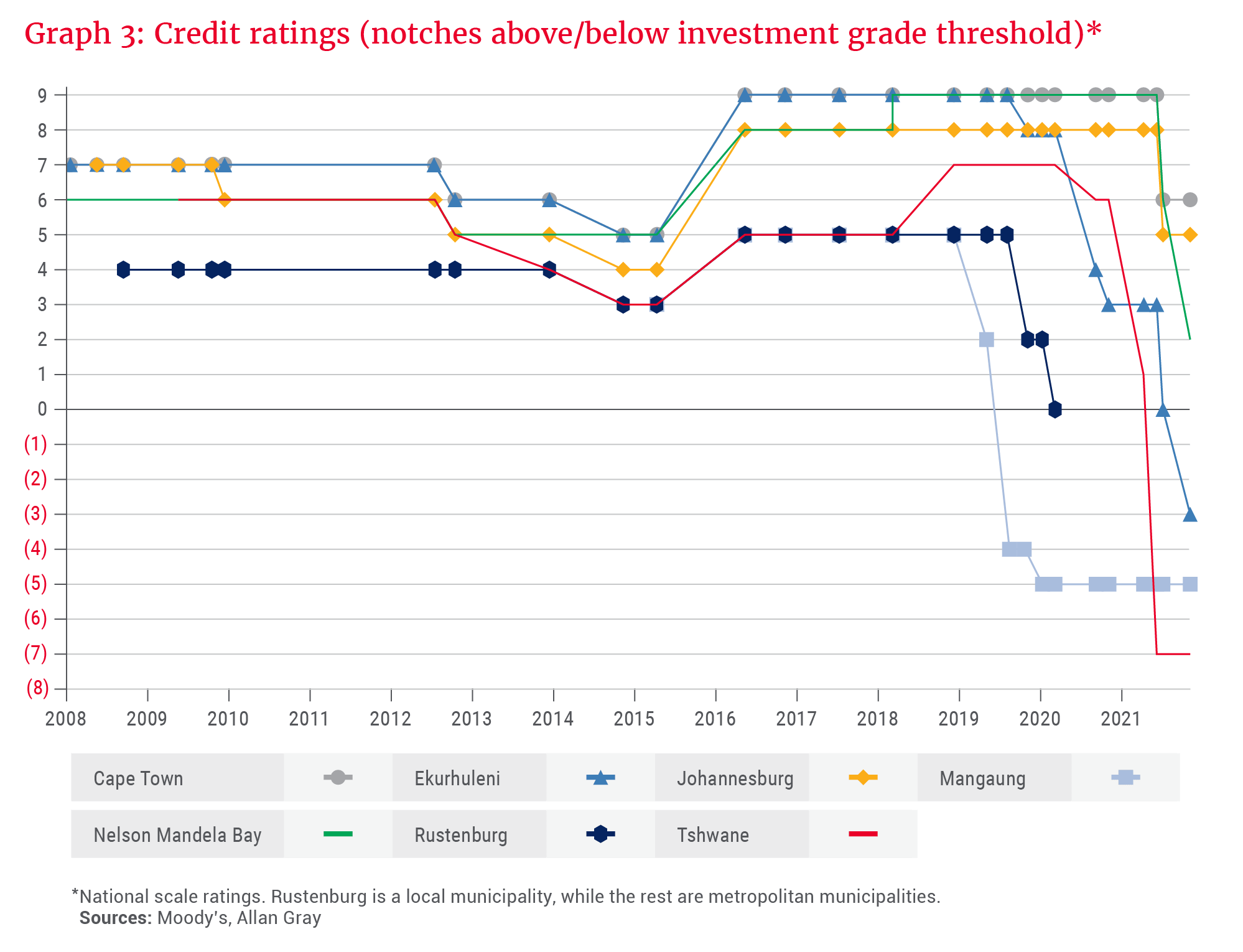 According to the National Treasury, total municipal borrowings were R68bn in March 2021, of which some 28% consisted of bonds. Lower credit ratings result in higher funding costs and may lead to some municipalities becoming uninvestable for conservative funds, such as retirement funds, whose mandates prohibit junk-rated investments. The end result is less funding being accessible for municipalities to spend on much-needed infrastructure for service delivery.

The fallout from failing municipalities does not only affect residents of that locale; municipal financial distress also has an impact on creditors such as Eskom, the water boards and smaller suppliers. The bearing on small businesses – which rely on prompt payment for their very survival and have been touted as a crucial source of jobs – is particularly egregious.

The amount of municipal debt owed to Eskom, and the debtor days outstanding of two of the large water utilities, are shown in Graph 4. Municipalities make up 42% of Eskom’s revenue, and municipal arrears have ballooned to R35bn. This non-payment affects the regular taxpayer directly: Bailouts from the fiscus to Eskom will have amounted to R136.7bn between 2020 and 2022. 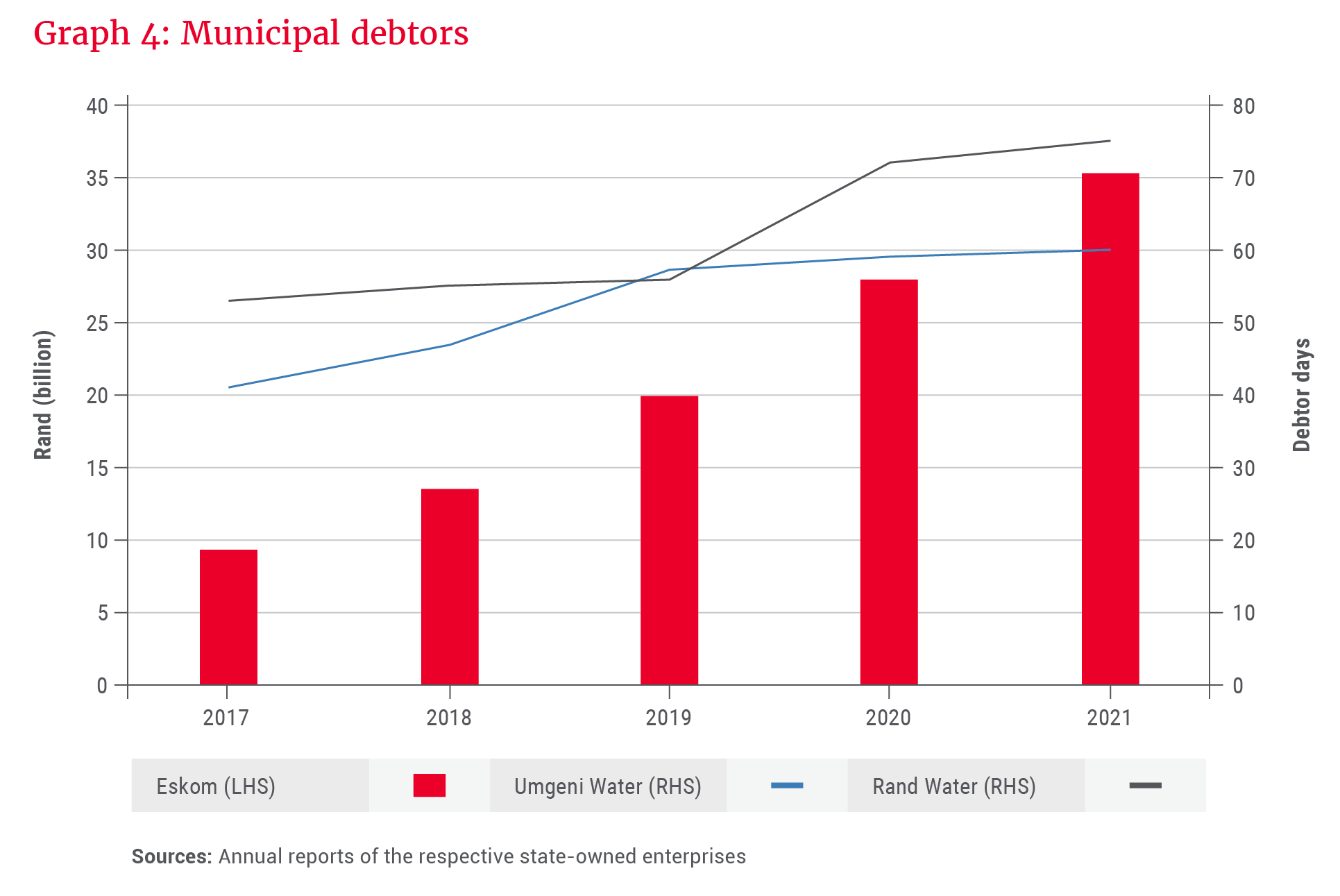 The water utilities derive almost all of their income from municipalities. Although the amount of overdue municipal debt to these (R377m to Umgeni Water and R1.9bn to Rand Water) pales in comparison to that due to Eskom, the upward trend in debtor days is not promising, and these entities may eventually need bailouts too.

A vote of no confidence

The basic services that municipalities are meant to provide are foundational to improving living standards, yet hardly a day goes by without a headline about municipal fraud, corruption, wastage and infrastructure degradation. Municipalities also often underspend on infrastructure due to poor project management, impacting service delivery.

In his letter to the nation ahead of the 2021 local government elections, President Cyril Ramaphosa wrote that public trust is easily lost and difficult to regain without accountability from public officials. It is therefore unsurprising that many municipalities have lost the trust of their communities.

The lack of public belief in municipal officials arguably shows up in poor collection rates, with the Auditor-General estimating that around 60% of municipal debt is irrecoverable.

The recent local government elections also saw the lowest voter turnout in the democratic era, at an effective 30% of the voting age population. A low voter turnout points to a loss of public belief in the electoral system, which has profound implications for social cohesion, as evidenced by the escalating number of protests and riots, shown in Graph 5. If a population loses faith in the electoral system, people will make their voices heard in other, more destructive ways. 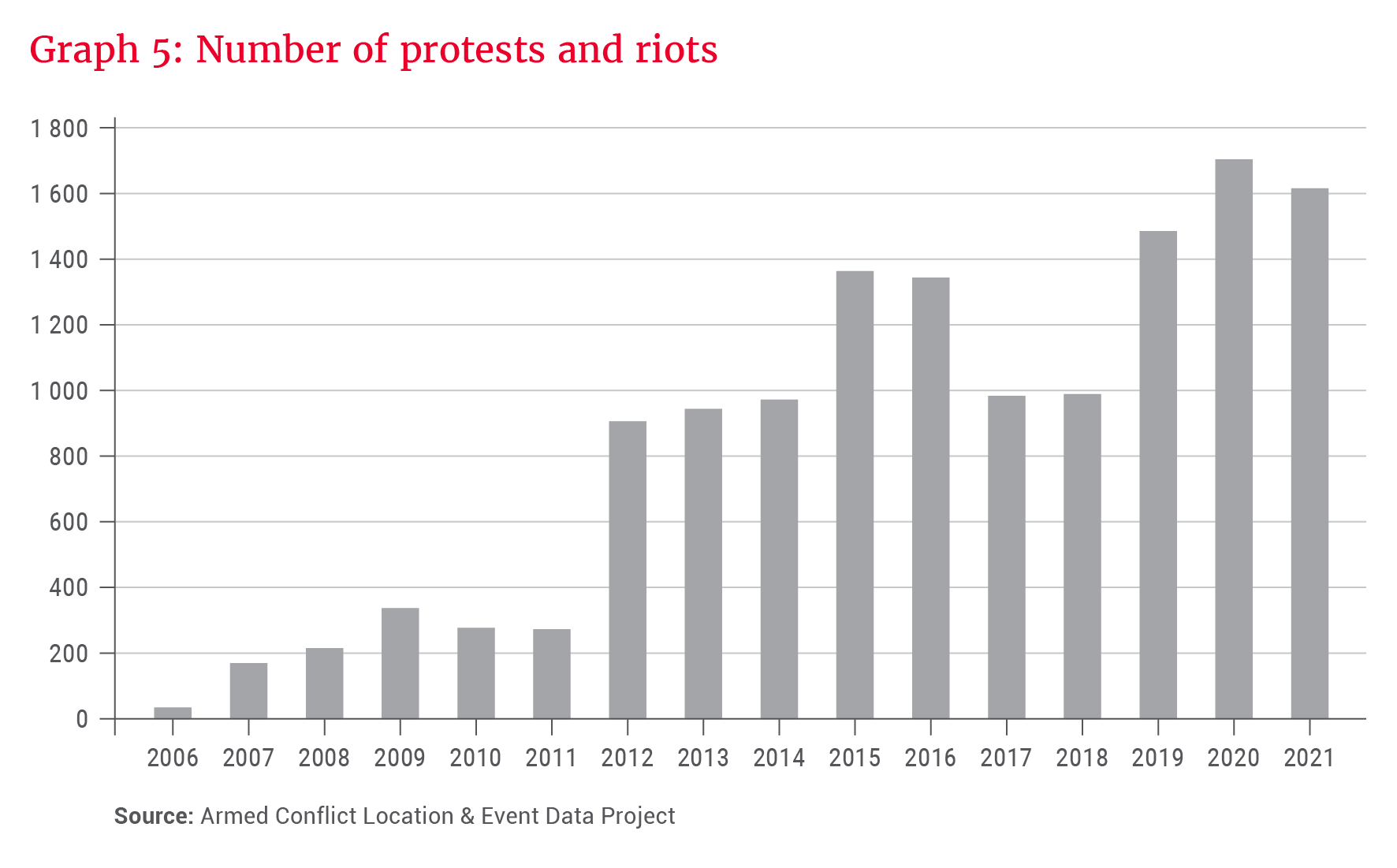 Leadership sets the tone at the top of any organisation. If leaders are unethical, have a disregard for sound governance and lack accountability, it filters through to the rest of the organisation and results in a culture of poor performance and impunity.

Many residents do not pay their fair share, while paying residents understandably become disillusioned when their hard-earned money is being wasted or stolen, and are tempted to stop paying their municipal bills. This inevitably results in municipal collapse. Indeed, a number of municipalities are already deemed to be dysfunctional.

Turning the situation around will require a delicate dance between two groups: leaders, who must drive the change, and residents, who must pay their bills. One cannot happen without the other, but the former clearly leads the latter.

Londa joined Allan Gray as a credit analyst in 2017 and was appointed as a portfolio manager in 2019. She manages the bond portfolio, as well as portions of the fixed interest component of the balanced portfolios and the Africa fixed interest portfolio. Londa holds a Bachelor of Accountancy degree in Financial Accounting from Rhodes University and a Master of Commerce degree in Development Finance from the University of Cape Town Graduate School of Business. She is a qualified Chartered Accountant.