Is it worth taking on a bit more risk to achieve potential return? Londa Nxumalo explains the relationship between risk and return in the fixed income context and discusses factors to consider when looking at the opportunities and threats across Africa. The situation in the developed market fixed income world looks very different to emerging markets, which Mark Dunley-Owen, from our offshore partner Orbis, unpacks in his article.

The relationship between risk and return is well documented. In short, investors should demand a higher return from investments that carry a higher risk. In fixed income, the potential for returns – in the form of coupons and capital gains – is captured by the bond yield (which is the coupon amount/price). A high yield signifies a high potential return. A high potential return generally comes with high risk, and therefore a higher yield would point to higher risk. Low return in itself can be a risk – but many investors seem to be ignoring this factor, opting for safety even if it means no yield. Because bond prices move inversely to yields, investors who buy bonds at abnormally low yields would be exposed to capital losses in the event that those yields normalise.

Graph 1 shows the hard currency yields of three developed countries and six major African bond issuers. There is a clear negative relationship between the credit quality of a country (the willingness and ability to repay interest and capital in full and on time) and the yield on its bonds. In other words, the lower the credit quality, the higher the yield.

Developed countries have better credit ratings (or lower credit risk) and therefore offer lower yields. These are often considered safe havens. On the other hand, the African countries offer increasing yields as the credit quality deteriorates. Zambia, which defaulted on its hard currency bonds in November 2020, offers the highest yield. Perhaps unsurprisingly, given the country’s upper-middle-income status, South African bonds are located between those of developed and those of other African countries.

Interestingly, the perceived credit risk does not map neatly to a country’s debt levels, as can be seen in Graph 2. With the exception of Zambia, all the African countries have a lower debt-to-GDP ratio than the US and the UK. But why are these countries seen as riskier despite having lower debt?

For all their risks, African bonds have historically delivered good returns for long-term investors

The answer lies in their debt-carrying capacity – that is, their resilience relative to their debt levels, which determines the extent to which they can repay debt despite setbacks. Developing countries tend to have more vulnerable economies and weaker institutions than developed countries, meaning a lesser ability to manage internal or external shocks such as adverse weather, sociopolitical upheaval, commodity price crashes, war, and many others. Because of this, most African countries simply do not have the buffers to handle the proportion of debt that developed countries can get away with. Although lower debt levels are a good thing, they are not enough. 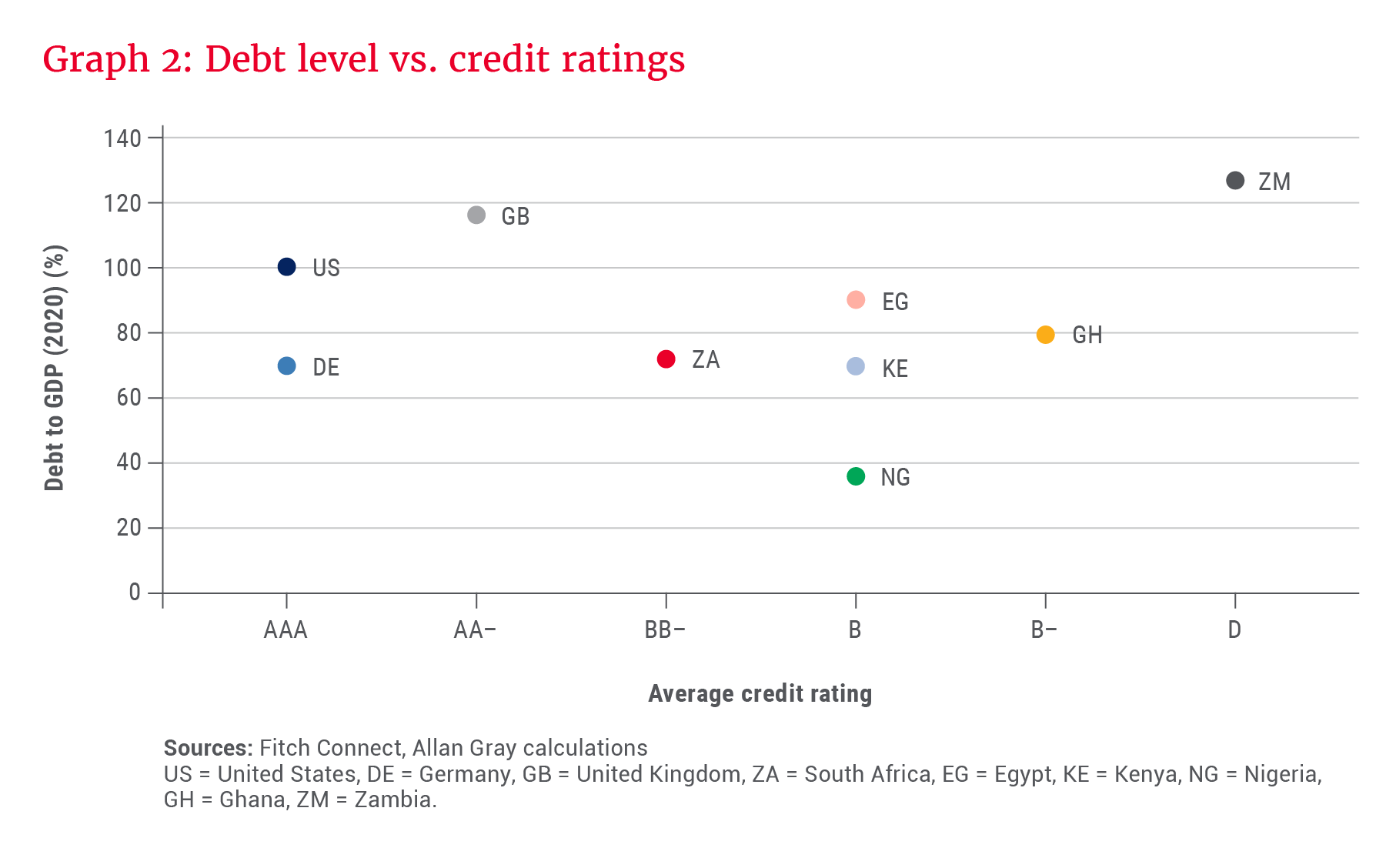 What about local currency debt?

So far, the key discussion points have been illustrated using foreign currency debt. Local currency debt is broadly subject to the same concerns and also includes others. Inflation can erode the returns on local currency fixed income instruments through its effect on the exchange rate. Purchasing power parity suggests that if two countries have different rates of inflation, the currency of the country with higher inflation will depreciate over time.

African countries tend to have higher inflation than developed countries, as can be seen in Graph 3. The reasons for this are manifold, and can include supply chain inefficiencies, central bank money-printing, and high import dependency with depreciating exchange rates. Given these countries’ higher inflation rates, it is therefore unsurprising that African currencies tend to depreciate over time, as shown in Graph 4. 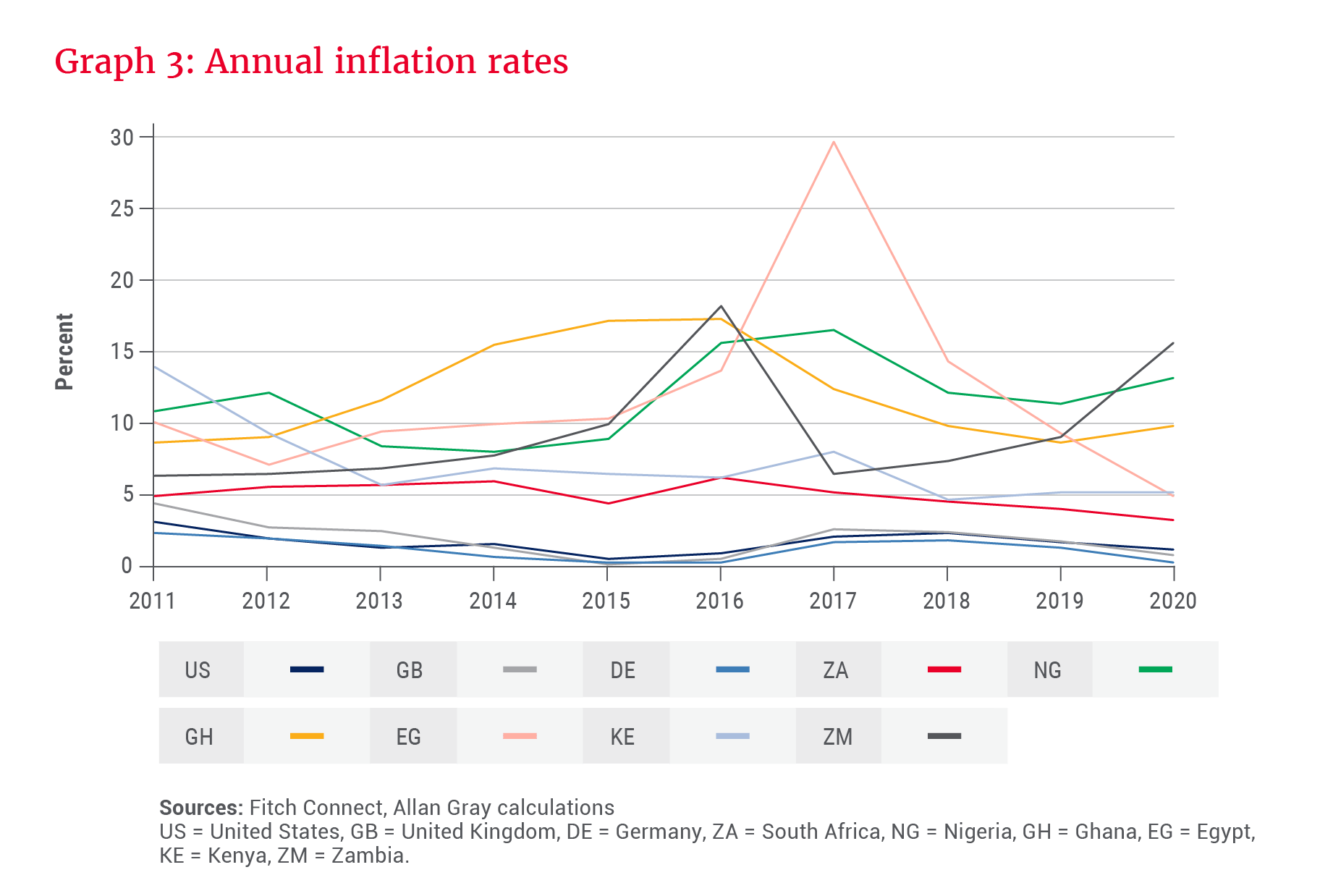 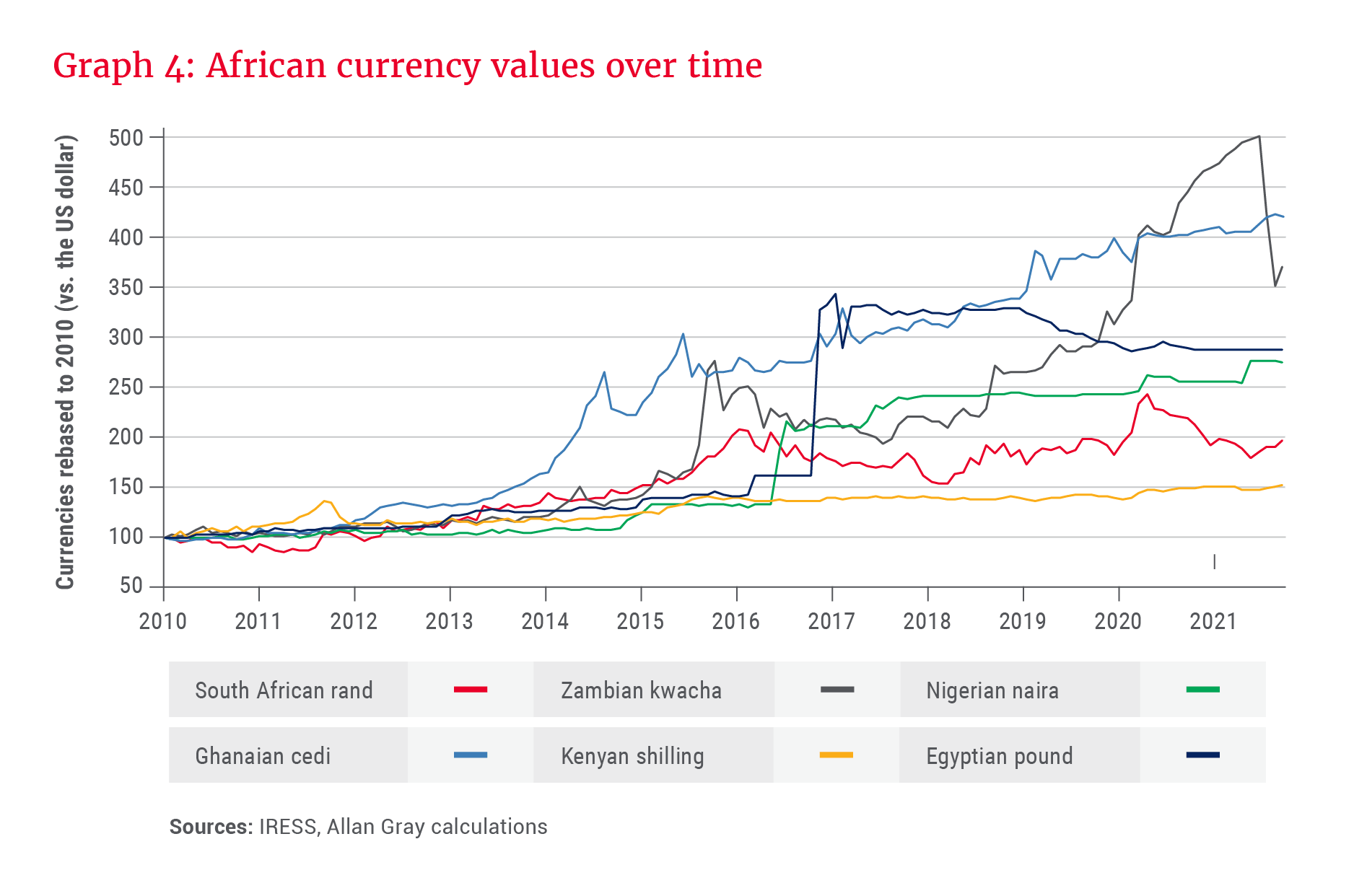 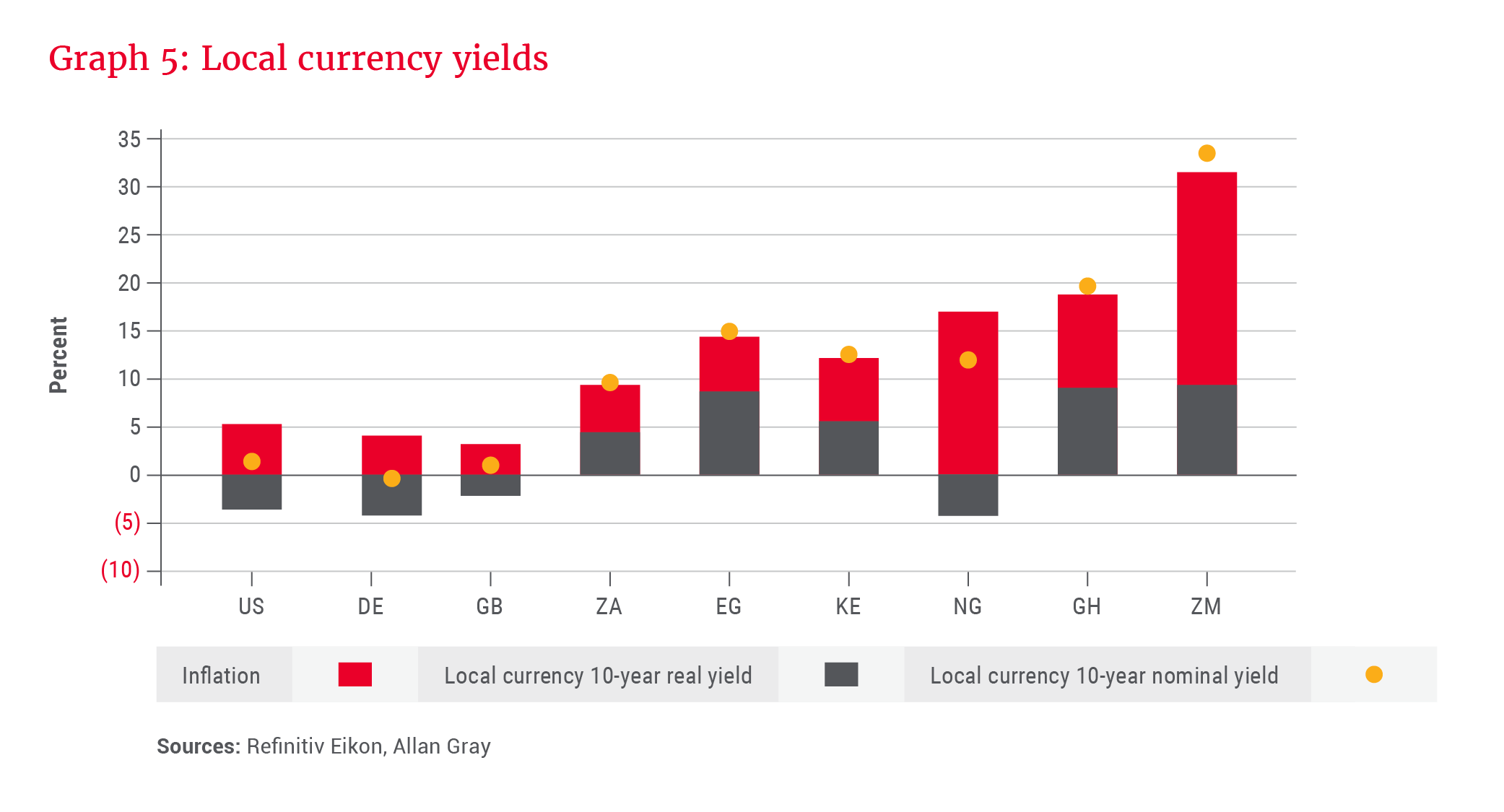 It is useful to look at Graphs 3, 4 and 5 in conjunction to understand the relationship between nominal yields, inflation and currency risk. For example, Zambia and Ghana offer the highest nominal yields, but historically have also had higher inflation – and their currencies have performed the most poorly. Nonetheless, both countries still offer attractive real yields.

Except for Nigeria, all the African countries offer positive real yields. The same cannot be said for the developed countries, which all have negative real yields – meaning that investors are not even being compensated for inflation. Mark Dunley-Owen, from Orbis, touches on this in his piece and gives an overview of how Orbis thinks about fixed income in a global context.

As mentioned earlier, South African bonds show up between those of developed and those of other African countries. In our previous Quarterly Commentary, Thalia Petousis offered a detailed description of how we navigate the South African fixed interest landscape. In short, we believe that long-dated bonds offer attractive real yields, albeit against the backdrop of elevated fiscal risks due to a moribund economy and historically high government debt.

Although sovereign bonds make up the vast majority of the African fixed income investment universe, there are some corporate issuers to be found. The case for corporate bonds hinges on sustainable cash flow compared to a company’s debt load.

Companies operating in developing countries often have a high cost of funding due to the real or perceived risks of operating in these jurisdictions. In the case of corporate bonds issued outside South Africa, the usual credit risks would be overlaid by the currency risk of the underlying instrument. Sovereign risk feeds into corporate credit risk as the sovereign’s actions impact a company’s ability to service debt through taxes, inflation, service delivery, capital controls and other policy consequences.

This makes sense in some ways. Libertarian economic theory asserts that private enterprises are better run than governments; better-run borrowers should carry a lower risk premium. Another reason why corporate yields have tended to be lower is structural: Sovereigns tend to issue very long-duration bonds (10 - 40 years), while corporates tend to favour medium-term bonds (less than 10 years). Longer-dated bonds have a higher yield because default risk rises over longer periods of time. 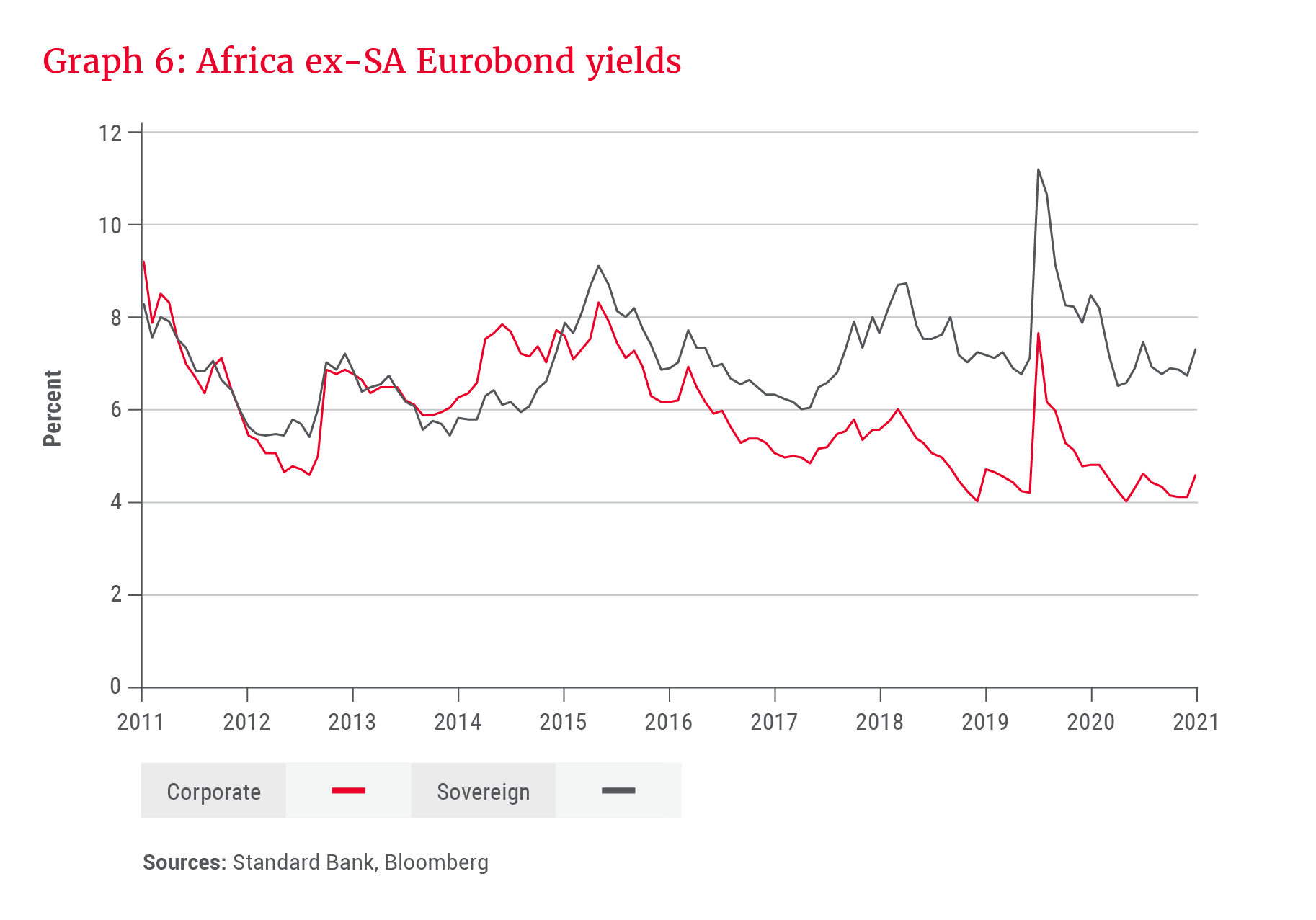 Graph 7 shows the annualised US dollar total rate of return (TRR) over five years until end September 2021 for medium-term African hard currency bonds and local currency bonds respectively. Zambian Eurobonds have delivered a positive TRR despite the government defaulting last year. This is a testament to the very high coupon rates often associated with riskier credits. Even South Africa has held its own, with the local currency bonds beating those of higher-yielding countries like Egypt, Ghana and Zambia. 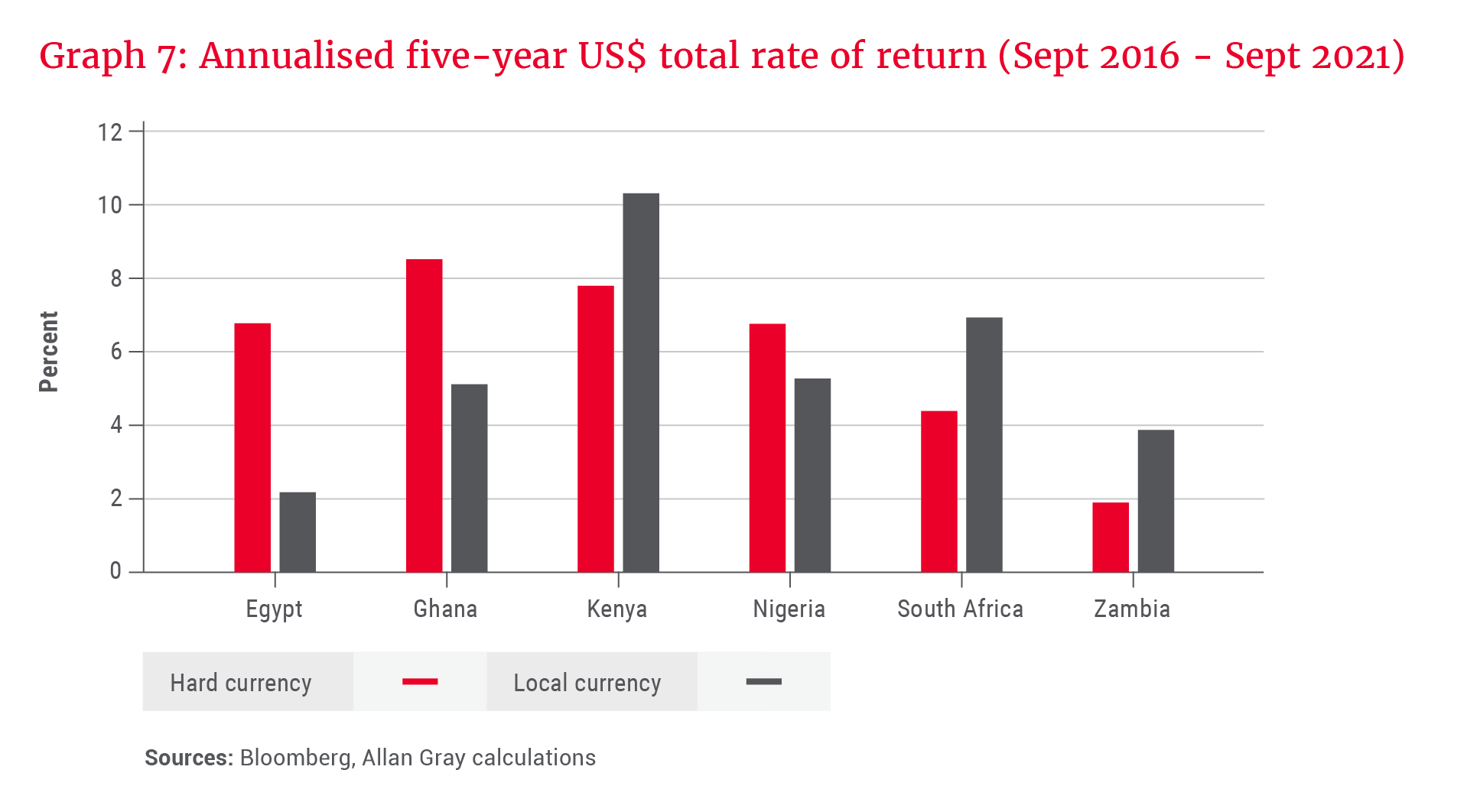 The Allan Gray Africa Bond Fund (“the Fund”) has delivered an annualised US dollar return of 7.5% since its inception in 2013. These strong returns have only been possible over the long term. The annualised volatility of the Fund has been 9.2%, meaning that sometimes returns can be negative. However, our long-term focus has enabled us to buy or hold instruments through market dislocations – with the Fund benefiting from the subsequent recovery, not to mention the high coupons that compound over time.

For all their risks, African bonds have historically delivered good returns for long-term investors.

Bonds in your portfolio

Fixed income makes up an integral part of any diversified portfolio. You can gain exposure to the asset class mainly through multi-asset funds or specialist bond funds. Funds that comply with Regulation 28 of the Pension Funds Act, which limits the extent to which retirement funds may invest in various assets, can invest up to 100% in bonds issued or guaranteed by the South African government, or up to 75% in any other bonds. Furthermore, Regulation 28 allows for 30% of a fund to be invested outside South Africa, with an extra 10% in Africa outside South Africa. These foreign investment limits can be used to invest in international bonds.

in a relatively risk-free investment, your returns may not keep up with inflation

If you prefer a building-block approach, you can invest directly in various bond funds. These can be local or foreign investments and are categorised according to their features. Some are based on credit quality, such as funds that reference the FTSE World Government Bond Index (WGBI), which is made up of investment-grade government bonds, including those of most developed countries and some emerging markets; other funds may have a specific geographic focus, such as emerging markets or Africa. Lastly, specialist bond funds may invest in local currency bonds, foreign currency bonds, or both.

How much exposure you should have to bonds, and which bonds you decide to invest in, depend on your goals and personal circumstances, as well as your ability to take on risk.

It’s important to understand the different types of risk, and which will impact you most. Remember that in a relatively risk-free investment, your returns may not keep up with inflation, so you will face the risk of your investment losing real value over time. For tailored advice, we recommend you talk to a good, independent financial adviser.

Londa joined Allan Gray as a credit analyst in 2017 and was appointed as a portfolio manager in 2019. She manages the bond portfolio, as well as portions of the fixed interest component of the balanced portfolios and the Africa fixed interest portfolio. Londa holds a Bachelor of Accountancy degree in Financial Accounting from Rhodes University and a Master of Commerce degree in Development Finance from the University of Cape Town Graduate School of Business. She is a qualified Chartered Accountant.

Economic recovery accompanied by a surge in inflation

With increasing vaccinations economic activity is returning to pre-pandemic levels and, while there may be further waves of infection, governments are learni...

On 17 October 2019, angry demonstrators took to the streets of Lebanon to protest a US$6 per month WhatsApp communication tax. Little did they know that the...

Prices are on the up in the wake of the COVID-19 pandemic. The question is, will deflationary conditions resume as global economic conditions normalise or is...

MPC rates decision: Where to from here?