Disappointing short-term performance has had a dampening effect on longer-term numbers. Looking at similar periods in our history provides useful context and some comfort, while understanding our current positioning reveals reasons to be enthusiastic about the future. Stephan Bernard and Radhesen Naidoo discuss the performance, positioning and prospects for our flagship funds.

Recent performance across our flagship Equity, Balanced and Stable funds (the funds) has been disappointing. As shown in Graph 1, the funds have underperformed their respective benchmarks over a one- and three-year period, with the Stable Fund behind its benchmark over a five-year period. However, longer-term relative returns remain pleasing, with all the funds beating their benchmarks and inflation.

Absolute returns have disappointed over the last five years, primarily due to poor returns from equities. This has resulted in the funds performing contrary to where one would expect in terms of their positioning on the risk spectrum, with Stable performing better in absolute terms than Balanced and Equity over this period. 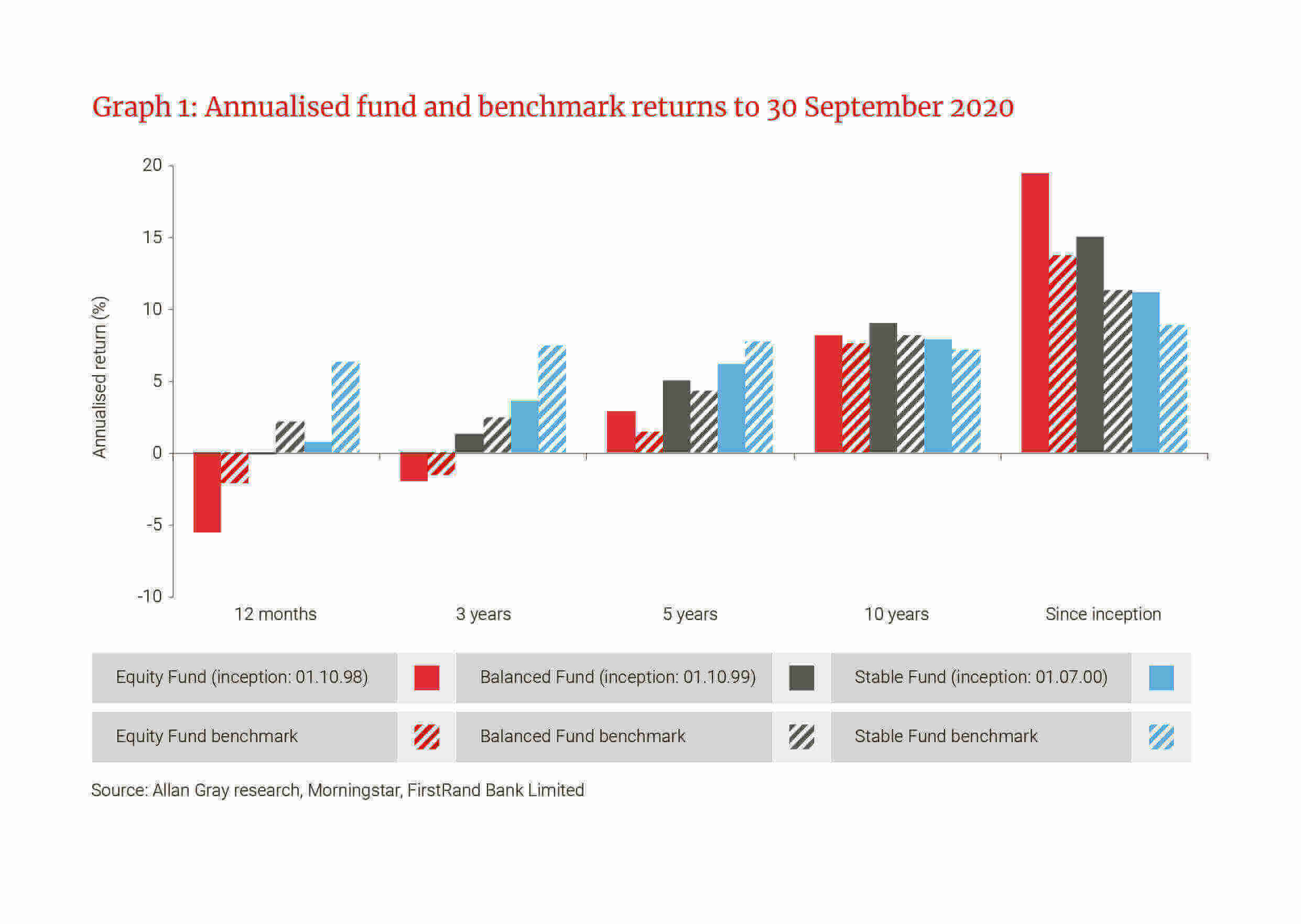 In contrast to prior periods of underperformance, investors today have not been rewarded with strong absolute returns from the South African stock market. Since Allan Gray’s inception, the FTSE/JSE All Share Index (ALSI) has delivered a total return of over 16% p.a. and there have been few disappointing five-year periods. This is in stark contrast to the 5% return delivered by the index over the last five years.

Why have returns been low?

Ignoring volatility, the market is at a very similar level to five years ago, as shown in Graph 2. This is despite Naspers’ extraordinary rally as domestically oriented businesses, in particular, have suffered. Similar to the US market, where large technology stocks have dominated returns over recent years, a small number of shares, including Naspers, Prosus, Anglo American, BHP and the gold miners, have driven the South African market. Some of these businesses rallied off a low base, like Anglo American, and others simply reached new highs, like Naspers. Indeed, if one excludes Naspers, the ALSI would be over 15% lower (as illustrated by the blue line). For foreign investors who consider the performance of stock markets in US dollars, the ALSI excluding Naspers is now back to levels last seen in 2009 (refer to the black line). 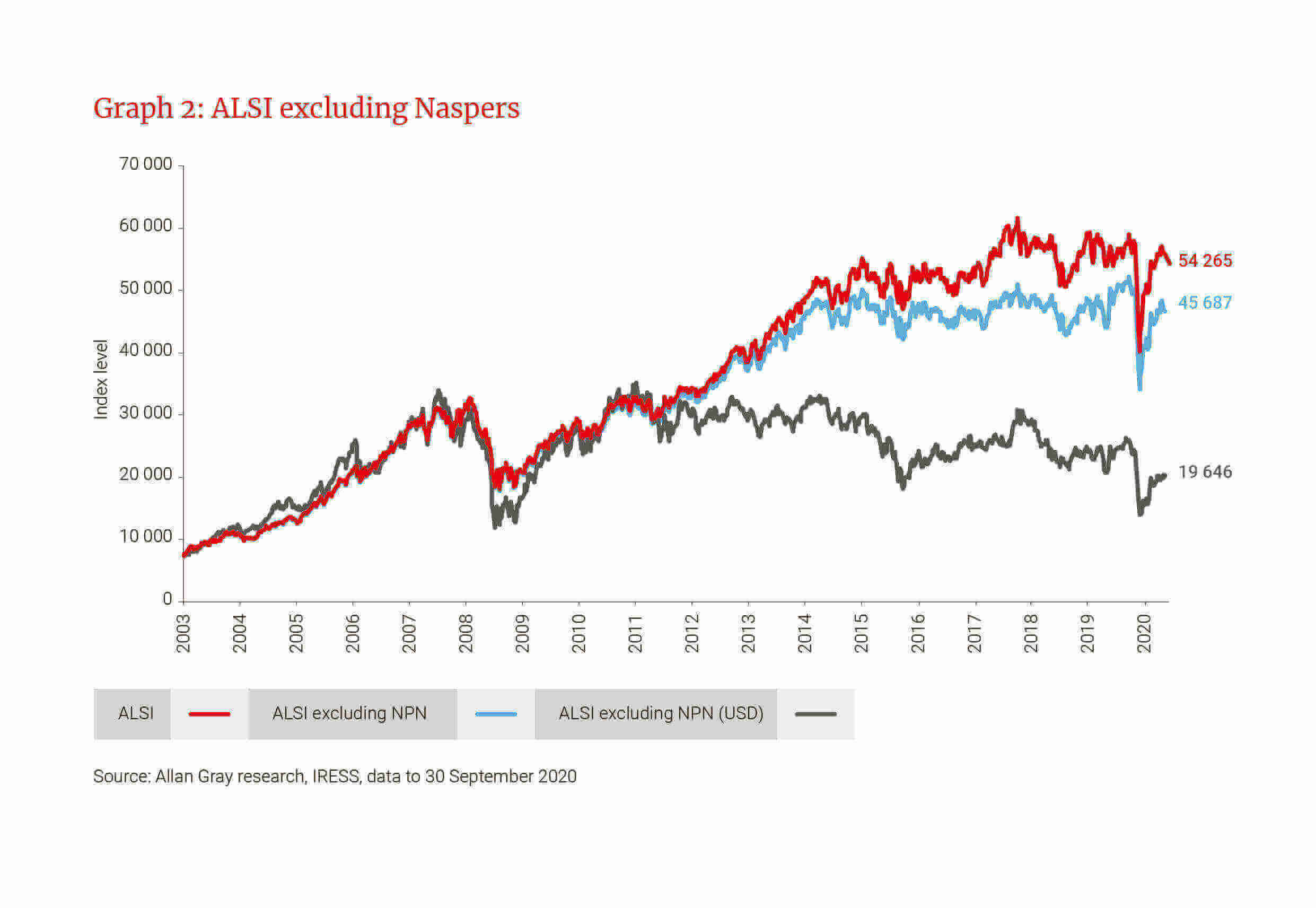 This was the case even before the COVID-19 crash, from which the recovery has been swift. In our view, the market was not expensive before the crisis and we were finding many opportunities. As a result, we had an above-average equity weight and low hedging in the Balanced and Stable funds; they were not positioned to offer optimal protection against the unforeseeable global catastrophe. While our market was not spared in the downturn, perhaps its subsequent rapid recovery supports the view that valuations were attractive ahead of the crisis.

Comparing the COVID-19 crash to the global financial crisis and the 2002/2003 crash presents an interesting result: Assuming you invested R100 five years before the peak of each crash, you would have had more money at the bottom of the GFC, and almost the same at the bottom of the 2002/2003 crash, than what you had at the peak of the market before COVID-19 (see Graph 3). In light of the lower starting valuations today, and historic price performance, stronger returns over the next three to five years are not implausible. 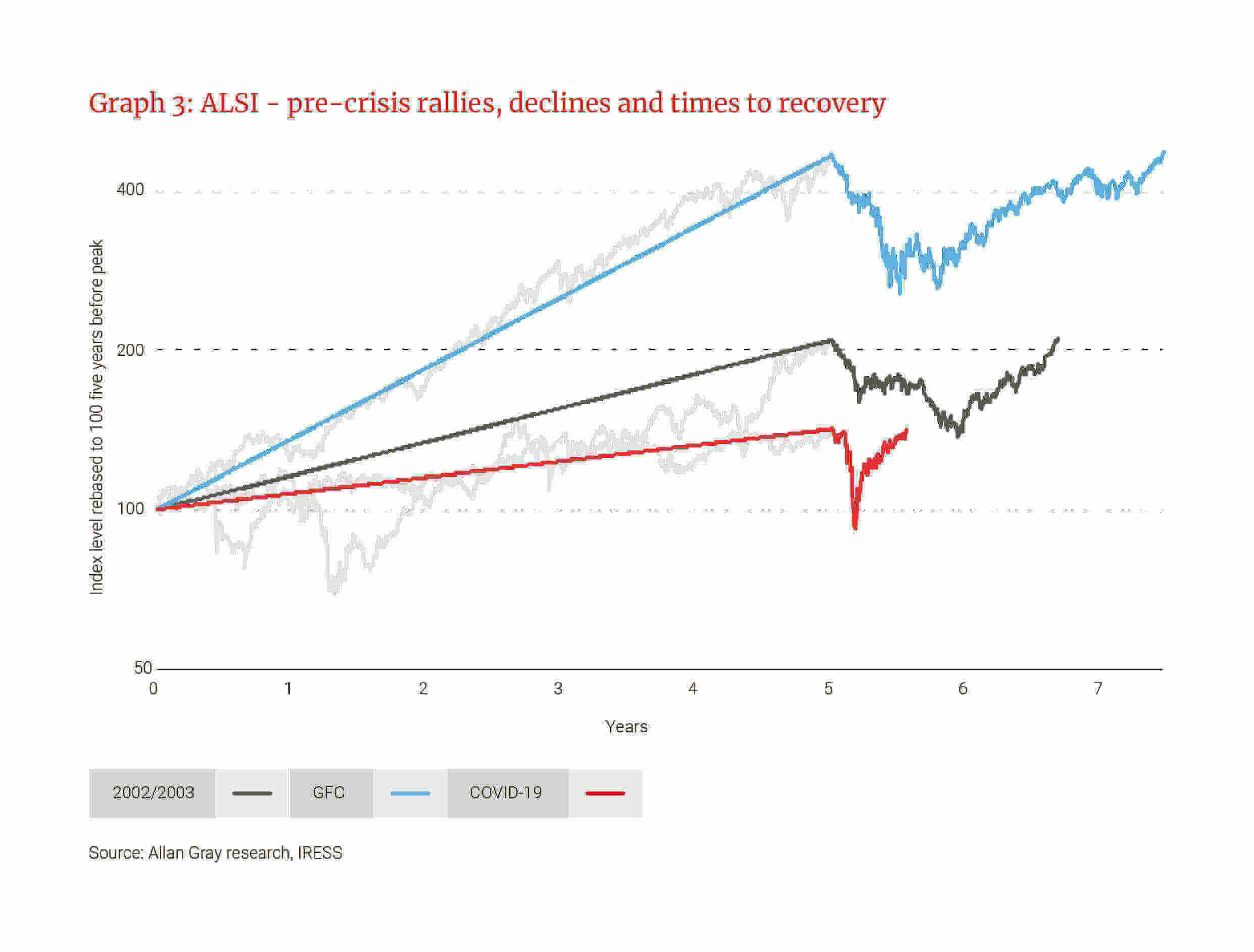 Most of our historic outperformance stems from protection in down markets (column F of Table 1), rather than strong outperformance in up markets. It was therefore disappointing that we did not protect capital better in this period. This is not entirely unusual, as column F also shows. The market has experienced 10 significant drawdowns since Allan Gray’s inception; we have outperformed the market in seven of these. While each environment over the last 40 years has presented a different opportunity set for us to navigate, our approach remains the same: We stay focused, ignore the noise, fear, and popular sentiment and remain disciplined in our pursuit of higher returns with lower risk of loss.

If we consider what happened following these drawdowns, investors who stayed the course were handsomely rewarded by strong returns and their capital was not only protected, but grew substantially in real terms (see column G). We find this encouraging. 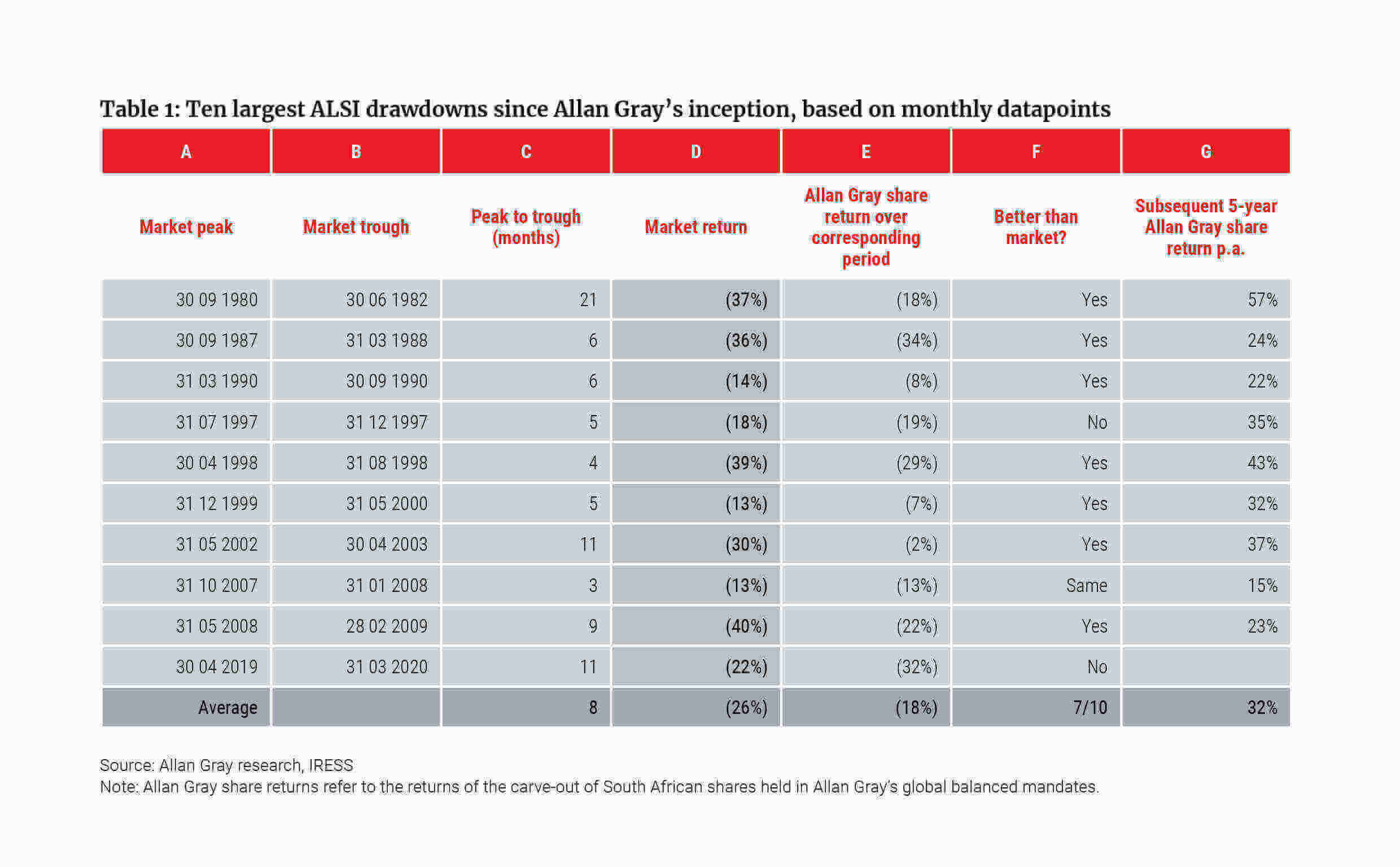 There are two important points to highlight which are cause for enthusiasm: Firstly, the price of the average share in the South African market has not grown for a number of years. Real values of businesses have not stayed the same, and so we continue to find many opportunities today where there is a dislocation between price and value, as we did prior to COVID-19. Secondly, compared to the average listed share in global developed and emerging markets, the average South African share is cheaper.

We retain conviction in the majority of shares that have impacted performance over recent years and expect them to drive the recovery within the funds. This is reassuring, as it means we don’t consider the majority of the decisions that have driven poor performance to be mistakes. There could very well be more pain in store, but we are excited about the long-term prospects.

We are particularly excited about the attractive opportunities offered by select South African shares, specifically among the banks (such as Standard Bank) and retailers (such as Woolworths). In many instances, current valuations suggest that the earnings of these businesses don’t even have to recover quickly to pre-pandemic levels for the investments to be worthwhile.

Despite these attractive valuations, we have been cautious in how we construct the portfolios, in light of the many risks in the broader economic and macro environment. We don’t build portfolios betting on a particular economic outcome, but we are mindful of the tough headwinds that many South African businesses face. Cognisant of the risk that the environment continues to deteriorate, within domestic equities we have opted for a ‘barbell approach’. This ensures that we have good downside protection, with significant exposure to businesses that don’t rely on the local economy, such as Naspers, British American Tobacco, Reinet, Glencore, platinum shares and PGM metals, alongside significant potential upside from depressed and unloved domestic-facing businesses, such as the financial, retail and hospitality shares. Perhaps most exciting is the relative return potential from the offshore component of the funds. The levels of disparity in global equity markets are extreme by historical standards, and we believe our colleagues at Orbis are well positioned to take advantage of any normalisation.

In an unpredictable world, we do not pretend to know how the future will unfold. However, we believe that by investing in a well-diversified portfolio of undervalued assets, and paying close attention to downside risk, we will continue to protect clients’ capital against the risk of permanent capital loss, and deliver returns over time.

Stephan joined Allan Gray in 2013 and is an analyst in the Investment team focused on ESG research. Prior to his current role, he was a manager in the Institutional Clients team. Stephan holds a Bachelor of Commerce (Honours) in Actuarial Science from Stellenbosch University and is a qualified actuary.

Radhesen is head of Orbis Client Servicing in South Africa. He joined Allan Gray in 2012 as a business analyst in the Institutional Clients team. Radhesen holds a Bachelor of Science (Honours) degree in Actuarial Science from the University of the Witwatersrand.

Jacques Plaut and Duncan Artus discuss the positioning of our equity and multi-asset funds given the pre-existing trends exacerbated by the war in Ukraine....