How are our portfolios positioned to protect and grow our clients' capital?

Regular readers of our commentaries would have noted that we have found an increasing number of attractive opportunities in local equities over the last 18 months. This should not be surprising given the pedestrian returns the local equity market delivered relative to low-risk assets such as cash from 2014 to 2016. Duncan Artus discusses how our portfolios are currently positioned and explains the rationale.

Every investment decision we make involves assessing the potential opportunity on its own merits and comparing it to other available opportunities. We also assess the risks and weigh up whether or not these are accounted for in the price. We believe the biggest risk investors face is losing money by overpaying for an asset.

Consider Graph 1, which assumes each year an investor has the choice of either investing in the FTSE/JSE All Share Index (ALSI) or putting their money in the bank. The red bars represent the difference between the two returns or the "excess return" accruing to equities. 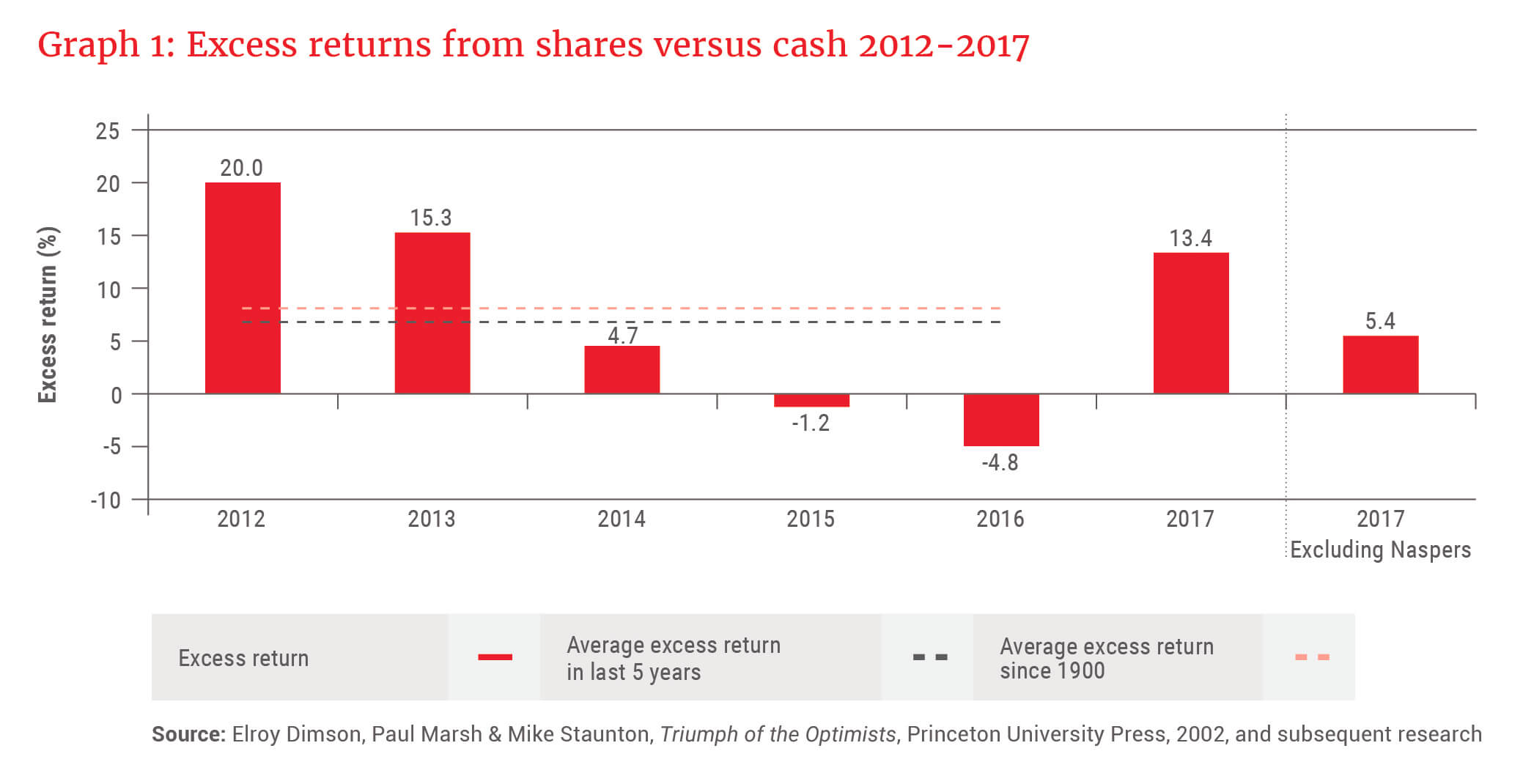 Prior to 2014, equities had been delivering a high excess return. Between 2014 and 2016, the high valuations of local equities that we had been writing about at the time moderated, as they always eventually do, via materially lower and even negative excess returns. This was despite the large positive contributions by SABMiller and Naspers over the period. In other words, the excess return for the average share was even worse than what is depicted in Graph 1.

We believe the biggest risk investors face is losing money by overpaying for an asset.

With an excess return of 13.4%, on the surface 2017 appears to have been a better year for local equity investors, but this is misleading, as 8% was contributed by one share: Naspers. On the back of its investment in Chinese internet giant Tencent, which is now the 6th most valuable company in the world, Naspers returned 71% for the year. It now constitutes 20% of the ALSI. Remove Naspers from the picture, and 2017's excess returns were much lower.

But what about the uncertain local context?

Given our current appetite for certain local shares, and that our asset allocation funds have had a higher average equity weighting over the last year, some clients are questioning our approach: "We understand there may be attractive opportunities in local equities, but what about the scary economic and political outlook for South Africa? Are my investments safe?"

When we make investment decisions on your behalf we think not only about growing your wealth, but also about protecting your capital. When managing portfolios it is important that we separate what we as individuals want to happen in South Africa from our thinking about the portfolio, with a realistic view of potential scenarios and how the portfolio would perform in each of them.

If we simplistically assume low- and high-road scenarios for South Africa for the immediate future, we can attempt to group together the positions in our portfolios which we believe could outperform in each scenario. We also invest in a number of businesses that have both local and offshore operations of varying relative sizes, which we could label the middle-road group.

Table 1 shows the positioning of the Allan Gray Balanced Fund and the size of each position as a percentage of the Fund. It highlights:

Graph 2 shows the Brazilian experience, which some see as a potential template for SA. Brazil had been double-downgraded by rating agencies S&P and Moody's, but the resultant drop in prices turned out to be a buying opportunity. Markets have, so far, rewarded Brazil with a substantial rerating of its bonds (bottom panel), currency and equity markets despite many of its actual economic indicators not yet showing any great signs of improvement. 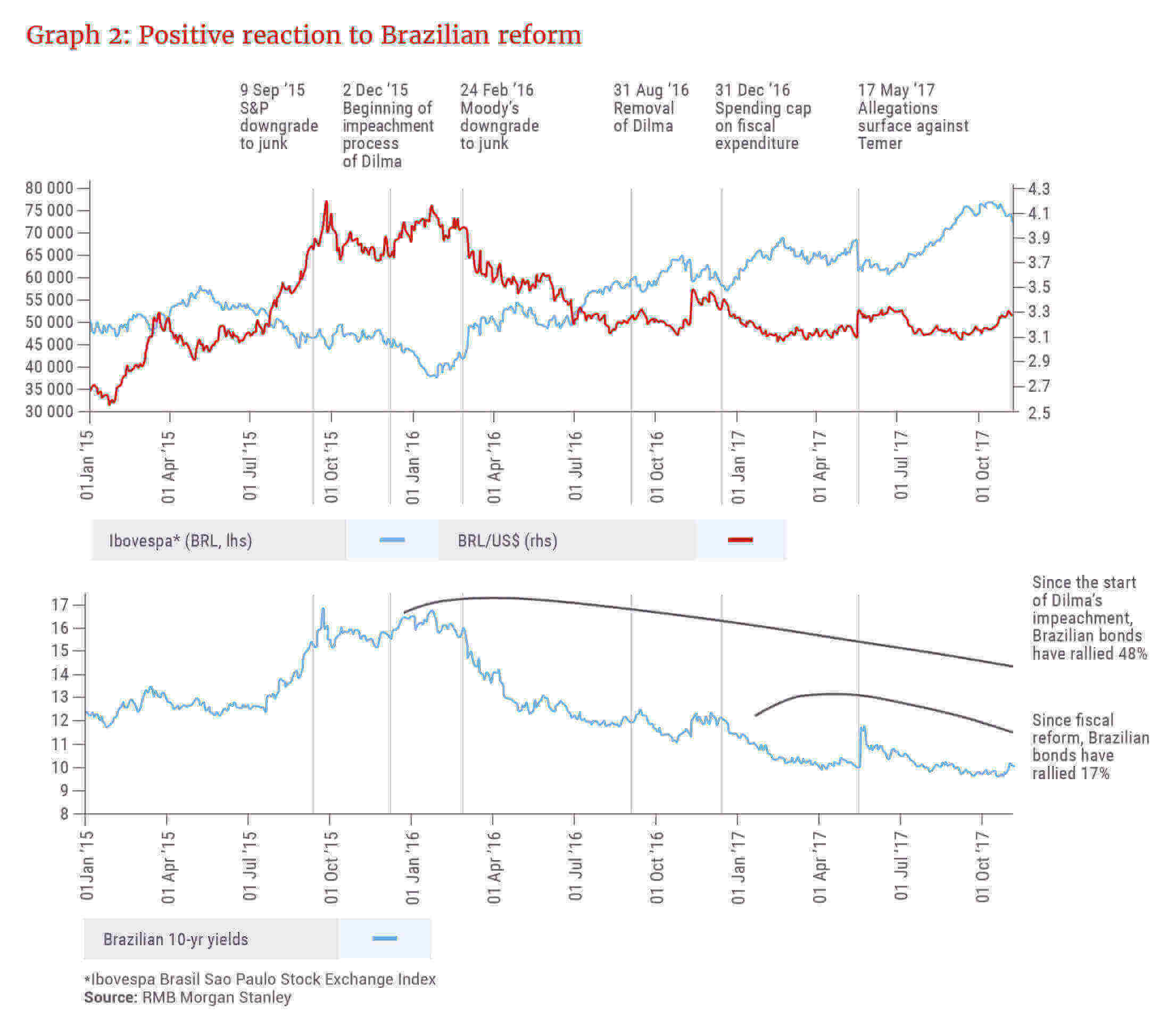 What Brazil has shown so far is intent: The president was impeached, reforms are being attempted at state-owned enterprises (mainly oil company Petrobras) and the government has introduced an expenditure ceiling. While we don't know yet whether the market has overreacted on the positive side, it does illustrate how quickly sentiment can turn. The high road can be priced in surprisingly quickly if investors are overwhelmingly positioned the other way.

What about the portfolio in the low-road scenario?

Twenty five percent of the portfolio is invested offshore in the Orbis funds, which own assets diversified across countries and sectors, many of which are not available to investors on the JSE (the global technology sector is an obvious example). Table 2 shows the positioning of the offshore portion of the Allan Gray Balanced Fund by asset class and geography, while Table 3 shows the offshore position by global sector.

In addition, about 18% of the Fund is currently invested in shares on the ALSI whose profits have very little exposure to the South African economy. The two largest of these are Naspers and British American Tobacco (BAT). Both these shares are currently attractive from a valuation point of view, with the added benefit of increasing the diversification of the portfolio and gaining exposure to structural growth trends. We also have positions in precious metals (gold, palladium and platinum) via listed exchange-traded funds, platinum and gold miners, as well as exposure to global diversified miners. 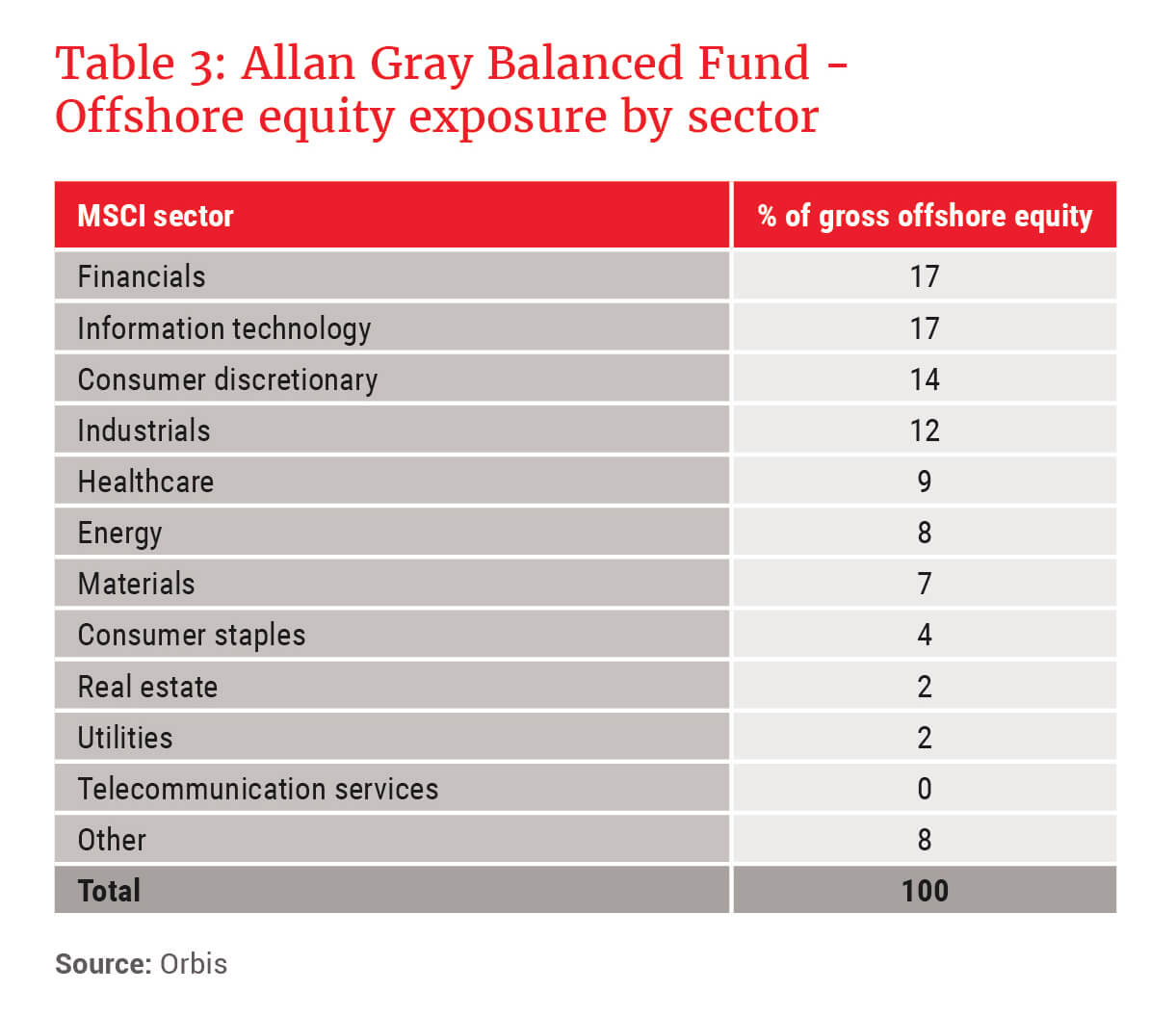 The best protection against potential risks is buying cheap assets

In summary, we believe it is best to position your portfolios to weather multiple outcomes. A well-diversified portfolio has many levers to rely on in pursuit of long-term returns, as long as a fair price was paid for those assets to begin with.

Cheap assets can withstand a lot of bad news. But, as discussed, we think hard about potential tail risks when putting the portfolio together, and the world is not short of tail risks. We continue to work hard to protect and grow your capital in these unsettling times.