One of the most unappreciated assets in a portfolio is optionality – the ability to take advantage of market disparity and to move between and within asset classes. Portfolio Manager Tim Acker discusses how the Allan Gray Balanced Fund uses this feature to its advantage and explains why we are cautiously optimistic about the Fund’s ability to deliver future returns.

2020 was an extremely volatile year and illustrated the value of flexibility in investing. Being able to opportunistically move between asset classes gives us the ability to position the Allan Gray Balanced Fund (the Fund) to take advantage of different opportunities as they arise. In saying this, it can take time for a thesis to play out; patience is key.

Over the past few years absolute returns have been low and, while we have matched our benchmark over five years, returns have been disappointing. Our relatively high exposure to SA inc. shares, our low exposure to resources shares, and not being fully invested in the offshore portion have all detracted from performance. Nevertheless, we believe the Fund is well positioned to deliver future returns (see the graph for a view of positioning). 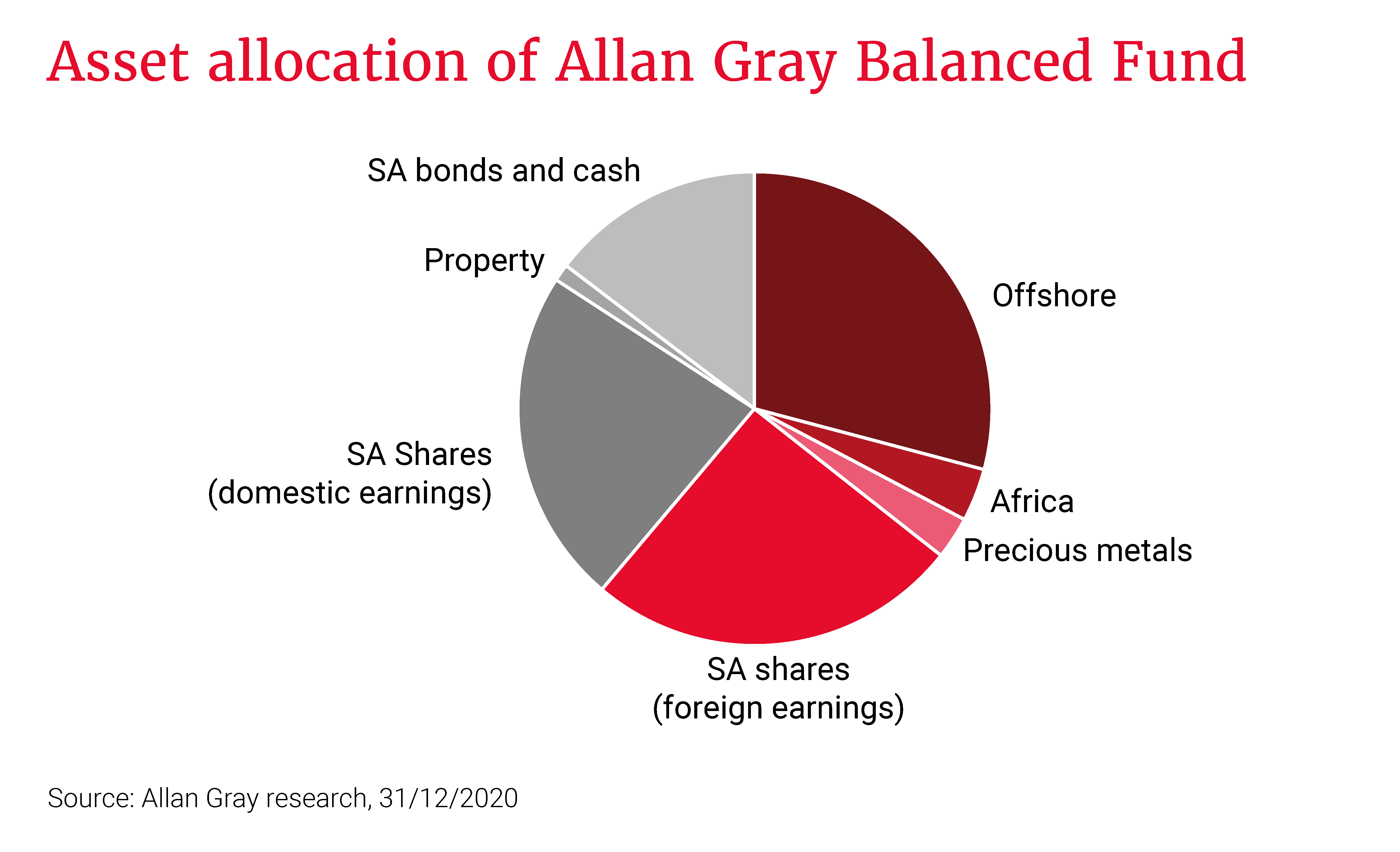 The FTSE/JSE All Share Index (ALSI) ended 2020 7% up – a result that seemed unlikely when the markets crashed in March. However, this doesn’t reflect the true health of the local market:  Performance has been driven by a handful of large shares, including Naspers, major diversified miners and platinum miners. The average South African share is lower today than four years ago.

The SA market has also substantially underperformed the World Index and delivered disappointing returns, especially when measured in dollars. This reflects the company we keep: Emerging markets on the whole have disappointed. The ALSI is back to 2003 levels relative to the World Index – a poor outcome for SA savers. This is partially a reflection of low valuations for many South African businesses.

Over the last decade, the JSE has been about flat in US dollar terms, including dividends. The US has been the star performing market, with the S&P 500 up 3.5x over this period. Based on this, investors are naturally tempted to conclude that it is best to invest in the US. However, investing by looking in the rearview mirror can be dangerous. After the decade from 2000 to 2010, one would have concluded the opposite. The S&P 500 had been flat for 10 years and the ALSI was up 6x in US dollars. Currently the US is trading at close to record high valuations, while SA valuations are below historical levels. We think this presents an attractive opportunity.

While we are not overly bullish on South Africa, we believe there are some nice opportunities locally. However, SA clearly faces many serious challenges: The fiscal deficit is worrying and the options to bring it under control – raising taxes or cutting spending – will be painful to implement. Meanwhile, the debt-to-GDP ratio is forecast to rapidly approach the 100% level. Notwithstanding this, yields on SA government bonds are higher than they have been for most of the past decade – in an environment where the rest of the world is starved for yield.

While clearly the risks are elevated, we think the yields appropriately compensate investors. We are cautiously optimistic about SA shares and bonds and are buying selectively.

About 30% of the Fund is invested directly offshore, but a substantial portion of the SA share exposure is to companies that earn their earnings outside of the country. Examples include our three biggest holdings: Naspers, British American Tobacco and Glencore. An investor in the Fund therefore has more than half their money invested in assets with underlying exposure outside SA.

When it comes to our offshore positioning, there are two things to note: Firstly, more than one-third of the offshore portion of the portfolio is invested in cash and hedged equities, and secondly, we are underweight the US market.

We are concerned about high valuations in global equity markets, particularly the US, and our offshore partner Orbis is picking opportunities very carefully. A large portion of the S&P 500’s performance over the last five years has been driven by the so-called FAAANM stocks (Facebook, Amazon, Apple, Alphabet, Netflix and Microsoft). The World Index is also becoming increasingly concentrated as returns have been driven by large companies. The top 10 shares now account for 17% of the Index – very high by historical standards. Previous periods of high concentration have often been followed by large stocks underperforming.

We are excited about the positioning of both the local and the offshore portion of the portfolio. We think the prospects for relative returns are particularly attractive in the offshore portion, given the wide divergence in valuations for certain global stocks and sectors.

Sitting at the bottom of the interest rate cycle, potentially for much longer

The South African Reserve Bank’s Monetary Policy Committee (MPC) voted in May 2021 to again keep the repo rate unchanged at 3.5%, its lowest level since the...

Where to from here for interest rates and money market returns?

Lower interest rates, although a life jacket for those in debt or with home loans, have negative consequences for savers.&nbsp;

In a recent webinar, Portfolio Manager Tim Acker discussed the investment environment and looked at how the Allan Gray Balanced Fund is positioned to take...