Do you enjoy pain? How about the platinum industry?

Over the past two years we have invested in certain platinum mining companies. These investments have performed extremely poorly. Andrew Lapping looks back at the investment case in an attempt to understand where we went wrong and considers how market sentiment towards the sector has changed over the past 20 years.

Finding an economically viable platinum deposit is quite difficult. There are two in Russia, two in North America, the Great Dyke in Zimbabwe and the three limbs of the Bushveld Igneous Complex. Just five companies control, directly or indirectly, about 95% of the world’s primary platinum production. One would think owning a large portion of any of these deposits would allow for unusually high returns on capital.

Chickens, on the other hand, are not particularly rare and can be farmed almost anywhere. That said, temperate countries with low-cost maize supply are better suited to low-cost chicken production. South Africa is a decent place to grow chickens – but not the best.

Since May 2008, Impala has invested capital of R48bn compared to Astral’s capital expenditure of R2.1bn. It would seem investing in chicken production is a better bet than platinum mining.

Impala is not the only platinum mining share to disappoint investors – the sector has suffered. Northam Platinum outperformed by only halving from its 2008 peak, followed by Anglo Platinum with a 75% fall.

Conventional wisdom contends that an industry, or at least the dominant players in an industry, should make a certain minimum return on capital. If returns fall below this minimum, investment will cease, supply will fall and prices rise. This scenario has not played out in South Africa despite the sector generating extremely low or negative returns for a decade.

Adjusting for US inflation, platinum is a little below its 25-year average (US$906 compared to US$1 125), while palladium is well above (US$970 compared to US$485 average). Rand metal prices, when adjusted for inflation, are in line with the 20-year average and well above the long-term average. So the industry’s problem is definitely not exceptionally low metal prices. 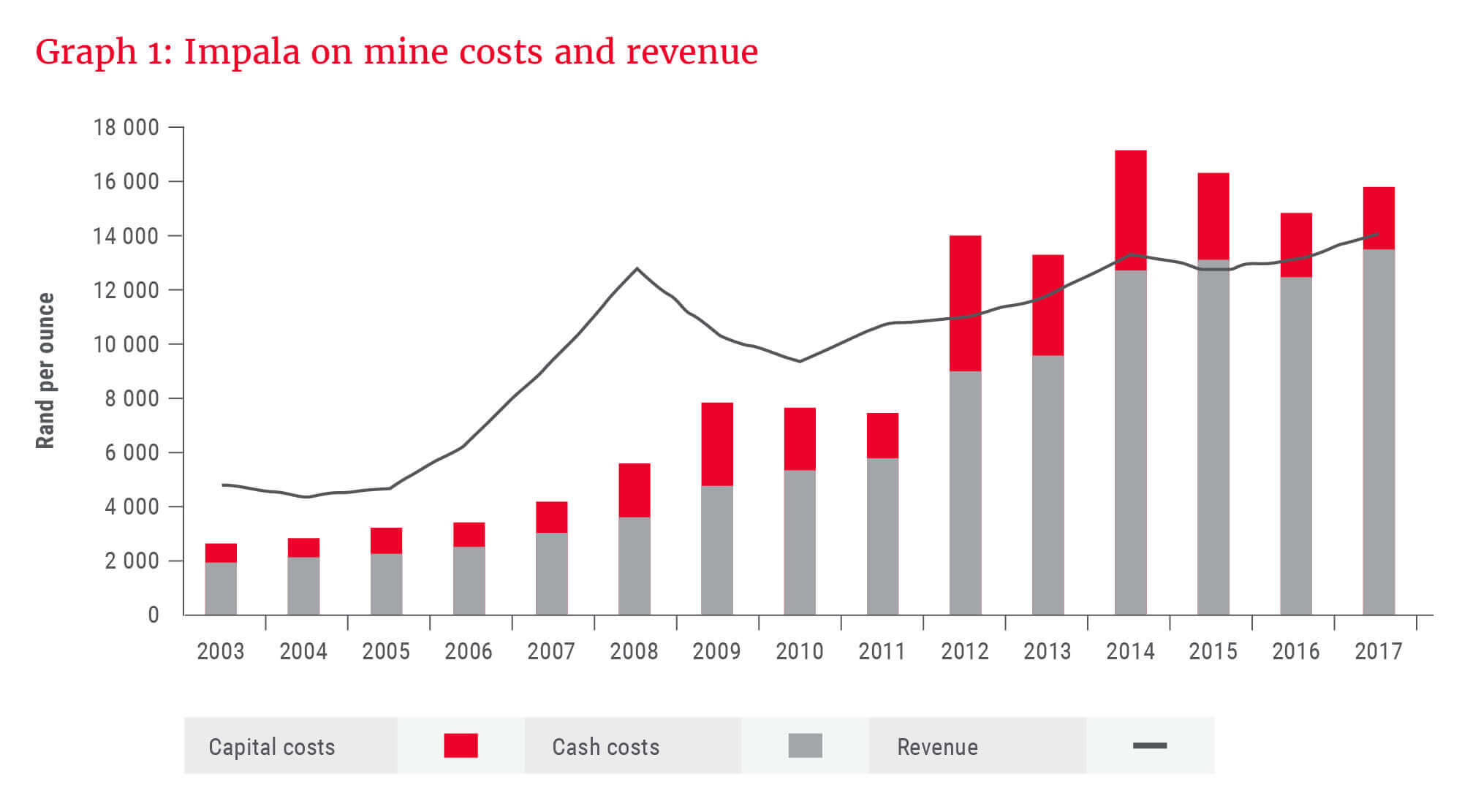 If the metal price is not the problem, maybe the cost of production is the issue. Consider Graph 1: In the year to June 2008, the Impala lease area1 produced 1.6 million 4E2 ounces at an on mine cost of R3 629 per ounce for a total cash expenditure of R6bn. In the year to June 2017, the lease area produced 1.08 million 4E ounces at a unit cost of R13 558 for a total on mine expenditure of R14.6bn. The 16% annual unit cost increase at the Impala lease area compares to the annual consumer price increase of 6% over the same period. Any business where production costs increase at a compound annual growth rate (CAGR) of inflation plus 10% per year will find itself in a very difficult situation. What went so wrong? 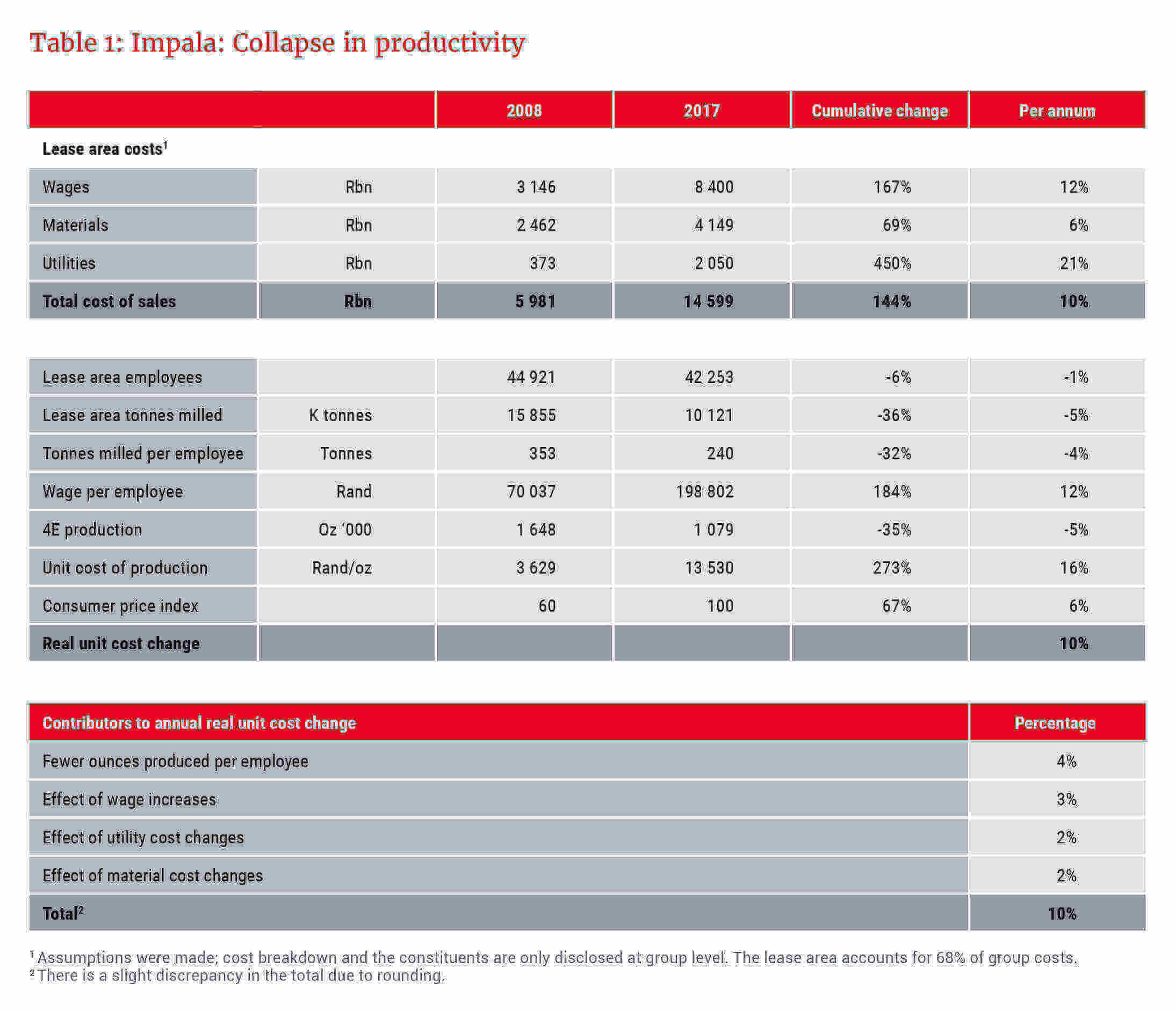 The root cause is a collapse in productivity (see Table 1 for the analysis). The lease area mined 36% fewer tonnes, but the people required to mine these tonnes only fell 6%. Despite the production per person falling 4% per year, their real wages increased by 5% per year. Total utility costs increased 21% per year – a shocking number, which is made worse by the fact that the mine produced 35% less metal nine years later.

The Impala lease area is indicative of South African underground platinum mining. The few platinum mines that have controlled costs have gone from mediocre to exceptional as the industry has fallen apart around them.

In 2003, the open-pit Mogalakwena mine was an average asset: The unit costs were similar to those of the industry and the mine accounted for 13% of Anglo Platinum’s cash flow. Fifteen years later, only one Anglo Platinum asset matters: Mogalakwena. It accounts for 90% of the group’s on mine free cash flow and value. How did it happen? 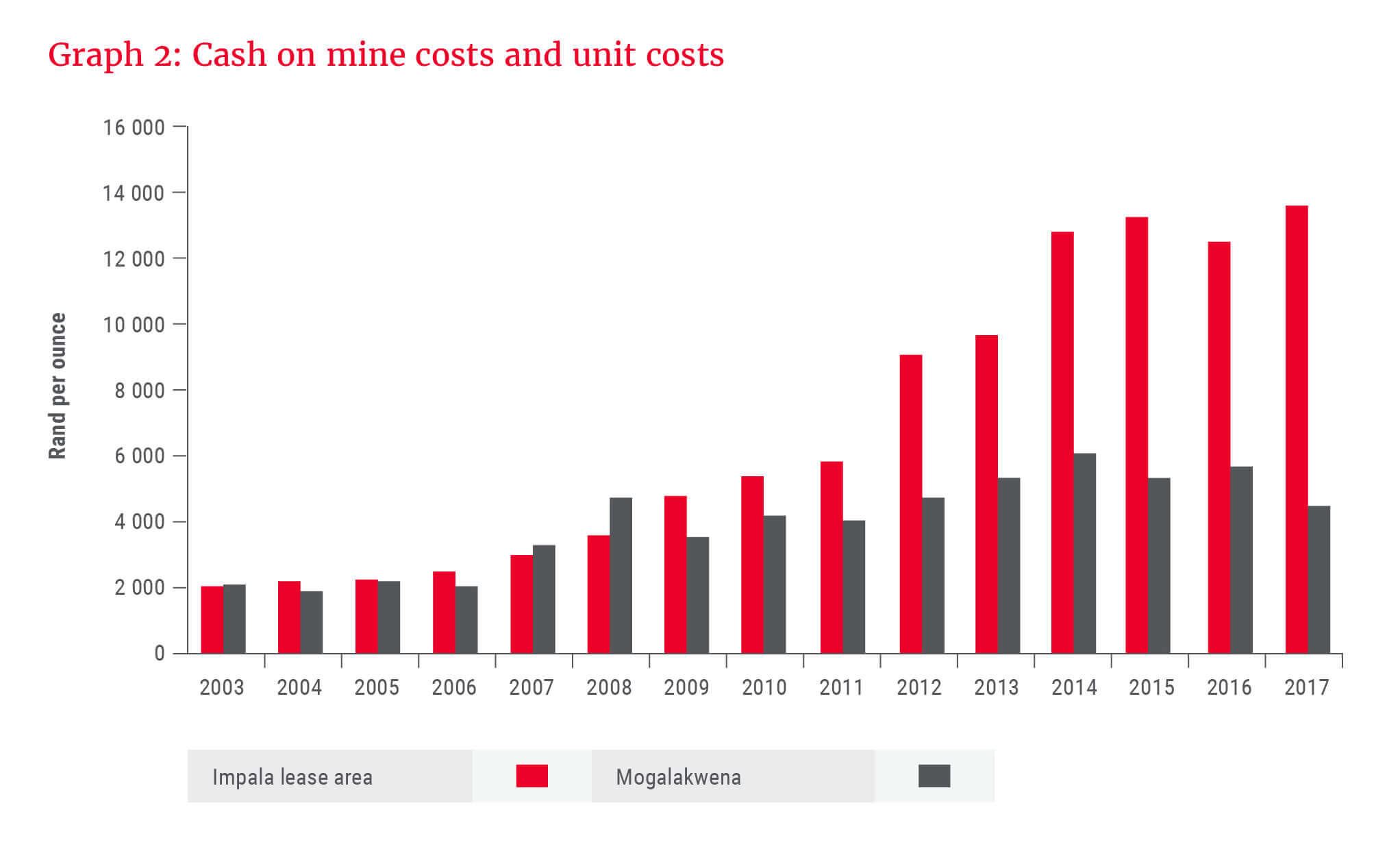 Given the track record, why would anyone invest in underground platinum mining? There are four possible reasons:

People are very poor at making discreet predictions based on a set of assumptions as the interrelated factors are too complex. That said, it would be unwise to close your eyes to potential risks. Risks to the upside and downside include a growing middle class in developing nations who want to own cars, the growth of electric vehicles that don’t need catalysts, diesel cars which are very heavily loaded with platinum becoming pariahs, tightening emission standards in emerging nations, and the very high recycling rate of autocatalysts in developed nations.

An often-cited argument is that if the South African industry makes no money, supply will leave the industry and prices will rise. Unfortunately, the barriers to exit are high and people are unwilling to abandon hope, so supply leaves the industry very slowly despite years of subpar returns. South African production has undershot historic forecasts, but the level to which high prices can save you is limited. High prices destroy demand as consumers search ever harder for alternatives and use less of your product.

On productivity: There have been occasions where mining operations have improved, and there is a point where productivity is so low that it should stop deteriorating. However, given the 15-year track record you are betting against the odds.

So why do we have a position in Impala Platinum given the track record?

When we originally invested we expected the enormous capital investment to bear fruit and the productivity deterioration of the lease area to slow. This was too optimistic. In addition, given the deterioration in the competitiveness of industrial South Africa (witness electricity prices up 22% per year, ever-greater regulatory burdens and substantial real-wage increases), we placed a greater probability on rand weakness. We also thought supply would be quicker to exit the industry.

Over the past two years, the share has halved. At R19.50 the market is now ascribing a negative value to the Impala lease area (despite R35bn of investment over 10 years). Fortunately the lease area is not the only asset. The company owns shares in three low-cost, mechanised mines that are comfortably profitable, and it also has a refining business.

Given the depressed valuation, strong rand, poor operational performance and negative sentiment towards the platinum sector, things only have to become “less bad” for the share to be a substantial outperformer. But there are clearly risks, not least of which is that the lease area is worth a large negative number, thus the modest position of 0.5% of Fund.

Andrew was employed at Allan Gray from February 2001 to August 2020. He joined as a fixed interest trader and moved to the Investment team as an equity analyst in February 2003. He was appointed as fixed interest portfolio manager in June 2006, began managing a portion of client equity and balanced portfolios in February 2008 and became chief investment officer in March 2016. He also managed African equities. Andrew holds a Bachelor of Science degree in Engineering and a Bachelor of Commerce degree in Accounting, both from the University of Cape Town, and is a CFA® charterholder.