Most of you will be more than familiar with the fashion, beauty, home and food offering of retailer Woolworths, affectionately referred to as Woolies, and one of the top 10 holdings in our Equity, Balanced and Stable funds. Jithen Pillay examines the investment case for the business, which also owns Country Road Group (speciality fashion retailer) and David Jones (higher-end department stores), operating predominately in Australia.

We have a long history of buying and selling Woolworths Holdings Limited (WHL). In the early 2000s, our clients owned approximately 30% of the company. At the time, earnings were low, and investors were only willing to pay about 10 times these depressed earnings. We were buyers, believing WHL had a strong position in the South African retail market, which management could leverage to improve WHL’s economics. As the stock approached our estimate of its fair value, we began selling, and sold out completely in 2006. And so it remained for the next decade, until the opportunity presented itself again.

Successful food retailers master the retail “virtuous circle”. By building scale from both existing and new stores, a retailer can use its increased bargaining power to negotiate lower prices from suppliers, allowing lower prices to filter through to customers, which further grows volumes. As this flywheel reinforces itself, margins grow, further aided by improved utilisation of fixed-cost infrastructure (stores, distribution centres, etc). WHL has followed this successfully with Food, growing its operating margin from 3.6% in 2009 to 7.7% in 2020, as shown in Graph 1. 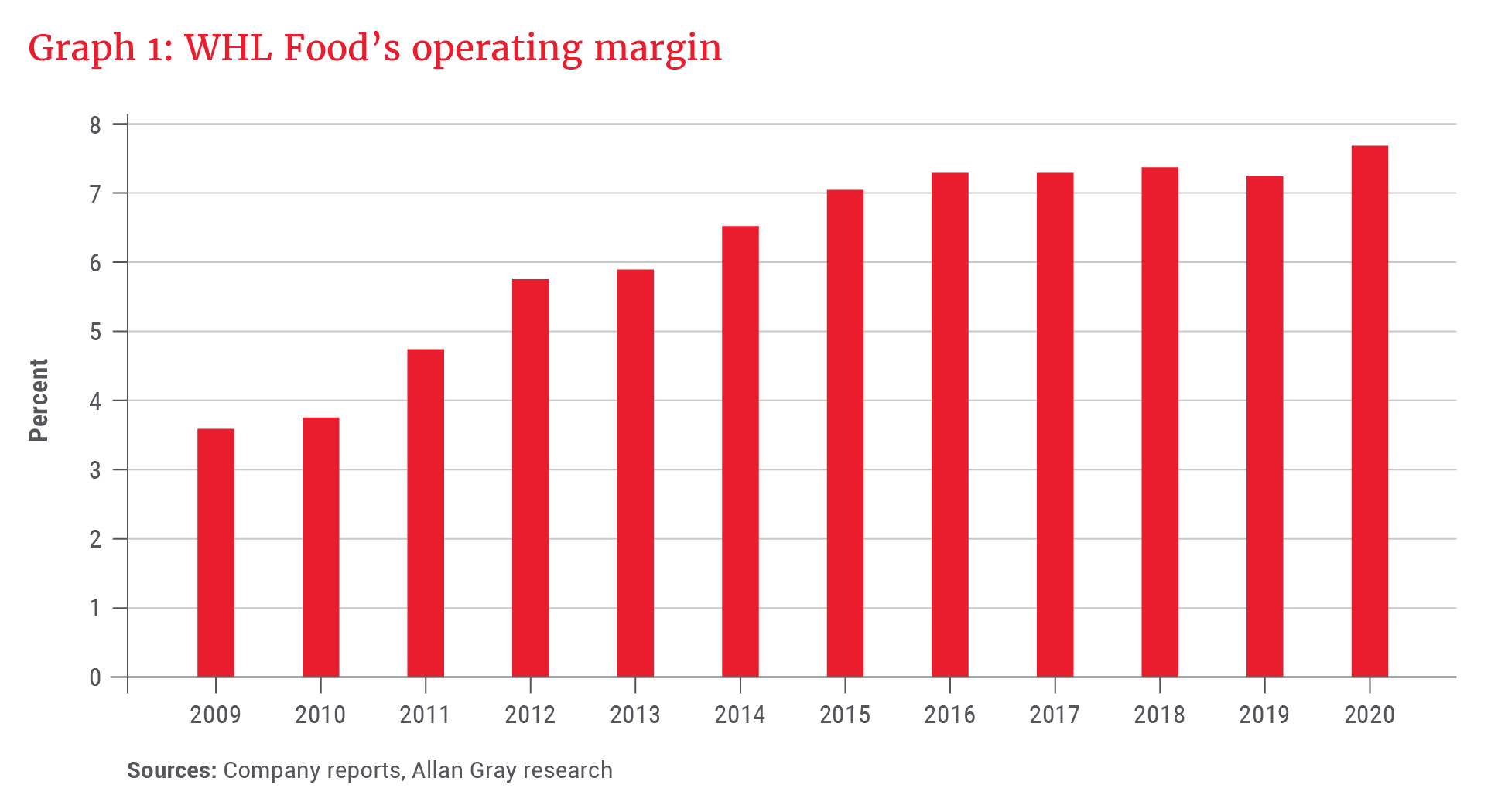 These initiatives, coupled with WHL’s low market share, provide adequate runway to grow in future. We believe WHL Food is one of the best food businesses globally, earning high returns with a moat to protect its economics.

Apparel retail introduces an additional component to the retail virtuous circle. Given a lack of homogenous inventory, product curation becomes very important in attracting customers. Unfortunately, supply chain efficiencies have hidden WHL’s poor relative volume growth compared to key peers since 2008 (particularly in womenswear). New management heads at both group and divisional levels have brought fresh perspectives and they are taking sensible steps to address the shortcomings. While execution risk is high, the WHL brand still resonates strongly with the South African consumer.

Although FBH’s 2020 operating profit is down 70% from its 2016 peak, its sales are only 9% lower. A large revenue base (R12.4bn in 2020) provides material upside if management’s actions are successful in normalising margins towards historic levels. FBH should also be able to apply key learnings from Country Road Group (CRG) as it has successfully navigated similar challenges in recent years. Importantly, while WHL’s SA returns have trended lower owing to FBH’s underperformance, its return on capital employed (ROCE) is still high in absolute terms. See Graph 2. 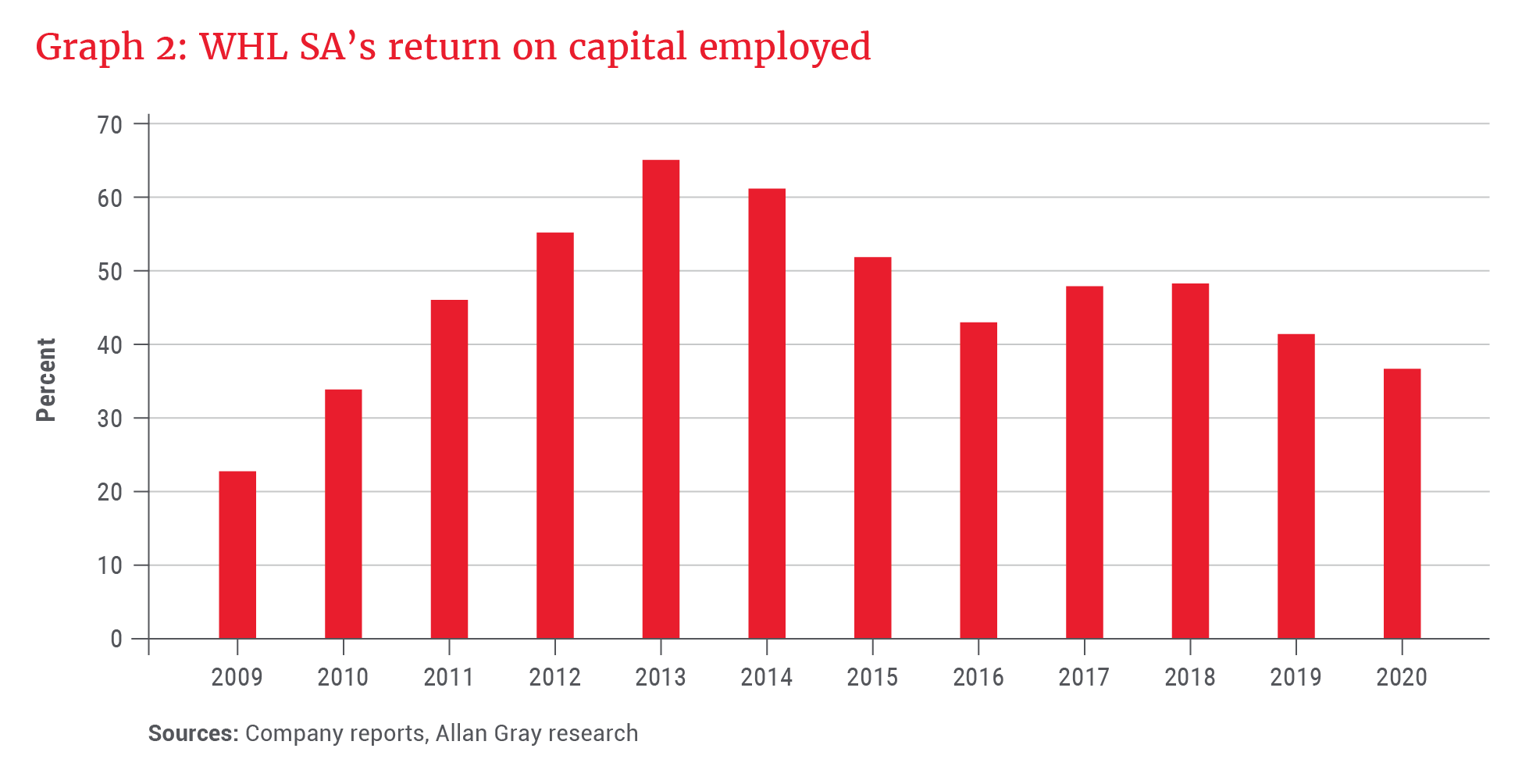 Retailers are inherently indebted given large lease liabilities to landlords; it is therefore not a good idea to add a lot of financial debt to this. WHL bought David Jones (DJS) in August 2014 for AUD2.1bn (R21.4bn). The company overpaid for the acquisition, overestimating the potential of private label products, and underestimating the complexity of overhauling operating practices and closing underperforming store space. As a result of the deal (including R10bn new equity raised), WHL moved from a net cash position on its balance sheet in 2014 to being R14bn in net debt by its 2015 year-end. 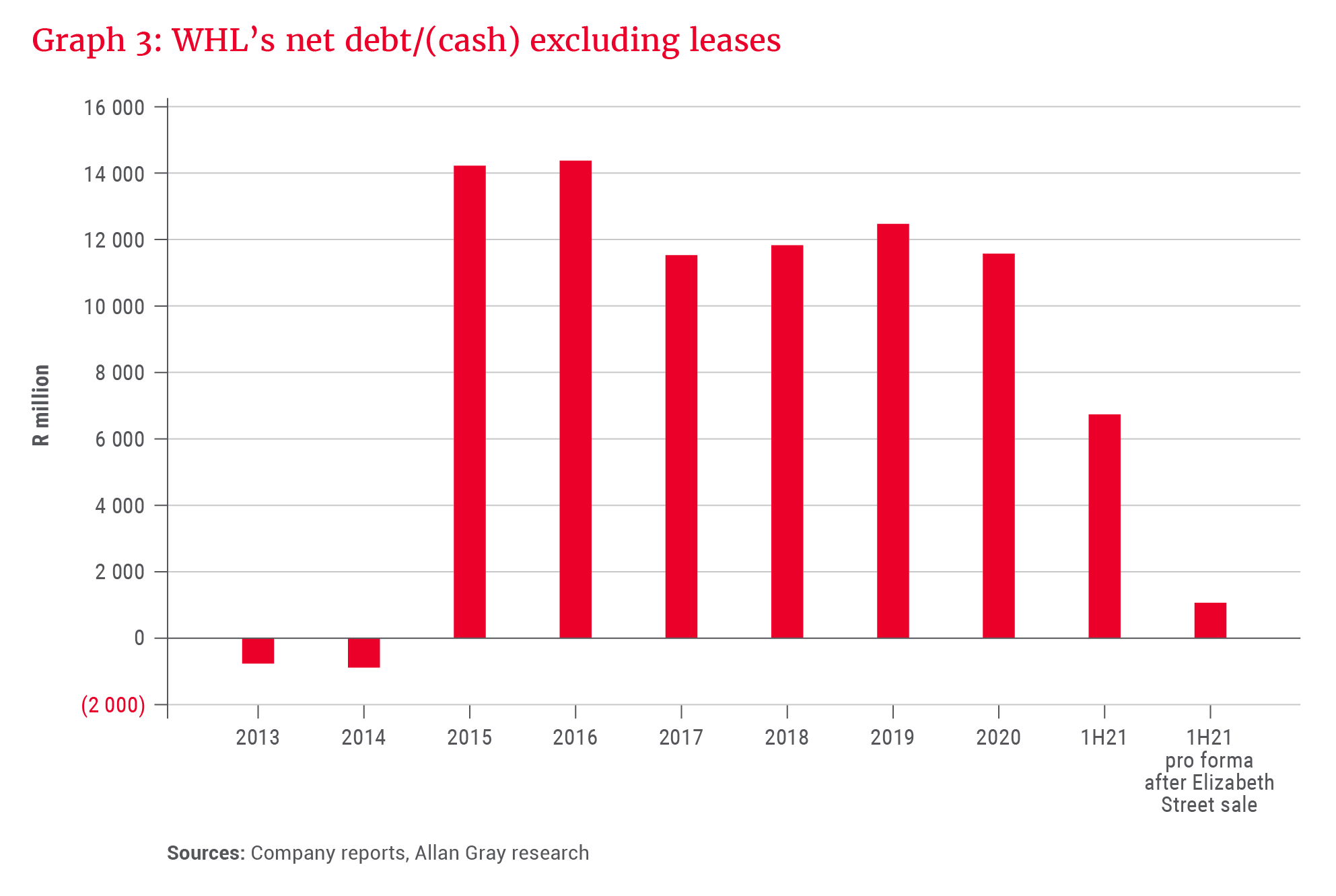 On CRG and DJS’s trading more broadly, management is responding to a shift towards online and speciality retail in Australia. CRG launched its online store in 2010; the channel contributed 32% of CRG’s revenue for the six months to end-December 2020. Relatively short CRG leases allow management to close unproductive space as its digital channels grow. CRG’s brand equity with customers also remains high. As Australia is far ahead of South Africa in online retail penetration, WHL’s experience with CRG and DJS should also position it favourably in applying learnings to its SA business to scale its online operations profitably.

DJS’s prognosis is more uncertain. We believe there could be a sustainable future for DJS as a smaller but more productive retailer, providing a unique customer experience with exclusive premium brands and offering omnichannel sales capability (online sales contributed 18% of its total for the six months to end-December 2020). Importantly, DJS now has the balance sheet to trade itself into a better position, and greater flexibility with landlords in reducing underperforming space. While execution risk is again high, we believe at current levels, one is not paying for this upside optionality. For context, DJS made AUD170m in operating profit in 2016 compared to an operating loss of AUD33m in 2020. Notably, downside risk is limited given DJS’s requirement to fund itself as a stand-alone business.

Our clients were not material shareholders in WHL following its purchase of DJS and leading up to the 2015 peak as we believed the market was overly optimistic about the company’s prospects. As weak trading in FBH and DJS caused this sentiment to change, the share traded below our estimate of its intrinsic value and allowed our clients to once again build a meaningful stake, as shown in Graph 4. Despite the share price having almost doubled from the March 2020 trough (versus the FTSE/JSE All Share Index, which is up 74%), WHL trades on less than 12 times our estimate of its through-the-cycle earnings.

The most important determinant of future returns is the price you pay for an investment today. Balancing the risks and rewards, at current valuations, we believe WHL is still an attractive investment proposition. 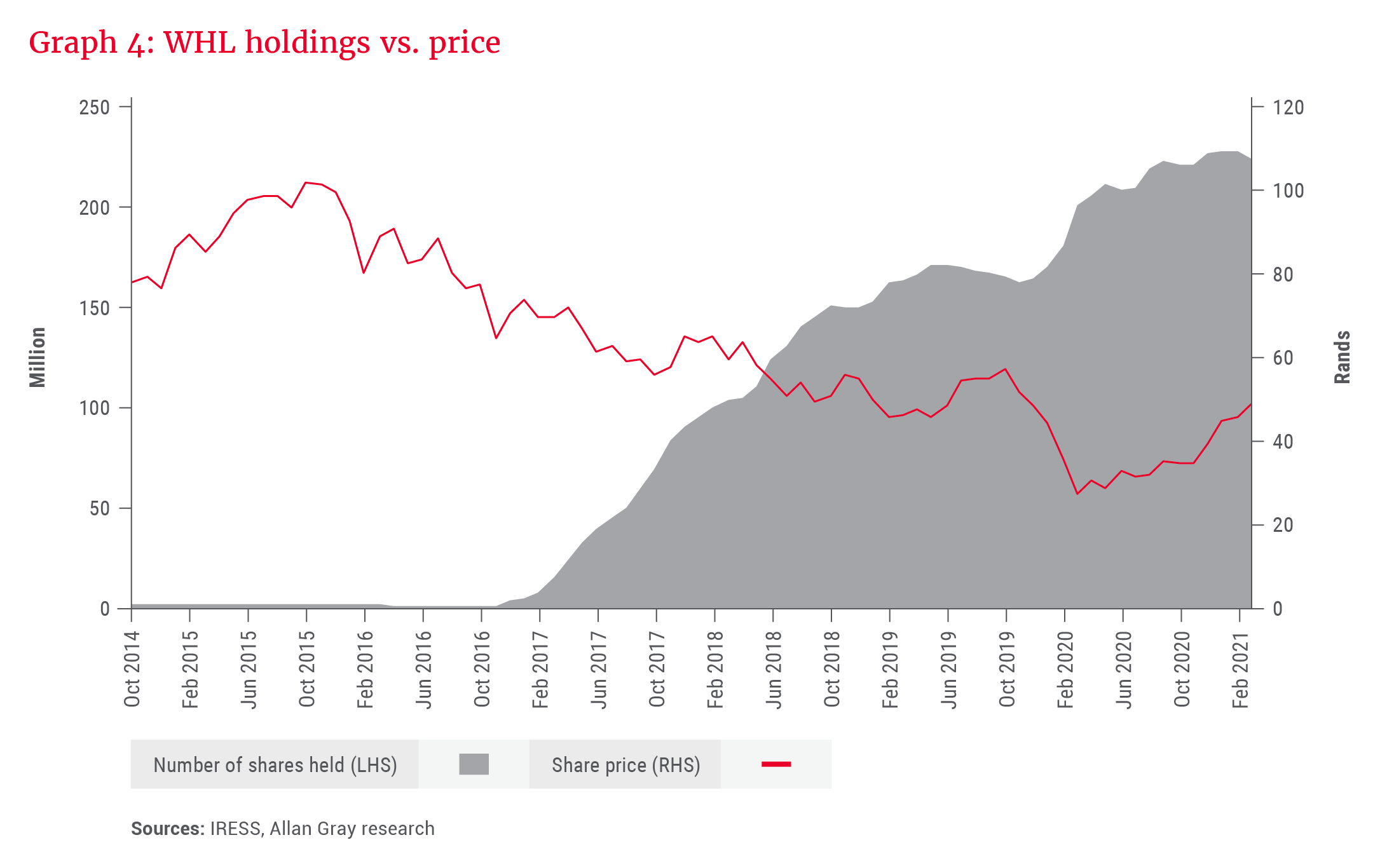 Jithen joined Allan Gray in 2013 as a CA trainee and is currently an analyst in the Investment team. He holds a Bachelor of Business Science degree in Finance and Accounting and a Postgraduate Diploma in Accounting, both from the University of Cape Town. Jithen is a qualified Chartered Accountant (SA) and a CFA® charterholder.