Reflecting on our top equity holdings

The performance of the Allan Gray Equity, Balanced and Stable funds has been disappointing over the past couple of years. Low single-digit returns from equities listed on the Johannesburg Stock Exchange (JSE) have contributed to these low returns. In addition, the equities specifically selected for our portfolios have experienced challenging performance relative to the market over the past year. Leonard Krüger appraises our decisions.

A review of the recent performance of shares on the JSE reveals a large discrepancy between individual names. Whereas three of the largest counters, namely Naspers and the large diversified miners BHP and Anglo American, have delivered good returns to investors, most other shares, apart from the precious metal miners that rallied off an extremely depressed base after many years of negative returns, have struggled. Allan Gray portfolios were and continue to be underweight this subset of names compared to average. In other words, our portfolios had fewer of the relative winners and more of the relative losers.

Yet, we have not made large wholesale changes to these “relative losers”. In fact, in some instances, we have bought more of these shares recently. This may feel counterintuitive, but should not be unexpected for clients familiar with our long-term investment philosophy and approach. We constantly reassess and test our investment case for each holding against market and company-specific developments and prices. A brief recap of and update on some of the largest detractors from our recent performance will hopefully illustrate this approach. In this piece, we focus purely on the equity holdings. To learn more about how we approach portfolio construction overall, please see Andrew Lapping’s piece.

Late delivery and cost overruns of Sasol’s massive Lake Charles Chemicals Project in the United States have been extremely disappointing. Compounding this disappointment is the material uncertainty created by the delayed release of financial results to allow the board of directors time to complete an independent review of the underlying reasons for the overruns. At the time of writing, we await the findings of this review.

What is already clear is that future returns from the Lake Charles project will be lower than initially expected. This has reduced our assessment of the intrinsic value of Sasol. The market has, however, taken a much dimmer view of Sasol’s future prospects than we believe will prevail over the long term.

Construction of Lake Charles is largely complete and certain units have achieved beneficial operation. Sasol’s plants in South Africa and the rest of the world operate in line with expectations and profitably. Material geopolitical risks of disruption across energy markets abound, creating upside risk. Yet Sasol trades on less than six times our assessment of normal earnings, adequately reflecting the now widely known debt, project and management risks resulting from Lake Charles.

Conversely, BAT’s capital investment (acquiring Reynolds’s minorities in 2017) in the United States has progressed largely as planned from the company’s point of view. The market’s faith in the sustainability of the financially attractive business model of large tobacco firms has been shaken by disruptive new alternative tobacco entrants/technology and regulatory interventionist plans. Our market research and conversations point to limited evidence of this occurring in the near term. In fact, BAT recently reiterated its medium-term guidance of continued earnings, cash flows and dividend growth. Furthermore, BAT is making substantial investments in its portfolio of next-generation products with promising initial signs in many categories and markets. Shares in BAT offer investors over a 7% dividend yield today, in hard currency, and that dividend is likely to grow every year for the foreseeable future.

Remgro is the quintessential South African investment holding company. With diverse underlying investments in banking, insurance, healthcare, telecommunications and food businesses, among others, an investment in Remgro can be thought of as a portfolio within our portfolios. Facing an environment of low growth and low business and consumer confidence in South Africa’s economic prospects, owning some of South Africa’s strongest businesses and best management teams at below-average prices provides some safety in uncertain times.

In addition to its defensive diversification benefits, financial risk is also low since Remgro is in a net cash position. The cherry on top for us, however, is that an investor can buy the above positive attributes at the largest discount (roughly 25%) to the net asset value (NAV) seen in Remgro for over 10 years.

In contrast to peers BHP and Anglo American, this diversified miner and commodity trader has no exposure to the iron ore market, which is currently experiencing high prices. Extraordinary profits in iron ore following large supply disruptions from Brazil are not sustainable, in our opinion. Experience from investing in commodity companies has taught us that falling profitability is rarely an ingredient for strong share price performance, irrespective of perceived low multiples.

Glencore’s commodity price basket has as a result been weaker than that of peers, and its share price performance has followed suit. But Glencore’s production has also disappointed – a matter being addressed by the company and which we believe is solvable without requiring meaningful capital expenditure.

Apart from the difference in its iron ore exposure, other positive attributes that differentiate Glencore from peers are its commodity trading business and the close alignment of interests between shareholders and its management team. Commodity trading is a higher return, less volatile business than mining. Glencore’s management owns around 20% of the business and is driven more by share price performance than annual salaries and bonuses. Active share buybacks at the current share price demonstrate this and add value to remaining shareholders, in our view. Glencore currently trades at less than six times our assessment of normal free cash flow.

The well-known UK and South African banking and asset management franchise has served its clients and employees well over many years. Since the financial crisis of 2009, this has not been equally true for shareholders. Dealing with large legacy issues and a more onerous and capital-intensive regulatory environment in the banking world, Investec’s returns have disappointed, particularly returns from its UK banking unit. Brexit and record low interest rates have certainly not made matters easier.

This has overshadowed Investec’s success in growing and broadening its asset and wealth management divisions.These are substantial and valuable businesses. New management, together with the board, has resolved to split the asset management business from the rest of the Investec group in 2020. Regulatory approvals are in place and a shareholder vote will be held shortly. While no panacea to unlock the inherent value of the group’s assets, it demonstrates the increased shareholder focus of Investec to also serve shareholders better going forward. At 7.5 times normal earnings, the valuation is attractive against this shareholder-friendly backdrop.

While the reasons for the recent underperformance and the investment rationale for holding each investment discussed above may differ, all of these investments have one thing in common: Each one trades at a cheap valuation today and materially below our assessment of its true long-term intrinsic value.

Investing is never entirely risk-free, even at low valuations and after a period of underperformance. There are known risks to monitor, and the possibility of unforeseen negative surprises always exists. Valuations today offer a margin of safety larger than we have found in many years and we are optimistic about the outlook for higher returns. 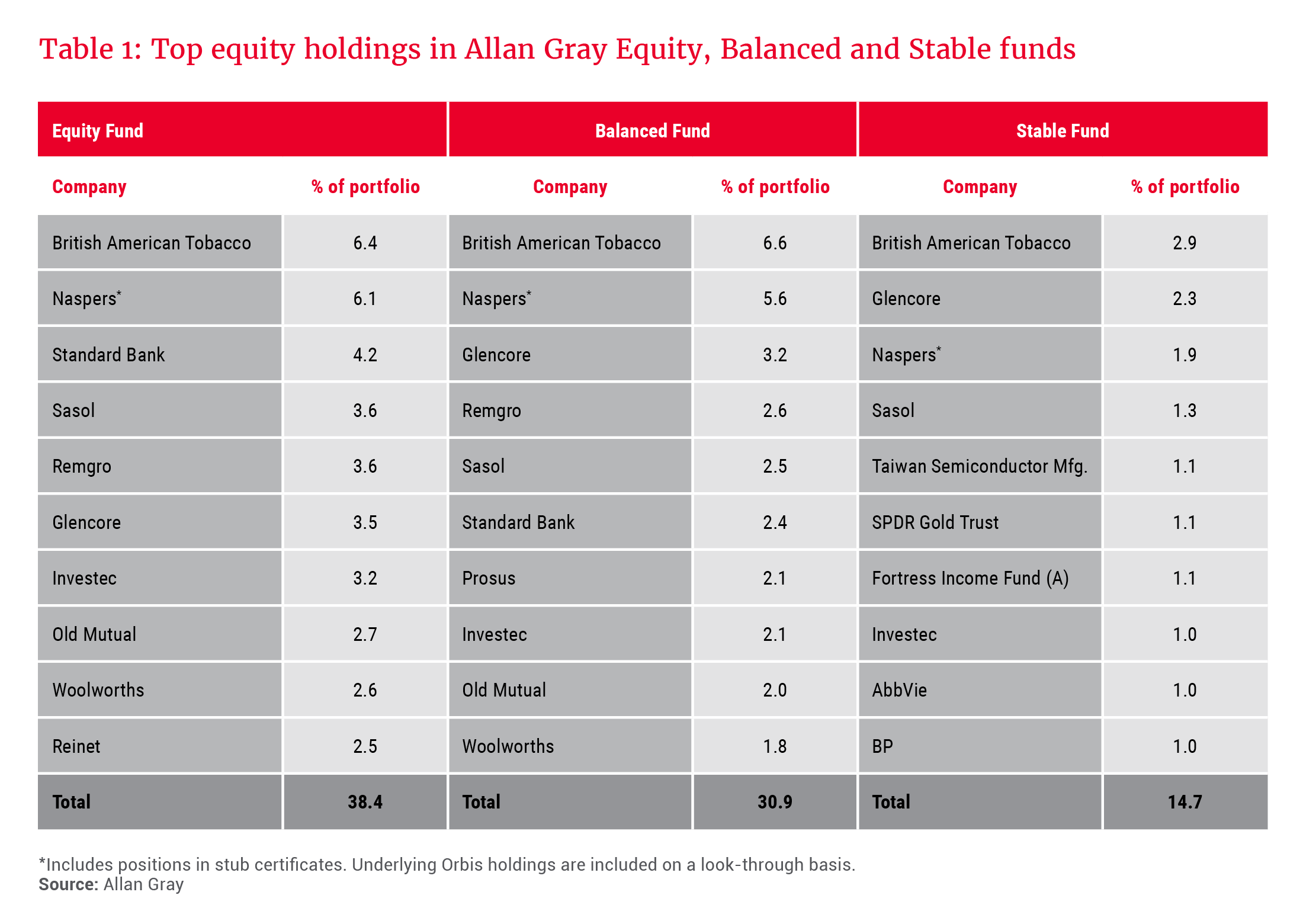