Buying above-average companies at average or hopefully below-average prices is a sound investment strategy. An above-average company will generally have some kind of sustainable competitive advantage, which would allow it to grow at a faster rate than the average company while paying decent dividends. Although the price may not seem cheap, the extra growth will reward shareholders over the long term. Examples include SABMiller and British American Tobacco, two of our clients' largest holdings.

Buying mediocre companies at cheap prices can also prove to be a rewarding investment strategy. Such companies are typically prone to cyclical changes in their profitability. When times are tough, earnings are low and the outlook is often uncertain. As a result, the shares are unloved and trading at an attractive discount to fair value. As conditions improve, so too does sentiment. The patient investor is rewarded as improvements in both earnings and investor interest drive the share back to fair value (and often beyond). As Rory Kutisker-Jacobson discusses, we believe construction companies fall into this latter camp.

The construction industry is fragmented and cyclical, and competitors have few, if any, sustainable competitive advantages. Further to this, the risk/reward balance on large contracts is skewed heavily in the client's favour. Successful delivery on a project will generally result in a low single-digit profit margin. A contract that proves more difficult than anticipated, is poorly executed, and/or mispriced, can however result in losses that exceed the total original value of the project. Thus a single bad job, where losses exceed 100% of the original contract value, can more than wipe out the 4% profit made on 25 jobs of similar size.

For outside shareholders, identifying these risks is made more difficult by larger projects often running over multiple reporting periods. Depending on how conservative the management team has been in recognising profit or losses on the completion of a project, underlying problems may be masked for several months, sometimes years, before the company reports a sudden and dramatic change in fortune. Even if the losses incurred are not of the construction company's making, claims against clients can take years to resolve. In the interim, the obligation is on the construction company to fund the project to completion. This can and often does put significant pressure on the financial well-being of the company.

With this in mind, it may seem obvious that paying a premium for construction companies is unwarranted - but sentiment is a fickle thing. As Benjamin Graham once quipped: 'The memory of the financial community is proverbially and distressingly short.' A review of the recent experience in the sector serves as a good example.

A short history of construction euphoria

Our tale begins in June 2000: For several years, gross fixed capital formation (GFCF) has been on a downward trend. GFCF has fallen from over 25% as a percentage of GDP in 1983 to less than 14% in 2000, as shown in Graph 1. As construction activity is strongly correlated with GFCF, the low level of activity has led to tough times and constrained margins. 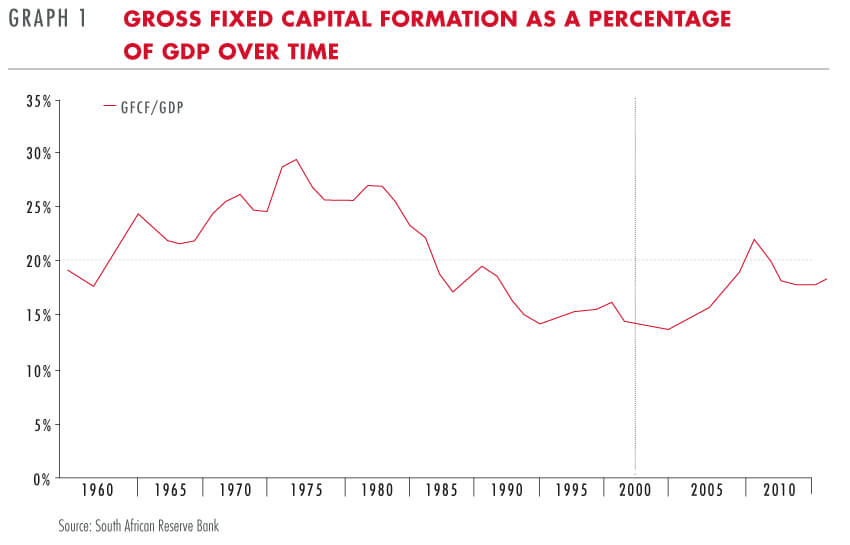 Investor sentiment is at a low. Despite being profitable, Murray & Roberts (M&R), WBHO and Group Five trade in the market at a discount to their tangible net asset value (TNAV), while Aveng trades at a small premium. WBHO, which at this point has consistently grown earnings and never reported a loss, trades at a discount to the net cash on its balance sheet.

After significant impairments, M&R is disposing of 'non-core operations' to strengthen the balance sheet and 'reposition' the business for growth.

The outlook is uncertain, but cautiously optimistic. WBHO's 2000 annual chairman's letter states: 'The South African construction industry has in general experienced another difficult year but there are, at last, some indications that the long awaited upturn could manifest itself towards the end of the year.'

Probably because conditions can't get worse, they begin to get less bad. Better economic times and falling interest rates cause the demand for construction to increase. Property prices begin to rise, and with it the demand for new premises.

Fast forward to June 2008: A number of factors have combined to create the perfect environment for construction companies:

Seemingly insatiable demand for commodities from China pushes a number of commodities to record high prices. Capital expenditure at mining companies and related industries is at a high as companies seek to capitalise on these high prices.

SENTIMENT IS A FICKLE THING

A number of construction-related companies have listed over the past two years to capitalise on renewed investor interest in the sector. From June 2000 to June 2008, an investment in any of Aveng, Group Five, M&R and WBHO has been spectacular, yielding a compound annual return of 35.4%, 51.7%, 54.4% and 59.2% respectively, including dividends.

Various arguments are made as to why margins are structurally higher today and will remain so into perpetuity. M&R's 2007 annual CEO letter states: 'We started with an operating margin of 2.2% in 2000, reaching the low end of our strategic range of 5.0% to 7.5% in 2004, and in 2007 we have breached that range at 8.0%. In view of current market conditions Murray & Roberts has set its margin target in the range of 7.5% to 10.0% for the foreseeable future.'

M&R's 2008 CEO letter states: 'Since 2002, GFCF has grown steadily relative to GDP, surpassing the critical 20% barrier in 2006 for the first time in twenty years en route to a government set minimum target of 25% by 2014. There is every reason to believe this growth will continue into the 2020s.'

Investors can only see blue sky. The major construction companies now trade at a substantial premium to TNAV and elevated earnings multiples on historically high earnings. This time is different.

As we now know, the optimism was short lived.

Where are we today?

Mining companies have curtailed their capital expenditure budgets materially in the face of declining commodity prices. Post the Soccer World Cup, public infrastructure expenditure has disappointed relative to expectations, and private construction activity has been subdued. Capacity created in the up cycle has led to excess industry supply. Competitive pressure has led to aggressive pricing, putting pressure on margins and causing some contractors to take on undue risk.

Compounding this negative effect, a number of the construction companies have incurred sizeable Competition Commission penalties for collusion during the good years, which has put additional pressure on their balance sheets and strained their relationship with government.

The industry is rationalising. A number of construction-related companies that listed in the good times between June 2006 and December 2007 have gone into business rescue or liquidation. This list includes Protech Khuthele, Sanyati, Sea Kay, Brikor, Alert Steel and Erbacon.

Large losses on mega projects have put considerable strain on the cash flow at select companies. This list of projects notably includes Gautrain, which was undertaken by M&R in a joint venture with Bouygues (a French company), and the pipeline for Queensland Curtis LNG (QCLNG), which was undertaken by an Australian subsidiary of Aveng. Each of these projects has resulted in billions of losses. Both M&R and Aveng have had to raise capital in the market as a result. Investors who bought shares in these companies on June 30, 2008 have lost 72% of their capital in M&R and 65% in Aveng, including dividends and rights issues. Importantly, while the cash losses have been incurred and the projects largely completed, both M&R and Aveng have sizeable claims against their clients. Such claims typically take years to resolve, and while the outcome is uncertain, a favourable ruling may result in a windfall reward for the patient investor.

M&R has once again disposed of 'non-core operations' and, in order to 'reposition' the business for growth, has increased its stake in Australian subsidiary Clough, the one division that is currently earning strong profits. Time will tell if this is a good capital allocation decision.

OPERATING MARGINS HAVE HALVED SINCE THE PEAK

Reported operating margins have halved since the peak and are now at or below long-term averages. The outlook is once again uncertain. WBHO's 2014 Chairman's letter states: 'On the whole, the construction industry has remained hampered by subdued conditions this year. The global reduction in mining related work continues to have a significant impact and, in South Africa specifically, the delayed rollout of the public sector strategic integrated projects and persistent low levels of gross domestic fixed investment are clearly having an impact on the economy and the industry.'

There remains excess capacity in the construction industry and it is impossible to predict when or if the cycle will turn. The sad reality is that despite a growing need for public infrastructure expenditure in SA, the size and speed of expenditure by government is likely to disappoint. Things may indeed get worse before they get better. Table 1 shows the share price and select metrics for the major construction companies at each time period discussed above.

Graph 2 shows the combined operating margin for the four large players and their combined adjusted earnings over the past 16 years. Earnings remain well below the peak achieved in 2009 but appear to be recovering from the bottom in 2012.

Graph 3 shows their combined market price relative to their combined TNAV over this same period. At spot, M&R, WBHO and Group Five all trade at a small premium to tangible book value. Aveng, which is currently incurring losses in its domestic construction business, trades at a higher earnings multiple, but half its book value. Using long-term average margins and flat revenue, each of these companies is trading on between 7x and 9x our estimates of normal earnings.

While we do not believe construction stocks to be as cheap as they were at the turn of the century, we do believe they are offering value once again. In particular we think they are attractive compared to the market which trades on 17x what we think are high earnings. 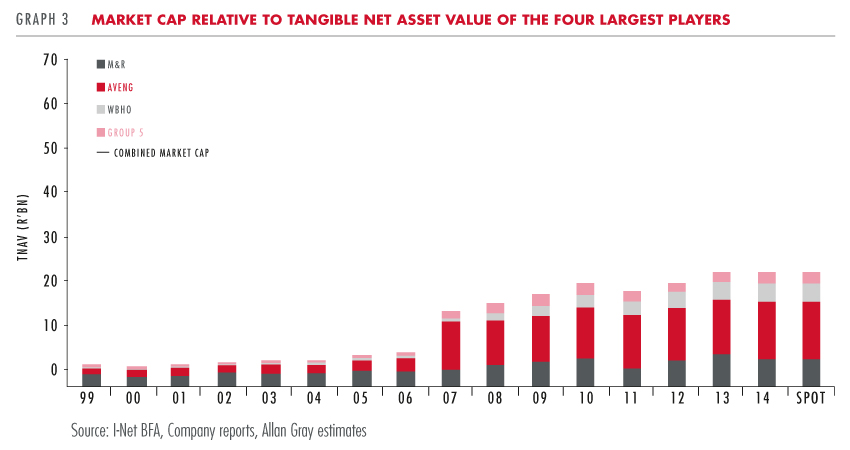 Rory joined Allan Gray as an equity analyst in 2008 and was appointed as a portfolio manager in 2017. He holds a Bachelor of Business Science degree in Economics and Finance from the University of Cape Town and is a CFA® charterholder.

Reflecting on our top equity holdings

The performance of the Allan Gray Equity, Balanced and Stable funds has been disappointing over the past couple of years. Low single-digit returns from...

Prosus marches forward: What should investors be looking out for?

An opportunity in television?

The Top 40 got a new member this quarter when MultiChoice was unbundled from Naspers. MultiChoice owns the dominant pay-TV business in South Africa, DStv, wi...

Our Tencent(s) on VIE structures

As at 28 February 2019, Naspers made up just over 18% of the FTSE/JSE All Share Index. Because of its dominance, including or excluding the share will have a...