South Africans who live and work abroad are not currently subject to income tax on the income they earn outside of South Africa, provided they spend more than 183 full days (including a continuous period of more than 60 full days) working outside of the country in any 12-month period. A proposed legislative amendment, set to come into effect on 1 March 2020, states that South African tax residents living and working abroad will be required to pay tax of up to 45% on their foreign employment income, if they earn more than R1 million during the year of assessment. But the government intends to offer tax relief in SA where the person’s income has already been taxed in a foreign jurisdiction.

There is a lot of confusion around tax residency and citizenship and how the proposed changes will affect different individuals. Sunèl Delport and Mlulami Nxele tackle some of the questions around these topics.

1. How do you determine your tax residency?

Maria, a qualified nurse who was born in Queenstown, decided to leave SA to pursue better salary prospects in Malta. She has signed a 10-year contract with a hospital in Valetta. She has her own apartment in Queenstown which she is renting out while she is away. The hospital where she works provides subsidised housing for staff. She eventually wants to retire in SA. After spending four years in Malta, she goes home for a long weekend and finds multiple letters from the South African Revenue Service (SARS), requesting that she complete her outstanding tax returns and pay an administrative penalty for the outstanding returns.

Maria decides to submit her returns via eFiling and one of the first questions she needs to complete asks whether or not she is a tax resident in SA. She decides to speak to a tax consultant and below are some of the questions and topics they discuss.

Am I a South African tax resident?

You are a tax resident in SA if either of the following applies to you:

What does it mean to be “ordinarily resident” in SA?

According to case law, you are ordinarily resident in SA if it is the country which you will, naturally and as a matter of course, return to after your wanderings. In other words, it is your real home. You could remain ordinarily resident for tax purposes in SA even if you leave the country for a substantial period, as long as you intend to eventually return to SA after your travels.

Your intention is a subjective matter and if you claim to be ordinarily resident in a country, all your surrounding actions and circumstances must support this claim. Factors that will be evaluated include:

How do I find out if I am a tax resident in a foreign country that I currently live in?

The Organisation for Economic Co-operation and Development (OECD) has a website where most countries have set out their own tests for tax residency relating to individuals and legal entities. You can access these here. Click on the country that you are living in to see the criteria for tax residency in that country.

Malta’s domestic legislation states that you are generally a tax resident if you spend more than 183 days in a tax year there, with an intention to establish residence. Maria is therefore a tax resident in Malta as well as SA.

I am a tax resident in more than one country – what now?

While it is possible for you to be a tax resident in more than one country, you can only be ordinarily resident for tax purposes in one country at a time.

A double taxation agreement (DTA) is an agreement or a contract entered into between two tax jurisdictions to avoid double taxation of the same amount earned by the same person. A DTA will help you determine in which (one) country you are ultimately a tax resident, and it sets out the rules about which country is allowed to tax particular income, and which country must provide tax relief for the tax already paid in the other country.

Since she is a tax resident in more than one country, Maria’s first step is to find out whether SA has a DTA with Malta. SARS maintains a list of all the DTAs that they have concluded with other countries. You can access these DTAs here. Click on “Double Taxation Agreements and Protocols” and then click on either “DTAs and Protocols (Africa)” or “DTAs and Protocols (Rest of the World)”.

Once you have determined that you are a tax resident in both countries and established that there is a DTA in place between the two, the DTA tie-breaker rules come into play. These rules will determine your “true” country of tax residence, i.e. the country in which you are ultimately a resident for tax purposes. The questions follow the sequence described below. You continue with the questions until only one country remains.

In the case of the Malta/SA DTA, the following tie-breaker rules apply:

Based on the tie-breaker rules, Maria is a South African tax resident, which means that her salary income is taxable in SA and, if the current proposals come into operation, her South African tax liability could potentially be reduced by the tax that she has already paid in Malta.

When do you stop being a South African tax resident?

Consider the tax cost associated with becoming a non-tax resident

Since the 2018 tax year, there is a question in the personal income tax return that specifically asks whether you have “ceased to be a resident of SA during this year of assessment”. If you have, the Income Tax Act deems you to have sold all your assets (excluding South African fixed property and shares in South African companies that are property rich), resulting in a capital gains tax liability. This is sometimes called an “exit charge”.

From the point at which you become a non-tax resident in SA, you will only be subject to South African income tax on your South African source income, not on any income earned in another country.

Exchange control (Excon) regulations determine the flow of money in and out of SA. This means that these regulations govern how much money you may take out of the country and under what circumstances you may take it out.

The regulations apply to the following individuals:

The South African Reserve Bank (SARB) grants all South African residents and emigrants an allowance of R1 million per calendar year, namely the single discretionary allowance, to use for any legal purpose offshore. If you want to take more than R1 million out of SA, you can apply for a tax clearance certificate from SARS to allow you to take up to an additional R10 million offshore. This is called the foreign investment allowance.

As a South African resident, you need approval from the SARB to emigrate from South Africa for Excon purposes (and become an emigrant). This process is often referred to as “formal emigration” and more recently as “financial emigration”. The two terms are used interchangeably to refer to the same Excon emigration process.

The difference in terms of your investments is that you can only withdraw from your South African retirement annuity if you formally emigrate. From 1 March 2019, you can also withdraw from your South African preservation fund if you formally emigrate, even if you previously made a partial withdrawal from the investment. Maria, therefore, is not currently able to withdraw her retirement savings.

There is a difference between emigrating from SA for Excon purposes (formal/financial emigration) and no longer being regarded a tax resident in SA. An emigrant may still be a South African tax resident according to the tax residency rules or tests. Formal/financial emigration could be one of the factors that support your claim for ceasing to be ordinarily resident in SA for tax purposes, because the declaration you make as an emigrant states that you permanently relinquish residency of SA to take up permanent residence elsewhere.

You can also be a resident temporarily abroad regardless of whether or not you are a South African tax resident. Your Excon status therefore has no direct bearing on your tax residency.

A citizen is a legally recognised national of a state or commonwealth. In SA, you can be afforded citizenship in three ways: By birth, through descent or naturalisation. A country grants certain rights and obligations to its citizens: Citizens can vote, access a country’s social services and live and work in the country without the need for a permit or visa.

You can be a citizen of SA with or without being a South African tax resident and/or South African resident for Excon purposes. This means that a South African citizen does not need to reside in the Republic in order to retain their citizenship status. Citizens of SA may also be citizens of other countries. This is referred to as dual citizenship.

Can a person lose their South African citizenship?

Can a person resume their South African citizenship?

Determining your tax residence can become quite complicated and depends on your unique circumstances. We have summarised some of the key concepts in Table 1 below, but we recommend that you seek advice from a South African financial emigration specialist if you are contemplating emigrating for Excon purposes. 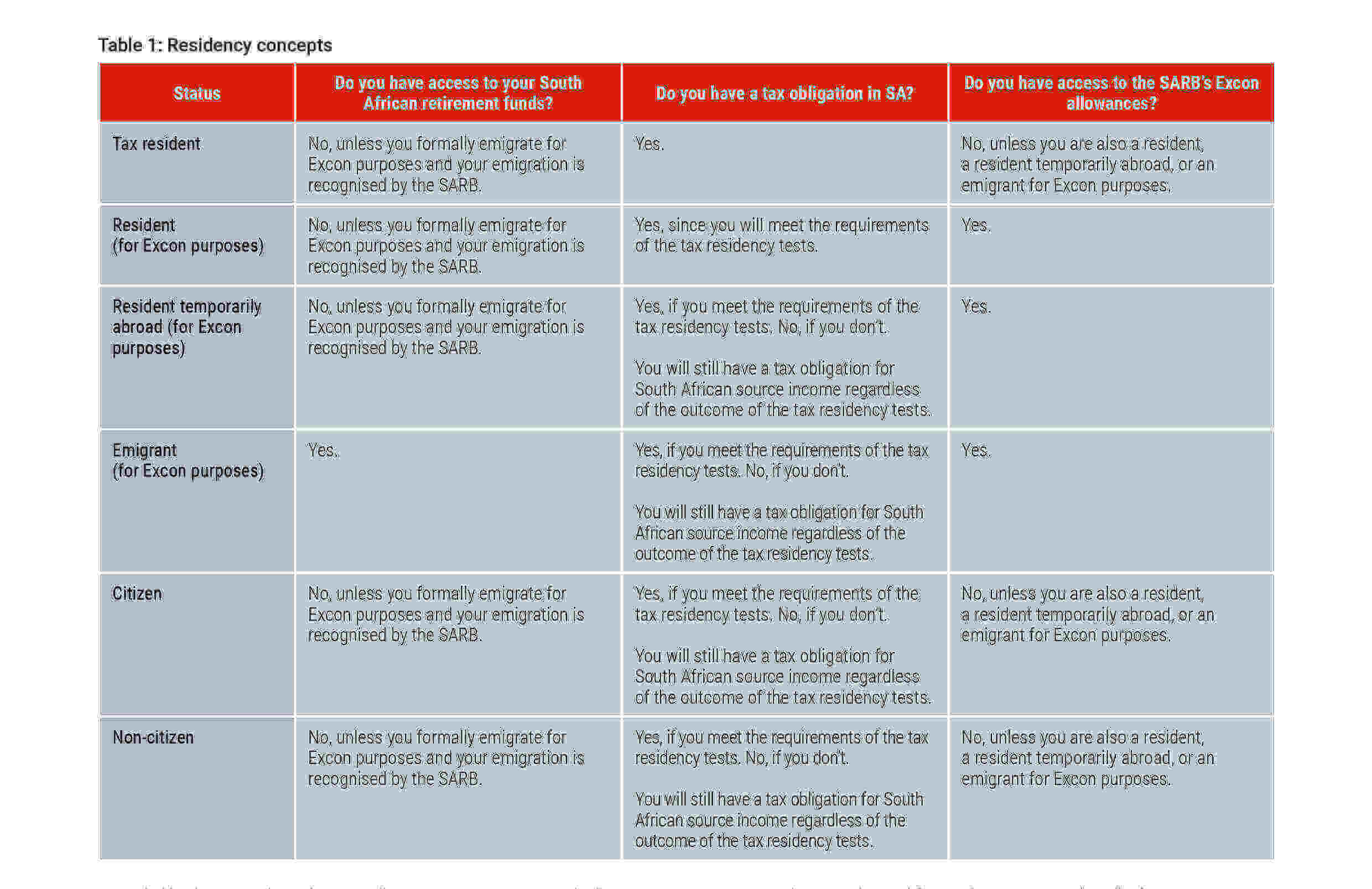 Mlulami was employed at Allan Gray from 2011 to 2020 and was a legal adviser in the Retail Legal team. He completed his articles of clerkship at Cliffe Dekker Hofmeyr. Mlulami holds an LLB Law degree from Nelson Mandela University and a Postgraduate Diploma in Financial Planning from Stellenbosch University. He was admitted as an attorney of the High Court in 2010.

In the first of six webinars in the Personal investing 101 series, Gugulethu Mfuphi chats to Allan Gray’s Faizil Jakoet, Chris Tisdall and Nomi Bodlani about...

Has your risk perception changed as a result of the market crisis?

Historically, deep economic shocks have prompted significant changes in investment and saving behaviour. During times of uncertainty, investors scramble to...

Money lessons from the arcade

Throughout Heritage Month, South Africans are encouraged to celebrate their culture and the diversity of their beliefs, histories, and traditions. In the...

Successfully building a legacy for our loved ones hinges on the strategies we put in place to achieve our financial goals. In the second of a two-part Zoom...