Despite all of the economic doom and gloom in our newspapers, South Africans are buying a lot of new cars.

Graph 1 shows that new vehicle sales have been on an upward trend since the low of 2009. This is in stark contrast to the savings rate, which is moving in the opposite direction, declining to -2.2% in 2013, according to the Finance Ministry. 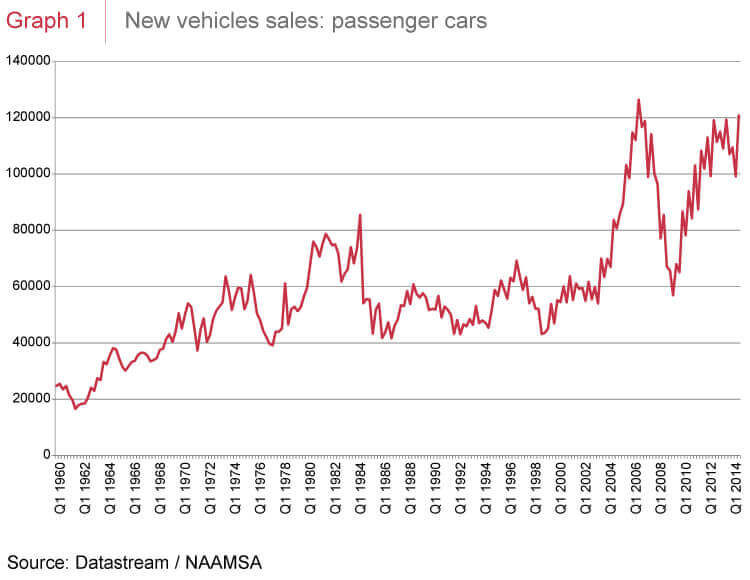 Why is it so hard to save?

We have all sorts of long-term goals and dreams, but in the short term we often fail to take the action that will lead us to achieve them. This is particularly true when it comes to our finances. Behavioural economist Dan Ariely explains that saving is hard because the benefit is long into the future. Although we know that we should save, the length of time before we are likely to see the effect of our actions makes the promise of a future reward vague.

Any balanced fund is almost undoubtedly a better investment than a new car. On average, cars depreciate by about 17% each year. Over the past 20 years, after fees, the average balanced unit trust fund has delivered returns of about 14% per year. Although past returns are no guarantee of future returns - a really pressing need for transport aside - it is clear which decision is better for one’s financial health over the long term.

A car is just one of many examples to illustrate that practicalities and emotions compete for pole position when we make spending versus saving decisions, with many of us finding it very difficult to direct money to tomorrow, rather than use it today. Various studies have looked at behaviour patterns and drawn conclusions about why we act the way that we do. One scale that has been developed by psychologists is called 'Consideration of future consequences’ (CFC), which measures the extent to which we are influenced by imagined outcomes. At one end of the scale are individuals who consider future outcomes as a matter of course and are willing to sacrifice immediate benefits for future gains; on the other side are individuals who are more concerned with getting pleasure now, despite the impact on their future.

Individuals who score highly on the scale typically focus on the consequences of their behaviour as opposed to their short-term needs. Individuals who think ahead to future consequences are more inclined to act in ways that protect their overall future well-being. If you have a high CFC, you are likely to, for example, not smoke or drink much alcohol, use sunscreen and recycle. You are also more likely to be inclined to save rather than spend, compared to your low CFC counterparts.

What can we do to change our behaviour?

Saving is good but it would make a boring existence to live only for the future and never spend your money: perhaps we should aim for the middle ground. Ariely suggests finding a compelling short-term incentive to get yourself to take the action that will get you a much larger reward further down the road. He suggests asking yourself the following questions:

His advice works because we are motivated by short-term rewards but also because they can distract us from short-term sacrifices. Consider, for example, delaying the purchase of a new car, investing the money instead, and rewarding yourself with a much smaller indulgence. Or buying a good second-hand car. Reward substitution can help you to make the strategic choices that allow you to enjoy the lifestyle you want, both now and in the future.

If you are lucky enough to get a bonus, consider starting a new investment, or make an additional contribution to an existing investment. Remember that the government offers tax incentives to save for retirement – if you have not taken full advantage of the tax benefits for the current tax year, you have until the end of February to make use of these incentives.

Chris is the head of Direct and Private Clients. He rejoined Allan Gray in 2014, having previously been responsible for our online platform and client experience between 2006 and 2010. He worked as a management consultant at Accenture and has launched two financial service start-ups. Chris holds a Bachelor of Business Science in Marketing from the University of Cape Town.

With interest rates and inflation on the rise, Cedrick Pila, regional manager, discusses how investors can achieve real returns and protect their savings and...

Navigating the impact of world events on your investments

In just two years, major world events have run a terrifying course, from a health pandemic and ensuing market and social distress to a geopolitical threat...