How to be a better long-term investor

Is your behaviour standing in the way of your investment success? Shaheed Mohamed helps us become more aware of common biases so that we can adjust our behaviour and improve our chances of achieving returns in line with those of our chosen unit trusts.

If a fair coin is tossed 10 times in a row and lands heads for each of the tosses, what would your choice be for the 11th toss? Many would guess heads, assuming that the current trend will continue. Others may choose tails believing that the trend must buck. But what has actually changed between the 1st and the 11th toss? Nothing – statistically there is still a 50% probability that it would land either heads or tails. So why favour one over the other?

When presented with information we interpret it according to our own biases, and then react to the information. Most of us are prone to drawing overly-strong inferences from previous, and especially recent, events or trends. The information during the first 10 tosses of the coin is irrelevant, as it has no bearing on the 11th toss – there is still a 50% probability of landing on heads or tails.

You have an opaque bag containing 50 black and 50 white marbles and you have to remove marbles one at a time without replacing them. There would be a 50% probability of selecting a black marble on your first go. If you had just removed 10 black marbles in a row, what would your guess be for the 11th go?

Most of us should select ’white’ because there is a higher probability of selecting a white marble than a black one – the odds moved from a 50% probability on the first attempt to a 56% (50/90) probability of white on the 11th attempt. Unlike the coin toss example, the information presented between removing the 1st marble and 10th marble is extremely relevant in guiding our choice for the 11th attempt.

Investor behaviour is driven by the psychological traps, triggers, and mistaken beliefs... that cause us to act irrationally and destroy wealth.

We are presented with a lot of information on a daily basis from which we have to make decisions. Fortunately our minds make things easier for us by using efficient thinking strategies known as ‘heuristics’ – mental shortcuts that help us make decisions and judgements quickly without having to spend a significant amount of time analysing the information. Mostly, heuristics allow us to respond rationally and effectively – like avoiding a pothole in the road. However, heuristics can also lead to errors in judgement, as we see from the coin toss example. Psychologists and behavioural scientists who have studied heuristics have categorised over 100 behavioural biases which lead to errors in judgement and irrational decision-making, including, over-extrapolation, anchoring (the tendency to rely too heavily on one piece of information), overconfidence, fear, greed and confirmation bias (the tendency to search for new information that supports one’s beliefs), to name a few.

These biases influence our success as investors

As we have discussed in previous articles, investor behaviour is a key determinant of investment success over time. Investor behaviour is driven by the psychological traps, triggers, and mistaken beliefs – because of over-weighting irrelevant information – that cause us to act irrationally and destroy wealth.

A study of investors in equity funds in the US over the last 30 years shows that the average investor underperformed the overall market by over 6% per annum (DALBAR, 2016). South African investors, on average, are no different. The lead up to the 2008 South African stock market peak and subsequent crash is evidence of heuristics at play. For the five years prior to the crash in May 2008 the stock market returned close to 36% per year. Investors flocked to the market in the hope of enjoying fantastic returns and in the process drove the market even higher.

Then came the Global Financial Crisis, which led to one of the worst sell-offs in our stock market’s history. The same biases that tempted investors in, led many to sell their investments and, in certain instances, materialise losses that would largely have been only on paper, had investors not succumbed to their emotions.

For the first three quarters of 2008, collective investment industry statistics show that R9 billion was withdrawn from equity and property unit trusts, and R34 billion flowed into money market funds. This irrational behaviour destroyed wealth for many investors who invested prior to May 2008.

Every action has a reaction

We all react differently to information presented to us and our reaction has a bearing on the outcomes we experience. Graph 1 reflects the value over subsequent periods of R10 000 invested at the peak of the market on 22 May 2008. The FTSE/JSE All Share Index (ALSI) including dividends, the Allan Gray Equity Fund, and the Allan Gray Balanced Fund lost (on paper) 45.4%, 29.6% and 14.2% respectively from the height of the market to the bottom. An investment of R10 000 in May 2008 would have been worth R5 465, R7 039, and R8 582 respectively at the market bottom in November 2008 (point A).

The ALSI, Equity Fund and Balanced Fund recovered after 2.5 years (D), 1.8 years (C) and 1.2 years (B), in absolute terms (i.e. not accounting for inflation), from the date of the crash. Investors who did not succumb to their emotions would have made back their losses and would have more than doubled their money in absolute terms by 30 September 2016.

By comparison, in an extreme case, investors who switched from the ALSI into cash at the bottom of the market would have R7 794 at 30 September 2016, significantly less than their original investment. In addition, their buying power would have halved as the investment has not kept up with inflation. 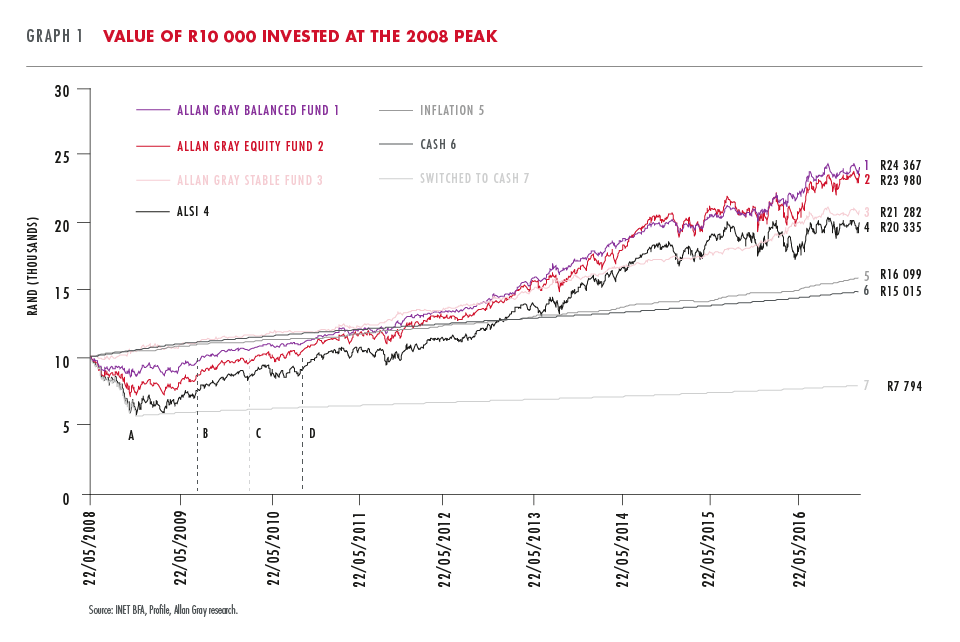 It must be noted that the strong recovery following the 2008 crash can be explained partly by central banks’ monetary policies helping to drive up asset returns globally. There have been market crashes in the past that have taken longer to recover in absolute terms and even longer when accounting for inflation. Table 1 shows the market crashes over the past 50 years and the length of time it took for investors to make back their money.

The Stable Fund returned 3.2% during the same period that the market crashed, doing what it says on its tin: protecting investors’ capital. We expect investors to choose the Stable Fund if they are risk averse and want stability. However, despite the Stable Fund being the most conservative of our asset allocation unit trusts, our research indicates that investors in the Fund are not immune to irrational behaviour. Graph 2 shows that there is a high correlation between 1-year performance (red line) and unit trust flows (grey bars). Again, as with the coin toss bias, many Stable Fund investors tend to over-extrapolate 1-year performance trends to inform their decision to withdraw or invest. The problem with this approach is that investors who withdraw after a downward trend (point A to B) do not receive the performance when it trends upwards again (point B to C), which is why they do not perform as well as the unit trusts in which they are invested. 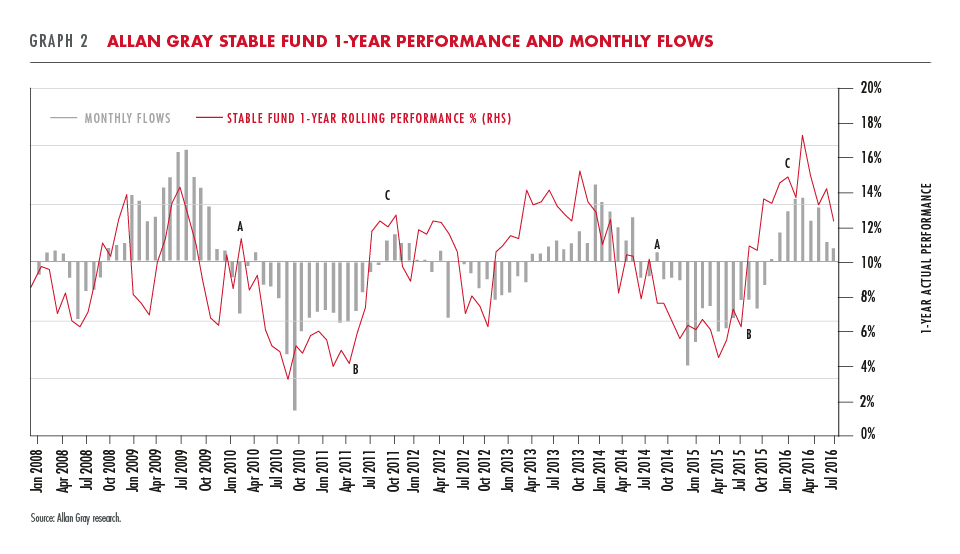 Investing is more like picking marbles than tossing coins

Many use the same heuristic when they invest as they do for a random coin toss, often resulting in a poor outcome. However, following a marble-from-the-bag approach, assessing information and using it when it is relevant, generally results in better outcomes. If you buy into the investment philosophy of your investment manager and understand the unit trust you are invested in, it is usually easier to sit tight through market cycles and benefit from the upswing when it comes. In fact, dips in performance are often a good time to add to your investment at a cheaper price, knowing, as you would in the marble example, that the longer the market is trending downwards, the more likely the approaching correction.

Be aware of your own behavioural biases and act rationally when making investment decisions.

Investor behaviour and heuristics, along with market and fund performance, determine investor returns. At Allan Gray we follow the same disciplined approach regardless of market conditions and work hard to find the best opportunities to deliver returns to our clients.

You also have an important role to play in determining overall returns: try to be aware of your own behavioural biases and act rationally when making investment decisions. Sticking to an investment strategy that is tailored to your goals, time-horizon and risk-tolerance will help take the emotion out of decision making. Your long-term strategy should not change when markets turn volatile. A good, independent financial adviser can help you to remain focused and stick to your goals when emotion threatens to get the better of you.