This piece was originally published in the Orbis March 2015 Quarterly Manager's Report.

Over the 25-year history of Orbis' Global Equity Fund, the underlying investment philosophy has not changed. We value businesses on a bottom-up basis and buy the shares of those that are priced at a significant discount to our assessment of intrinsic value. Assuming we are correct in our analysis, which is something we review throughout the life of each investment, we believe that the price of each share we've selected will come to reflect the underlying value of the business. What we are less sure of is the timing.

In some of the more painful periods, prices can become increasingly detached from the underlying value. These periods typically have some common characteristics. One such trait is the degree to which shares are 'trending', defined as the market in the recent past to continue to outperform, and vice versa. During these periods, it's more likely that your Fund's holdings, which are often unloved, ignored, or misunderstood by the market, will continue on their path of underperformance and move further away from intrinsic value.

Graph 1 plots the degree to which global shares have, on average, trended since the mid-1990s. As one would expect, the late 1990s saw a high degree of trending as technology, media, and telecommunications (TMT) shares outperformed consistently for multiple years. It was a classic example of share prices becoming detached from the reality of their fundamental value, and your Fund, along with those managed by many other value-oriented managers, struggled to keep up with the broader stockmarket. The most recent period, which spans the end of the global financial crisis until today, has also been a strongly trending market. That's not to say that our own mistakes did not contribute to below-par performance in either of these periods, only that there have been other headwinds that have been less under our control.

BY FOCUSING RELENTLESSLY ON INTRINSIC VALUE... WE CAN EARN OUR KEEP AS STEWARDS OF YOUR CAPITAL 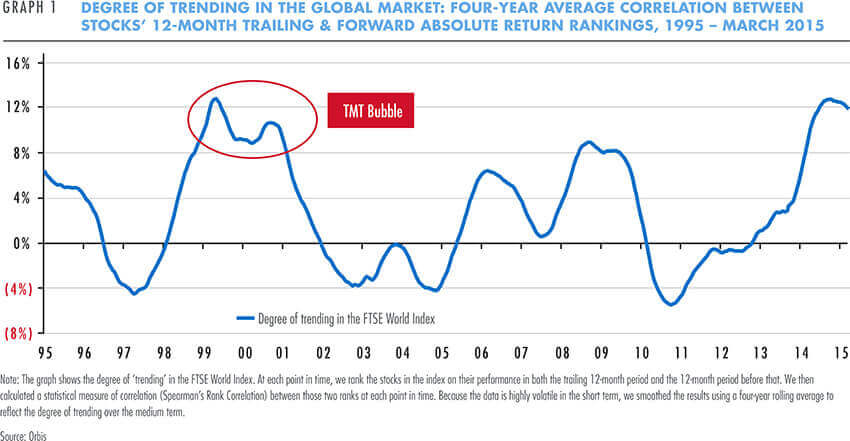 This is an emotive graph, as it hints at the potential for a similar valuation dislocation to that witnessed before the TMT bubble began to burst. We wouldn't go that far. For one, the extreme trending in that period was sustained for a few years longer than we have seen recently, and is a stark reminder that today's trending environment could be far from over. However, the graph does illustrate that the trending effect has been abnormally strong. Part of this has been driven by extreme measures taken by central banks in the wake of the global financial crisis. Regular liquidity injections have led to asset inflation as the incremental money supply has fuelled further inflows into the recent winners, which has in turn sustained the momentum.

A second and related dynamic is the hunt for positive real return and yield. Real interest rates are negative in many countries (indeed, nominal interest rates have turned negative in some) and many 10-year plus bonds, both sovereigns and some corporates, now offer negative real yields. Loss aversion is a well-known factor in psychology and behavioural finance. Investors are more likely to take on risk when the alternative is a certain loss. If investors cannot generate a positive real return in safer assets, then they will move their money to other assets where positive real returns are possible, albeit far from guaranteed. This is a recipe for asset bubbles, and the assets that have benefitted the most this time have been those with stable 'bond-like' characteristics such as high-yielding equities in defensive businesses. The more aggressive central banks have become, the more investors have flocked to the apparent 'safety' of these assets, which has also sustained the trend.

This trending effect explains why we have found fewer and fewer opportunities in those areas of the market that are well-liked by many others, and why not owning those same shares has been costly to your Fund's relative performance. The encouraging flip side is that the major laggards are beginning to look particularly cheap on a relative basis. Although the Global Equity Fund is not as heavily skewed toward laggards as it was during the two previous extremes (the early 1990s Japan equity bubble and TMT bubble of the late 1990s/early 2000s), we are finding ourselves increasingly drawn to the more neglected areas of the market (see Graph 2). 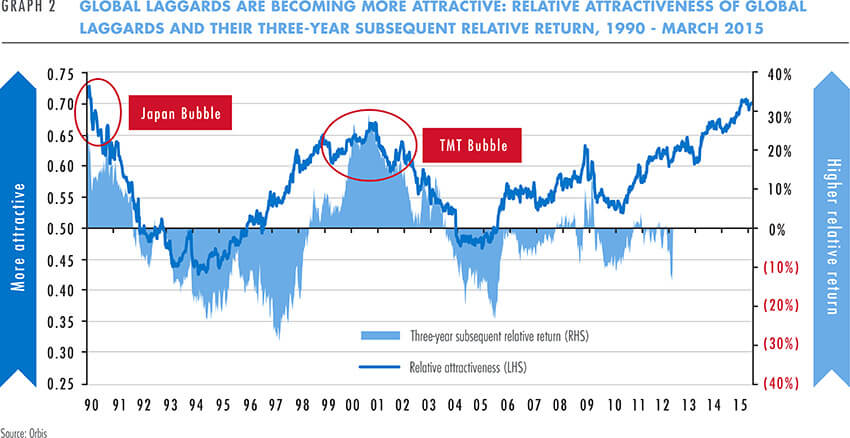 Korean equities, which we have written about in previous commentaries (see my piece in Quarterly Commentary 4, 2014), fall squarely into the laggard bucket. Global has for some time been significantly overweight in Korea, roughly 10% versus the benchmark, driven by our Asia ex-Japan analysts' strong degree of conviction in these stock selections. Generally speaking, Korean share prices remain depressed at least in part because they have not benefitted from either of the factors that we believe have contributed to above normal trending in global markets. Korea has not implemented quantitative easing, and Korean asset prices have seen muted direct benefit from capital inflows stemming from aggressive easing in other economies. And with Korean companies paying, on average, just 10-15% of their net income in the form of dividends (something we believe will gradually improve over time), the market offers little appeal for yield seekers. For bargain hunters, however, Korea has a lot to offer. At current levels, our favoured Korean shares are trading comfortably below 10 times what we consider to be normal earnings. While future growth will be challenging for many of these businesses, our view is that valuations more than discount this outlook. In the US, on the other hand, sentiment is ebullient, with the market's valuation now above 17 times next year's estimated earnings - and those earnings are arguably above normal levels.

Aside from Korea, your Fund's exposure to laggards is spread across a range of other shares. An example of a laggard we hold in Europe is The Royal Bank of Scotland (RBS). As is the case with the Fund's Korean holdings, RBS has generated little interest from yield-seeking investors, being both leveraged and having not paid a dividend since the final quarter of 2007. However, a new management team is in the process of shrinking the balance sheet, which is delaying the payment of dividends and obscures the true value of the underlying franchises. As the restructuring comes to a close, we expect RBS to emerge as a well-capitalised bank with excellent profitability and a solid dividend payout ratio. We believe the shares will deserve a premium to net asset value, or certainly more than the current valuation of just 0.7 times net asset value.

Of course, the laggards may continue to lag and we can never know how or when it will end. As George Charles Selden wrote over 100 years ago, 'it is exhaustion of liquid capital that brings the bull movement to an end', and the market doesn't appear to be short of liquid capital for the time being. What we do know for certain is that momentum-driven markets have typically ended badly in the past. By focusing relentlessly on intrinsic value, it is during these times that we can earn our keep as stewards of your capital.

Graeme joined Orbis in 2007 following the completion of his degree. He is responsible for the Orbis International Equity and Optimal Strategies and is a director of Orbis Holdings Limited. Graeme holds a Master of Arts (Honours) degree in Mathematics from the University of Oxford and a Doctor of Philosophy degree in Mathematical Epidemiology and Economics from the University of Cambridge. He is also a CFA® charterholder.

WATCH : Orbis Global Balanced Fund: A tour of the portfolio

After the extraordinary performance of 2020, global stock and bond markets both appear unusually expensive. From this starting point, long-term returns for...

There is currently a ballot underway for the Allan Gray-Orbis Global Fund of Funds (“the Fund”) which proposes changes to the Fund’s structure, name and...

The benefits of neglect

Orbis: Harder to get into than Harvard

If 2020 was an emotional roller coaster, the first month of 2021 provided a peek inside the darker corners of the funhouse. We remain hopeful that more...