Our offshore partner Orbis launched an Emerging Markets Equity Strategy in January 2016. Later that year it broadened the mandate of its Asia ex-Japan Equity Fund to include all emerging markets. This was done in the belief that emerging market equities offered excellent long-term investment opportunities. Initially the timing looked foolish, as emerging markets continued to underperform. However, since then they have rallied, with most of the good performance coming in 2017. To date this year, the Strategy has lagged the broader market. Woojin Choi explains how Orbis invests, and examines the recent market environment.

We build the portfolio by comparing the attractiveness of individual ideas. Our favourite ideas have the highest weights, and if we aren’t confident that a stock trades at a discount to its intrinsic value, we don’t buy it at all.

This competition for capital has little to do with a stock’s weight in the benchmark, which naturally increases if the stock outperforms. Attractively priced shares could be small index constituents, or they might be big in the benchmark. In building the portfolio, benchmark weights don’t really matter to us. But they do matter when calculating relative returns. Since the portfolio can differ substantially from its benchmark, so too can its performance, especially in the short term.

Taking a fine-tooth comb to  the market gives us the opportunity to avoid low-quality companies.

“Mega-cap” outperformance has been a notable feature of emerging market (EM) stock markets so far this year. The MSCI EM Index comprises over 800 stocks, but its five largest constituents – currently Tencent, Samsung Electronics, Alibaba, Taiwan Semiconductor Manufacturing Company (TSMC) and Naspers – make up nearly 20% of the total capitalisation. These five companies’ shares have performed particularly well, as shown in Graph 1. 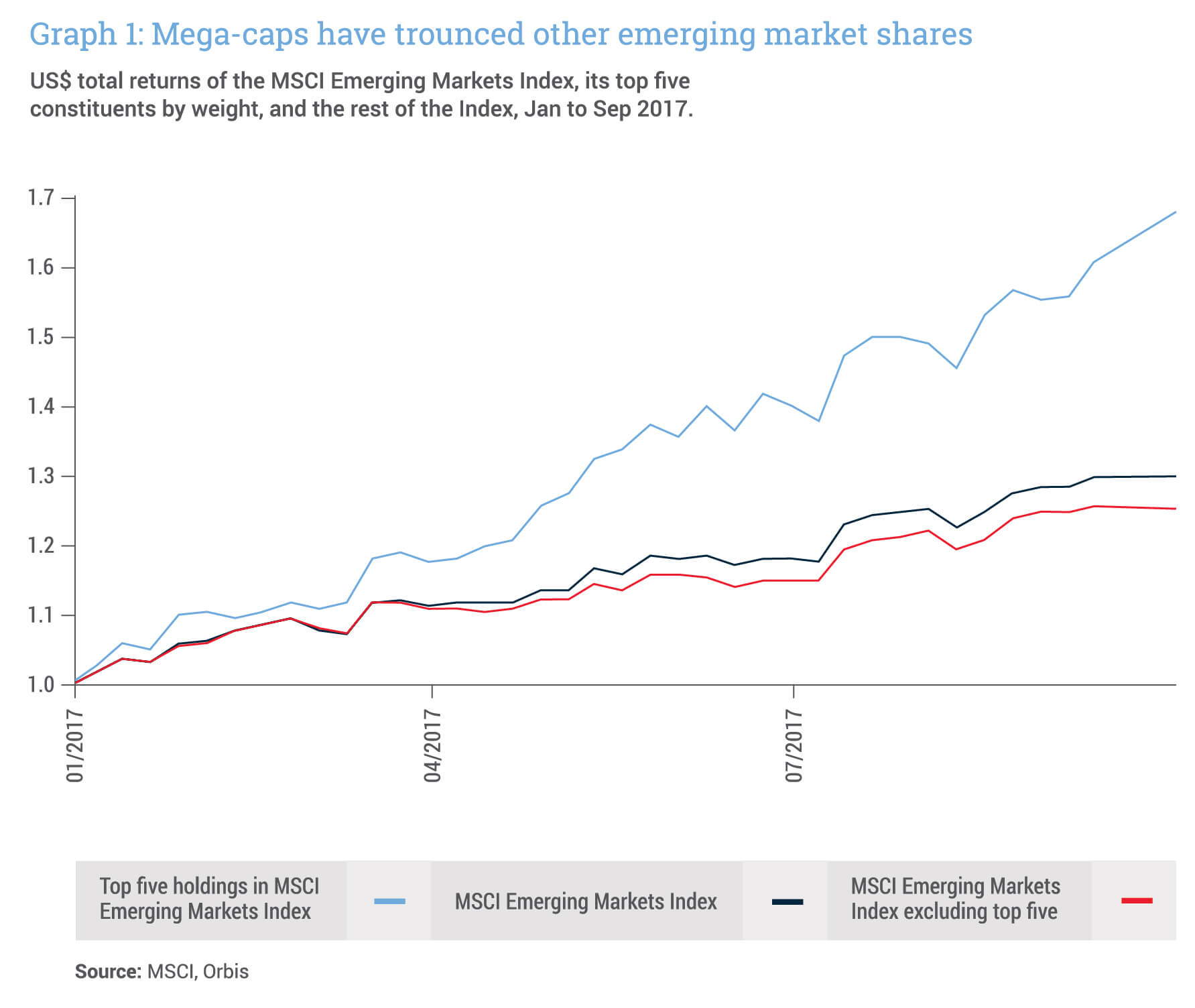 It has been difficult to generate outperformance without being overweight these stocks: in the first nine months of this year, less than 40% of all EM shares outperformed – the lowest proportion in any calendar year since 2005.

The surge in mega-cap shares may well have resulted from large inflows into EMs from global investors seeking higher returns by buying the largest and most liquid EM shares. So far this year, tens of billions of dollars have flowed into EM equities.

These trends could persist, but rather than try to predict the magnitude and direction of EM flows, we prefer instead to focus on our core skill: assessing the relationship between the share price and fundamentals of individual businesses.

A selective approach allows us to invest in a collection of businesses that must each stand up to careful scrutiny.

This approach resulted in the Orbis Emerging Markets Equity Strategy holding four of the five mega-cap shares at the start of the year: Tencent, Samsung Electronics, Naspers and TSMC. When we stacked them up against other opportunities, they  were  attractive  enough  to  earn  a  place  in the  portfolio, but they  were not  the  very best ideas we could find. As a result, they collectively accounted for less than 10% of the Strategy. While many of the mega-cap shares have subsequently increased their intrinsic value, we continue to believe that other EM shares – which have lagged the mega-caps – continue to look more attractive from a long-term perspective.

A similar story has played out in individual countries, particularly Korea. Samsung Electronics is the goliath of the Korean stock market, accounting for over a fifth of the local market index. The Korean stock market has performed well this year, and its 20% absolute return has been largely driven by a more than 40% return for Samsung. The Strategy owned Samsung’s shares until the end of the first quarter of 2017, when it exited the position. Samsung remains held in other Orbis Strategies which have different mandates and opportunity sets.

A stock’s potential determines its weighting

We think it is imperative that a stock’s long-term return potential is the key factor that determines its weighting in our portfolios. By contrast, passive funds – which aim to be invested in the benchmark and have attracted five times more capital than active funds in EMs this year – are insensitive to the price they pay for shares and, by their very nature, support outperformers. We make them compete for capital on the same terms as every other share. As Samsung delivered strong performance, we reallocated capital to other attractive EM shares.

We have found greater value in shares like Kiwoom Securities, a leading Korean online brokerage company, and a 4% position in the Strategy. Throughout its history, Kiwoom has grown its intrinsic value faster than the market by dominating online brokerage – where it  claims  25%  market  share  –  and  proactively seizing new business opportunities in mutual savings, banking and asset management. Over  the past decade, its return on equity has averaged 15% per annum and we believe it can sustain this performance over our long-term investment horizon, yet its market value is a modest 1.1 times the value of its net assets. Kiwoom faces significant risks – including that of a conflict with North Korea – but we believe the balance of risk and potential long-term rewards is favourable.

Our bottom-up, fundamental stock-picking approach is well suited to capitalising on investment opportunities in EMs

Taking a fine-tooth comb to the market also gives us the opportunity to avoid low-quality companies particularly relevant in the EM universe, where corporate governance and transparency standards diverge meaningfully. Kiwoom’s management team retains a meaningful ownership stake, which we view positively because we look to align ourselves with high-quality management teams that have “skin in the game”. Yet this has the effect of lowering the company’s “investible” market capitalisation, and with it the stock’s weighting in the benchmark.

Our conviction that our bottom-up, fundamental stock-picking approach is well suited to capitalising on investment opportunities in EMs is even stronger today than when we launched the Strategy. A selective approach allows us to invest in a collection of businesses that must  each stand up to careful scrutiny to earn their place in the portfolio – a competition for capital that we believe bodes well for long-term returns.

Woojin joined Orbis in 2007 following the completion of his degree. Based in Hong Kong, he is a member of the Emerging Markets Investment team, with primary responsibility for researching Korean equities. Woojin holds a Bachelor of Business Administration degree from Yonsei University and is a qualified Chartered Accountant. He is also a CFA® charterholder.