After growing strongly for 10 years, since 2012 the South African economy has been stagnating, which prompts the question: What has gone wrong and how can this be fixed? Sandy McGregor suggests looking back to find a way forward.

A decade of prosperity

South Africa's prosperity in the first decade of this millennium can be attributed largely to two underlying factors. The first was the government's decision in 1997 to embrace fiscal prudence. This was the much maligned Growth, Employment and Redistribution (GEAR) programme, which involved matching government expenditure with revenues. It required considerable political courage to embark on such a programme. Not enough credit is given for the fact that it proved triumphantly successful, creating an environment which allowed a decade of above-average growth. GEAR enabled South Africa to reap considerable benefits from the subsequent boom in commodity prices, which was the second of the two factors promoting rapid growth.

It is no coincidence that South Africa's recent period of strong growth coincided with an emerging market boom. Rapid growth in emerging markets, in particular in China, gave rise to unprecedented high commodity prices. The annual value of South Africa's exports rose from US$31.6bn in 2002 to US$98.4bn in 2011. This three-fold rise in exports is shown in Graph 1. The recovery of exports after the 2008 global financial crisis (GFC) was particularly impressive.

WHAT IS MOST CONCERNING IS THAT WE CANNOT COUNT ON A RECOVERY IN COMMODITY PRICES ANY TIME SOON. 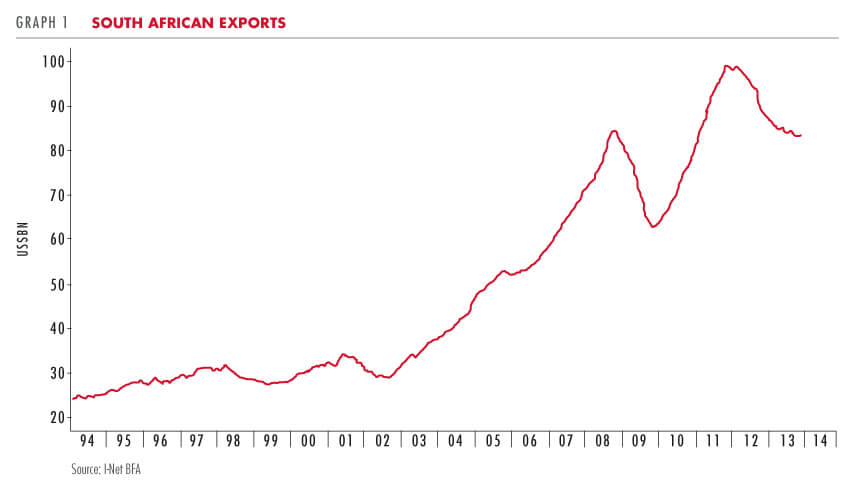 The commonly used acronym for the debacle in 2008, ‘GFC’, is actually a misnomer. It would be more accurate to describe these events as a ‘developed economy financial crisis’. After a brief recession the emerging markets bounced back, and continued to expand rapidly into 2012. Only then did growth falter under the pressure of rising debt and, in certain cases, deteriorating current accounts. This slowdown was precipitated by unsustainable imbalances within the emerging economies themselves, and had little to do with problems in developed economies.

In September 2012, I wrote how market participants were focusing too much on events in the developed countries, when a key determinant of global economic conditions was slowing growth in emerging markets, which account for the majority of global growth. This theme remains crucially important for South Africa. Contagion from the emerging markets has contributed to weak growth in our most important trading partner, Europe. Commodity prices have declined significantly as a consequence of slower growth in developing countries. The value of South Africa’s exports, which are largely commodities, is currently 22% off its peak.

Growing export revenues is a necessary condition for sustainable growth in South Africa. The surge in domestic spending between 2004 and 2007 was only possible because there was a commodity boom. This positive situation was reinforced by the fact that, as a result of the GEAR strategy, fiscal deficits were well contained, and the government did not crowd the private sector out of debt markets. South Africa's limited pool of savings could be fully dedicated to supporting economic growth.

These conditions, which were so favourable for growth, have now reversed. First to go was fiscal discipline. Following the crisis of 2008, government revenues contracted. The Zuma administration does not have the same resolve as the Mbeki administration had to keep spending under control. The number of government employees and their salaries has increased significantly. South Africa has become locked in a cycle in which fiscal deficits have averaged about 5% of GDP. Government again absorbs a significant proportion of domestic savings. The growing remuneration of public sector employees initially boosted consumption and promoted growth, but these temporary and ephemeral benefits have proved unsustainable.

Since 2012 declining export revenues have taken their toll. A rising current account deficit has weakened the rand, eroding real personal incomes. Mining investment has contracted. The machine that was driving growth has switched off.

These economic woes are most clearly manifest in our large current account deficit, currently 6% of GDP. Given an infrastructure backlog, inadequate education system and poisonous labour relations, South Africa faces huge problems that will take years to fix. An economy continually adjusts to new realities. Given the inflexibility of the economy, the rand exchange rate has to bear the brunt of this adjustment process.

What is most concerning is that we cannot count on a recovery in commodity prices any time soon. Commodity price booms, such as the one we have recently enjoyed, are infrequent events. New ideas and actions soundly based upon economic realities are needed to generate the higher growth rate we desperately need.

What will get South Africa growing again?

It is an unfortunate truth that the relationship between government and business in South Africa has become dysfunctional. Neither party trusts the other.

The study of economic history suggests that an inevitable consequence of a government's hostility to business is slower economic growth. One of the most interesting examples of this truism is found in the United States in the 1930s. While historians applaud President Franklin Roosevelt's New Deal as the miracle cure to the deep depression of 1931-32, the reality is that the US economy performed poorly through the 1930s when benchmarked against other countries. An important reason for this was Roosevelt's hostility to business. Aggressive regulation and taxation had a devastating effect on business confidence and private sector investment suffered as a consequence. By way of contrast, in the same decade Britain, which had a pro-business government, had one of the best-performing economies. In 1939 as World War Two approached, the US economy reverted to its normal buoyancy. Key to this change in fortunes was not the demand for armaments, but rather the recognition by Roosevelt that he needed the support of business to win the approaching war. Accordingly, he reversed his anti-business stance. A close working relationship between business and government became the key driver of US prosperity over the next 30 years.

Recently France has provided two more examples of how damaging an anti-business government can be to an economy. Both President Francois Mitterrand in 1980 and currently President Francois Hollande entered office on a wave of anti-business sentiment. Both were forced by rapidly deteriorating business conditions to reverse this stance within two years.

A reinvigorated private sector is the key to breaking out of our present malaise and achieving more rapid growth. Currently the private sector faces serious challenges. A plethora of new regulations and government programmes, almost all of which increase the cost of doing business, makes it difficult to justify new investment. South African companies are investing, but increasingly their focus is on expanding internationally, especially in Africa, north of the Limpopo. Private Sector investment within South Africa is focused on increasing productivity to compensate for above-inflation wage increases. The cost of excessive wage demands is reduced employment. South Africa is trapped in a cycle of anaemic growth, which does not create jobs. To escape stagnation, this vicious downward spiral needs to be broken.

The simplest way to fix the South African economy is to learn from history and to promote an environment which allows the private sector to prosper. Investment, job creation and rising tax revenues, which will allow government to achieve its ambitious social agendas, will follow. Introducing the GEAR policy required political courage. The same courage is now needed to create a business-friendly environment.