Welcoming the world to South Africa (but are they here to stay...?)

For most of the time since our first democratic election in 1994, foreign investors have been net buyers of companies listed on the JSE. They are now significant (and, in many cases, majority) shareholders in JSE-listed companies. There have been only two periods of significant net selling by foreigners (2002/3 and 2008/9) since 1994, and both coincided with important lows in our stock market. Valuations on the JSE are currently not nearly as attractive as they were at these lows, and we are thus carrying a relatively lower equity weighting in our asset allocation portfolios at present.

The foreigners arrived at our stock market before our stadiums

I am writing this article on the eve of South Africa's opening World Cup match against Mexico. Hopefully, the vuvuzelas are heralding another important step away from our divided past and towards claiming our place in the international community.

But most ordinary South Africans would probably be surprised by the extent to which our stock market has already been embraced by foreigners since our first democratic elections in 1994. A simple analysis of the top 100 companies listed on the JSE illustrates this point.

Of the top 100 companies, 11 have a primary or dual listing in Europe (mainly on the London Stock Exchange) and, although South Africans are still significant shareholders in these companies, they are generally in the minority. For example, South Africans now own only 19.5% of SABMiller (our clients collectively own 5% of SABMiller). The other 10 companies are: Anglo American, BHP Billiton, Richemont, Old Mutual, Investec, Capital Shopping Centres, Reinet, Mondi, Lonmin and Didata. Most of these are now multinational businesses, with some significant South African subsidiaries.

A further 10 of the top 100 companies are subsidiaries of multinational companies with only a minority shareholding trading on the JSE. These companies, with the parent company indicated in brackets, include: Anglo Platinum (Anglo American), ABSA (Barclays), Nedbank (Old Mutual), Kumba (Anglo American), Vodacom (Vodafone), ArcelorMittal SA (ArcelorMittal), Illovo (Associated British Foods), Afrox (Linde), Highveld (Evraz) and Palabora Mining (Rio Tinto). Although they are not majority-owned, Aspen (GlaxoSmithKline), Standard Bank (ICBC) and Goldreef / Tsogo (SABMiller, on finalisation of the merger) all have significant strategic multinational shareholders.

The 24 companies listed above tend to be bigger companies, and so collectively they account for just over half of the free float market capitalisation of the FTSE/JSE All Share Index.

But that is not where the story ends. Foreign shareholders account for more than 20% of the shareholders' register in many of the remaining 76 companies. These stakes tend to be portfolio investments by foreign institutional investors and emerging market index-trackers. In some cases, foreign portfolio investors currently own more than half of some iconic South African companies (with percentage of shares held by foreigners estimated in brackets): Anglogold Ashanti (75.8%), Goldfields (75.5%), Harmony (56.4%), Impala Platinum (50.4%), Naspers (54.3%), Murray & Roberts (61.1%), Massmart (69.3%), Truworths (58.9%).

THE TWO MOST IMPORTANT LOWS IN OUR STOCK MARKET OVER THE LAST DECADE...BOTH OCCURRED...WHEN FOREIGNERS WERE NET SELLERS

Who will be on the other side of the trade if foreigners decide to sell?

If one assumes that South African companies are generally unlikely to sell their foreign operations, and that South African pension funds will probably always want to utilise the bulk of their 20% offshore allowance for diversification purposes, then that raises an interesting question. Who will be on the other side of the trade if/when foreign investors decide to sell some of their South African shares?

Graph 1 provides a simple answer. The two most important lows in our stock market over the last decade (in 2002/3 and 2008/9) both occurred at a time when foreigners were net sellers. We should not be surprised when our trading desks are quiet on British and American public holidays. Likewise, we should not be surprised to see short- term swings in our market being dictated not only by foreign investors' perceptions of South Africa (and emerging markets) as an investment destination, but also by their perceptions and reactions to matters that do not have much to do with us, but which are important to them (such as liquidity/debt constraints and asset allocation). 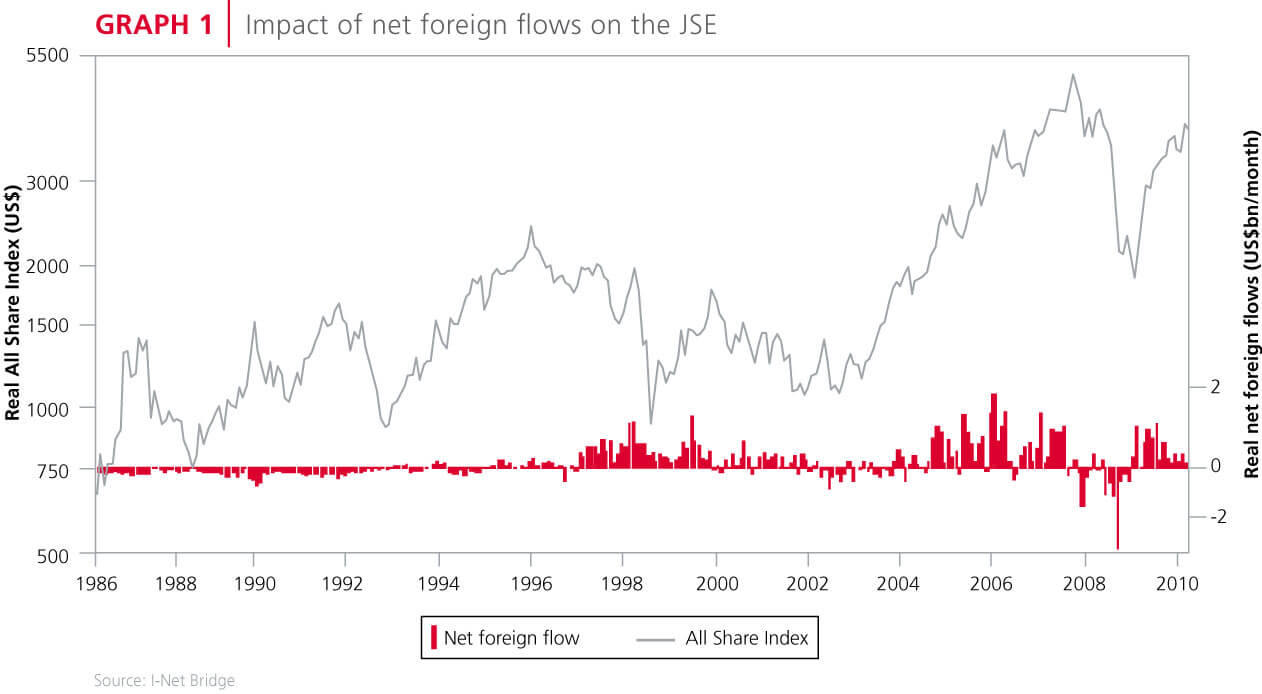 Even if the net portfolio inflows from foreign investors were merely to dry up, rather than turn negative, this would probably impact on the current equilibrium of the country's balance of payments and on the rand. Graph 2 shows that the rand is currently stronger than its historic average versus the US dollar on a long-term inflation-adjusted basis. We should remember that foreigners are investing in South Africa today for future returns, in the form of dividends, which will have to be paid out from the country and will thus become an increasing drag on our balance of payments in future. 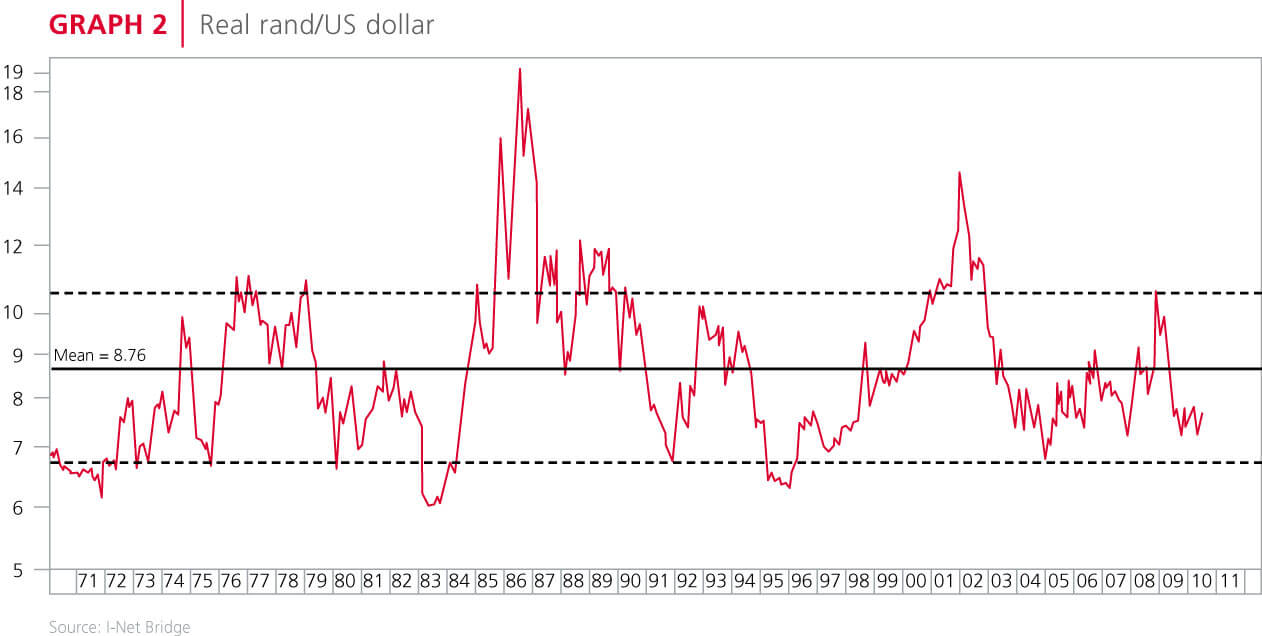 How does all this affect us at Allan Gray?

Very importantly, our investment philosophy and process remain the same. We strive to be disciplined valuation-based investors, taking advantage of bouts of excessive investor pessimism to buy companies at a discount to their intrinsic value. The present optimism and confidence of foreign investors has helped to push valuations on the JSE to much higher levels than at the lows of 2002/3 and 2008/9. We thus have a relatively low equity weighting in our asset allocation portfolios at present.

Ian joined Allan Gray in 2001 as an equity analyst after several years as a management consultant. He managed a portion of client equity and balanced portfolios and was the chief investment officer from 2008 until 2016. He is now chairman of Allan Gray Proprietary Limited and is a CFA® charterholder.