When the Allan Gray Africa Equity Fund (the Fund) was launched on 1 July 1998 it was the first unitised product in which Allan Gray Proprietary Limited was involved. As the Fund celebrates its 15th anniversary, Andrew Lapping and Nick Ndiritu look back and consider how the market has changed. The Fund is domiciled in Bermuda and invests in South Africa (as well as the rest of Africa), so it is unfortunately not open to South African investors due to exchange control restrictions. The Allan Gray Balanced Fund holds small positions indirectly in Africa outside of South Africa.

The 15-year period prior to the Fund's launch in July 1998 saw a somewhat miserly price return of 2% (annual rate) above inflation for the FTSE/JSE All Share (ALSI). Then, over the next three months, the market fell 22%, erasing the 2% annual gain. At that point, in October 1998, the 30-year real return of the ALSI was 0% excluding dividends.

The experience of equity investors over the 15-year period since 1998 has been somewhat different, with the ALSI price return exceeding inflation by 7% per year. Earnings growth was the primary driver of the recent 15-year returns, with the ALSI earnings growing 12.7% (6.8% real) per year. Put differently, the earnings of the market increased six-fold over the period. This is a very rare occurrence; indeed, as noted above, there have been long periods in South Africa when earnings have failed to grow or have in fact declined. The JSE is not unusual in this regard. Real earnings growth has contributed a little over 1% a year to the return of the S&P 500 over the past 110 years, and not once during that period did real earnings growth average more than 6.5% over a 10-year period, let alone over 15 years.

1998 was a period of substantial valuation discrepancy within the JSE, as shown in Graph 1. The Resources sector was hugely out of favour, while the Financial sector was loved by investors. As readers familiar with our contrarian investment approach would expect, nine of the Fund's top 10 holdings were in Resources, while the Fund did not hold a single Financial share. Financials, especially the small banks, were seen as the growth sector. In early 1998 the Banking Index traded at 25 times trailing earnings. In contrast, there was substantial value in the Resource sector. Commodity prices were in a bear market, and had been since 1974, and Mining shares were seen as 'old world' compared to the high-flying Financial and IT shares. The multiples on some of the commodity shares were not particularly low, but earnings were very depressed and the holding company structures attracted discounts. So an investor could buy cheap assets through the holding companies which attracted discounts of up to 40%. Almost all of these holding company structures have since disappeared; in fact only two of the original top 10 Fund holdings still exist in the same form. 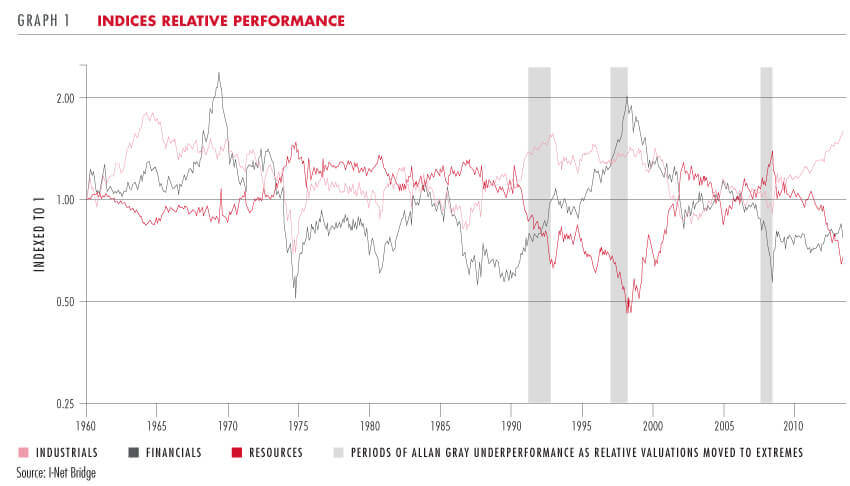 Some things change, some stay the same

With current high prices it may be difficult to see how assets could ever offer such compelling value as they did in 1998. It is easy to think that things have changed, that investors are smarter and that there will never be similar opportunities again. But it is important to remember that people do not change; this is the one constant of asset markets. It is also important to remember to be patient - opportunities will arise, but they are almost never obvious at the time. When assets are cheap it is usually for what seem to be very compelling reasons. It is only with the passing of time that reasoning may be shown to be accurate or flawed.

We have adjusted the Fund's focus somewhat over the past three years in an effort to find more value opportunities. Up until 2011 the Fund invested practically 100% of its portfolio in South African equities, but we have been steadily moving its asset allocation towards shares listed in other African markets. Only 35% of the Fund's holdings are domiciled in SA at the moment because of the better value we see in shares listed in other African markets. The African companies we are investing in have lower earnings and the multiples investors are placing on these earnings are far more reasonable when compared to South Africa. Many investors are very positive on the outlook for African equity markets, excluding South Africa, as the consensus forecast is for strong GDP growth in the medium term. As discussed in Quarterly Commentary 4, 2011, evidence indicates that the correlation between GDP growth and equity market returns is very weak and using GDP forecasts to inform equity allocation is a dangerous business. Being value managers we have increased our allocation to African equities as we are finding better value in these markets when compared to shares listed in South Africa, not because we have a particularly positive outlook on the GDP growth prospects. When looking for shares to buy we look at the company specific attributes, such as the competitive environment and the sustainability of earnings, and we then decide on a fair price for these normal earnings. Using this method we determine a fair value for the share and then compare the fair value to the market value to determine the attractiveness of the investment. As it happens, we are currently finding far more shares trading at a discount to fair value in the rest of Africa than in South Africa.

The advantage of being able to invest across the African continent is that shares in many African markets are not carefully researched by investors and the markets are very retail driven, so large discrepancies between fair value and market value can open up. Short-term news events often drive the disparities between fair and market value. Across the continent, negative news events and market dislocations are more frequent than if an investor has just one country to choose from. Being contrarian investors we hope to take advantage of the negative sentiment and value opportunities. That said, the consensus is sometimes correct and buying into bad news can result in substantial losses: unfortunately, great investment opportunities are never obvious. However, in our experience, over the long term it pays to be contrarian and take advantage of negative sentiment.

A company that is currently very out of favour is Egyptian gold mining business, Centamin. Centamin owns the low-cost Sukari mine, which should produce about 400k ounces of gold a year over its 20-year life. What makes Centamin unique is its position on the cost curve. Once the project to double production is complete later this year, the mine should produce gold for a total cost of US$1 000 per ounce.

This compares to AngloGold Ashanti, Gold Fields and Harmony where the costs exceed US$1 600 per ounce. At US$1 300 per ounce, Centamin should generate free cash flow of US$0.06 per share. The share price is US$0.45 and in addition there is net cash of US$0.18 per share on the balance sheet. Unfortunately companies never trade at these sorts of valuations for no reason. A former Egyptian member of parliament challenged the legality of Centamin’s mining rights in the Egyptian Administrative Court and won. Centamin, with the support of the Egyptian Mineral Resources Authority, is appealing the ruling and on our reading has a very strong case as certain crucial evidence was not presented at the original hearing, notably the signed Concession Agreement. There is no certainty in predicting the outcome of a case before an Egyptian court, but looking at the facts and the potential upside versus the downside returns, we think Centamin is an attractive investment opportunity. 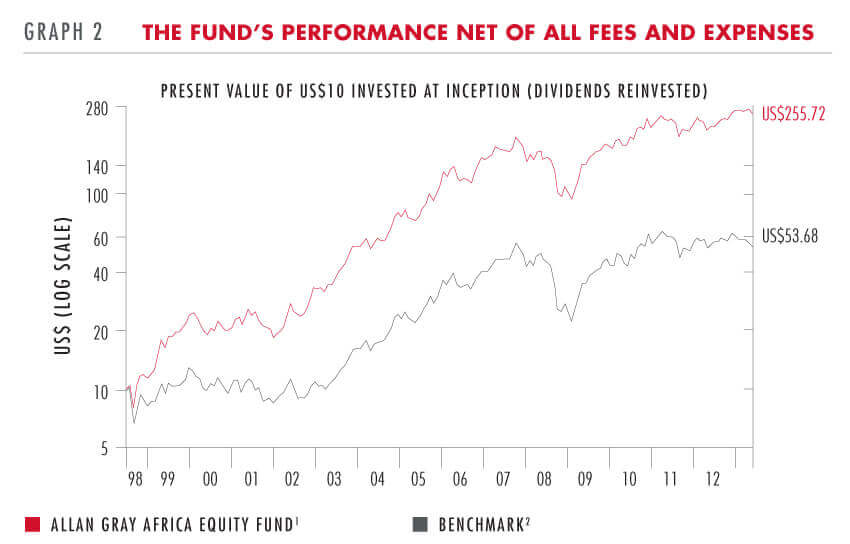 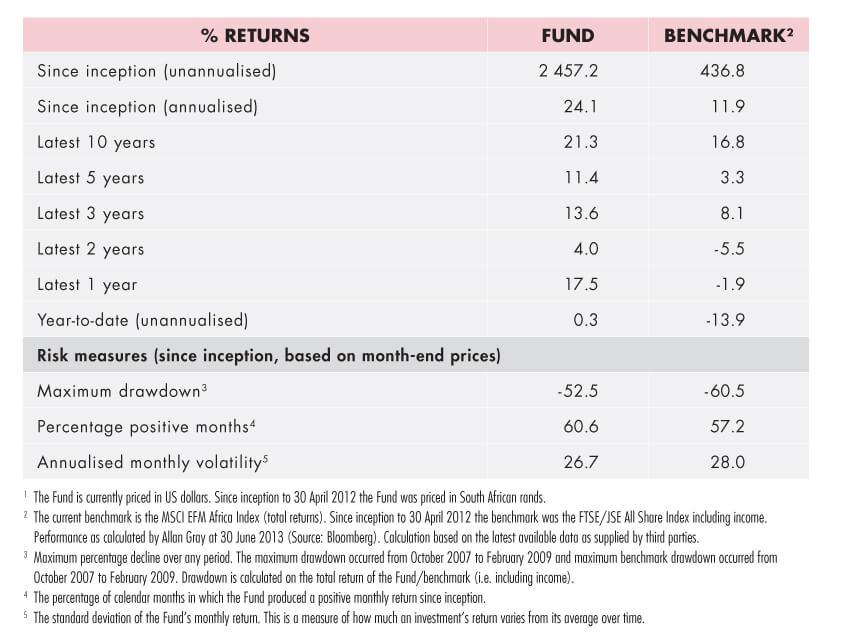 The Allan Gray Africa Equity Fund's performance over the past 15 years resulted in substantial wealth creation for investors (see Graph 2). These returns are very unusual and cannot be expected in future. What investors can expect is that we will continue to do exactly what we did over the past 15 years, which is value companies based on their long-term fundamentals and invest in those companies that are trading at a discount to fair value.

Prior to 2010 the Fund was managed by our offshore partner Orbis, with Allan Gray only advising Orbis on stock selection. In October 2010 we took over the full investment management responsibility of the Fund.

Andrew was employed at Allan Gray from February 2001 to August 2020. He joined as a fixed interest trader and moved to the Investment team as an equity analyst in February 2003. He was appointed as fixed interest portfolio manager in June 2006, began managing a portion of client equity and balanced portfolios in February 2008 and became chief investment officer in March 2016. He also managed African equities. Andrew holds a Bachelor of Science degree in Engineering and a Bachelor of Commerce degree in Accounting, both from the University of Cape Town, and is a CFA® charterholder.