Economists are engaged in an interesting debate about economic growth and what has been described as 'secular stagnation'. The issue has received widespread attention since it was raised by the well-known economist Larry Summers in a speech at an IMF economic conference in September 2013. Sandy McGregor explains why it is pertinent to how governments and monetary authorities should respond to current economic conditions.

What is secular stagnation?

Most of us are conscious of the ebb and flow of the normal business cycle. Our current century commenced with a recession followed by seven years of growth, which in emerging markets was exceptionally robust. The recession of 2008/09 followed, and then the subsequent recovery. However, if we look back over, say, 300 years, such cyclical disturbances have not interrupted a general upward trend in economic activity. The longer-term or secular trend has moved inexorably upwards. As the global economy has grown, so living standards have improved. Ever since the interruption to growth in the Great Depression of the 1930s, a primary agenda of government has been to sustain this process. It is widely assumed that economic growth is the natural order of things, and given correct policies, inevitable.

However, recent economic history has increasingly given grounds to question this optimistic proposition. For example Japan, which for 40 years was one of the world’s fastest-growing economies, has stagnated since 1990, as shown in Graph 1. Europe has proven unable to recover its former momentum since 2008 (See Graph 2). The United States has fared better, but its growth has been disappointing when compared to previous cycles. It is valid to ask whether we are entering a new world where growth is not inevitable and whether the recent history of Japan increasingly will become the norm. The Japanese experience can be described as secular stagnation. 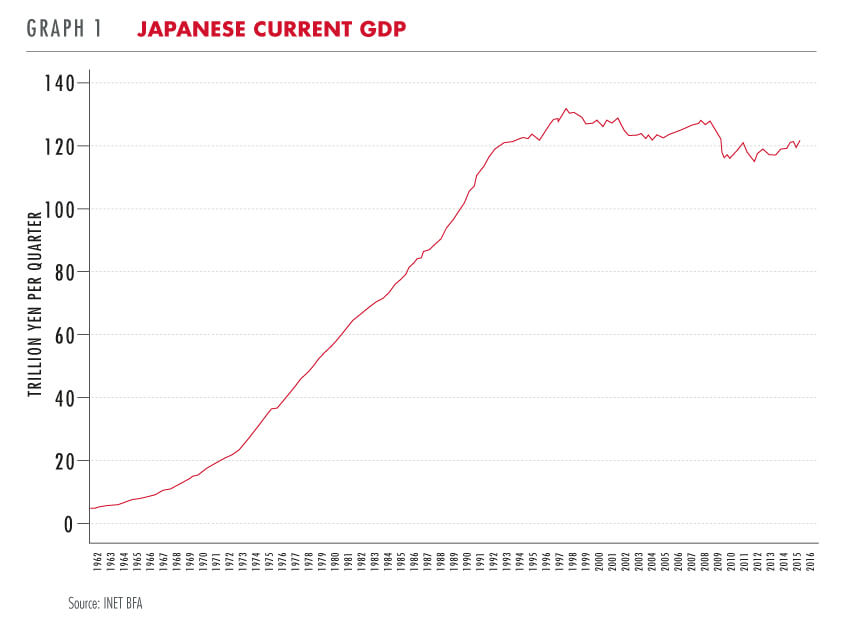 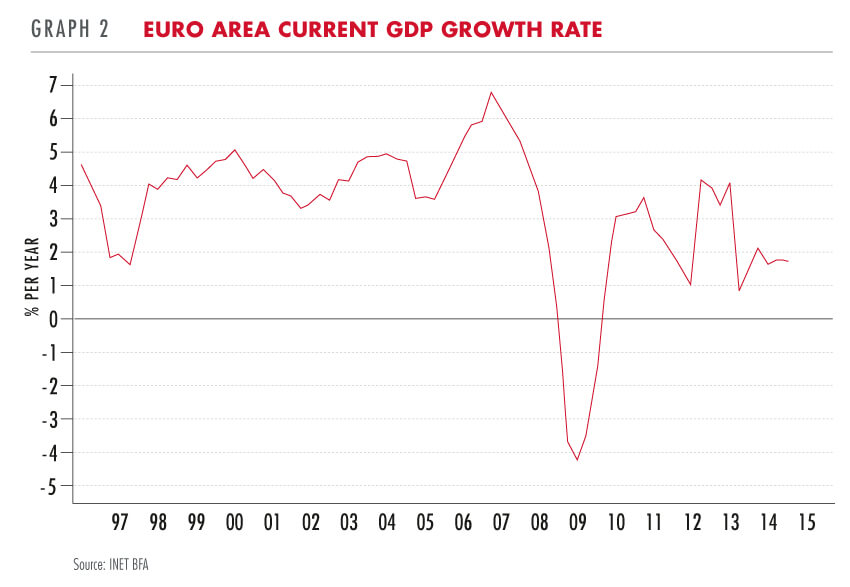 At the heart of the problem are two are formidable obstacles to growth: an ageing and static population and an erosion of the benefits of productivity.

The inexorable consequences of demographics

A growing population can stimulate economic growth. The expansion of the global economy has marched hand in hand with a rising population. However, we are now experiencing something different. In most developed economies population growth has slowed and in many cases, such as Japan or Italy, apart from immigration, has ceased.

Simultaneously longevity has increased dramatically. The developed world is getting older and the burden of supporting an ageing population with pensions and healthcare is growing. Europe’s current problems can be described as the crisis of the welfare state. The burden of social welfare is becoming unaffordable. Some emerging markets are experiencing similar demographic stagnation. Most worrying, China is heading towards a condition similar to Japan. It is often said that the challenge China faces is to get rich before it gets old. An ageing and static or even contracting population constitutes a formidable obstacle to economic growth. This lies at the heart of the problems of Europe and Japan.

It is not simply the cost of supporting an ageing population which retards growth. Transforming any society requires the enthusiasm of youth. There are few things more powerful than a generation on the make. Those who fought in the Second World War and then went on to create a prosperous suburban society have been called America’s greatest generation. The reconstruction of Europe and Japan after 1945 was the achievement of young people determined to rebuild the world which had been destroyed.

Modern China has been created by the children of those who participated in the Great Cultural Revolution of 1966, with all its disastrous consequences. Strong economic growth does not simply happen. It requires the determination of a dynamic generation of younger people. The dilemma facing so many countries is that they are getting old and increasingly lack the vitality of youth.

WE ARE ENTERING A NEW WORLD WHERE GROWTH IS NOT INEVITABLE

Once a society with a static population has achieved an acceptable average living standard there is no need for further growth. Ultimately the political system in many developed countries will have to accept this reality and adjust accordingly.

Economic growth can be described as making things cheaper. Productivity gains are essential if living standards are to improve. The prosperity created in the post-World War Two boom between 1945 and 1973 was the consequence of a massive reduction in manufacturing costs, driven by increasing economies of scale. The benefits of increased productivity were redistributed through the economy in the form of higher wages, which in turn boosted consumption and growth. Unfortunately, by the end of the 1960s this virtuous cycle of rising productivity and real wages had run its course, as increasing scale no longer generated sufficient gains in efficiency. The world then sank into inflationary stagnation.

A second productivity revolution commenced in the 1980s driven by globalisation and new technology. The world has benefited from a productivity windfall from globalisation. Globalisation has clearly benefited emerging markets, most notably China. There has been a migration of the production of goods and services to countries with a lower cost base. In particular the sudden emergence of China as the second-largest economy has massively increased global trade flows. However, the easy winnings are probably now behind us, and the rate of expansion of world trade is slowing. The positive impact of globalisation is no longer what it used to be.

New technologies, in particular computerisation and artificial intelligence, have dramatically reduced production costs in many industries. Unfortunately, however, this new wave of productivity gains has not resulted in a productivity dividend in the form of higher wages. Part of the problem is that new technologies tend to eliminate the need for labour, requiring only a small, highly paid, technical elite to operate. There are not enough new skilled jobs being created to replace those being destroyed. The virtuous circle of productivity increasing wages, and therefore demand, is broken. The creative spirit seems alive and well. There is a constant flow of new products, but there remains the vexing problem of how to harness new technologies to create widespread prosperity. New products can change spending patterns without necessarily increasing the aggregate amount of expenditure.

The illusion of the recent past

There is a tendency prevalent among governments and investors to look back on the period between 2002 and 2008 as the normal to which we should return. It is important to understand that this was an unusual period of above-average growth generated by the emergence of China and by excessive credit. We now live in a world where China’s growth is slowing, and many parts of the global economy are burdened by excessive debt. The proponents of the idea of secular stagnation argue that slower growth will be the norm, the inevitable consequence of demographics and changes in the way economies operate.

Central banks have not bought into this idea. The financial system has been flooded with newly created money in the hope that this will stimulate activity and bring back some halcyon era. This programme has failed because it can do nothing about the real determinants of growth, such as demographics and productivity. Low interest rates will not change the inevitable consequences of demographics. Policies aimed at promoting inflation are a total contradiction of the proposition that growth requires productivity gains.

It is no coincidence that high interest rates in the 1980s generated growth by eliminating an inefficient allocation of resources, whereas the experiment of zero rates has promoted inefficiency and has failed to generate robust growth. Since 2012 Japan has embarked on the most aggressive campaign of monetary easing ever attempted - with remarkably little effect on its real economy.

Larry Summers has argued that the solution to secular stagnation lies in investment in infrastructure. This is more likely to have a positive outcome than what monetary policy has achieved in recent years. However, there remains the question of how this would be financed. Adding to an already-excessive level of debt is likely to inhibit, rather than promote, growth.

It is probable that governments and central banks can do little to combat secular stagnation. The best they can do is create an environment in which excessive indebtedness is reduced and where human ingenuity can thrive, and hope for the best.

Secular stagnation is already a challenge facing developed countries. In the not too distant future middle income economies, such as China, will face similar problems. Perpetually slower growth will require totally new responses from governments and private sector business. Investors must be cognisant of this new reality. It is not that growth will necessarily cease, although in some countries this will be the case. However, we shall have to get used to the idea that what we used to think of as normal will no longer be the case. As popular wisdom has it: the future is no longer what it used to be.

While this is an issue for countries well advanced in the development cycle, large parts of the world, including Africa and India, have a long way to go before they face these problems. Increasingly it will be these countries which become the focus of global growth. However, ultimately even they will also reach a limit to their growth.

The debate on secular stagnation has particular relevance for South Africa because we are an unusual case of being a developing economy which is growing very slowly. While, theoretically, we have favourable demographics, in practice our dysfunctional education system prevents us from reaping the benefits which should be enjoyed by a country with a very young population. We are witnessing the cost of an inflexible economy and legislation which imposes huge burdens on business. Unless South Africa can restore its economic competitiveness it too faces a future of secular stagnation.