On the commodity boom and other South African fables (and foibles)

Just as the economic destruction from the COVID-19 pandemic rose to crisis levels, strong commodity export prices swept in to alleviate South Africa’s fiscal woes. To pin our hopes for the entire domestic recovery on a cyclical pricing story may prove foolish, especially with a spluttering local production base and a host of domestic challenges. With inflation fuelling import and export account imbalances, it is critical for both us and our African continent peers to tighten our belts and prepare for what may be tough times ahead. Thalia Petousis discusses below, and in our latest podcast.

The past 40 years of global order and NATO-enabled peacetime trade have allowed intercontinental supply chains to flourish, facilitating worldwide growth and poverty reduction. While the US-China trade war, Brexit, and even the COVID-19 pandemic sowed the seeds of doubt in such trade alliances, the Russia-Ukraine war has arguably tipped the scales even further in favour of both domestic protectionism and deglobalisation. Both of these forces are surely the enemy of low prices, and are wreaking havoc in already-disrupted supply chains.

As Sandy McGregor discusses in his piece, global inflation has ventured into an inferno – and taken commodity prices along for the bumpy ride. In the first half of this year, the prices of oil, gas, wheat and a basket of platinum group metals (PGMs) had each risen in excess of 60% at their respective peaks. For this, the Russia-Ukraine war alone cannot be blamed. While the war threatened to take two giants of the exporting industry out of the market, the fire of inflation had already been ignited in the last two years – in part by excessive US monetary and fiscal stimuli.

The commodity story has meant that South Africa’s trade balance (our exported goods and services minus our imports) has soared. This allowed our current account to reach a record high surplus of 5% of GDP in 2021, as shown in Graph 1. Strong commodity prices have also provided some fiscal relief to the SA government via a bumper season of corporate income tax collections from SA miners and exporters. This additional revenue has resulted in a tightening of our fiscal deficit (government’s excess spending above revenue), as seen in the same graph. 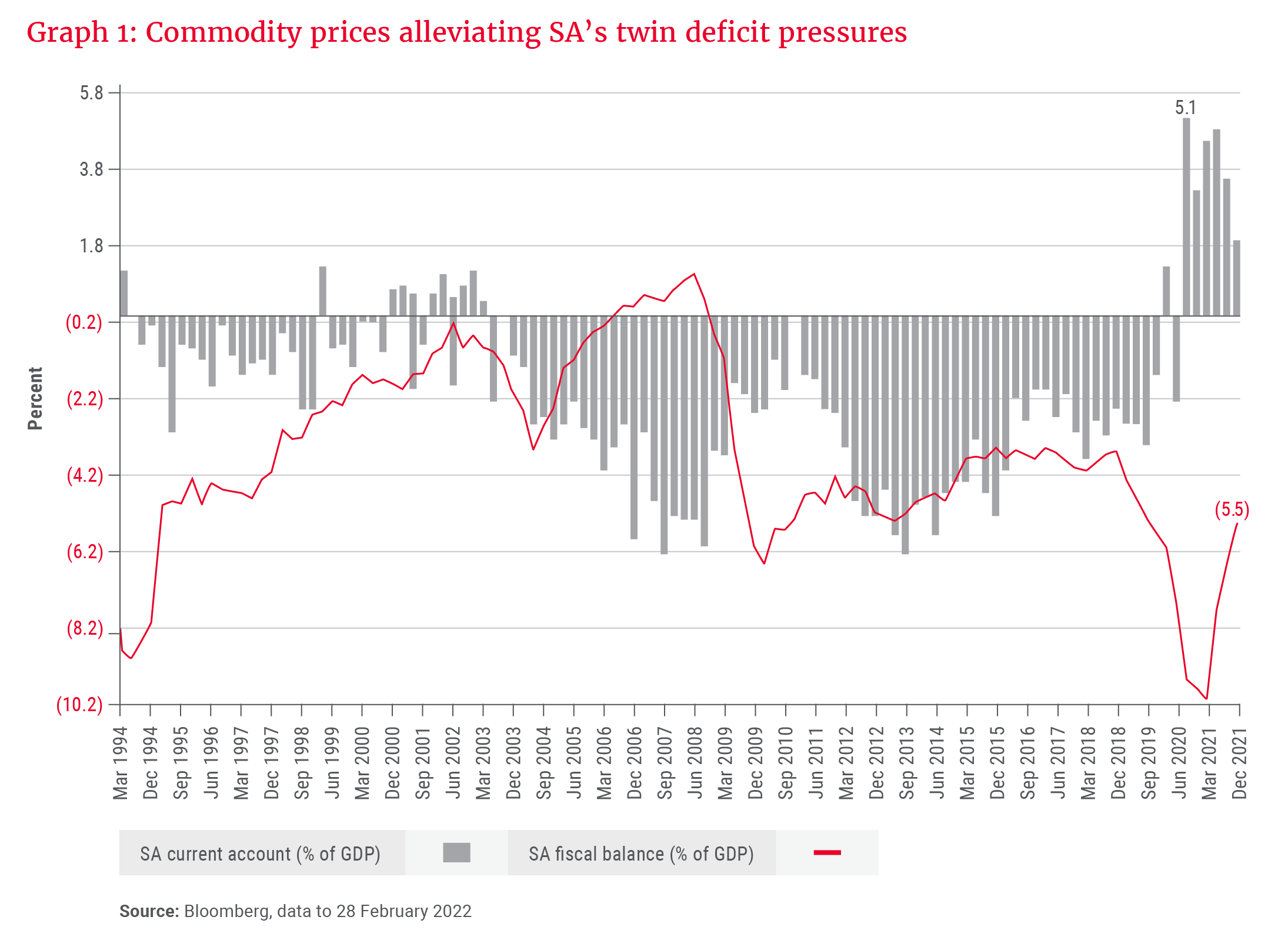 Within the broader export basket, Graph 2 unpacks the rand value of SA’s key commodity exports of rhodium, iron ore, gold, palladium, coal, platinum, manganese and diamonds in 2021, which registered an 80% increase from 2019. Business is booming – or is it? 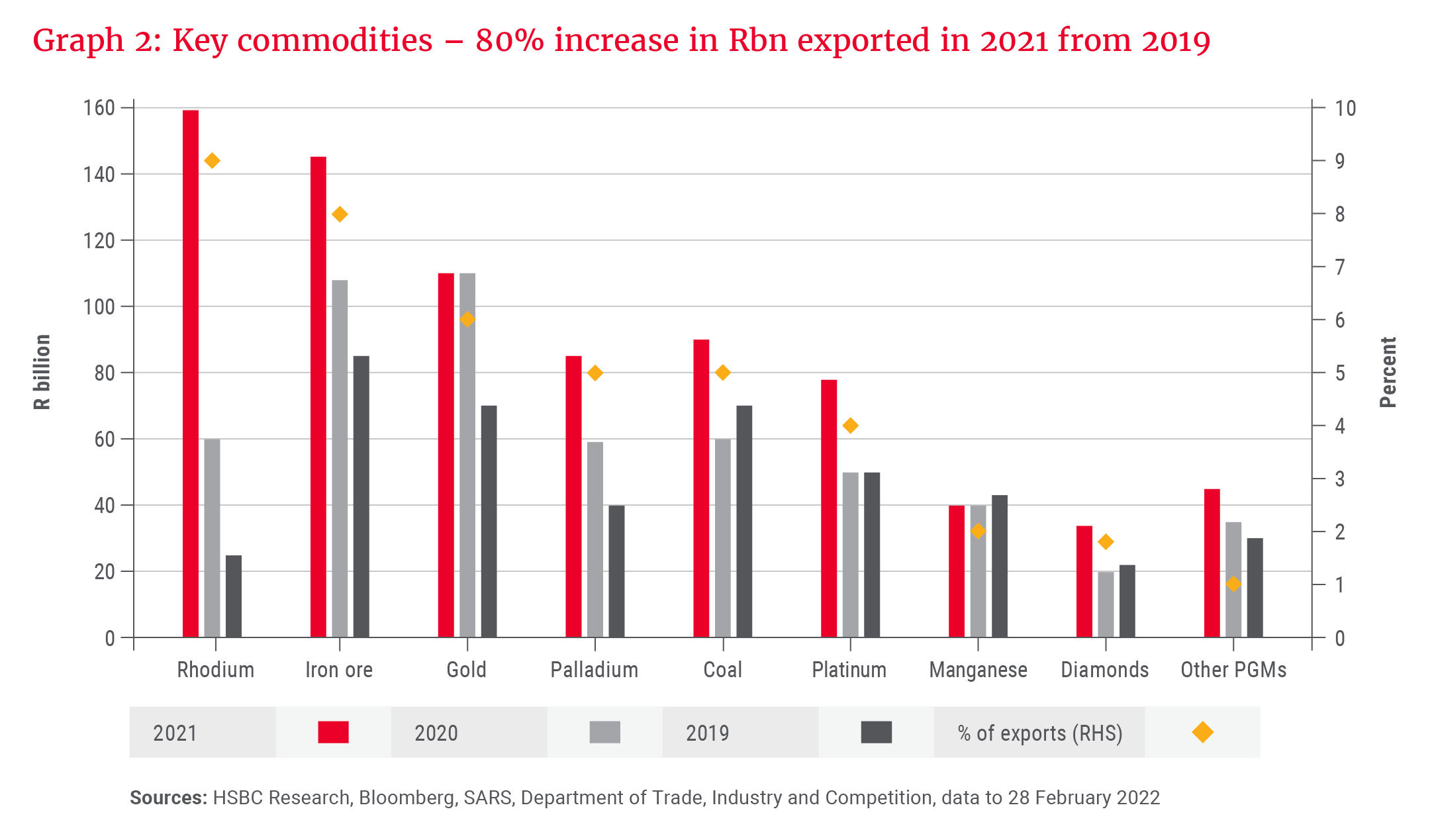 The fable and the foibles

The rand value of exports tells an excellent story, but it neatly banishes another narrative to the footnotes – the story we get when we strip out prices and only look at production and export volumes.

Loadshedding, strikes, and weak port and rail infrastructures are weighing on mining production …

Graph 3 contains mining production output rebased to 2015 levels. It is looking far from healthy, recording declines in major categories over the last several years. Loadshedding, strikes, and weak port and rail infrastructure are weighing on mining production and raising the barriers to get contracted volumes offshore. Transnet’s rail network has been crippled by copper cable theft and locomotive failures. The theft of metal and even electricity pylons is well documented by Eskom and Transnet, given the rising global demand for copper scrap and steel. In short, SA cannot take advantage of the commodity boom to the extent that we should be doing so. 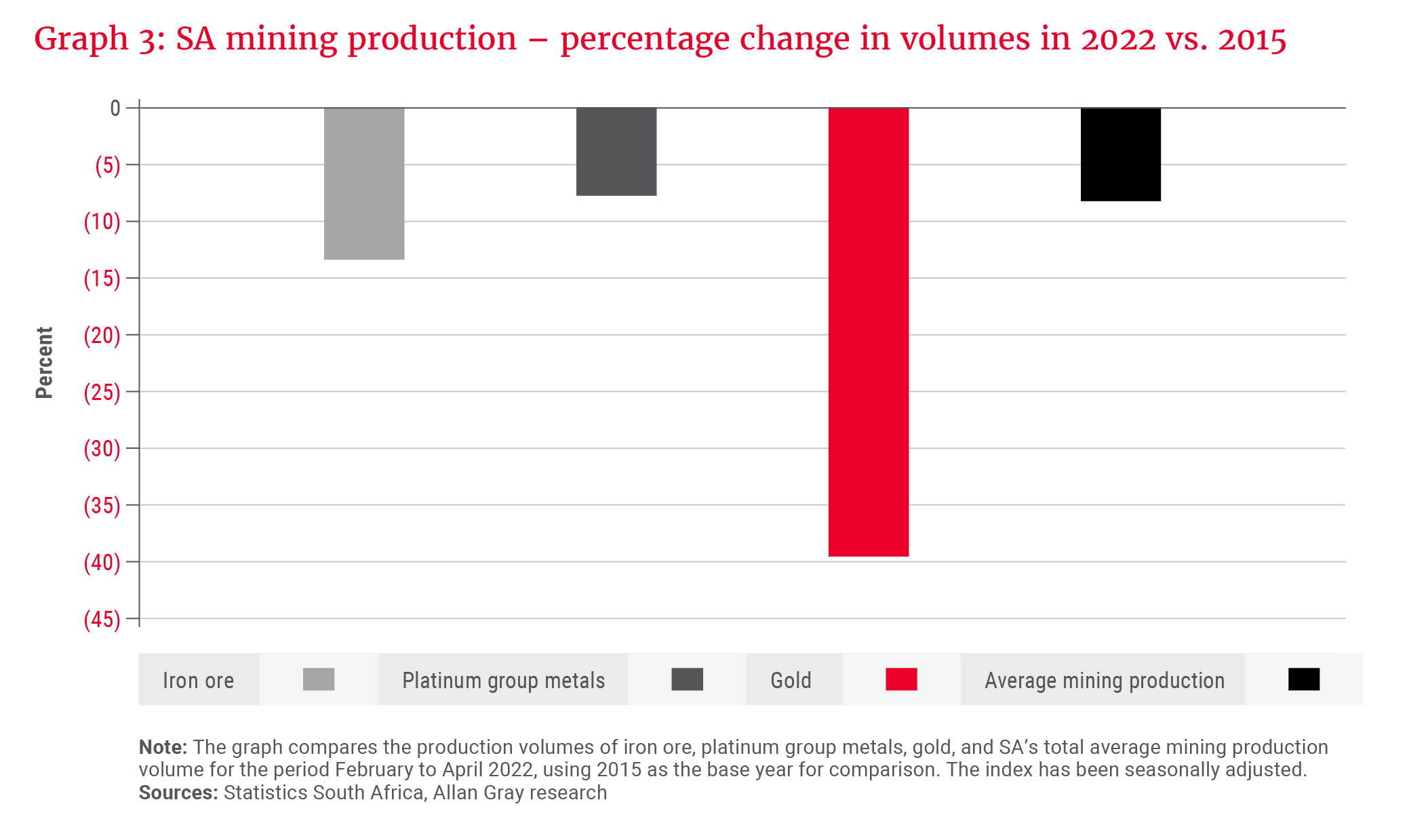 Where to from here in our commodities saga? Will the SA current account surplus remain robust, providing more near-term relief?

SA’s largest imports are mineral products (23% of imports – mainly oil) and machinery (20% of imports), followed by chemicals (12% of imports – mainly pharmaceuticals, raw chemicals and fertilisers). Thus far in 2022, an escalation in the price of imported goods is seeing the positive trade balance beginning to erode. The rising cost of oil and disappointing mining production volumes have narrowed the current account balance from a record 5.1% to a slightly less robust 2.2% of GDP. This is not excellent news for the SA fiscus, which is under enormous pressure due to a struggling municipal model, the growing social requirements for poverty and relief grants, and a structural shortage of energy.

Where the story may unravel

A far more dire picture is beginning to emerge across the rest of the African continent, most notably for countries with large oil and food-heavy import bills. Many African countries are surprisingly ill-equipped to benefit from the commodities boom, and some experience heavy fiscal bleed via fuel and food subsidies to alleviate the burden on the consumer. The result has been that some on the continent are experiencing severe distortions in their trade balances.

Nigeria is a country which historically benefited from rising oil prices, but it is producing less than its Organization of the Petroleum Exporting Countries (OPEC) oil quota. Oil production has almost halved from 2.5 million barrels per day 10 years ago to 1.3 million barrels per day in 2021. Not only that, but fuel subsidies have risen to around US$4bn a year (0.9% of GDP, or a staggering one-third of all fiscal revenue!). Lack of investment due to naira liquidity constraints, conflict with host communities, vandalism, and delays in enacting proper regulations have resulted in fuel shortages, hurting the economy and consumer sentiment. As such, Nigeria’s foreign exchange reserves have fallen despite the oil rally this year.

While rising gas prices benefit Egypt’s (gas) exports, as a major importer of wheat and grain (subsidised by the fiscus) and alongside their problematic debt burden, they have had to rely on Saudi Arabian aid this year. “Bread riots" following subsidy cuts and increased food prices led to violent clashes in Egypt in 1977, 2011 (the Arab Spring) and 2017.

In Kenya, foreign exchange pressures and a US dollar and fuel shortage have begun to emerge. This is not only due to large oil imports, but a lagging supply of US dollars into the economy via key exports of coffee and flowers. Global trade disruption breeds imbalances in prices.

Decades of easy offshore monetary policy have also enabled certain African borrowers to binge on oversubscribed Eurobond issuances, pushing the weak to the brink of debt distress. This is problematic as the reversal in global trade flows – in part due to rising protectionism and supply chain disruption at ports – is also being mirrored in the financial markets as a reversal in global capital flows. Rampant developed market inflation, quantitative tightening and rising interest rates will hamper the ability of African borrowers to refinance their debt.

Fiscal sustainability rests on implementing growth-enhancing reforms and allocating capital to its most productive economic use.

Ultimately, debt stabilisation rests on sticking to the spending plan and reducing wasteful expenditure. Fiscal sustainability rests on implementing growth-enhancing reforms and allocating capital to its most productive economic use.

For South Africa and the rest of the continent, the commodities boom alone cannot work wonders. The heroes in this story can only emerge when they strive to achieve sustainable growth beyond a short-term pricing cycle.

Thalia joined Allan Gray as a fixed interest trader in 2015. She was appointed as a portfolio manager in 2019 and currently manages the money market portfolio as well as a portion of the balanced fixed interest portfolios. Thalia holds a Master of Commerce degree in Mathematical Statistics from the University of Cape Town and is a CFA® charterholder.

In the past 12 months , global inflation has surged. Sandy McGregor discusses the increasingly turbulent response of the financial markets.

LISTEN : Podcast: Can optimism rise from the inflationary ashes?

WATCH : Q&A with Allan Gray and Orbis: Positioning our portfolios for an inflationary environment

With rising global inflation and the possibility of a recession on the cards, investors are tasked with protecting their capital and looking for opportunitie...