The Stable Fund at 20

With an allocation to assets such as equities being key to long-term growth, even for more conservative investors, we believe the Allan Gray Stable Fund remains as relevant now as it has been over the last 20 years. Sean Munsie discusses why we are excited about the Fund’s future return prospects.

The Allan Gray Stable Fund (the Fund) turned 20 in the last quarter. When the Fund was launched in July 2000, we felt there was a need for a portfolio that was suitable for more risk-averse investors who required a high level of capital stability, but wanted to achieve a return higher than inflation. At the time, cautious investors favoured bonds and cash over equities, and with good reason. In the early 2000s, equities had meaningfully underperformed cash over the prior decade with higher volatility.

This outcome was counter to that of longer-term asset class returns, as shown in Graph 1. Adjusting for inflation, equities have returned 9.1% per year versus bonds at 2.3% and cash at 1.2% over the last century. The Stable Fund introduced a novel portfolio construction, which was a large weighting towards cash and bonds for downside protection, together with a modest allocation to equities to capture the equity risk premium and generate real returns. 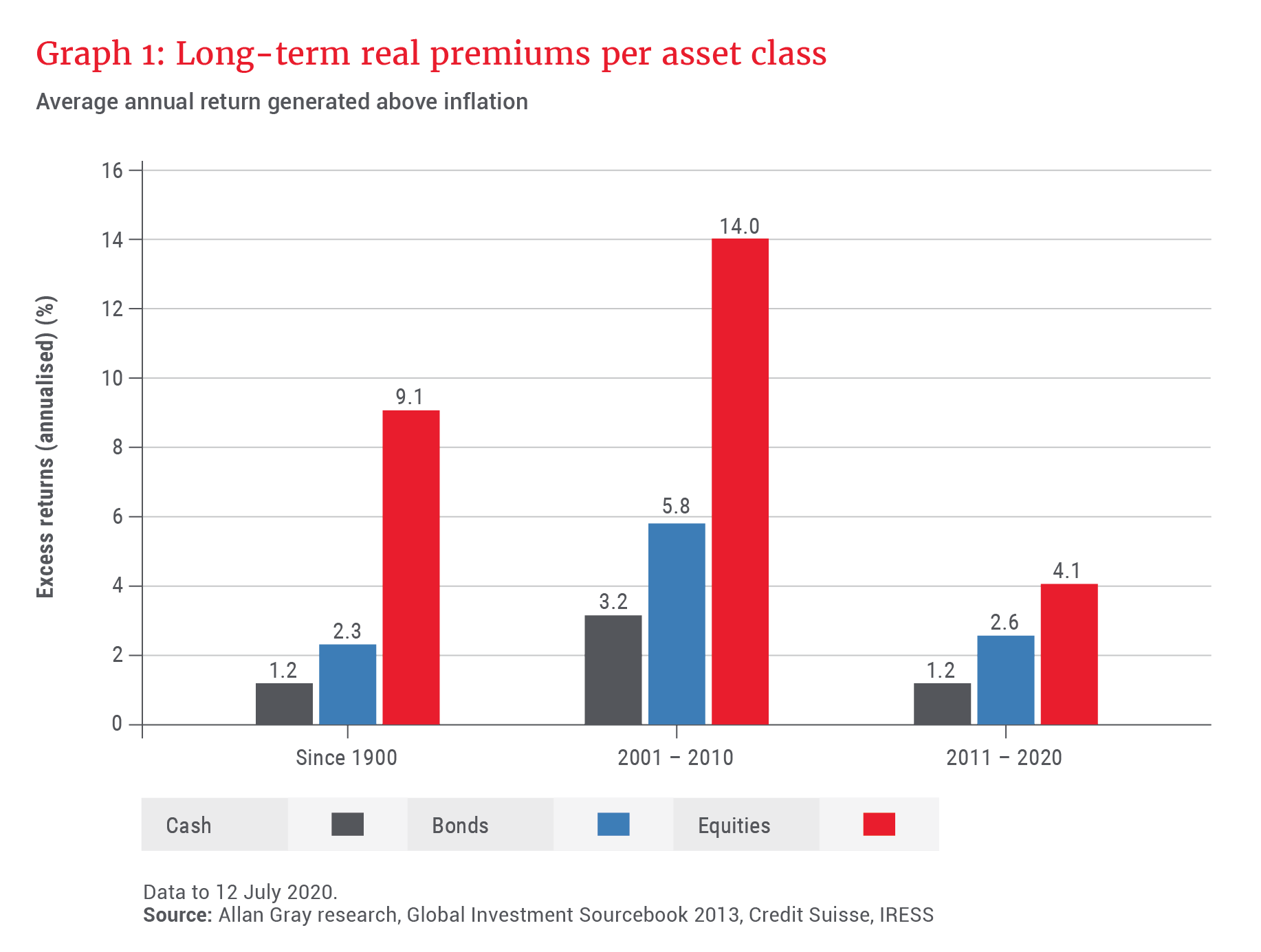 Fixed income is managed on an active but conservative basis, while share selection is based on our bottom-up stockpicking process. Equity weight is capped at 40% of Fund, with the allocation varying based on the attractiveness of shares at any given point. Table 1 shows that the real return on such a fund using historical returns (equity return is reset downwards to a more sustainable 6%) would be approximately 3%. 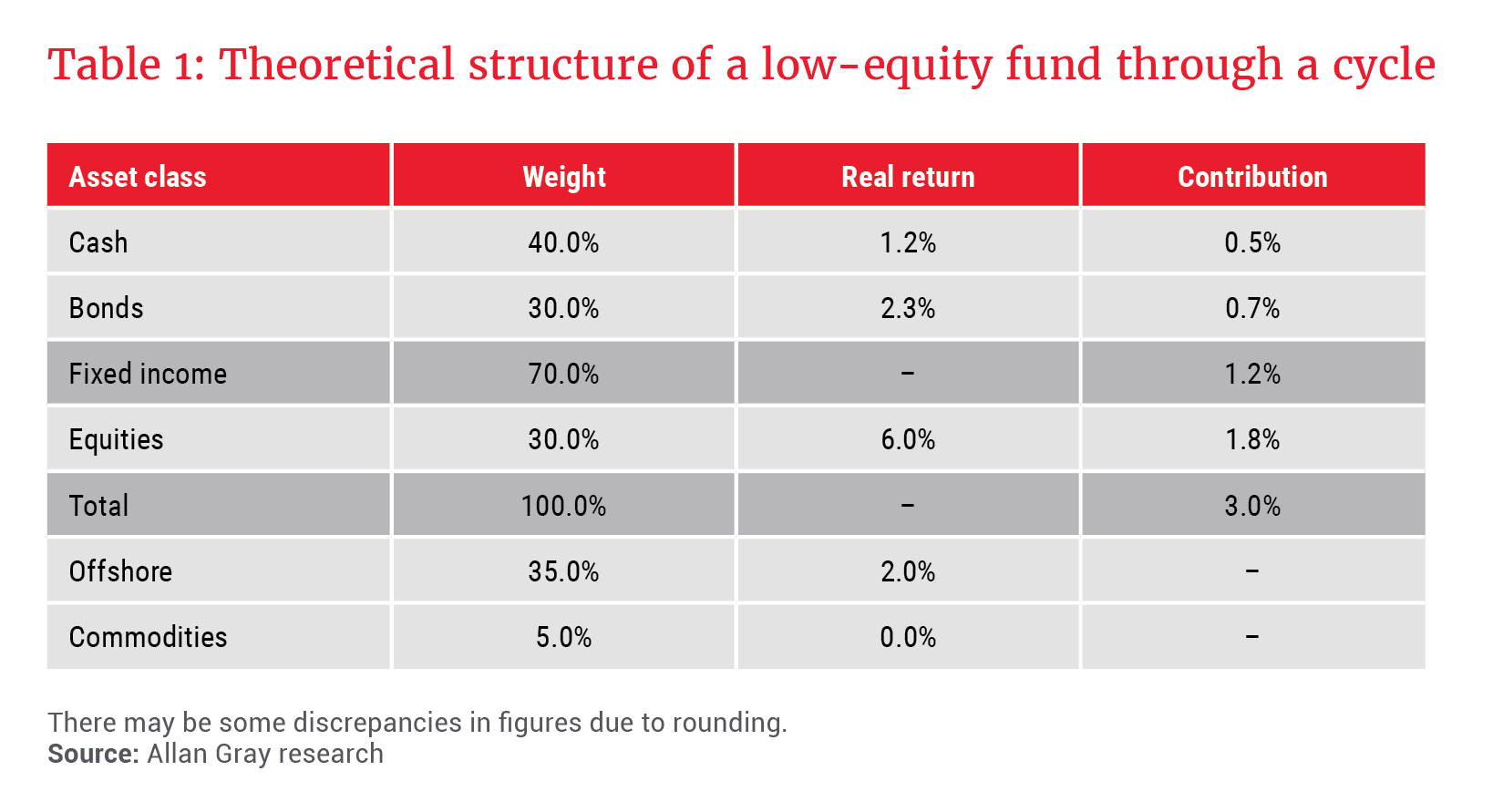 Viewed in an alternate manner, Graph 2 shows the theoretical 3% long-term real return of a passively constructed low-equity fund equally weighted in cash, bonds and equities. The rolling 10-year real return moves higher when assets are cheap and rerate to higher levels. These periods are typically followed by lower returns as asset prices revert to fair value or lower. 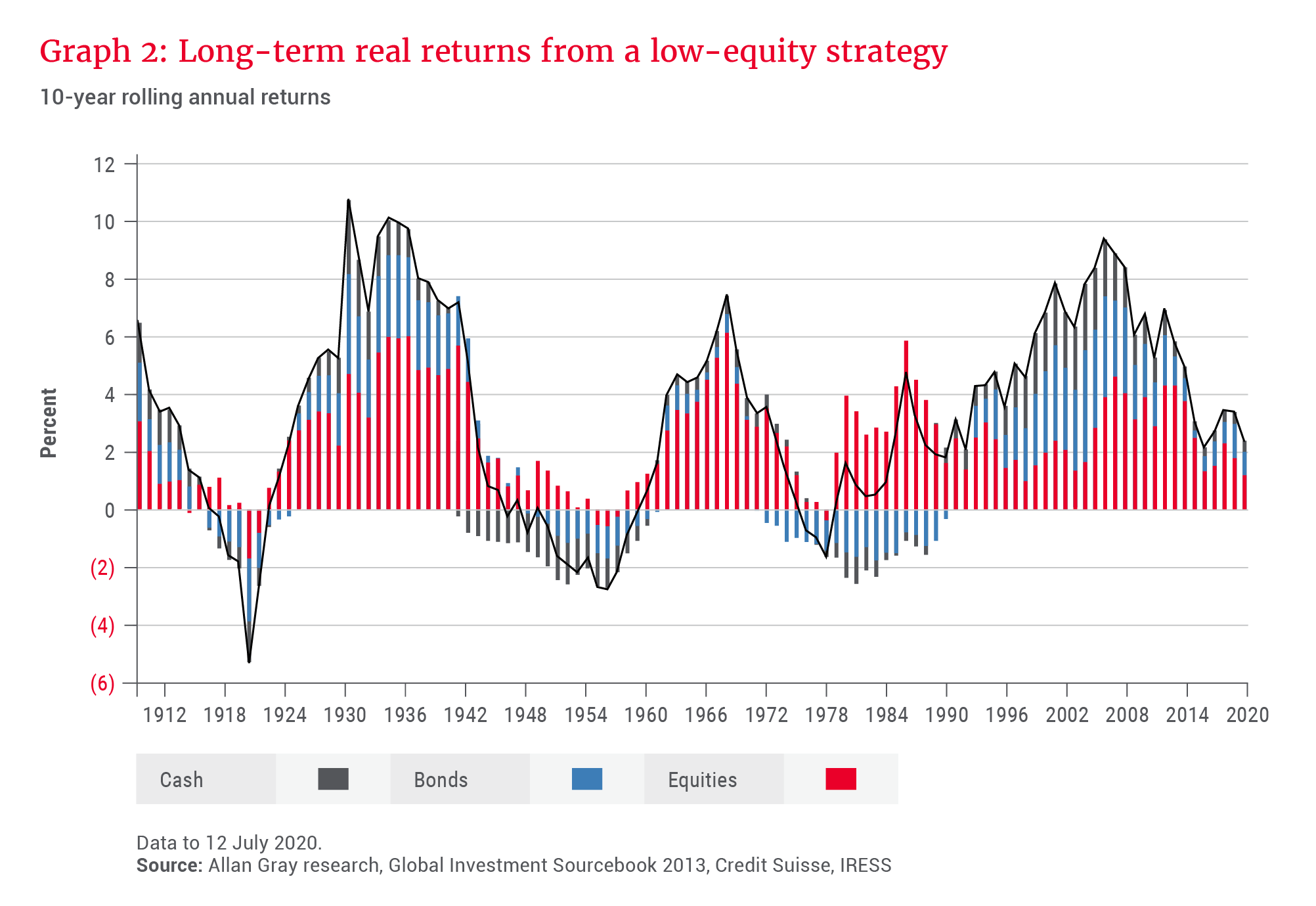 Other takeaways include that 1) 10-year equity real returns are rarely negative, and 2) fixed income is the asset class that produces most of the negative real returns, coinciding with periods of increasing inflation. It is therefore important to balance the protection provided by the majority of assets being invested in cash and bonds with an appropriate amount invested in equities to generate potentially higher real returns.

The above talks to the theoretical returns that can be achieved using the asset class building blocks at our disposal to construct the Fund, and informs the Fund objective of cash + 2% (alternatively viewed as a 3% real return). Meeting and exceeding this target depends on successful active asset allocation and our ability to generate outperformance on both the equity and fixed-income selections.

Over time, we have expanded the potential asset classes to include exposure to offshore assets via Orbis funds, commodities and African assets, providing more tools to achieve the Fund objective. The return on these components is derived from both the underlying asset performance denominated in foreign currencies and fluctuations in the rand.

In hindsight, the launch of the Fund was well timed, as South African equities were depressed in the early 2000s and enjoyed a subsequent multi-year bull market that produced double-digit real returns (as shown in Graph 1). This resulted in much higher returns for the Fund in the years before the global financial crisis than we would expect through the cycle.

If we look at the history of the assets making up the portfolio, and which types of market conditions provide tailwinds for the Fund, we find that the ideal scenario would be a combination of high real short-term interest rates and cheap equities. In this setting, the Fund would be weighted to cash over bonds, limiting credit and duration risk, together with a higher allocation to equities.

The counter is also true, and there have been periods when investors have had to be patient when faced with low or negative real interest rates and expensive equities. It is in these periods when active asset allocation and investment discipline add value.

The more recent environment has fallen somewhere between these two scenarios, with high real interest rates accompanied by disappointing equity returns. Graph 3 shows the annual excess return of equities over cash since 2010 which, on average, has been well below the long-run level. Unfortunately, this has been compounded by poor stock selection, both locally and offshore, over the last three years. 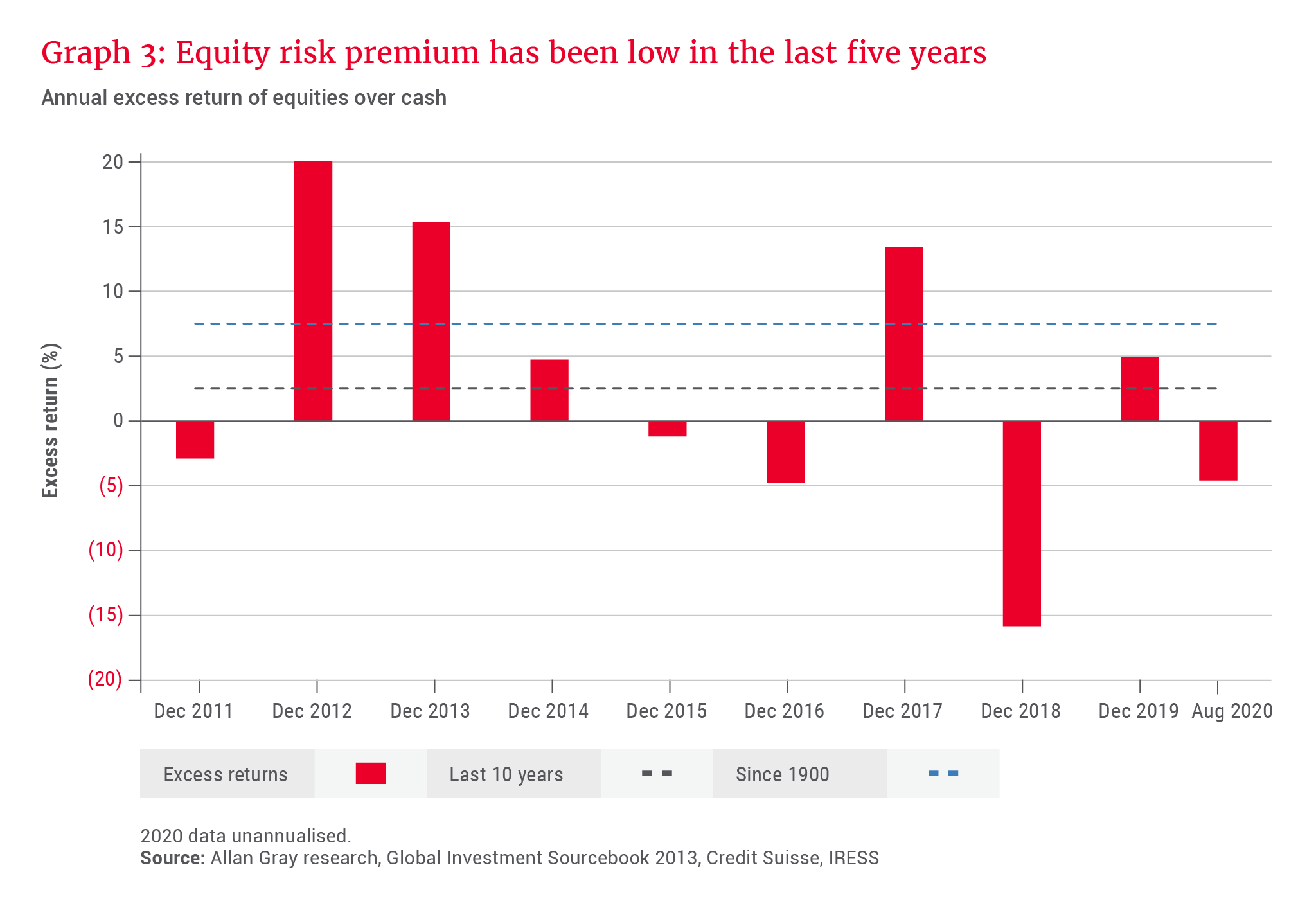 Financial markets saw a rapid broad-based sell-off in the first quarter of this year as investors, faced with the uncertainty brought by COVID-19, sought the safety of cash. The peak-to-trough drawdown in the quarter for the FTSE/JSE All Share Index (ALSI) was 35%.

The local bond market, historically a relative safe haven, lost 10% in March. Rand weakness helped offset the decline in the Fund’s offshore assets. The resultant Fund return for the month was -9.0% which, for context, was well in excess of the previous largest drawdown of -3.3% in February 2009, during the global financial crisis. At the end of March this year, the Fund disappointingly produced its first negative two-year rolling return of -0.2% p.a.

Our view at the beginning of the year was that local equities were reasonably priced, which informed the limited hedged equity position in the Fund. While the damage inflicted by the lockdown has had a significant impact on both the government's finances as well as the near-term performance of domestically focused companies, many local assets were trading at very depressed levels in March and April and we used the opportunity to purchase both nominal and inflation-linked bonds and selected equities. Asset prices subsequently rebounded aggressively, and the Fund has returned 9.9% since March versus the benchmark of 2.5%. This has resulted in the two-year return increasing to 1.4% p.a. at the end of September.

Although this is an extreme example, it does speak to the risk of investors increasing their allocation to cash when sentiment is at its most negative.

We continue to believe that real assets, such as equities, have a place … in conservative portfolios

The high real short-term interest rates in recent years gave South African investors the opportunity to earn returns in excess of that offered by bonds and equities, while taking on very little risk. The aggressive interest rate cuts by the South African Reserve Bank in response to the economic contraction mean this opportunity may be coming to an end. Yields on money market funds should trend closer to the 3.5% repo rate as existing investments mature. Relative to the most recent 3.2% inflation print, this leaves a real return closer to the long-term history. If inflation rises in time, which we view as likely, this would further erode cash real returns.

We continue to believe that real assets, such as equities, have a place – alongside fixed income – in conservative portfolios, as evidenced by history. While the current valuations of local assets are not as low as they were in the early 2000s, we think it is important to consider whether investors find themselves at a similar juncture today.

Currently, the Fund has a higher weighting to local bonds versus its history, owing to the attractiveness of relative returns on offer compared to cash. The net equity weight is broadly similar, with approximately half of the local equity component invested in diversified global companies, with minimal exposure to South Africa. The remainder of the local equity sits in domestically focused companies, some of which we think are unusually cheap. The Fund’s offshore asset exposure, at 36%, is in line with the maximum limit allowed by the retirement fund regulations.

we remain excited about the prospects, and believe that the initial premise and the structure of the Stable Fund remain as relevant now as they have been over the last 20 years

So why should risk-averse investors, or those requiring a portfolio from which to drawdown income, choose the Fund?

We believe for a combination of factors: Firstly, the ability to invest across asset classes, including equities, within predetermined limits, provides us with the necessary flexibility to both generate real returns and focus on capital preservation, which is particularly relevant in periods where any one asset class generates negative real returns, as fixed income has done over many historic periods. Secondly, the way we manage fixed income in the Fund focuses on generating both income and capital gains. And finally, our active asset allocation and investment outperformance have added to returns and reduced volatility over the past two decades.

As such, we remain excited about the prospects, and believe that the initial premise and the structure of the Fund remain as relevant now as they have been over the last 20 years.

Sean joined Allan Gray as an equity analyst in 2013 after working for various investment banks in the United Kingdom. He was appointed as a portfolio manager in 2020 and manages a portion of the stable portfolios. He is also the manager of the optimal portfolios. Sean holds a Bachelor of Commerce (Honours) degree in Accounting from Stellenbosch University. He is a qualified Chartered Accountant and has passed all three levels of the CFA® examinations.

LISTEN : Market update: Weighing up opportunity and risk in the face of volatility

While the local market has been strong, South African assets still look cheap overall compared to many of their global counterparts. There is opportunity in...

Our take on the “shrinking” JSE

Several high-profile delistings over the recent past have spurred market commentators to discuss the JSE’s “slow death” in the context of a struggling local...

How we approach fixed interest

The FTSE/JSE All Share Index (ALSI) is now significantly higher than it was before the pandemic – 21% up from the start of 2020. Is this a sign that it is ti...