Since its inception in 1998, the Allan Gray Equity Fund (the Fund) has returned 26% per year (after fees), while the benchmark FTSE/JSE All Share Index (ALSI) has returned 18.5% per year. At around R40bn in assets, the Fund is the largest equity fund and the 5th largest unit trust in South Africa. We have recently proposed some changes to the Fund that aim to increase long-term returns by adding offshore investment opportunities and by reducing fees. If you were invested in the Fund on 21 November 2014 you would have received a ballot pack explaining these changes and asking you to vote for or against them. Richard Carter explains why we believe the changes are good for the Fund and its investors.

Why change a successful fund?

The history of the Fund has coincided with a 16-year period of fantastic returns on the JSE. As Ian Liddle explains in the December factsheet commentary, after such a strong period, we expect the South African market to deliver lower future returns. The Fund is currently limited to invest only in shares available on the JSE. With the local market representing a tiny sliver of the global share universe, allowing the Fund to invest offshore would give it access to a broader range of global shares. This would provide our portfolio managers with greater investment flexibility and a bigger universe of investment opportunities, which we believe will allow them to do a better job for clients.

If our proposal is accepted, our portfolio managers will not suddenly devote their time to global stock picking. Instead they will actively allocate a percentage to be invested offshore based on their view of the attractiveness of global shares compared with JSE shares. This allocation will then be invested in funds managed by our offshore partner Orbis, which also manages the offshore assets of our Balanced and Stable Funds. Allan Gray will manage the portion allocated to African shares.

We caution investors about forming a view based on the rear-view mirror. An historical analysis of adding offshore investments to the Fund shows little benefit. In fact, holding a strategic allocation to offshore since inception would have detracted from the Fund's returns. This is because the JSE has come out on top in 11 out of the last 16 years and outperformed global markets by 8.5% per year over this period, as shown in Graph 1. From this point, our strong view is that there are better prospects for future returns from global shares than we find from those listed on the JSE.

In addition to an offshore component, we have proposed to change the Fund's mandate to allow it to invest in listed derivative instruments, subject to regulatory limits. Importantly, we do not intend to make extensive use of derivatives in the Fund, but there will be some opportunities to reduce risk, for example in currency exposure on the offshore portion, or to improve returns on the cash portion of the Fund. Investing in derivatives will not change the Fund's underlying investment approach.

The current ALSI benchmark, which consists of only locally listed shares, will no longer be appropriate if the Fund can also invest offshore. We are thus proposing to change the Fund's benchmark to a sector average benchmark, based on the market value-weighted average return of the South African - Equity - General sector, excluding Allan Gray funds. Many funds in the sector already invest offshore and we expect that number to increase in the future. The benefit of the proposed benchmark is that its offshore component will change automatically over time as the views and offshore allocations of competing managers change. We believe this is better than a composite benchmark, for example part ALSI part MSCI World Index, where it is difficult to determine the percentage split to apply as the weightings to offshore and local change over time.

To outperform the new benchmark we will have to generate better returns after fees for investors than would be available to them from our competitors. We feel that this is fair, especially given that the market value weighting places a greater emphasis on the bigger funds in the sector, which tend to have grown through consistently good returns and resulting client support.

The new benchmark is consistent with the sector average benchmark of our Balanced Fund and will be calculated independently in the same way by international independent research firm Morningstar.

A lower fee for benchmark performance

On top of the other changes, we have proposed a new fee, aiming to reduce the cost of investing in the Fund and to better align the fees you pay with the performance you experience. Table 1 compares the current and proposed fees. We believe that performance fees are a good thing: they can ensure that investors only pay above-average fees when they experience above-average performance and therefore align the interests of investors with those of the fund manager. While the Fund's current fee has embodied this principle, the two year rolling period fee design and the wide fee range of 0-3% means that there can be a meaningful timing mismatch for investors joining or leaving the Fund. If you joined the Fund after a period of outperformance you would have paid for it over the next two years even if you did not experience the same level of outperformance over that two-year period.

We are proposing 1) a fee reduction for benchmark performance from 1.5% to 1% (excl. VAT) and 2) to change the performance fee calculation from over a two-year period to a daily fee. This will improve the timing of the fee, so you will never pay for outperformance you haven't experienced. As is currently the case, the fee can reduce to zero when the Fund underperforms the benchmark.

A high watermark principle applies: If the fee would have been negative, 0% will be charged for the day and the negative fee will be carried forward to reduce the next day's fees (and all subsequent days until the underperformance is recovered). For example, 6% annualised underperformance would result in an annualised fee rate of -0.2%. 0% will be charged that day and the fee calculated the next day will be reduced accordingly. This means the fee retains the symmetry that ensures that you don't pay benchmark fees for below benchmark performance, as can be the case with conventional high watermark fees or fixed fees.

The proposed fee does not have an explicit cap - rather it is limited by the extent to which the Fund outperforms other equity funds. The uncapped maximum fee allows us to charge a lower fee for benchmark performance and is needed because the fee for performance is not spread out over a longer period.

The fees relate only to the allocation managed by Allan Gray. Orbis charges its own fees. We would not charge extra fees on the assets invested in Orbis Funds, and there would be no double counting. Orbis fees have been a bit lower, on average, than the Fund's current fee, meaning that any allocation to Orbis is also expected to reduce the cost of investing in the Fund.

To illustrate the potential reduction in cost, Table 2 shows the actual average investment management fees per year that have been charged in the Fund for the past 10 years, compared with what they would have been had the proposed fee been in place since the Fund's inception. As you can see, the new fee would have been 0.8% lower per year on average for the 10-year period. 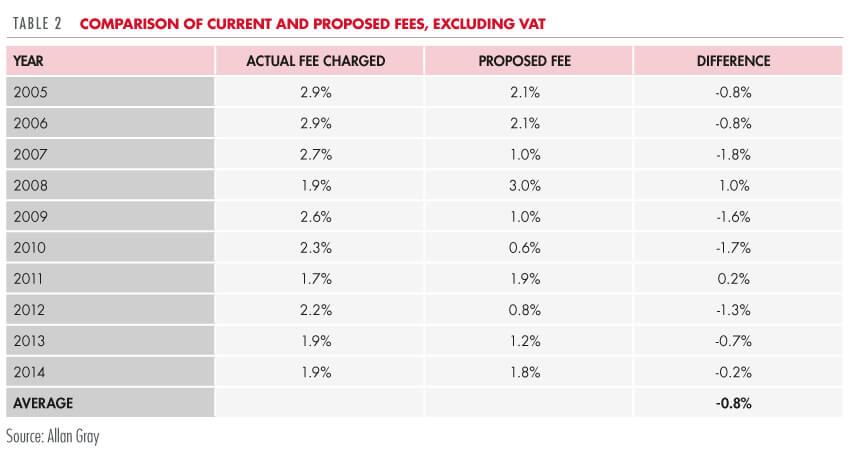 The investment management fees here exclude VAT. The fees are based on the actual investments held in the Fund historically and therefore exclude the impact of any offshore investments that may be made in future. Had the Fund been able to invest offshore historically, the returns earned would have been different, making a perfect fee comparison on this basis hard to set out.

Please vote for or against the changes

The ballot closes on 6 February 2015 and, if successful, we aim to implement the proposed changes on 1 March 2015. Regardless of the outcome of the ballot, you remain free to switch or withdraw your investment from the Fund without additional fees or charges, but this may constitute a capital gains tax event. Please contact us on 0860 000 654 if you need any assistance or speak to your financial adviser.

Richard joined Allan Gray in 2007. He is head of Assurance and is responsible for Compliance, Risk, Internal Audit and Group Legal. He is also a director of Allan Gray Life and Allan Gray Investment Services. He was previously jointly responsible for the Retail business, heading up Product Development. Richard holds a Bachelor of Business Science degree in Actuarial Science from the University of Cape Town and is a qualified actuary.

Jacques Plaut and Duncan Artus discuss the positioning of our equity and multi-asset funds given the pre-existing trends exacerbated by the war in Ukraine....