Long-term investing should have nothing to fear from the Viceroys

Activist short sellers have been a prominent feature in stock markets for many years. It’s easy to get caught up in the hype when their ideas hit the news. Leonard Krüger explains how a disciplined investment process, applied consistently over time, helps to overcome the temptation to pile in (or out) based on the headlines.

In December 2017, an American investment firm, Viceroy Research, published an explosive report on Steinhoff International just as the company announced the delay of its financial results due to accounting irregularities and the immediate departure of its CEO. The dramatic collapse of Steinhoff’s share price that followed inflicted large losses on shareholders, and Viceroy’s happy coincidence of timing allowed it to claim a major scalp for activist short sellers.

Trepidation and rumour quickly spread when Viceroy announced shortly thereafter another pending research report on a major listed South African company. This caused large share price declines in Aspen Pharmacare and the Resilient stable of property companies. Ultimately, a report on Capitec Bank was released, with a greater than 20% share price fall in its aftermath.

While we won’t always get things right, we believe we are well-positioned to deal with the fear and speculation caused in an era of increased public activist scrutiny. Our investment philosophy, at its core, involves proprietary fundamental research for every share we consider for investment in client portfolios. Assessing the risk/reward trade-offs and margin of safety is a key consideration of our investment process. This investment process has been refined over many economic cycles but remains dynamic as we are always trying to learn from our mistakes and to make improvements over time. Responsible investing considerations, which Raine Naudé discusses in her article, form an explicit part of the investment process.

The value of our investment philosophy and process can be illustrated using examples of companies that were the subject of recent short-selling rumours.

Graph 1 shows the share price rise and fall, as well as the change in some of Steinhoff’s high-level metrics over the past 10 years. The table accompanying the graph highlights the massive increase in issued shares, intangible assets, debt and employees as the business grew and made acquisitions over this period. Important shareholder metrics, like return on equity (ROE) and growth in earnings per share (EPS) were, however, uninspiring. ROE declined from 20% in 2007 to only 9% in 2017 and EPS grew by only 17% in euros, or 1.6% per annum. 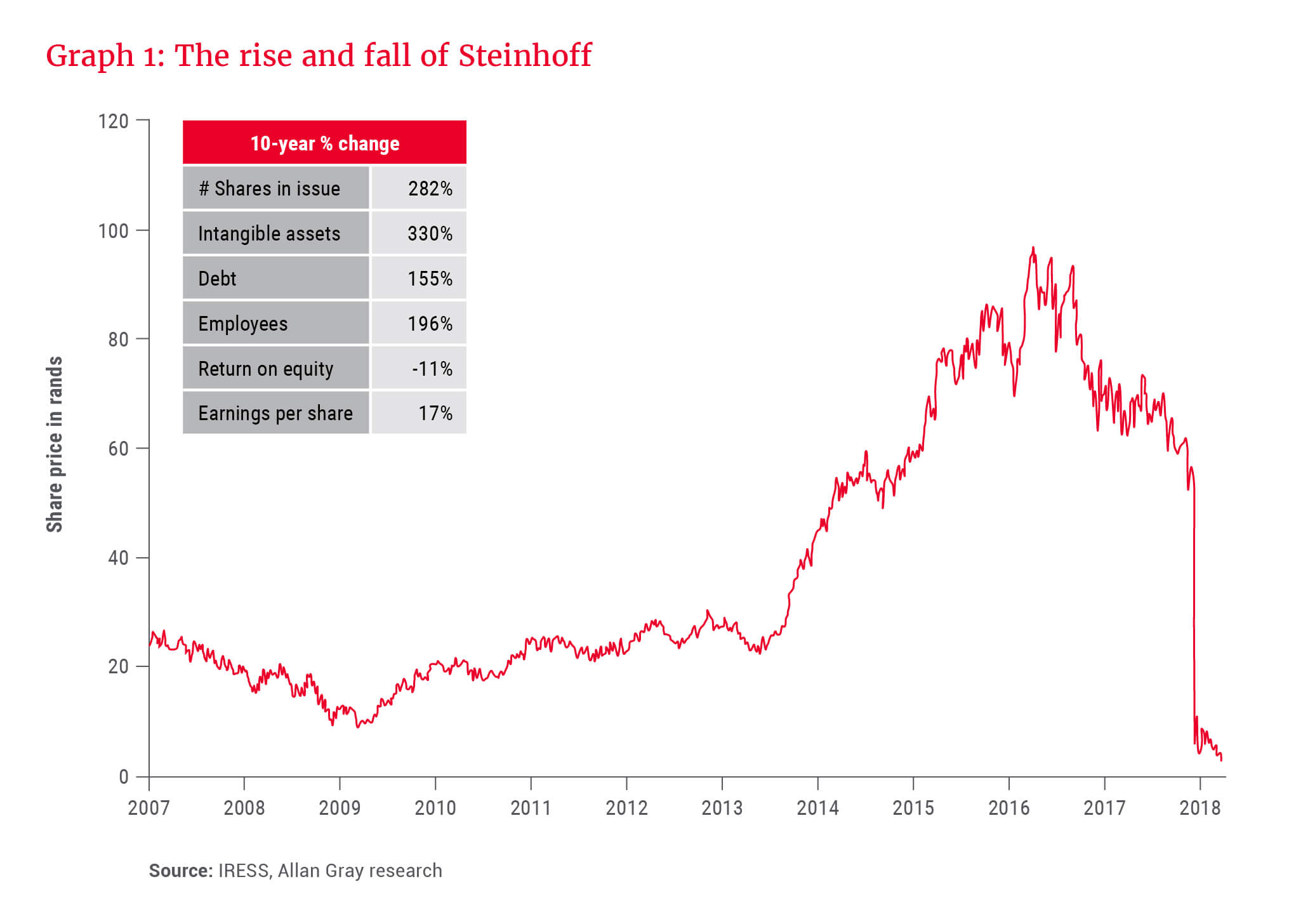 During this period, Steinhoff went through the full Allan Gray investment process on six different occasions. This was in addition to the regular review of company results, news events and management meetings. Numerous warning signs and inexplicable actions flagged Steinhoff as a high risk and below-average prospective investment. Disappointingly, in October 2017, with the stock down 40% relative to the market over 18 months, we believed the price was sufficiently low to justify a small (less than 1%) position in client portfolios. Due to the risks flagged in our investment process a strict limit was placed on the maximum possible exposure to Steinhoff. Although this didn’t make us feel any better about the outcome, it did help to avoid a bigger loss.

Another recent example demonstrating the value of a robust investment process amid uncertainty and activist short seller rumours is the Resilient REIT property company.

Graph 2 shows the share price compared to the net asset value (NAV) or book value of Resilient over time and the dramatic recent loss in value. 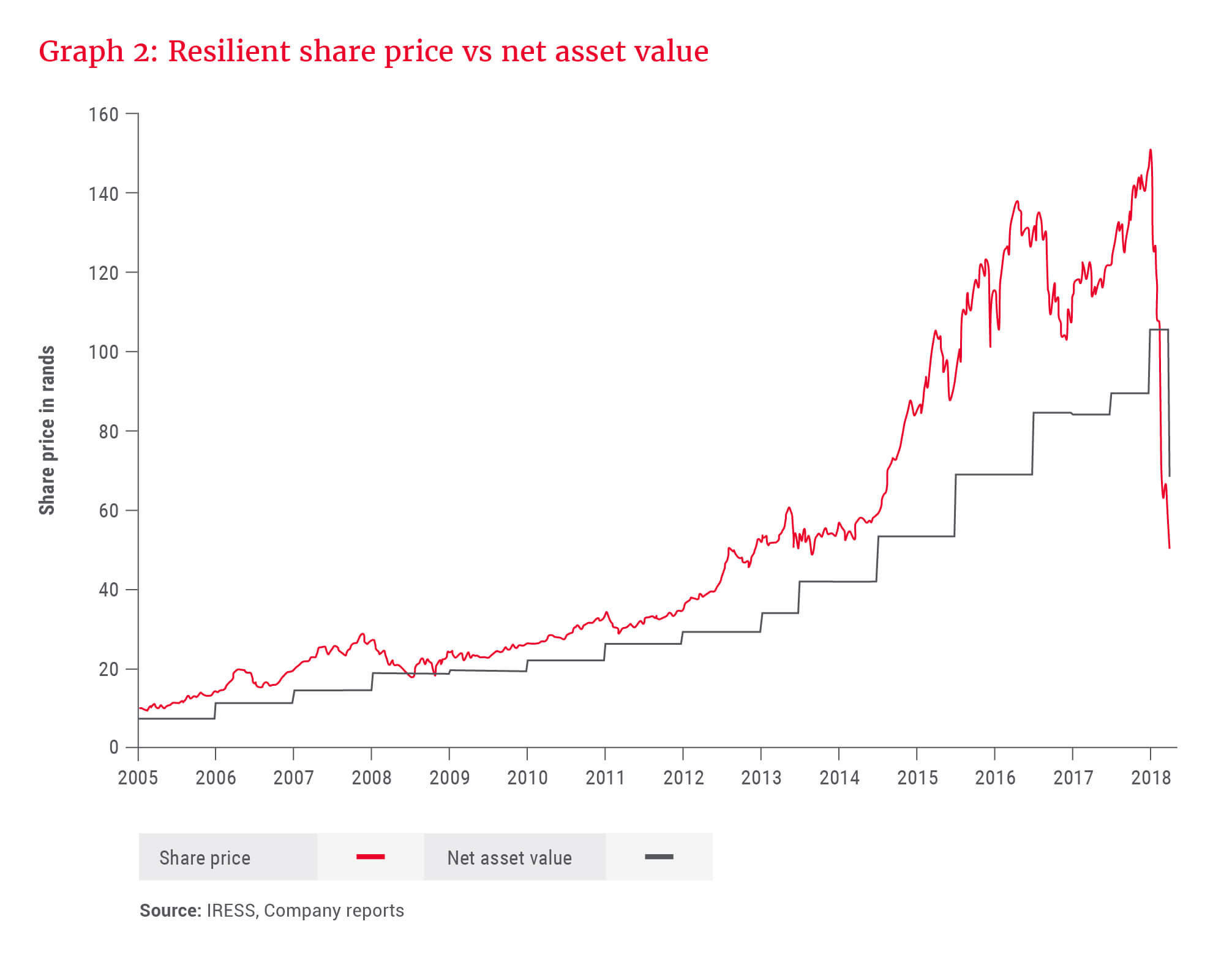 The substantial historical premiums of the share price over NAV show the very high expectations the market held for Resilient. This implied little or no margin of safety for shareholders in the event of any unforeseen events. This was despite a number of potential risks that were identified during our research process:

Graph 3 illustrates our assessment of the quality of distributed income from Resilient compared to domestic peers Growthpoint and Hyprop. Resilient derives a substantial portion of its income from sources that we classify as of a low or medium quality. Actual cash flows only covered 78% of the most recent dividend as “low-quality” sources of income like interest earned on loans granted are recognised as income by Resilient even though it does not receive the actual cash. Peers’ actual cash flows more closely reflect their distributable income declared as dividends. 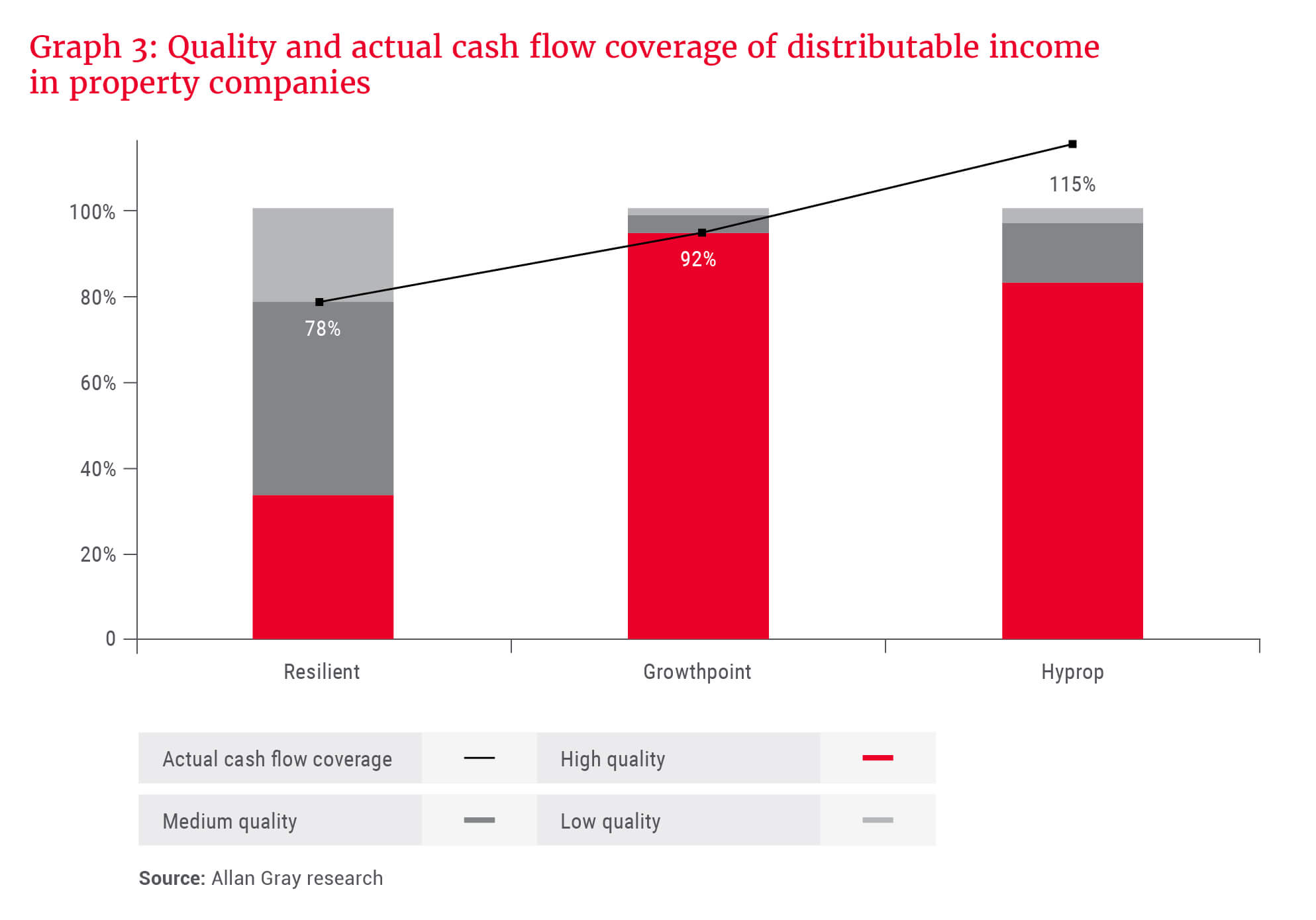 With no margin of safety and some material risks identified in the investment research process, Allan Gray holds no exposure to Resilient REIT.

Doing our own work

Short-selling activists like Viceroy perform a useful function in the market by making people more aware of the potential risks in shares like the two examples shown here. They should hold no fear for the diligent, active fund manager, nor for the rational, disciplined investor. Doing our own work to understand the risks, potential returns and the margin of safety is part and parcel of the research effort.

We don’t always get things right, but having a robust process for assessing value and a philosophy that has been proven over long periods allows us to make up our own minds about which shares to avoid and where to take advantage of large short-term share price declines. The ability to limit or avoid losses from permanent capital destruction, as occurred in the cases of Steinhoff and Resilient, can be as important as finding the next big winner.

In pursuit of value

The current disparity in markets, both locally and offshore, is creating an opportunity for bottom-up investors like ourselves to generate meaningful returns...

Investment lessons from a pandemic year

A year on from our stringent Level 5 lockdown, much of 2020 seems surreal. While there are many aspects we may prefer to forget, reflection reveals valuable...

Taking a long-term, contrarian approach has influenced every aspect of how we invest and do business at Orbis and Allan Gray. From the way the firms are...