It is widely accepted that distributed ledger technology, such as blockchain, has enormous potential. Like many new technologies it could be truly transformational for many industries and have a meaningful impact on how business is conducted globally. Bitcoin, the world’s largest cryptocurrency, is perhaps the most well-known example of something which makes use of this technology and, whilst there are strong opinions on both sides of the fence with regards to the merits of the technology, that conversation is best left for a different time. Instead, the focus for investors at this point of the current crypto price cycle should be on how best to value cryptocurrencies, and what a reasonable expected long-term return should look like. Shane Woldendorp, from our offshore partner, Orbis, offers a view.

The price that you pay for any asset is what really matters over the long term for an investor and has also proven to be a reliable indicator for future returns. But how should you, as an investor, attempt to estimate what something such as Bitcoin is really worth? Options typically include a discounted cash flow method or a sum-of-the-parts/asset-based approach. Unfortunately, given cryptocurrencies don’t pay any cash flows or own any tangible assets, both of these approaches are not very helpful. Historical prices are also not useful, given many cryptocurrencies are new and the first Bitcoin was only traded in 2009. As a result, this makes cryptocurrencies difficult to value and therefore prone to speculation.

What is a reasonable return for currencies and collectibles over the long term?

There are perhaps two useful ways to think about the long-term returns that you should expect from cryptocurrencies. The first is to view them as a currency such as the US dollar, British pound or gold. Over the last 120 years (1900-2020), cash in the US and UK have achieved returns of around inflation plus 0.8% and 1% p.a., in US dollars, respectively. Similarly, over the same time period gold has produced a return of inflation plus 0.7% in US dollars.

The other argument commonly used is that the supply of something such as Bitcoin is limited, and therefore there should be a premium for this scarcity. The same is of course true for your favourite antique watch or real estate in Greenland – just because it’s scarce doesn’t mean it’s valuable. However, let’s be charitable and assume that cryptocurrencies fall in the same bucket as rare stamps, coins, art, or diamonds. In other words, let’s treat cryptocurrencies as a collectible. Over the period 1900-2017, collectibles delivered a return of inflation plus 2% p.a. in US dollars. Therefore, if you believe that cryptocurrencies are either a currency or a collectible, history would suggest that you should expect a return over the long term of between inflation plus 1 to 2% p.a. in US dollars.

Graph 1 shows the price history in US dollars of both Bitcoin and Dogecoin. As you can see (this article was written before the full extent of the recent fall in Bitcoin and Dogecoin), they have both recently experienced enormous price increases with year-to-date returns of around 90% and 9 500% respectively. These levels of returns are much higher than history would suggest is a “normal” range for both currencies and collectibles – as explained above. This is particularly remarkable for Dogecoin given that it started as a joke on social media. At the time of writing, the market cap of Dogecoin was around US$60 billion, approximately the same size as Australian Securities Exchange-listed companies Australia and New Zealand Banking Group and Fortescue Metals, despite Dogecoin not producing any cash flows, products or owning any tangible assets. 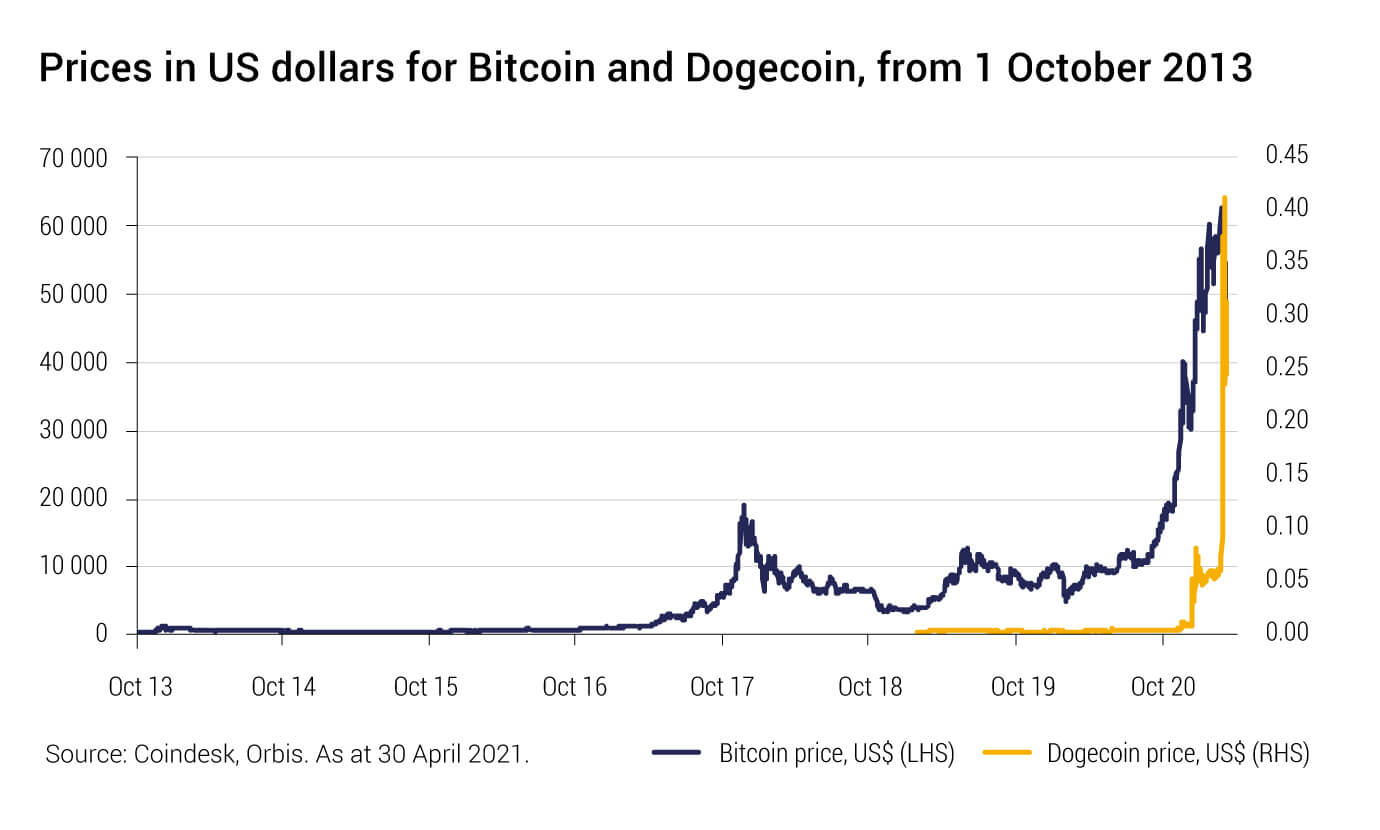 What are the key ingredients required to form a speculative bubble?

As a result of these remarkable returns, many inexperienced investors have been attracted to cryptocurrencies, including many people who have never invested before. And this creates a virtuous flywheel – new people join the game, prices rise, they talk about it, the fear of missing out or “FOMO” attracts more investors and prices rise further. According to a recent poll by The Harris Poll, nearly 1 in 10 Americans used their stimulus cheques to invest in cryptocurrencies. Perhaps the speculative behaviour seen in parts of financial markets more recently, such as cryptocurrencies, shouldn’t come as any surprise. You could argue that we have actually created the perfect recipe to encourage speculation by market participants.

Firstly, there is an abundance of liquidity. Globally, there are many people who are either unemployed or underemployed, but unusually they also have money in their pockets thanks to government and central bank support. Moody’s estimates that there is currently around US$5.4 trillion or more than 6% of global gross domestic product (GDP) in excess savings. In other words, savings that people would not have if the COVID-19 pandemic had not occurred.

The second feature is lockdowns. As a result of the COVID-19 pandemic, many parts of the world either have had or currently have lockdowns. People therefore haven’t been able to spend this excess money in the usual places as travel is banned, restaurants and bars are shut, cinemas and theme parks have been disrupted, and casinos have also been closed. Live sport (and as a result sports betting) has also been halted in many parts of the world. However, financial markets is one area that people have still been able to participate (and speculate) in.

And finally perhaps the most important recipe for a speculative bubble to form is something new and shiny to attract an investor’s attention. If one looks at past speculative periods, one thing you will notice is that many of these periods were associated with things that were brand new. For example, new flowers in the Dutch Tulip Mania in the 1600s, new forms of transport in the Canal and Railway Manias in the 1790s and 1840s, and the creation of the internet in the Dotcom bubble in the late 1990s. Perhaps we will look back in time and say that in the 2020s, it was digital currencies.

In conclusion, there are certainly signs of speculation in the cryptocurrencies space as many new and inexperienced investors have been attracted to the asset class. In addition, the current environment seems to have all the necessary ingredients required for a bubble to form. Finally, the recent returns experienced by Bitcoin and Dogecoin are well above what history would suggest is a reasonable return over the long term, assuming you think of them as either a currency or a collectible. Investors should always be wary whenever an asset delivers a return which is well above what history would suggest is “normal”.

When investors all head in one direction, it can often be safer to go the other way. Of course, this is highly uncomfortable, but as contrarians we believe that discomfort is the reason so few do it – and those who do may be highly rewarded. Remaining disciplined in an environment like this isn’t easy and perhaps it’s worth remembering the famous advice of Warren Buffet: “Be fearful when others are greedy, and greedy when others are fearful.”

Shane joined Orbis in 2014 and is a member of Orbis’ team of Investment Counsellors, which is responsible for servicing Orbis’ institutional clients and investment consultants. Previously, he worked in the Private Clients team at Allan Gray. Shane holds a Bachelor of Science degree in Environmental & Geographical Science and Economics and a Bachelor of Commerce (Honours) in Financial Analysis and Portfolio Management, both from the University of Cape Town, and a Postgraduate Diploma in Financial Planning from the University of the Free State. He is also a CFA® charterholder.

LISTEN : Podcast: How to think about investing in an energy-short and volatile world

From the global technology stock sell-off and rising inflation, to the war in Ukraine exacerbating a global energy crisis, investors are tasked with navigati...