When one considers the importance of entrepreneurship in driving job creation, South Africa's very low level of entrepreneurial activity partly explains why our country has such unacceptably high levels of unemployment. Anthony Farr discusses the Allan Gray Orbis Foundation's ongoing drive to improve the entrepreneurial pipeline by focusing on improving South African youths' perceptions of their own capabilities and the opportunities around them.

Despite the wave of interest and rhetoric around the importance of an entrepreneurial culture in South Africa, sadly the hard facts do not support this aspiration. In the latest Global Entrepreneurship Monitor 2012 Report, the largest annual entrepreneurship study in the world covering countries representing approximately 85% of the world's economy, the proportion of South African adults involved in early stage entrepreneurial activity dropped to 7.3% from 9.1% in 2011. This was the lowest of all 10 Sub-Saharan Africa countries participating in the study and is probably half the level our country requires.

Further investigation revealed that this poor outcome stems from a weak entrepreneurial pipeline. Focusing specifically on youth between the ages of 18 and 34, the pool of potential entrepreneurs is drawn from those individuals who have a combination of both perceiving that there are good opportunities and perceiving themselves to have entrepreneurial capabilities. In South Africa this proportion of potential entrepreneurs in the total youth population is 20%, a full two-thirds less than the Sub-Saharan average of 60%. When one considers the importance of entrepreneurship in driving job creation, these statistics start to explain why our country has such unacceptably high levels of unemployment. This pipeline approach gives us a clue as to where to begin addressing the problem. If we are able to shift our youths' perception of both their capability and the level of opportunity around them it would quickly improve the depth of the country's overall entrepreneurial pipeline. Opportunities exist here at least as much as elsewhere in Sub-Saharan Africa, therefore the perception of opportunity and both actual and perceived capability offer important levers with which to influence the entrepreneurial culture of the country at source.

Addressing these levers is a complex task and there are no single responses that will tackle this deficit. However, at the Allan Gray Orbis Foundation we have come to respect the importance of two ingredients that we see as having an important influence on both levers, namely grit and community.

A focus on grit and community

In his book 'How Children Succeed', Canadian author Paul Tough speaks about the seven character traits which are key to success. They are grit, curiosity, self-control, social intelligence, zest, optimism and gratitude. The most intriguing one on this list is an old concept with a new term, 'grit'. According to Wikipedia, grit is defined as 'perseverance and passion for long-term goals'. In the Foundation's context, we call it 'Courageous Commitment', which is one of the five pillars against which we select future Allan Gray Candidate-Fellows and which is then developed further as part of the Fellowship journey. We define it as 'the courage and dedication to continue, realising that applying consistent commitment has a way of overcoming'. Interestingly, given its importance in the Fellowship process, an increasing number of studies are pointing towards this notion of grit as a far better predictor of future success than other dimensions such as IQ. This resilience and unwavering determination are also key to unlocking a different level of perception of one's capabilities, as well as growing the universe of potential opportunities that one feels able to pursue.

Secondly, a powerful community, particularly one inspired by a 'Spirit of Significance' (a second pillar of the Foundation), has a catalysing impact on the boundaries of possibility for those within the community. Such communities in their own right, and through their natural fostering of grit among those involved, start to move the levers of capability and opportunity perception.

The Foundation looks to accelerate the building of community through a number of avenues. In addition to online platforms and social media, the entire Fellowship cohort is brought together at the start of their journey at the 'Fellowship Connect' event. At Connect, second year Candidate- Fellows gather in Villiersdorp to make an impact on a cohort of Grade 9s at a local school by working to create a programme that instils a sense of belief and hope in these learners. This is part of a long-term project in which the concept of legacy is shared in an experiential manner and kickstarts the Candidate-Fellows Legacy Project. By utilising the mechanism of a shared experience, the power of the Fellowship community is cemented.

The Association of Allan Gray Fellows continues to gain momentum both in terms of growth and early stage entrepreneurial activity. At the end of 2012, 53 additional Allan Gray Fellows graduated, joining the existing 98 to make a total of 151 Alumni. An Allan Gray Fellow's initiative, The Eduvator Platform, which was begun during the annual Association Startership Challenge, received R50 000 from the Design Indaba and R25 000 from E2. The concept involves a crowd-sourced funding platform that allows citizens to donate a small contribution, which is then used to make improvements to the classroom environments of underprivileged schools. Benefactors are able to observe the results of their contributions in real time, via a technological platform. The Association's executive team continues its efforts to ensure that the Association remains a focused body with strong ties to the Foundation and one which regularly participates in Foundation activities.

WE’VE ALL BEEN THROUGH THE FIRE. THE FOUNDATION... HAS FULFILLED THE ROLE OF THIS CONSTANT DRIVE THAT ENCOURAGES US TO PUSH BEYOND WHERE WE FELT COMFORTABLE.” (ALLAN GRAY FELLOW)

In its eighth year, the Foundation has 241 Candidate Allan Gray Fellows across nine campuses in South Africa. We proudly recognise some of the recent Fellow achievements:

Fellowship selection for placement in 2014 is progressing well and in recognition of prior school performance in consistently producing Candidate Allan Gray Fellows, the latest listing of the Foundation's 100 Circle of Excellence Schools can be found on our website.

In its sixth year, the Foundation has 175 Allan Gray Scholars across 21 leading schools in South Africa. Since our update in Quarterly Commentary 4, 2012, we have completed the selection process for placement next year, resulting in 30 additional Allan Gray Scholarships being offered. We have celebrated the recent achievements of some of these Scholars including a head boy of Selborne College for the second year in a row, head girl of Rhenish High School, a deputy head boy of Bishops Diocesan College, selection for international exchange programmes, a top academic in grade and a gold medal in the Science Expo.

In conclusion, as we strive to improve the quality and depth of our own entrepreneurial pipeline, this combination of instilling grit within a focused community was best encapsulated at the recent Foundation Graduation where one of the Allan Gray Fellows had this to say:

'We've all been through the fire. The Foundation over the years has fulfilled the role of this constant drive that encouraged us to push beyond where we felt comfortable. We've seen each other stumble, we've poured out our hearts and, as a result, are privy to secrets very few others ever will be. It is this connection that has created a bond so strong that we cannot help but offer support when we see another Fellow trip; but at the same time, it is this same "bond" that causes us to revel in each other's successes. Fellows, today we celebrate, because today we see four years of effort, determination and drive carrying us over the finishing line.' 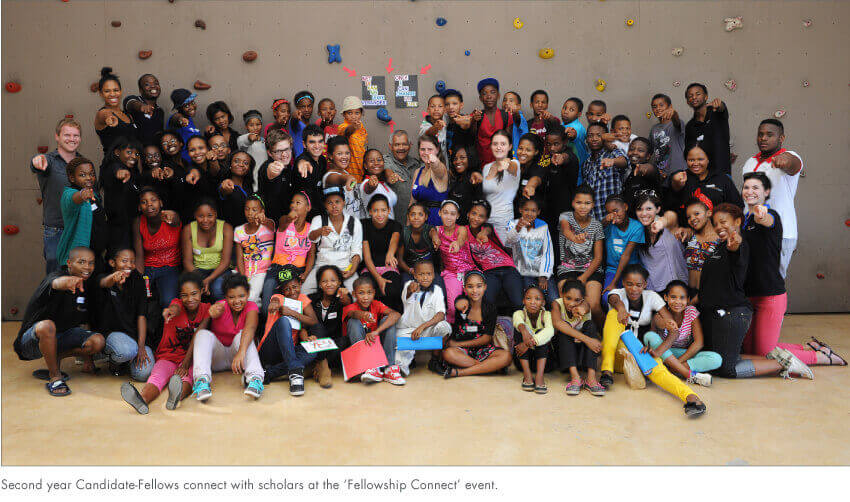