EXECUTIVE SUMMARY: 2012 was a significant milestone in the journey of the Allan Gray Orbis Foundation, giving a glimpse of the end in mind. The long road towards high-impact entrepreneurial leadership starts with small steps and it is only after enough time has passed that it is possible to get a view of whether or not these chosen steps are the ones that will lead to the destination. Margie Worthington-Smith takes us on the journey.

Flowing through 'the pipeline'

The Foundation describes its role in the continuous process from primary school to the end of university as 'the pipeline' - analogous to that supportive structure that carries life-giving water over a long distance for a long time.

The flow begins with a rigorous process of identifying young people with potential and need in Grade 6, and progresses them through a structured supportive programme during their time at one of 16 selected placement high schools. It continues through another even more rigorous selection process at the end of Grade 12 (or in first year at university) and into a further structured supportive programme during the four years at university. The culmination of the Foundation's role in the pipeline is the graduation of these Candidate Fellows to the official status of Allan Gray Fellows and into membership of the Association of Allan Gray Fellows. This membership gives these Fellows the opportunity to apply for funding from E2, the special purpose venture capital fund. But this pipeline has not always looked like this; our experiences from year to year have encouraged us to make fundamental changes.

The Foundation's initial strategy was to support students only at university with the understanding that if they had the required academic standards they would be eligible to apply for the Fellowship programme.

The first flow through the pipeline began with the first selection camp for Grade 12s held in 2005, leading to the first eight university graduates in 2008, and has now reached a force of 229 at university. The trouble with this approach was that, due to the slow pace of educational redress in the country, too many of the eligible applicants were not previously disadvantaged, and we felt our reach was not broad enough.

Therefore, to broaden the pool of Fellowship applications from financially disadvantaged groups and to ensure that a greater number of scholars would not be disadvantaged by their lack of access to good educational opportunities, the Scholars programme was established in 2008 to include an opportunity for high school scholars to enter the programme. This has helped to increase the quality and reach of the flow, and has added a further 150 potential Candidate Fellows to the stream.

The Scholarship Selection team selects candidates from a diverse pool of applicants from all over the country, and places deserving applicants in schools that have produced a significant number of Allan Gray Fellows. As a result, there will be an increase in the access to quality high school education among financially disadvantaged South Africans - resulting in a broader stream of eligible applicants to the Fellowship.

Many outstanding achievements in 2012

Last year saw the first cohort of 12 Allan Gray Scholarship learners reach Grade 12. Of these 12 who have now been through the Fellowship Selection process, two have been chosen as Candidate Fellows for 2013. Although few in number, we are delighted that, given the low base from which they came, these Scholars succeeded so well academically and in leadership opportunities that they were able to compete with the other applicants on merit and be chosen as Candidate Fellows. We look forward to these numbers increasing year on year as we push to achieve our goal of 50% of Scholars becoming Candidate Fellows.

The two successful Scholars join the 86 Candidate Fellows selected for the 2013 intake into university. This brings the total of Candidate Fellows studying at nine South African universities to 238. Already graduated, after four years at university, are 98 Fellows who are starting their life journeys towards significance within the Association of Allan Gray Fellows. In March 2013 the Alumni Association is expected to grow by an additional 48 members as the class of 2012 officially graduates.

At this juncture of the Foundation's journey, it is gratifying to witness the effect the opportunity is having on young South Africans. Without the Foundation's support many of these learners may well have remained in schools with little or no opportunity for academic excellence or leadership development; instead, many have excelled beyond our wildest expectations.

A few examples of some of their achievements will bear this out: a young Grade 8 Scholar at Collegiate Girls has been selected for a provincial hockey team to tour Europe; a Scholar in Grade 10 at Maritzburg College was part of the choir which came second in the world choir championships, going on to record a CD and being in the top 10 of the singing talent competition. At the same school a number of Scholars received academic merit awards coming in the top 10 in their grade. At Clarendon two Scholars will be school prefects in 2013 and one Deputy Head of the Hostel. At Selborne the Head Boy will once again be an Allan Gray Scholar and, like his predecessor, also has an overall academic average of over 80%. Together these two particular Scholars have started a 'Prides Movement' organisation working in township high schools, facilitating the concept of pride in self in young people in these communities.

At Rhenish, the Head Girl for 2013 is an Allan Gray Scholar with another Scholar having been chosen as Prefect and Deputy Head of House. Further Scholars at Rhenish have travelled to Malaysia on a hockey tour and represented WP U16 hockey. At Bishops, a Scholar is Deputy Head Boy for 2013 with two Scholars chosen as Heads of Houses. Another Scholar at Bishops came first in the grade and won a gold medal at the Eskom Regional Science Expo and a bronze medal at the Nationals. Two Scholars at Bishops travelled to Greece on a music tour.

At Paul Roos a Scholar is a Hostel Prefect and at St Cyprians a Scholar also represented the school on a Malaysian hockey tour. At Rustenburg a Scholar won the bronze President's Award and another is Head Deputy Form Captain. At St Mary's Waverley a Scholar went on an exchange to London. Too many other Scholars to mention in the lower grades in many of the placement schools also received numerous recognitions in sport, debating, chess, academics, Olympiads and drama. This bodes very well for the cultural, sport and academic achievements and leadership positions we can look forward to from Scholars in future years.

MANY [ALLAN GRAY SCHOLARS] HAVE EXCELLED BEYOND OUR WILDEST EXPECTATIONS

If we add to that the phenomenal achievements of the Candidate Fellows at university and those who have graduated, there is no doubt in our minds that the vision of Dr Allan Gray of long-term economic and societal wealth through high-impact, ethical entrepreneurial Allan Gray Fellows, is well on the way to becoming a reality. 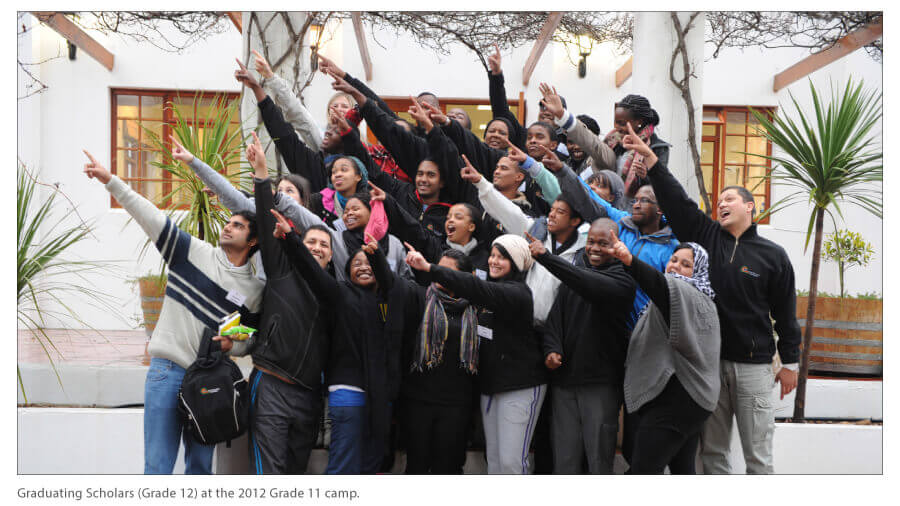 For a more detailed look at the Foundation's activities in 2012, we encourage you to watch our 'Year in Review 2012' video on our YouTube channel.

Margie is the executive director responsible for strategic and functional management at the Allan Gray Orbis Foundation. In this capacity she contributes to the Foundation's vision of a new generation of high impact entrepreneurial leaders. Prior to joining the Foundation in 2009, Margie spent over 25 years in the SA education and development sectors.