Sasol: A history of underestimation

Sasol is our clients' largest equity investment. Founded in 1950 and listed in 1979, Sasol's core business is to produce synthetic liquid fuels and chemicals, based on its proprietary coal to liquids (CTL) and gas to liquids (GTL) technology. Over time Sasol has expanded its operations beyond South Africa's borders to include, amongst others, chemical plants in Europe and North America, gas assets in Canada and Mozambique, and a GTL plant in Qatar. Rory Kutisker-Jacobson looks at the investment case for the company.

When valuing a company, a standard approach is to apply a multiple to that company's earnings. The earnings multiple one is willing to pay should reflect that company's ability to sustain, and indeed grow earnings. Shares with above-average long-term growth rates deserve higher price-to-earnings (PE) multiples and vice versa.

Since 1980, the PE multiple on which Sasol has traded has been at an average discount of 20% to the FTSE/ JSE All Share Index (ALSI), and often as high as 40%. This implies that historically the market has considered Sasol a below-average business, with inferior growth prospects. Sasol's earnings are highly dependent on the rand and the dollar price of oil, both of which can fluctuate wildly and are beyond the control of management. This makes Sasol's year-on-year change in earnings unpredictable and cyclical. One must be wary of confusing cyclicality with inferiority though, as through the cycle a company may still be very profitable when the good and bad years are added together.

An analysis of Sasol's long-term performance suggests that historically, on average, the market has grossly mispriced the business. Graph 1 shows the earnings of Sasol relative to the ALSI rebased to 1. Since 1980, Sasol has grown its earnings at a compound annual rate of 15.9% versus the market's growth rate of 11.7%, whilst maintaining a 'payout ratio' similar to that of the market. Shareholders in Sasol who invested in 1980, would now be receiving dividends three times greater than the average dividend on the ALSI. It is not often one finds a stallion selling for the price of a donkey. 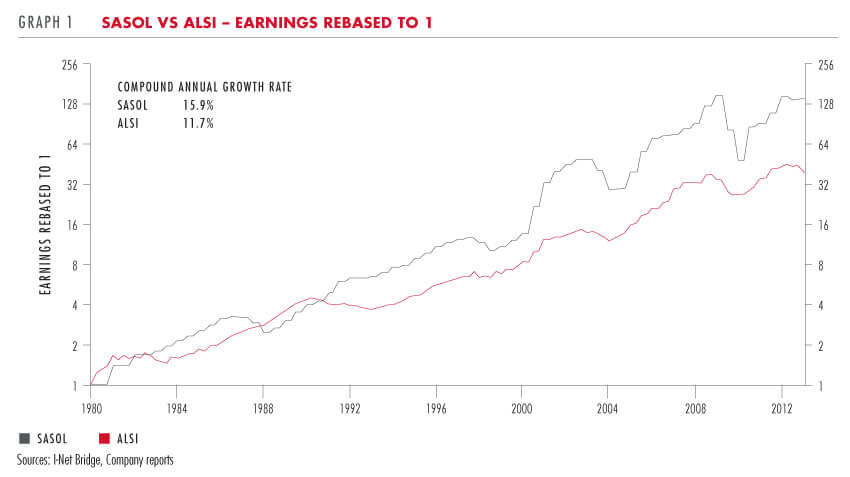 The ‘payout ratio’ is the portion of earnings paid out in dividends to shareholders. A company which is able to pay
out a greater proportion of its earnings, while still maintaining an equal or superior rate of growth to the market,
would be considered a higher quality company.

As mentioned above, the most important determinants of Sasol's earnings are the rand and the dollar price of oil. When valuing Sasol, it is thus important to have an estimate of what a normal rand oil price is. Graph 2 shows the price history of oil in real and nominal terms since 1861. It is hard to argue that the current oil price of US$103 per barrel is low by historical standards.

The question then becomes: Why is the oil price high, and, more importantly, is a significant decline in the future likely? 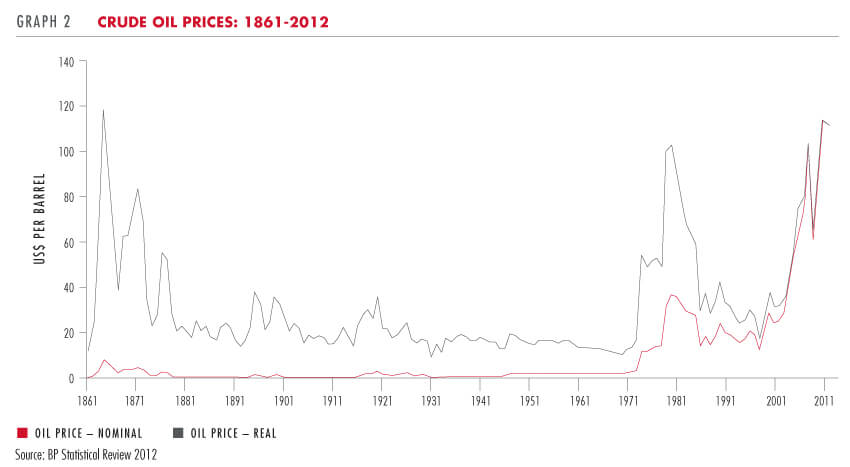 Unlike many commodities, the oil market is somewhat unique in that the swing producer is one of the lowest cost producers. Roughly 43% of world production comes from the Organisation of the Petroleum Exporting Countries (OPEC), with Saudi Arabia being the largest producer. Saudi Arabia is also the only OPEC country with significant spare capacity. While the pure cost of extraction in Saudi Arabia is low, the vast majority of government revenue is derived from the sale of oil, which is used to subsidise other industries and social welfare. Current estimates are that Saudi Arabia needs an oil price of between US$90 and US$100 per barrel to balance its fiscal budget. It is in the Saudis' best interests to manage the supply of oil to maximise their revenue per barrel without encouraging demand destruction.

Outside of OPEC, the future supply growth of oil will increasingly come from offshore ventures, more geographically risky areas and unconventional sources such as GTL, Canadian tar sands and shale oil. Future oil prices will probably need to be higher than those of the past to meet the higher cost of bringing these projects on stream. At present, the marginal cost of producing oil from unconventional means is estimated to be between US$80 and US$90 per barrel. In the long term, the marginal cost of supply typically sets the price at which that commodity trades.

We cannot predict the future, and we do not know what the price of oil will be in a week, a month or a year. However, we believe the above arguments provide sound structural reasons why the oil price is unlikely to fall below a real price of US$80 per barrel on a sustainable basis over the long term.

Similarly, we cannot predict the future value of the rand. However, we believe that given the inflation differential between South Africa and the USA, over the long term the rand is more likely to weaken than strengthen. A weak rand is bad for the local consumer, but favourable for Sasol. For the year to June 2013, consensus expectations are that Sasol will earn around R45 per share. At the 28 June closing share price (R432 per share), Sasol is thus trading on less than 10x earnings, compared to the ALSI's PE multiple of 16.4x. With oil averaging R960 per barrel, the last year has been a favourable trading environment for Sasol, and earnings are arguably high. We estimate that Sasol would earn approximately R36 per share at a lower oil price of R760 per barrel. Even then, Sasol's PE would be closer to 12x, still well below that of the ALSI.

Once again the market appears to be discounting very poor earnings growth expectations into Sasol's share price relative to the average company. Is the market right this time?

Sasol is considering very ambitious growth projects, which, if successfully completed, will see the company's total production volumes on a barrel of oil equivalent basis increase by more than 50%.

The two largest projects under consideration are an ethane cracker,at an expected cost of between US$5bn and US$7bn, and a GTL plant, at an estimated cost of between US$11bn and US$14bn, funded via a combination of debt and internal cash flows. Both are likely to be situated near their existing facilities in Louisiana, USA. Sasol is currently undertaking the preparatory work to determine the exact design, costs and expected economics of these projects. The logic behind both plants is compelling. Essentially, Sasol will buy cheap gas as feedstock and using its technology, convert it into petrochemicals and liquid fuels, which are linked to the price of oil. Graph 3 shows the historical correlation between the price of oil and the gas price in the USA. Until recently,the Brent oil price traded at roughly 10x the Henry Hub gas price. From 2009 onwards however, advances in the technology of horizontal drilling have seen an explosion in gas production, as previously unavailable shale gas can now be viably extracted,resulting in excess supply and low prices. This has caused the price relationship between oil and gas to alter structurally. Given the abundance of shale gas reserves and potential available supply, even if a number of new markets are developed for this gas, the relationship is unlikely to revert to historical levels. A final investment decision is expected on the ethane cracker in 2014, with beneficial operation commencing in 2017. As a final investment decision on the GTL facility is only expected in 2016, let us focus on the economics of the ethane cracker. 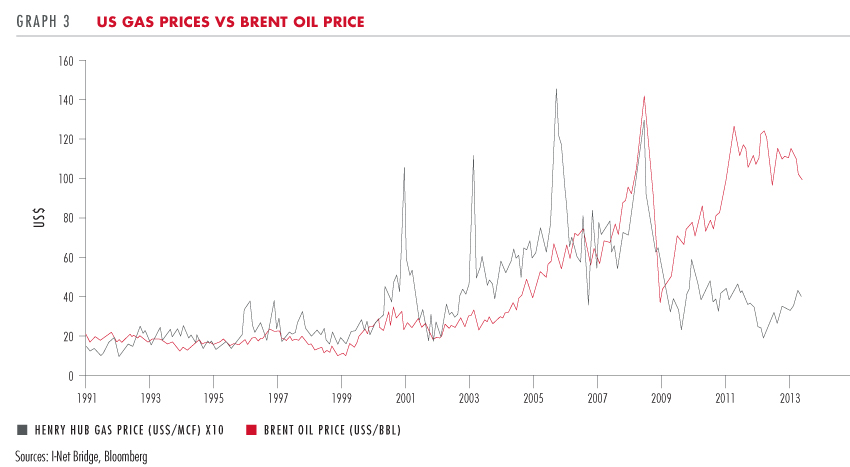 Ethylene is produced using either ethane or naphtha as a feedstock. As ethane is derived from natural gas, its price is much cheaper than naphtha, which is linked to the price of oil. This provides ethylene producers who use ethane with a distinct competitive advantage. Sasol is not the only petrochemical company to notice this opportunity, and a number of new plants are under consideration in the USA. Given the existing size and growth of the market however, even if all the plants under consideration proceed as planned, the marginal cost of production will remain materially higher than Sasol's own cost. We think this provides the proposed ethane cracker with a sufficient margin of safety. Graph 4 shows the global cost curve for ethylene producers and the expected cost curve in 2018 if all the proposed ethane crackers in the USA are constructed. 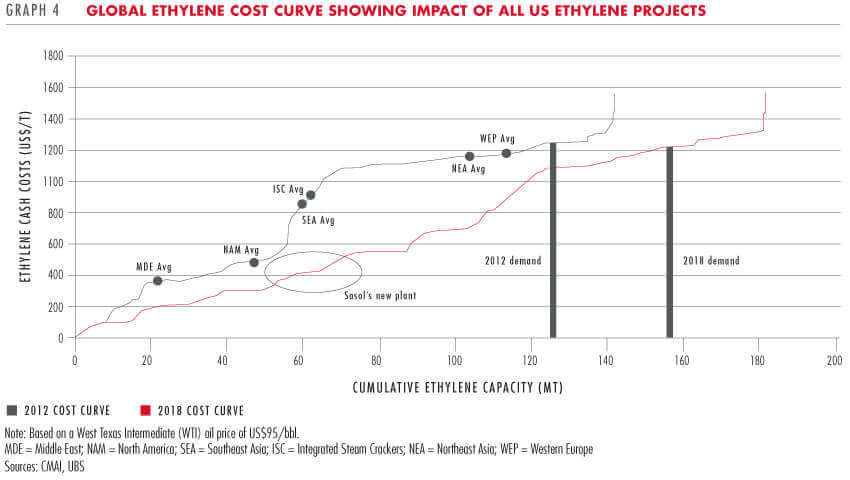 Sasol's performance on capital projects over the past few years has been poor, which has caused the market to lose confidence in its ability to deliver on future projects. The large amount of capital involved on the US projects has given investors further cause for concern. Combined, we believe these doubts are depressing Sasol's share price more than is warranted.

Importantly, as mentioned earlier, a final investment decision on the larger of the two projects, the GTL plant, will only be undertaken in 2016, far into the construction of the ethane cracker. Over this time, Sasol's management will thus have gained valuable insight into their actual experience versus original expectations, and be in a position to incorporate this knowledge into the latter investment decision. At this time management will also have greater clarity on the feedstock and product price environment to be expected. In our opinion, this somewhat mitigates the downside risks.

In our view, the current uncertainties are providing an opportunity for investors to buy the strong existing operations of Sasol at an attractive price and gain exposure to its promising potential projects in North America, where we believe the upside opportunity outweighs the downside risks.

Rory joined Allan Gray as an equity analyst in 2008. He was appointed as a portfolio manager in 2017 and manages a portion of the equity, balanced, frontier markets equity and African equity portfolios. He holds a Bachelor of Business Science degree in Economics and Finance from the University of Cape Town and is a CFA® charterholder.