Deconstructing the investment case for property

The South African property sector has been a huge winner over the last decade, returning 22% per year compared with 18% for the FTSE/JSE All Share Index (ALSI). Yusuf Mowlana and Jacques Plaut discuss how the sector has managed to perform so well, why we don't think this performance will be repeated, and why property companies may be more risky than they appear at first glance.

The past decade has been a very good one for property investors, as shown in Graph 1, which reflects the total return of the property sector compared to shares and bonds over various time periods. Allan Gray clients have been underweight the sector over all these periods. With the benefit of hindsight, this was obviously a mistake. Looking back, we underestimated the extent to which interest rates would decline and stay low under a very accommodative monetary policy in developed countries, and we underestimated the ability of some management teams to add value to their portfolios. On top of this, the resulting tailwind to valuations allowed listed property companies to benefit from earnings-enhancing acquisitions in South Africa and overseas. 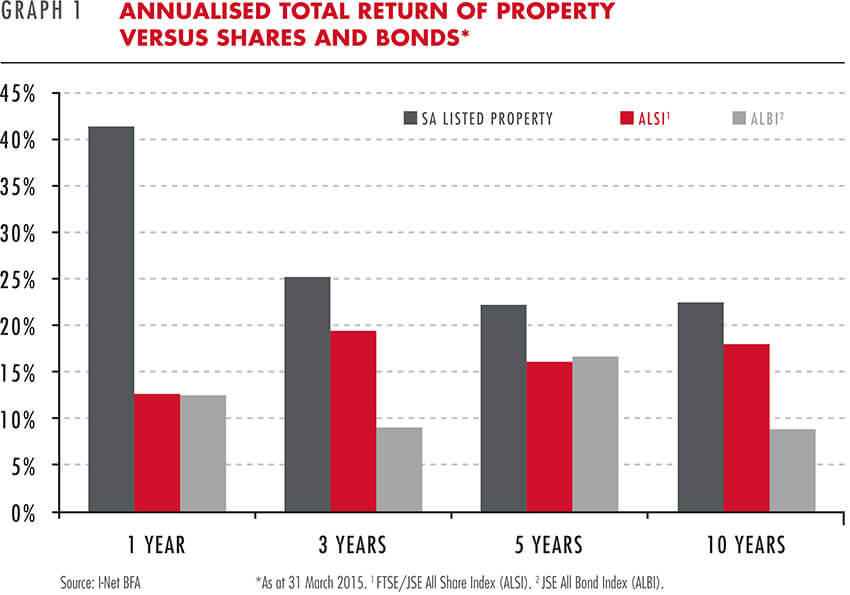 The return on any investment can be usefully broken down into a sum of the initial dividend yield, the growth in dividends, and the change in rating, or ‘re-valuation', over time.

Using this formula, we can break the 22% total annual return from property over the last decade into 8.7% from the initial dividend yield, 7.6% from dividend growth and 5.9% from re-valuation.

...Versus where we are now

While this past decade's performance has been fantastic, it is unlikely to be repeated. Investors who buy into the sector today are only getting a 5.1% initial dividend yield, as shown in Graph 2. This might not seem so much more expensive than the 8.7% yield they would have received in 2005, but it equates to a 70% price increase! 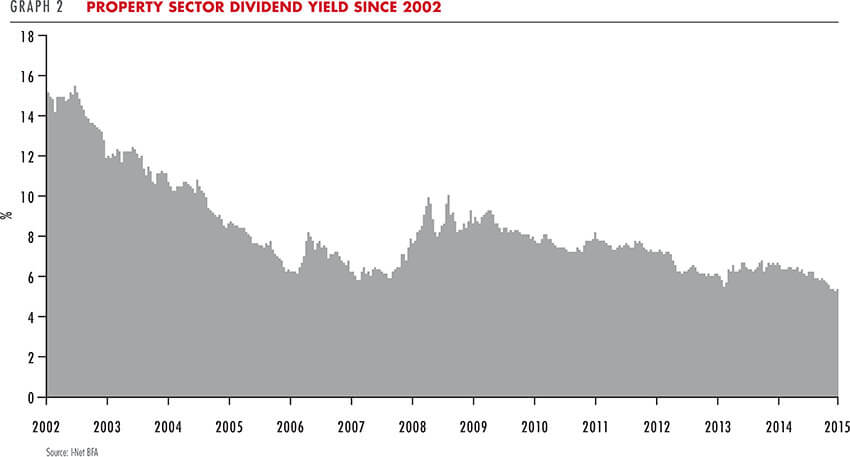 Next, let's consider dividend growth. The sector's 8% growth over the last 10 years is better than inflation, which has averaged 6%, but worse than the average JSE-listed company, which has grown dividends at about 16% per year over the same period. Even this relatively modest 8% is an overstatement of underlying growth, since it has been boosted by acquisitions (which we discuss in more detail later), and by property companies paying less interest on their debt.

More generally, the upside from owning a property share is limited compared to other businesses. Some companies can re-invest earnings at a 30% plus return on equity, property companies tend to do single digits. Part of this is probably because the competitive position is different. Despite location advantages, most malls and offices can be replicated, but it is harder to compete with an established brand like Cartier or the technology and commercial innovation expertise at work in Tencent.

In the last five years, there have been 29 new property listings, more than in any other sector. These have been driven by favourable valuations, but also by recent changes to regulation favouring listed property over unlisted property. Large new offices are under construction in Sandton, Gauteng, despite already-high vacancies, generally low levels of net space uptake and a trend towards more efficient use of space. In most industries, high levels of investment, coupled with more competition, equals lower returns for existing players. With capacity expanding ahead of demand growth, certainly one should expect lower growth in dividends for the next part of the industry cycle.

BUT RIGHT NOW , WE THINK INVESTORS ARE PAYING A PREMIUM FOR PROPERTY STOCKS THAT IS NOT JUSTIFIED BY THE FUNDAMENTAL PROSPECTS.

Lastly, re-valuation has added 6% to overall returns over the last 10 years, but this may not be the case over the next 10. Because interest rates are currently zero in many countries, investors are paying high prices for risky assets like shares, junk bonds, and property. This has benefited South African property companies, which are currently trading at record-high valuations.

The large South African property companies in the sector currently trade at a premium to the 10-year rolling bond yield which was previously only surpassed in 2007 during the last decade. Investors appear to be pricing in future growth which is higher relative to history and the risk is that growth disappoints.

Risks in the sector

One explanation for the sector's high valuation could be that investors see very low risk to current earnings. We think this view is optimistic.

Many companies use debt to boost their returns. There is nothing wrong with this, but the extent to which this happens in the property sector is somewhat disquieting. Some property companies have a debt balance that is seven times larger than annual income. To put this another way: if a company in such a position applied all its income to paying off debt – and paid no dividends – it would take seven years to pay off all the debt. The only other sector that is more geared than this is the banking sector. It is no coincidence that both sectors have long-term contracts with their clients and relatively stable income. But in times of stress, the large debt balances will become more prominent in investors' minds. Economically stressed tenants can't always meet their commitments nor easily renew leases. If debt holders suddenly required higher interest rates or safer covenants, equity holders would be in trouble. If property valuers became more conservative, the ratio of debt to property value would increase, and property companies would have to raise more money from shareholders. We saw this all happen to a dramatic extent in Australia in 2008.

Property companies do not account for the replacement cost of assets like other companies do: there is no depreciation charge on the income statement. In this respect, long-term earnings are overstated, and property companies normally need to issue debt or shares to be able to pay for capital expenditure. Take Growthpoint, the largest South African property stock, as a typical example. Table 1 shows some cash flow numbers for the share over the past decade.

It is clear that capital expenditure – some of which was for growth, and some of which was for replacing or upgrading old buildings – has been paid for by borrowing money and by issuing shares. It is striking that the company has raised R7bn more from shareholders than it has paid to shareholders. As a result, Growthpoint's shares in issue have increased by 14% per year over this period.

To a large extent, these shares have been issued to make acquisitions. And mostly, Growthpoint has bought companies trading on a higher dividend yield than itself – in other words, companies that the market has placed on a cheaper valuation than Growthpoint itself. This operation has the effect of boosting earnings per share even when there is no actual organic improvement. (Please refer to Simon Marais' article in Quarterly Commentary 2, 2000, for a fuller explanation of how this works.)

We believe Growthpoint has added real value by issuing all those shares in order to make acquisitions, however we don't think this is something it will be able to repeat given its current size.

Beware of paying a premium

With hindsight, there were times in the last 10 years when we should have been more positive about property. But right now, we think that investors are paying a premium multiple for property stocks that is not justified by the fundamental prospects.

The re-valuation tailwind is not likely to repeat, and may even reverse. Dividend growth has been boosted by acquisitions. We think the market does not fully appreciate all of the risks in the sector, especially the high level of gearing. Unlike in the late 1990s, when more than 20% of our clients' balanced portfolios was invested in property and the dividend yield on the property sector went as high as 23%, we continue to have an underweight position in the sector.

Jacques joined Allan Gray as an equity analyst in 2008 after working as a management consultant. He began managing a portion of the equity and balanced portfolios earmarked for associate portfolio managers in 2013 and was appointed as a portfolio manager in 2015. Jacques holds a Bachelor of Science degree in Mathematics from the University of Cape Town and is a CFA® charterholder.

Yusuf was employed at Allan Gray from 2013 to 2018 and was part of the investment team. Yusuf holds a BBusSc degree from UCT and is a qualified CA(SA).