In capitalism it is most often the case that competitive advantages do not last. One only needs to think about the ongoing competition between cellphone manufacturers to realise that good ideas rarely translate into long-term advantages. Exceptions to this rule make interesting subjects for analysis. Ruan Stander looks at well-managed direct insurance company OUTsurance, part of the Rand Merchant Insurance Holdings (RMI) Group, as a good example of a company enjoying multiple competitive advantages. Acquired at a reasonable price, shareholders should do well by owning companies such as OUTsurance.

Evidence for sustainable advantages requires a company that has:

One company that fits the profile is Coca-Cola. The company has been around for 126 years and has faced capitalism's creative destruction for long enough to be counted as a fair example. Table 1 illustrates how Coca-Cola has been able to generate value for shareholders over the short, medium and long term beyond the market average. If an investment in the market in 1919 was worth R1m today, an equal investment in Coca-Cola would be worth R37m.

Although the details around the success of Coca-Cola and an investment case for the company today are beyond the scope of this article, three similarities with OUTsurance stand out at a high level:

The third point is important since it is the 'moat' that turns 1) and 2) into a money-making machine for shareholders. For Coca-Cola the advantages are a bottling and distribution system that is hard to replicate and a recipe that is widely regarded as one of the best kept secrets in business. What is it that makes OUTsurance superior and hard to copy? Surely the policy documents are not a secret and it is easy to copy the OUTbonus? The advantage lies deeper than this and actually helps to keep costs lower than the scale economies alone are able to.

The insurance value chain is well known for being filled with vested interests that are hard to change once established. Some policyholders are happy to claim as much as they are allowed to; many panel beaters would like to charge as much as possible; and most salesmen are more interested in commission than the quality of the customer or the price being charged. It is hard to change the behaviour of participants once relationships are established, even if it is clear that a better alternative is available.

This allows a well-managed direct insurance company like OUTsurance to offer clients a lower rate than existing insurers can afford (because of cross subsidies to poor clients and panel beaters), while making a high margin in doing so. If the theory sounds too good to be true, the reader should find comfort that it is supported by evidence.

An early example of an insurance company which was able to achieve this is the State Farm Insurance Company. A small venture founded by a retired farmer in 1922 became the largest motor insurance company in the US in 1942 by avoiding the risks inherent in the insurance value chain. Unfortunately this company was never listed since it would have made for an interesting comparison with Coca-Cola. Other well-known examples include auto insurers GEICO and The Progressive Corporation in the US and Admiral in the UK. Regrettably, GEICO was de-listed when Berkshire Hathaway bought the company in 1996 and Admiral listed only in 2005. As an indication of the economics at work: shareholders in The Progressive Corporation have earned 17.4% p.a. since 1973, outperforming the US stock market by 7.4% p.a.

Graph 1 illustrates the extent to which OUTsurance has turned advantages into profitable growth for shareholders by showing annual growth in gross premiums. 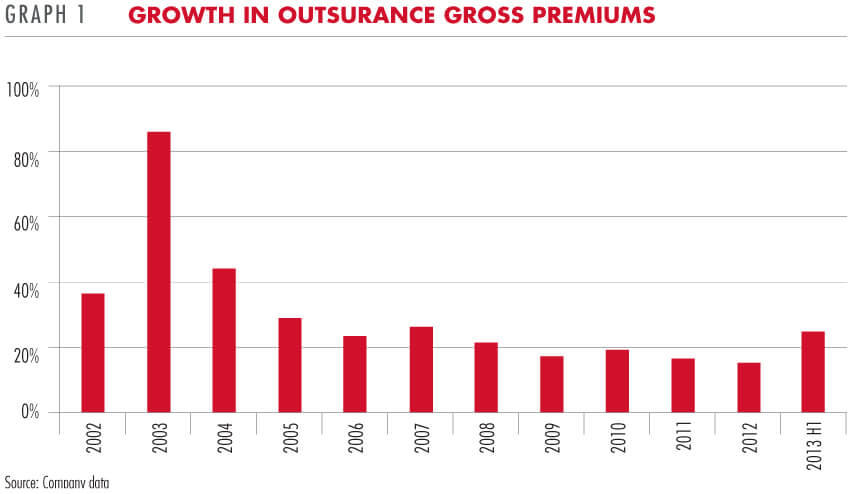 How long will it last?

Although one would not expect the rapid market share gains of the past to be repeated, an 11% market share in South Africa offers plenty of scope for further gains. There also seem to be attractive opportunities in other countries, with the Youi venture in Australia making positive noises.

The following bodes well for OUTsurance shareholders in terms of Youi:

One cannot underestimate the role that company management plays in the continued success of OUTsurance. Shareholders are fortunate to be invested alongside founders who boast one of the best track records in insurance history.

The RMI Group is a holding company with stakes in MMI, Discovery and OUTsurance. The market valuation of RMI implies a 12 price to earnings (PE) ratio for unlisted OUTsurance (excluding Youi start-up losses). This is a low price in absolute terms for a company that can grow at a high return on capital. It is very attractive compared to the FTSE/JSE All Share Index (ALSI), currently trading on a17 PE (20x bottom up normal earnings).

Ruan joined Allan Gray as an equity and quantitative analyst in 2008 and left the company in 2021. He began managing a portion of the equity and balanced portfolios earmarked for associate portfolio managers in 2013 and was appointed as portfolio manager in 2015. He also managed the optimal portfolios. Ruan holds a Bachelor of Science (Honours) degree in Actuarial Mathematics from the University of Pretoria. He is an FRM® and a qualified actuary.