Retirement reform: How will the changes affect you?

With a very small percentage of South Africans able to support themselves financially in retirement, Treasury has been taking a thorough look at retirement savings, trying to figure out how to manage this alarming problem. Several discussion documents have been released for comment, with a further paper made public alongside the 2013 Budget Speech. Through consultation and debate with various groups, including the financial services industry, Treasury hopes to introduce reforms that will help individuals make appropriate, sustainable long-term decisions.

While we do not think the retirement system is broken, most parties acknowledge that improvements are vital to nudge people in the right direction. Good progress is being made but this is a complicated process and it may be a while before far-reaching changes are implemented. Richard Carter takes a look at some of the changes that may affect you as a retirement fund investor.

There are numerous points of interest and importance in Treasury's proposals. As a retirement fund investor there are perhaps three areas that will affect you directly:
1. Plans to create alignment in the industry between the different retirement products
2. Access to your money (with a focus on preservation)
3. Default annuities at retirement

THE CHANGES WILL NOT LEAVE YOU ANY WORSE OFF THAN BEFORE

There are currently several different types of retirement savings products, with varying rules, particularly around preservation and accessing money. Treasury is aiming for fewer arrangements, with consistent treatment of active savings on the one hand, and preserved savings on the other. The devil is in the detail and achieving alignment across all product types will be tricky. Indeed, with retirement annuities there are still many areas that require further consultation and one set of rules may not be achievable.

At the same time as making these changes, Treasury acknowledges that it is crucial to protect vested interests and not penalise anyone already invested; the idea is to keep money in the system, not to chase it away. Those invested before the time of new regulations will not be bound to the changes and the changes will not apply to investors at or nearing retirement age. In other words, the changes will not leave you any worse off than before.

Treasury believes that the rules around accessing your retirement savings - both on leaving an employer and at retirement - should be standardised. The rules currently vary from product to product, as shown in Table 1. In addition, the rules should acknowledge that investors may need their money desperately at particular points in time and that it is not productive or acceptable to make funds completely inaccessible. Treasury wants the rules to encourage people to take out less and to preserve more. Getting the balance right is like walking a tightrope. 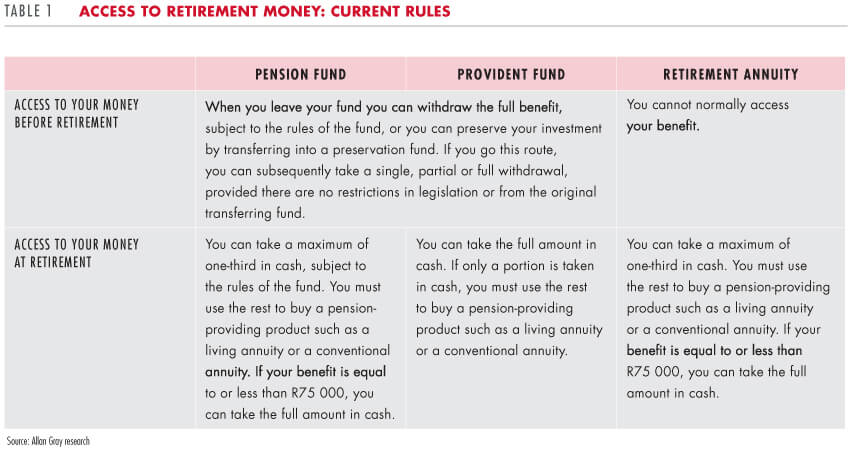 After the proposals take effect, when you leave a pension or provident fund before retirement, instead of having access to all the cash, as you do currently, the fund will be required to put your money into a preservation fund automatically. The rules applying to preservation funds will be changed - rather than the existing once-off access to your money, one withdrawal per year will be allowed, but that withdrawal will be limited to a much smaller amount. You will be able to carry unused withdrawals forward to future years.

The treatment of your money when you leave a fund, both before and at retirement, will be the same for pension and provident funds and so the distinction between these products will ultimately fall away.

Another hot topic is that of default annuities. Treasury is concerned about the lack of assistance and advice given to retirement fund members reaching retirement. In its mind, too many retirees choose inappropriate products and are unable to support themselves adequately. The decisions they make often fail to account for the rise in the cost of living and the possibility that they will live for a long time. While we contend that the root cause of this is people reaching retirement with insufficient savings, there is no doubt that many retirees choose higher income in the early years of retirement at the expense of the later years when they will become dependent on family or the state.

Treasury's proposals involve introducing default annuities. The responsibility would lie with the trustees to identify a suitable annuity option for members, one that passes certain tests on fees and design. Living annuities will be eligible for selection as long as they pass these tests. To increase competition, providers other than registered life insurers will be able to sell living annuities. There are also proposals that will make it easier for individuals to purchase combinations of conventional annuities and living annuities to suit their preferences.

IF YOU ARE STILL WORKING TOWARDS RETIREMENT, KEEP PUTTING YOUR MONEY ASIDE. THIS WILL HELP YOU TO ACHIEVE FINANCIAL INDEPENDENCE WHEN YOU RETIRE

We think there is certainly logic in a default annuity option, but members would do well to remember it is not necessarily a 'one size fits all game' and what is suitable for one member may not suit another. We do not believe the outcomes will improve significantly until people start retiring with significantly more savings. This is the key piece that needs to be addressed. Where the proposals do ring true is that they endorse long-term thinking and will certainly get people thinking about their options.

There are several other proposals on the table, some of which will be more easily actioned than others. A few changes are already being pushed through, such as positive changes on the tax front for the average person (see text box).

Take charge of your own savings

Treasury wants us to save for retirement and to take less out along the way. This will ultimately lead to South Africans accumulating more retirement savings and thus enable smarter long-term choices when we retire.

These are sensible goals. While you may not be able to write the rules for the country's savings, you can certainly take charge of your own. If you are still working towards retirement, keep putting your money aside. This will help you to achieve financial independence when you retire. If you leave your retirement fund, do your best to preserve as much of your built up savings as you can. And when you retire, remember that your savings may have to last for many more years than you expect, so you need to plan accordingly.

According to the proposals, from or after 2015, employer contributions to retirement funds will become a fringe benefit in
the hands of the employee for tax purposes. Individuals will be able to receive a tax deduction on employer and employee
contributions to a retirement fund of up to 27.5% of the greater of remuneration or taxable income. A ceiling of R350 000
will apply.

Retirement annuities (RAs) are currently restricted to a 15% tax deduction, so this change will allow those investors whose main
retirement savings are in an RA to save more.

Richard joined Allan Gray in 2007. He is head of Assurance and is responsible for Compliance, Risk, Internal Audit and Group Legal. He is also a director of Allan Gray Life and Allan Gray Investment Services. He was previously jointly responsible for the Retail business, heading up Product Development. Richard holds a Bachelor of Business Science degree in Actuarial Science from the University of Cape Town and is a qualified actuary.

The finer detail may remain unclear for the moment, but National Treasury&rsquo;s proposed retirement reforms have largely been welcomed by the retirement savings...

Great news for retirement savers as offshore limits increased to 45%

Following announcements in the recent Budget speech, the South African Reserve Bank (SARB) has confirmed that the offshore investment limits for all investme...

Could you survive on less than a third of your income in retirement?

Despite taking steps to save, millions of South Africans are at risk of having to make significant lifestyle-related downgrades when they are no longer...

How to make investing for retirement feel less like a sacrifice

With all the financial demands of present-day life, it can be difficult to stay focused on investing for our longer-term financial goals. Balancing the...