Tales of rice and rewards

We often talk about the value of time in investing, but it is difficult to really get to grips with the rewards that can be reaped through compound growth: earning interest today on interest earned yesterday and so forth. The power of exponential growth is neatly demonstrated by the rice and chessboard story, the earliest record of which is in an epic poem written in Persia about 1 000 years ago.

The story goes that a king in India was so impressed by the new game of chess that he offered the wise sage who invented it any gift of his choosing. The sage modestly asked to be paid in grains of rice: the king was to put a single grain of rice on the first chess square and double it on every subsequent square.

The king readily agreed and ordered a bag of rice to be brought to the chessboard. He then started placing rice grains according to the arrangement: one grain on the first square, two on the second, four on the third, eight on the fourth, and so on. Following the exponential growth of the rice payment, the king soon realised that he would be unable to fulfil his promise. On the 20th square he would have had to put 220 or just over 1 000 000 grains of rice. With 264 grains and 48 grains per gram of rice, the king would have had to put more than 380 billion tons on the last square. That is 500 times this year’s global rice production forecast.

How is a fable about exponential mathematical series relevant to investing?

Graph 1 illustrates two investment strategies. Investor 1 began investing R1 000 a month in the year 2000 into a balanced fund. He contributed monthly until the end of 2004, a total of 60 contributions or R60 000, at which stage he stopped contributing, but left his money invested until the end of 2014. 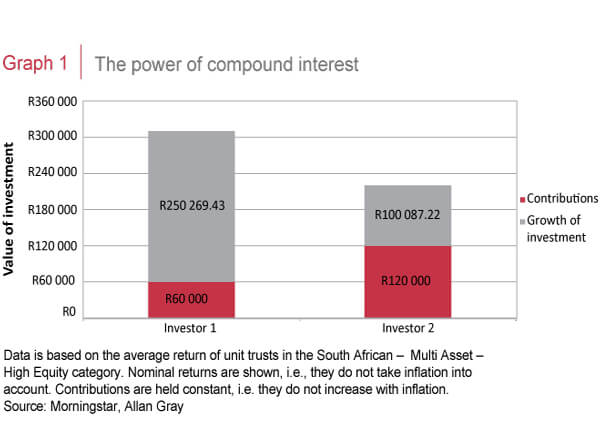 Investor 2 began contributing R1 000 per month from the beginning of 2005 into the same balanced fund, and continued to contribute until the end of 2014. A total of 120 contributions, double the capital contribution of investor 1.

Graph 1 shows that although investor 1 contributed 50% less than investor 2, his investment is worth a significant 40% more. On top of this, less than a quarter of the final amount has come from his pocket. The rest is from investment returns and compound interest.

How does this work?

Similar to the rice story, as your investment begins to earn returns, the base from which it will earn future returns grows exponentially. Although investor 1 contributed less money, he had already accumulated a fair amount by the time investor 2 started to invest. This is illustrated in Graph 2, which uses the same data as Graph 1, but shows the market growth of the investments. 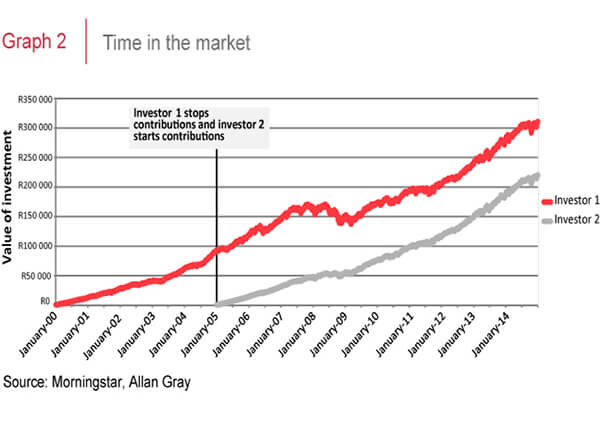 Is now the right time to invest?

The rand is currently weaker than it has been for some time, and there are crises unfolding in different corners of the globe. At the same time, local equities are, on the whole, looking expensive. Investors are understandably confused about where to put their money, and are asking ‘when is the right time to invest?’

In the absence of a crystal ball, it is impossible to accurately predict what will happen next on the markets; we simply do not know. We do know that if we look back over time, clients who have started early and left their investments to grow, have performed better than those who kept putting off investing, hoping that market conditions would improve.

If you are concerned about equity valuations, or feel you need to diversify asset classes but don’t know how to do it, you may wish to consider a solution unit trust, such as a balanced fund. In a balanced fund you hand over the asset allocation and timing decisions to an experienced fund manager, who makes the decisions for you.

For most of us, procrastination is the enemy. Market ups and downs tend to smooth out over time, rewarding long-term investors. Time in the market is critical if you truly want to benefit from the wonders of compounding.

If the Persian poet who penned that story had invested the price of a scraggly goat (say US$10 in today’s money) at a real return of 3%, leaving the proceeds to the Persian (now Iranian) people, and found a way to stay invested through the 1 000 years since then, his legacy would be equal to about 250 times Iran’s current GDP.

Allan Gray Unit Trust Management (RF) Proprietary Limited (the ‘Management Company’) is registered as a management company under the Collective Investment Schemes Control Act 45 of 2002. Allan Gray Proprietary Limited (the ‘Investment Manager’), an authorised financial services provider, is the appointed investment manager of the Management Company and is a member of the Association for Savings & Investment South Africa (ASISA). Collective Investment Schemes in Securities (unit trusts or funds) are generally medium- to long-term investments. Except for the Allan Gray Money Market Fund, where the Investment Manager aims to maintain a constant unit price, the value of units may go down as well as up. Past performance is not necessarily a guide to future performance. The Management Company does not provide any guarantee regarding the capital or the performance of its unit trusts. Funds may be closed to new investments at any time in order for them to be managed according to their mandates. Unit trusts are traded at ruling prices and can engage in borrowing and scrip lending. Performance figures are for lump sum investments with income distributions reinvested. Actual investor performance may differ as a result of the investment date, the date of reinvestment and dividend withholding tax.

Jeanette was employed at Allan Gray from 2009 to 2017 and was jointly responsible for the Retail business, specifically heading up Distribution and Client Service. She was also a director of Allan Gray Investment Services and Allan Gray Unit Trust Management. Jeanette holds a Bachelor of Science degree from the University of the Free State and a Master of Business Administration (with Honours) from the Institute for Management Development. She has spent her career in the financial services industry assuming various senior positions.