Facing the facts around retrenchment

With the latest GDP growth figures showing that the economy contracted 0.6% in the third quarter, SAA heading into business rescue, and the problems at Eskom persisting, it looks like we are in for a difficult year ahead. This suggests that the prospect of retrenchment is a very real threat for many South Africans. Carrie Norden looks at how you can prepare for this scary scenario.

The dismal savings rate in our country reveals that, on average, we survive on a “pay-cheque-to-pay-cheque” basis. According to the South African Reserve Bank (SARB), the household savings rate, which was around 5.9% of GDP per year in the 1970s, dropped to 1.6% in the 1990s and is now shockingly low at just above 0%. This is not surprising when you consider the employment environment: Figures published by Statistics South Africa indicate that the narrow unemployment rate, which counts people who are unemployed and actively seeking work, stood at 29% at the end of the second quarter of 2019. If you include people who are unemployed but not actively seeking work, this figure rises to 38.5% (as at the end of June 2019).

These numbers drive home the scale of the problem faced by anyone looking for work and we need to have a back-up plan in case the worst happens.

How to be prepared for the worst-case scenario

Many of us prefer to bury our heads in the sand rather than face our fears and equip ourselves to deal with them. But taking positive steps can help us be prepared for and cope with difficult scenarios. Writing in Psychology Today, author Bill Knaus recommends the following approach to combat “Ostrich syndrome”:

Knaus notes that awareness is one of two major parts of this change process. Purposeful action is the other. In our scenario, living with the fear of retrenchment is part of our realities. Facing up to this possibility and taking steps to become more financially resilient is key.

The recommended first step in personal financial planning is to start saving some money to build a fund that can cover unexpected financial emergencies, including retrenchment. As a general rule of thumb, you should aim to save enough to cover your living expenses for at least three months. It takes most people quite some time to accumulate this amount, but by contributing regularly it can be achieved. This money should be invested in a low risk, easy-to-access investment, such as a money market fund, that can earn returns but is not impacted by market volatility.

It’s also a good idea to find out what benefits, if any, would come your way in the event of retrenchment. You can then talk to an independent financial adviser about your options. It is hard to think rationally in the eye of a stressful storm; being equipped with information ahead of time will allow you to make better-considered decisions.

If you lose your job, you may be eligible to receive lump sum benefits from your employer and/or your retirement fund. These benefits may qualify for special tax treatment.

A “severance benefit” is defined in the Income Tax Act (“the Act”). It is a cash payment from an employer to an employee on the loss or termination of their employment. It is important to note that this is not the same as a lump sum payment from a retirement fund on retrenchment (what we refer to as a “retrenchment benefit”, but which is defined as a “retirement fund lump sum benefit” in the Act).

A lump sum cash payment from your employer on the termination of your employment may be regarded as a severance benefit for tax purposes, provided one of the following conditions are met:

A lump sum from a retirement fund may be regarded as a retrenchment benefit if it is received due to the termination or loss of your employment as a result of one of the following reasons:

If you held more than 5% of the issued shares or member’s interests in the employer company at any point in time, neither a severance nor retrenchment benefit will qualify for special tax treatment.

If one of the above-mentioned requirements are met, your lump sum benefit will be classified as either a severance benefit or a retrenchment benefit (retirement fund lump sum benefit) in terms of the Act.

The preferential tax treatment is that the qualifying lump sums will be taxed according to the retirement lump sum tax table (see Table 1). This means that the first R500 000 is taxed at 0%, but this is a lifetime limit and does not apply separately per lump sum. It is important to note, when calculating the tax liability on a cash lump sum, the South African Revenue Service (SARS) takes all previous taxable withdrawal, retirement (including retrenchment benefits) and severance benefits you have received into account. This includes severance benefits that accrued on or after 1 March 2011, and retirement lump sum benefits (including retrenchment benefits) that accrued on or after 1 October 2007. 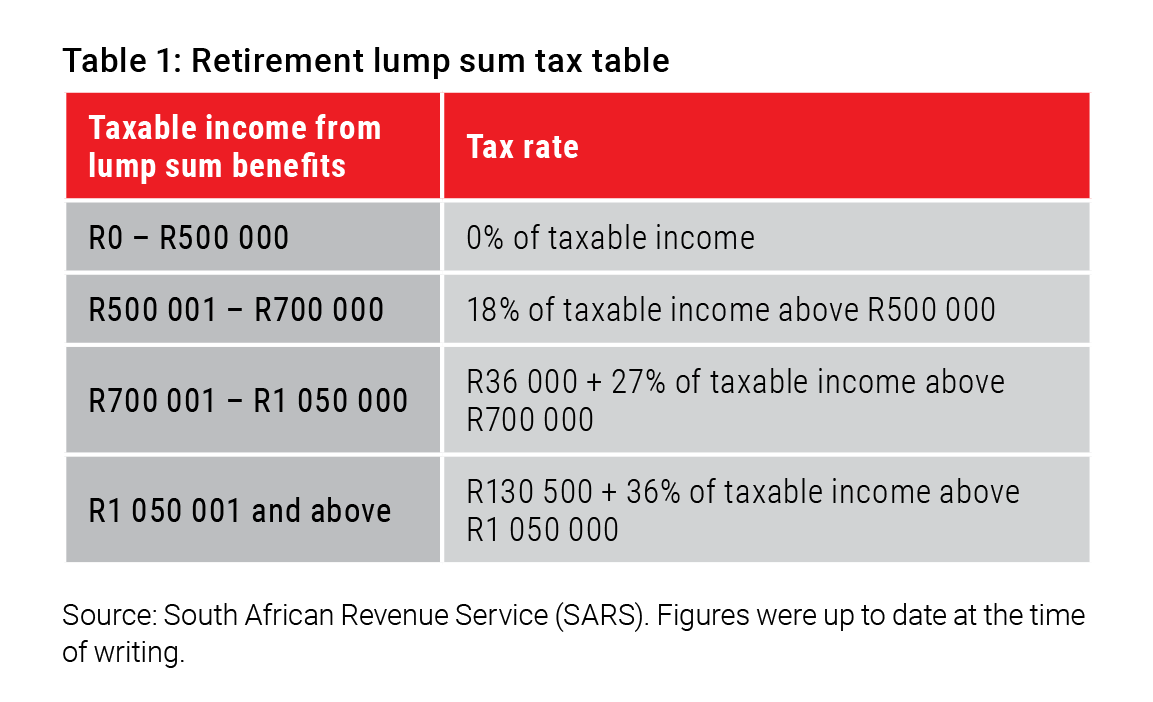 If none of the requirements for classification as either a severance or retrenchment benefit are met, or if you held more than 5% of the issued shares or member’s interests in your employer company at any time, the tax treatment of the lump sum is as follows: 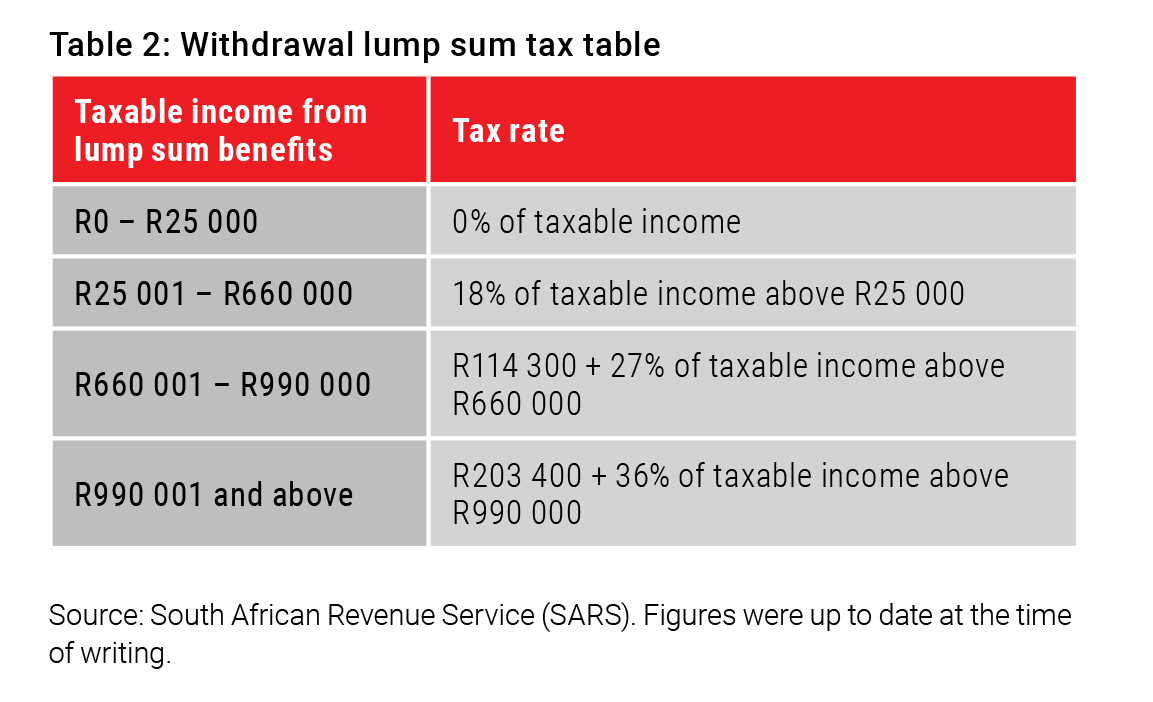 Think twice before cashing in your retirement nest egg

While cashing in your retirement savings may seem like the solution, it should be the very last resort as this will set you back more than you think. Not only will you have to start again, you will also miss out on the full power of compounding. If your circumstances allow, rather transfer your savings into a preservation fund or a retirement annuity fund. A preservation fund is specifically designed to invest your pension or provident fund savings, and as long as you have not already made a withdrawal, it allows you a once-off chance to access your funds in future. A retirement annuity allows you to invest your current retirement fund savings and to continue to save.

If you get a severance benefit payment from your employer and don’t need to use the money immediately, consider investing it in a unit trust or tax-free investment or add it to your emergency fund.

Not spending retrenchment benefits is very tough if you have no other recourse. This is why an emergency fund is so important. You may also be able to claim from the Unemployment Insurance Fund (UIF). While UIF benefits are capped and may not cover all your expenses, every bit counts in a time of crisis.

As always, it is best to consult with an independent financial adviser on the best solution for your circumstances.