Finance Minister Enoch Godongwana delivered his maiden Budget speech on Wednesday, 23 February. He noted that although the easing of COVID-19-related restrictions supported a return to economic growth in 2021, the country is still under financial pressure and dealing with the effects of the pandemic, rising inflation, increased fuel prices and a series of interest rate increases. The Minister acknowledged that now is therefore not the time to increase taxes, which would put the economic recovery at risk. The theme of this year’s Budget is “keeping money in the pockets of South Africans”.

Gross tax revenue for 2021/2022 is expected to be R181.9 billion higher than projections in the 2021 Budget and R61.7 billion higher than projected in the 2021 Medium-Term Budget Policy Statement. Corporate income tax collections from mining account for most of this surplus, with personal income tax collections and VAT also performing above expectations. For the past two years, the focus has been on broadening the tax base, improving administration, and lowering tax rates. Government intends to continue with this approach while avoiding tax rate increases as far as possible. Implementation of structural reforms will contribute to economic recovery and improved tax collection.

Due to the revenue improvement, government proposes R5.2 billion in tax relief to help support the economic recovery and to provide some respite to South Africans.

There is also a continued focus on rebuilding the South African Revenue Service (SARS). Over the past year, SARS has recruited additional staff and invested significantly in modernising its systems and infrastructure, which has resulted in improved revenue collection and tax compliance. A dedicated new unit focused on high-wealth individuals is also in progress.

Below we highlight some of the 2022 Budget tax proposals that may impact investors. These changes come into effect on 1 March 2022, unless otherwise indicated.

What were the highlights?

The key take-outs from this year’s Budget are summarised below:

The following applies for the period from 1 March 2022 to 28 February 2023, unless otherwise stated:

Personal income tax brackets will be adjusted in line with the expected inflation rate of 4.5% for the 2022/2023 tax year. This relief will mainly impact individuals in the middle-income group.

This means that taxpayers earning above R226 000 will fall into the 26% tax bracket. The highest marginal tax rate for individual taxpayers remains unchanged at 45%. The personal income tax rates for the 2022/2023 tax year are listed below. 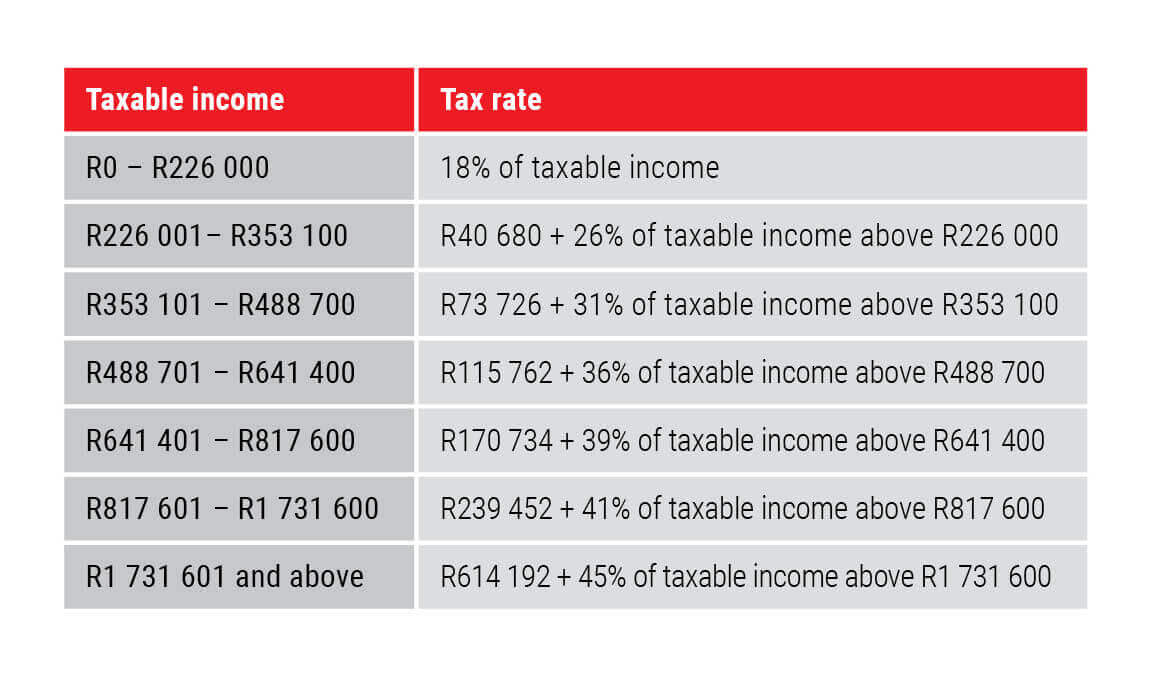 The tax-free thresholds for personal income taxes will also increase in line with the 4.5% expected inflation rate for the 2022/2023 financial year to the following:

The primary, secondary and tertiary rebates (deductible from tax payable) will increase to the following:

Monthly tax credits for medical scheme contributions will increase to the following:

The corporate income tax rate will reduce from 28% to 27% for years of assessment ending on or after 31 March 2023.

The income tax rates for trusts (other than special trusts) remains unchanged at 45%.

Dividends tax remains at 20% on dividends paid by resident and non-resident companies for shares listed on the JSE.

The annual cap on contributions to tax-free savings accounts remains at R36 000 from 1 March 2022, with the lifetime limit also remaining at R500 000.

Additional tax proposals for the 2022 legislative cycle and beyond

Last year’s Budget announced proposed changes to impose a withdrawal tax and interest charge, with effect from 1 March 2022, when a member of a retirement fund ceases to be a South African tax resident. These changes were withdrawn from the 2021 legislative cycle, following concerns raised during public consultation on the 2021 Tax Bills. In order to address the complexities raised through the comment cycle, including the concern that the amendment would result in double-tax treaty override, government will start the process of renegotiating the affected tax treaties to ensure that South Africa retains taxing rights on payments from local retirement funds. Government intends to start these negotiations this year.

Proposals are being worked on to allow members access to one-third of their retirement fund savings before retirement while the remaining two-thirds will need to be preserved for retirement. Public comments on the tax treatment of contributions to the two pots are being reviewed in preparation for public workshops, to be followed by legislative amendments.

Provisional taxpayers with assets above R50 million will be required to declare specified assets and liabilities at market value in their 2023 tax returns to assist with the detection of non-compliance and fraud. The additional information will assist in determining the levels and structure of wealth as recommended by the Davis Tax Committee.

Government proposes a review of the provisional tax system in line with international developments and intends to publish a discussion paper in this regard.