Finance Minister Tito Mboweni delivered his maiden budget speech on Wednesday 20 February. In this document we highlight some of the 2019 Budget tax proposals that may impact investors. These changes come into effect on 1 March 2019.

No surprise tax increases in the Budget

This year’s Budget announced no surprise tax increases, unlike last year’s 1% VAT hike. Instead, the focus shifted from revenue collection to restoring the public’s confidence in the credibility of the revenue collector by prioritising the appointment of a permanent Commissioner in the coming weeks; reinstating the SARS Large Business Unit; and increasing the efficiency of tax collections by focusing on enforcement and embracing new technology. To limit the negative impact on economic growth, the 2019 Budget proposals will not increase tax rates in any category. Instead, revenue collections will be increased by not adjusting the income tax brackets for inflation. This is commonly referred to as ‘bracket creep’ and is an effective way to raise revenue as the impact on household income is not immediately evident to the public.

What were the key changes?

The highlights from this year’s Budget are summarised below:

There has been a slight upward adjustment of the tax-free thresholds for personal income taxes to the following:

The primary, secondary and tertiary rebates (deductible from tax payable) were slightly increased to the following:

What has not changed? 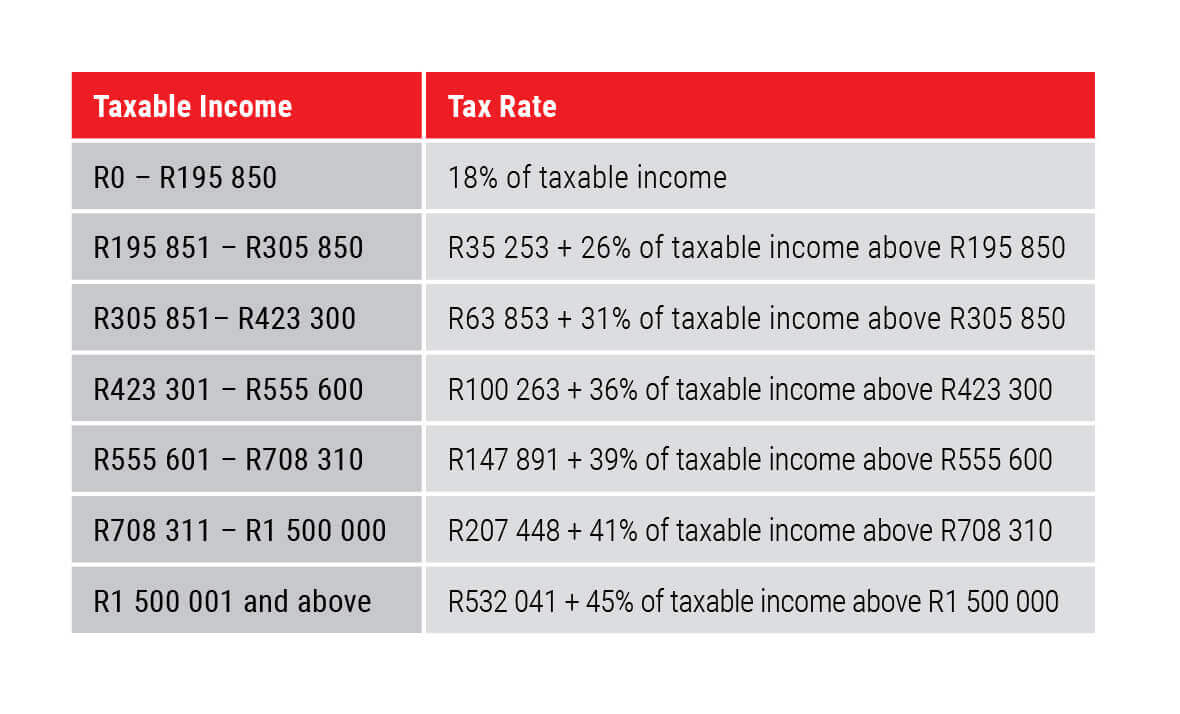 The income tax rates for companies and trusts (other than special trusts) remain unchanged at 28% and 45%, respectively.

Dividends tax remains at 20% on dividends paid by resident and non- resident companies in respect of shares listed on the JSE.

The annual cap on contributions to tax-free savings accounts remains at R33 000 with a lifetime limit of R500 000.

From 1 March 2020, South African residents who spend more than 183 days in employment outside the country will be subject to South African taxation on any foreign employment income that exceeds R1 million. To prevent monthly withholding of income tax both in South Africa and the host country, it is proposed that South African employers be allowed to reduce their monthly local pay-as-you-earn (PAYE) withholding by the amount of foreign taxes withheld on the employment income. Before implementation, a workshop will be held to consult taxpayers on their administrative concerns. Any resulting amendments will be processed during the 2019 legislative cycle.

Once a member of a retirement fund retires and receives an annuity as a retirement benefit, any contributions to the retirement fund that did not qualify for a deduction when determining the member’s taxable income are tax-exempt. This exemption does not apply to annuities received from a provident or provident preservation fund.

To encourage annuitisation (regular payments in retirement), it is proposed that this exemption be extended to provident and provident preservation fund members who receive annuities. The exemption would apply for contributions made after 1 March 2016.

In 2018, amendments were proposed in the Taxation Laws Amendment Bill to tax the profits of some collective investment schemes as revenue instead of capital. After reviewing the public comments on this draft, government decided that more time is needed for it to work with industry to find solutions that will not negatively affect the relevant groups. This study is proposed for the 2019 legislative cycle.

Carla joined Allan Gray as an offshore accountant in 2006 and is currently the lead of the Tax team. She has an Honours degree in Management Accounting, a Higher Diploma in Tax Law and a Postgraduate Diploma in Financial Planning, all from Stellenbosch University.