The Minister of Finance announced amendments to tax and other legislation that may affect investors. These changes come into effect on 1 March 2018, unless otherwise indicated.

There were no adjustments to the top four income tax brackets and below inflation adjustments to the bottom three brackets. Taxpayers earning above R195 850 will now fall into the 26% tax bracket. The highest marginal tax rate for individual taxpayers remains unchanged at 45%. The personal income tax rates for the 2018/2019 tax year are listed below. 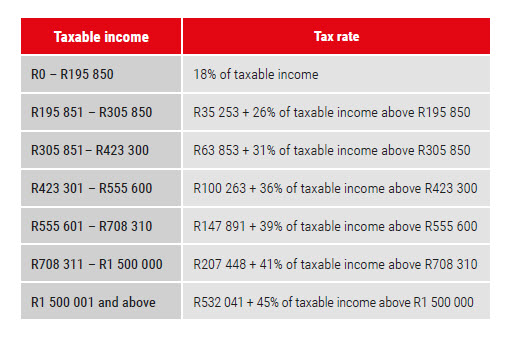 The income tax rate for companies remains unchanged at 28% and at 45% for trusts (other than special trusts).

Tax thresholds have increased to:

The primary, secondary and tertiary rebates (deductible from tax payable) were partially adjusted for inflation and have been increased to:

Below-inflation increases in medical tax credits will help government to fund the implementation of National Health Insurance. Monthly tax credits for medical scheme contributions will therefore only increase as follows:

Interest withholding tax remains 15% on interest from a South African source payable to non-residents. Interest is exempt if payable by any sphere of the South African government, a bank or if the debt is listed on a recognised exchange.

The annual cap on contributions to tax-free savings accounts remains at R33 000 with a life-time limit of R500 000.

The annual exclusion for a capital gain or loss granted to individuals and special trusts remains at R40 000.

VAT increases from 14% to 15% from 1 April 2018 on the supply of goods and services provided by registered vendors.

Estate duty is levied on property of residents and South African property of non-residents less allowable deductions. In line with the Davis Tax Committee recommendations and in keeping with the progressive structure of the tax system, estate duty has increased to 25%. The tax is levied on the dutiable value of an estate at a rate of 20% on the first R30 million and at a rate of 25% above R30 million.