The case for active management

It is popular these days to talk about how difﬁcult the past several years have been for active managers. In a sense, however, active management is always difﬁcult because it is a zero-sum game. For one manager to outperform, another has to under perform. As the Nobel laureate William Sharpe demonstrated succinctly many years ago, both active and passive investors must, on average, have the same return before fees, which must also equate to the same return as the market overall. Layer on higher fees, tax inefﬁciencies and misguided investor behaviour (e.g. buying and selling at the wrong time), and the realised performance difference between the average active manager and a passive alternative can be very meaningful. Matt Adams and Adam Karr, from our offshore partner Orbis, argue the case for active management, despite the current challenges.

The past five years have been unusually difficult for certain active managers, particularly valuation-conscious managers such as Orbis. Unsurprisingly, the chorus proclaiming the death of active management has grown louder, and this is reflected in the flow of assets from active funds to passive strategies such as index funds or index-tracking exchange-traded funds (ETFs). Since 2009, nearly US$1.4 trillion has flowed from active equity funds globally, while more than US$800 billion has flowed to passive funds. Much of this movement has occurred in the past four years, as shown in Graph 1. 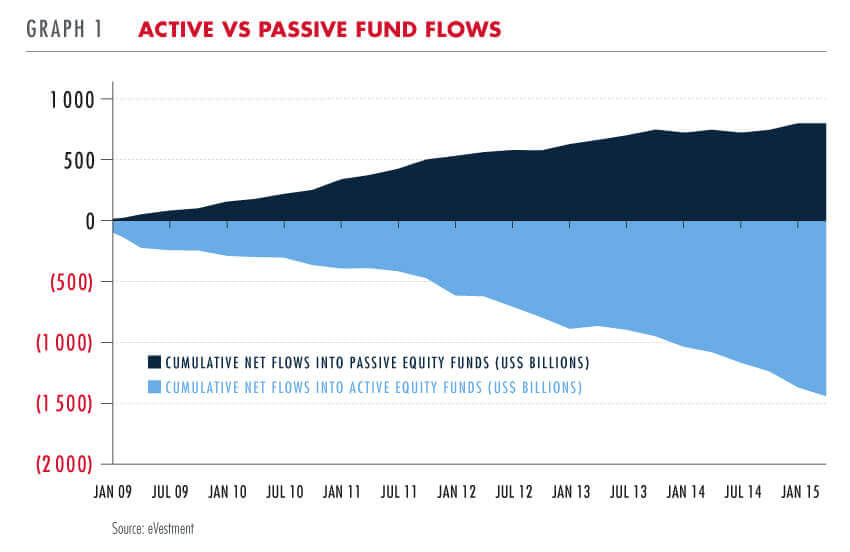 An important reality, sometimes lost in the discussion of the zero-sum arithmetic and headline-grabbing fund flows, is that there is a wide distribution of managers, some of whom will outperform and some of whom will not. The fact that active management cannot add value 'on average' does not prove that some skilled managers cannot do so over time. It will come as no surprise to longstanding investors with Orbis that we firmly believe stock picking can add value. Our objective, therefore, is not to argue the 'active versus passive' debate, but rather to offer our perspective as practitioners. One of the most relevant questions today, in our view, is whether the headwinds faced by active managers have been the result of cyclical or secular factors.

The argument for a secular decline is generally based on the view that competition is getting steadily more intense as the number of active funds grows, managers within the industry consistently improve their capabilities, and retail investors, a traditional source of outperformance for active managers, increasingly give up on picking stocks and move to passive alternatives. The consequence of these trends, critics contend, is declining active manager performance and less divergence between active managers.

While we don't disagree that competition is probably becoming more intense - what industry is not becoming more competitive? We think such arguments greatly overstate the case for structural change. Imagine a stock market in which every stock moves exactly in unison. By definition, every active manager would achieve the market return, and, after fees, would destroy value. In contrast, imagine a market where the range of returns between winners and losers is very wide. While the average manager is still doomed to underperform after fees, such an environment at least offers the possibility that a skilled active manager can add value by owning the winners and avoiding the losers. The point we are seeking to illustrate is that the dispersion of returns offered in the market is an important determinant of the possibility for a skilled active manager to add value.

Our own experience is supportive of the important relationship between the opportunity set offered in the market through the dispersion of stock returns and the ability to add value through stock-picking skill. Graph 2 shows that over the past 25 years, our flagship Orbis Global Equity Fund has outperformed (net of fees) 63% of the time during quarters of above average dispersion and achieved an average quarterly relative return of 2.5%. In contrast, during quarters of below-average dispersion, the strategy outperformed just 42% of the time and achieved an average relative return of 0.1%. 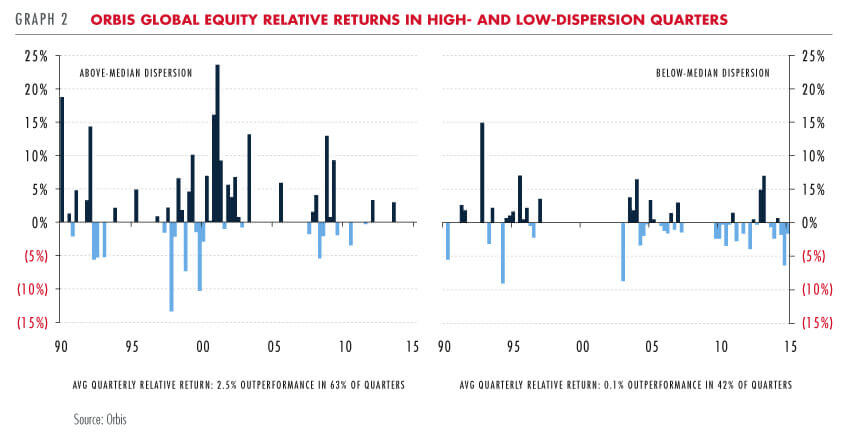 In this regard, the past five years have been unusual, with the dispersion of market returns well below the historical median. In fact, there have only been two quarters during which dispersion has been above the historical median! From this perspective, our stock‑picking performance over the period is very consistent with our history. The question, then, is to what extent the low dispersion over the period is itself cyclical or secular. We can think of two possible reasons that it could be structural, but don't see evidence to support either.

The first possibility is that the investment universe itself has changed such that fundamental business performance has become more homogeneous, resulting in less stock return divergence. A potential explanation for such a convergence of fundamentals might be that better corporate management and governance has left 'fewer mutts in the kennel,' so to speak, making it harder to outperform by simply avoiding the worst companies. If this were true, it should be reflected in a declining dispersion of fundamental performance, with the worst companies in particular showing the most improvement. As shown in Graph 3 however, the opposite is actually true - the divergence of fundamentals appears to be widening! 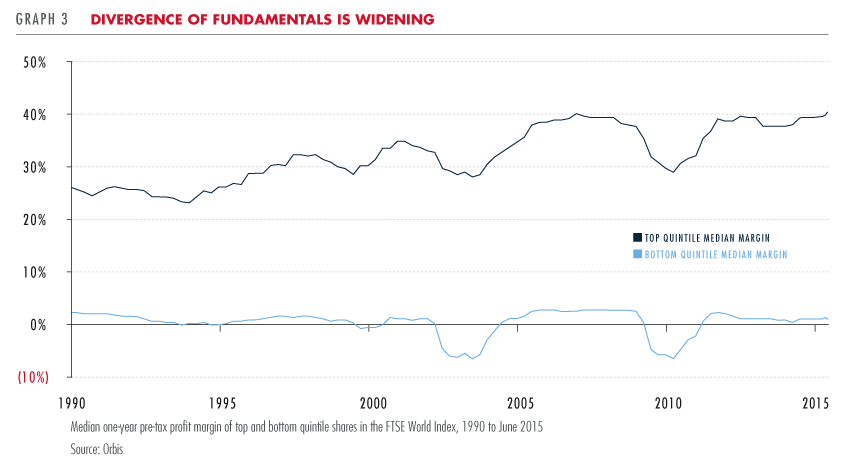 A second possible reason that low dispersion could be structural is that the market has become more efficient, resulting in fewer mispriced stocks. While we have no desire to step into the general debate about market efficiency, what we can say is that although dispersion does not imply mispricings, the two variables are probably correlated. Thus, the tendency of return dispersion to stay relatively flat over the long term is more consistent with the conclusion that efficiency is not increasing than if the dispersion trend were sharply downward. What we observe very clearly, however, is that return dispersion is cyclical and that the current stretch has been unusually long (see Graph 4). 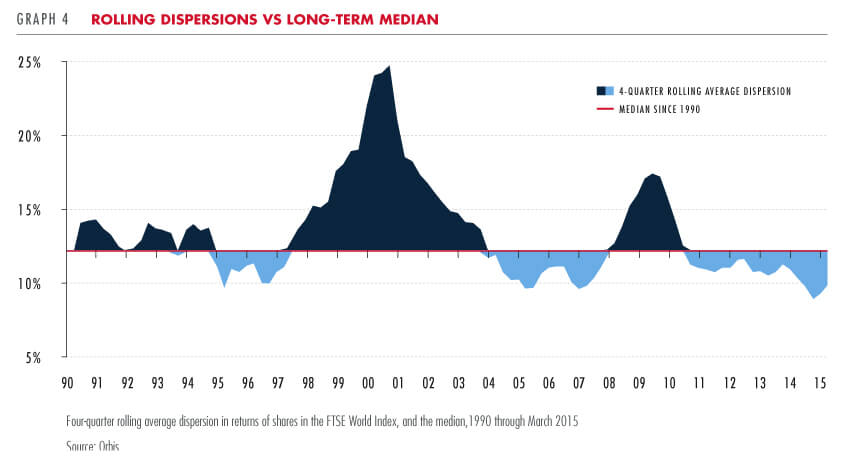 Indeed, the current period of low dispersion is most notable not for its depth but for its duration. There have been other extended periods of low dispersion since the Orbis Global Equity strategy's inception, such as the mid-1990s during the run-up to the tech bubble, as well as the mid-2000s, but none have lasted as long as the current period. This painfully long episode of sustained low dispersion has, in the classic pattern of herds, led many to conclude that the environment has fundamentally changed and that attempting to achieve an above average return by actively picking stocks has become a fool's errand.

We think, however, that the primary culprit is not a structural change in the market but rather the massive quantitative easing across much of the developed market, which has pushed up the prices of all assets, irrespective of their intrinsic values. In this sense, low dispersion is a close cousin of the 'trending' phenomenon that we wrote about last quarter.

The flood of money into passive strategies in recent years, without regard for the investment merits or valuations of individual stocks, has also caused shares to increasingly move together. This, in turn, fuels even more benchmark-hugging behaviour by active managers who are fearful of being left behind. While each of these phenomena would have been difficult independently, the combination of low dispersion and high trending has conspired to create a particularly challenging environment for value oriented managers like Orbis.

While we can't predict when radical monetary policy in the developed markets will end, or when the flows into passive investments will slow, we remain confident that neither will continue forever. When they do end, we believe that individual company fundamentals will once again play a more prominent role. In fact, it may be the case that merely the anticipation of a more 'normal' policy environment will be enough to change the current trends. In this regard, we may be seeing the early green shoots of a new spring, with dispersion year-to-date rebounding from the 2014 trough. Time will tell whether this was a true turning point or simply short-term noise. Either way, we will continue to focus our efforts on finding shares that are priced at a meaningful discount to our assessment of intrinsic value in the belief that this is ultimately the best way to create value on your behalf over the long term.

Adam joined Orbis in 2002 and is Orbis’ President and head of the Investment teams. He is one of the portfolio managers who direct client capital in the Orbis Global Equity Strategy. He is a director of Orbis Holdings Limited and Orbis Allan Gray Limited. Adam holds a Bachelor of Arts degree in Economics from Northwestern University and a Master of Business Administration from Harvard University. He is also a trustee at Northwestern University and the founder and chair of SEO Scholars San Francisco.

Turbulence. It&rsquo;s a word that can strike fear into the heart of even the most seasoned air traveller and even a little of it has been known to put people off...

Bonds are typically included in an investment portfolio to provide diversification and deliver yield. Developed market bonds are currently offering much lowe...