Tech stocks: Is history repeating itself?

From a top-down perspective, the prolonged outperformance of certain technology-focused companies has begun to raise eyebrows among those of us with first-hand experience of the inflation, and subsequent bursting, of the dotcom bubble. From the Nasdaq Composite’s peak in March 2000, it took 15 years for its price to exceed that level again. Not only is that an object lesson in one of the dangers of a passive investing strategy, but with the index now standing some 20% higher than that previous peak, it also raises the question of whether today’s investors should be worried about history repeating. Ben Preston, from our offshore partner Orbis, investigates.

To cut through the suspense, let me admit up front that I’m not going to answer the question directly: we don’t find it productive to spend a lot of time analysing benchmark indices. But to leap ahead to my conclusion, what has come as a surprise — probably just as much to us as to those who are familiar with our investment approach — is the number of attractive investment opportunities we’ve found even among the group of strongly performing tech-focused companies. As a contrarian, it feels strange to be enthusiastic about stocks that have been rising (see Graph 1). Then again, if being contrarian means behaving rationally even when it’s uncomfortable, then buying tech shares after a Nasdaq boom that ended so badly last time may be as good an example as any. 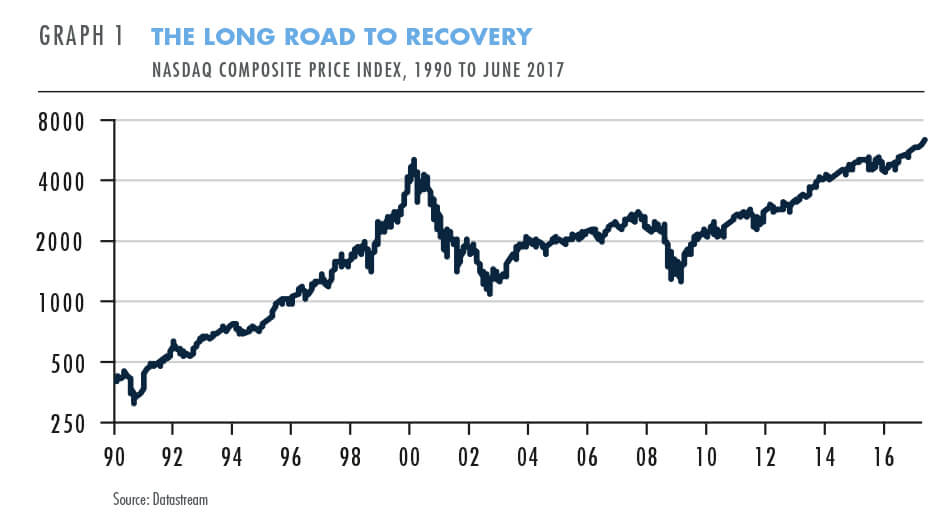 One clear difference between today’s largest tech stocks and those in the dotcom era is the price investors are willing to pay. As shown in Table 1, headline valuation multiples are about a third as much today. While there’s only so much comfort that can be gained by a favourable comparison with the top of a bubble, it does at least indicate the difference in sentiment between the euphoria of the late 90s and the relative caution of investors today, who have been once bitten and are now twice shy.

Not only is the sentiment different, so are the companies themselves. Typically, the class of 1999 was selling technology to corporate customers, and their fortunes were consequently at the mercy of the capital expenditure cycle, which just happened to be peaking after a long run. Today’s crop of leaders are typically household names, providing consumers with products and services which in many cases have become virtually indispensable. Not only that, but many of them have carved out very dominant market shares—an unanticipated benefit of coming of age in the post-bubble technology bust: an era of capital starvation in which only the fittest were able to survive.

For a decade now, the smartphone has been affecting the way we live our daily lives. So, while the comparison with the Nasdaq of the late 90s is superficially tempting, the more appropriate comparison — when it comes to real business fundamentals — might be a very different one. Today’s Amazon.com, for example, has much more in common with the Walmart of the 1990s than with the Cisco. That’s a very different precedent, and one that had a very different outcome for investors. Having been researching retail companies at Orbis for almost 17 years, one of the things I’ve come to learn is that retail is not one of those sectors in which things typically revert to the mean. Rather, it’s in a state of continuous evolution with the old being replaced by the new. Shoppers tend to gravitate towards the retailers with the most effective business models, but they do so slowly — one person at a time — so the trend can take years or even decades to unfold.

The Walmart store was the retail innovation of its time. Its stores offered an unmatched selection of goods and were just a short drive away for most Americans. On its way to becoming the dominant retail franchise, Walmart consistently exploited its cost advantages, gaining market share from weaker rivals and squeezing its suppliers relentlessly. Shareholders were richly rewarded for decades. A generation later, to quote Yogi Berra: “it’s like déjà vu all over again”. A new retail champion, harnessing new technology, Amazon’s growth to date has traced a remarkably similar path.

Amazon’s current US market share is roughly where Walmart’s was 20 years ago. But, as an investor, what’s just as remarkable as the similarity in fundamentals is the similarity in share price performance. Apart from the late 90s ‘hump’ in Amazon’s share price — a manifestation of the bubble euphoria discussed earlier — investors have often been offered the opportunity to purchase Amazon shares at a price of around one times the total annual value of its customers’ purchases, the so-called GMV (gross merchandise value). That’s equivalent to the one times revenue that Walmart typically traded at — a price which proved extraordinarily attractive for investors with the benefit of hindsight. When adjusting for the value of Amazon’s cloud computing business, a multiple of one times GMV is exactly where Amazon’s share price trades today.

But is it contrarian?

What do we see here that others don’t? Well, one common belief is that Amazon’s retail business doesn’t make money the way that Walmart’s always did. That’s a widely accepted view which turns out, on closer inspection, to be flawed because of a critical difference between the online and offline business models: the way the cost of growth is accounted for, as shown in Table 2. Walmart grew its business by building new stores, whereas Amazon reaches new customers via digital marketing. While both forms of spending represent investment in the future, marketing expenses are taken as a charge on the profit and loss statement, while capital expenditure only hits the cash flow statement. While Walmart had higher accounting profits, its business model was naturally more capital intensive. Accounting profits are one thing, but in terms of generating all-important cash flows, it’s Amazon’s business model that turns out to have been more profitable.

That’s not to argue that today’s crop of market leaders will all continue to thrive. Rather, it is to observe that individual businesses should be assessed on their own merits. While that’s no easy task, it’s one that plays to the strengths of Orbis’ ‘matrix’ of independent regional and global sector research teams.

In fact, it is striking that separate work across the firm has identified several attractive opportunities along the same theme — a phenomenon that we’ve seen before and taken to describing as a ‘cluster’. Indeed, all five of our equity research teams have identified at least one member of the basket of technology stocks held in the Orbis Global Equity Fund — Amazon from the Global Sector team, Alphabet from the US, Priceline Group from Europe, NetEase from Emerging Markets, and NEXON from Japan. Each idea has been researched independently, in many cases by more than one analyst, in order to harness the benefits of our intellectual and geographic diversity, and to minimise the dangers of groupthink. The fact that our research efforts have identified so many companies along the same common theme suggests either that we’re all independently falling for the same trap, or that we’re onto something. Only time will tell which, but as always you can be sure that our culture of client alignment means we are invested alongside you.

Ben joined Orbis in 2000. Based in London, he leads the Global Sector Investment team and is one of the stockpickers for the Orbis Global Equity Strategy. Ben holds a Master of Arts (Honours) degree in Mathematical Sciences from the University of Oxford and is a CFA® charterholder.