At the end of 2015, emerging market (EM) shares had meaningfully underperformed developed market (DM) shares over the previous five years. A survey of global fund managers by Bank of America Merrill Lynch found that managers’ preference for DMs over EMs was the highest in the survey’s 15-year history. Weak sentiment translated to flows and EMs had been disproportionately on the losing end, leaving them available at a substantial valuation discount to DMs.

EM performance has since rebounded and those same fund manager surveys now find investor sentiment to be relatively neutral. While that’s an improvement from a year before, we believe it’s still overly pessimistic. EM shares remain attractive on broad valuation metrics, with the MSCI EM Index trading at 1.7 times book value compared to 2.3 times book value for the MSCI World Index, despite the fact that the underlying companies have produced a similar return on equity, both in the past year and also on average over the last 20 years.

Good performance normally leaves sentiment upbeat, but there are two fears that continue to deter investors from investing in EMs. The first is the belief that EMs underperform when US interest rates rise coupled with the (understandable) view that interest rates are unsustainably low. The second fear comes from the belief that EMs underperform during bear markets coupled with the (also understandable) view that equity valuations are rich and thus the probability of a bear market is above average.

However neither of these beliefs is supported by history, and clinging to them may cause investors to miss out on what may be an attractive long-term investment opportunity in EMs.

Since the 2008 financial crisis, authorities in the US, Europe and Japan have kept interest rates near zero and used quantitative easing in an effort to stimulate economic activity. Such an abundance of “cheap money” is arguably unprecedented and it’s understandable that investors worry about what happens when monetary policy tightens.

Pessimism also stems from the idea that higher US interest rates cause the US dollar to strengthen. This inflates the value of USD-denominated debt when measured in local currency, making it even costlier for developing countries to service that debt. 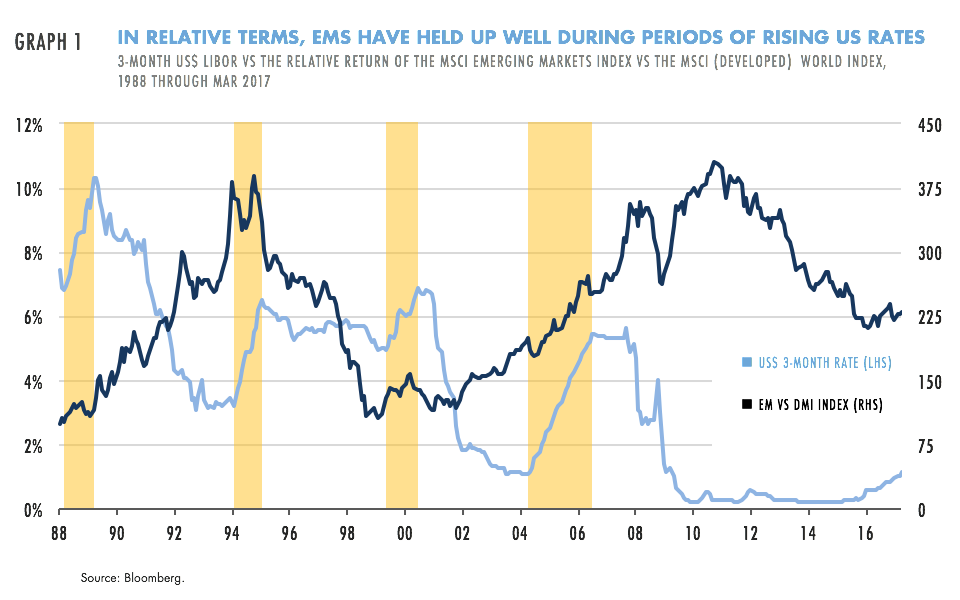 If it were true that EM shares fared worse in DM downturns, then investors may be right to avoid them as DM valuations appear rich and a turn in the cycle could be painful. However, this claim does not appear to be supported by long-term data.

In five DM bear markets since 1900, EMs outperformed in two, tied DMs in two more, and lagged in only one—the global financial crisis. Of course not all bear markets are the same; if one started today, EMs would be starting at low relative valuations, having already experienced a significant period of underperformance, and one might hope this would protect investors to some degree. History supports this hope: there have been three DM bear markets that were preceded by significant EM underperformance. In the subsequent bear markets, EMs outperformed twice and tied with DMs once.

History is not on the side of investors who believe EM shares are speculative investments prone to underperformance when US interest rates rise or if DM shares enter a bear market.

As bottom-up investors, Orbis avoids making investment decisions based on such top-down views; rather we aim to invest in individual stocks trading at a discount to their intrinsic value. As part of this bottom-up process, each stock must win its place in the portfolio by offering better long-term value than competing opportunities.

The positioning of the Orbis Global Equity Strategy therefore serves as a good measure of our view on the relative attractiveness of our preferred EM shares. Orbis Global Equity continues to maintain a sizeable exposure to EMs, reinforcing the top-down view outlined above that they continue to offer attractive valuations. We believe that this high conviction in our preferred EM shares bodes well for the long-term return potential of the Orbis Emerging Markets Equity Strategy.

Graeme joined Orbis as an analyst in 1997 and has worked in Risk Management, Quantitative Analysis and Australian equities. He is a member of Orbis’ team of Investment Counsellors, which is responsible for servicing Orbis’ institutional clients and investment consultants, and has some stock research responsibility within the Allan Gray Australian equity portfolios. Graeme holds a Bachelor of Science and a Master of Science (Honours) degree, both from the University of Auckland, and a Doctor of Philosophy degree from the University of Cambridge. He is also a CFA® charterholder.