Buying cheap stocks and selling them for a profit sounds like a reasonable way to make money. But there’s a bit more to it when it comes to the way we invest. Alec Cutler, from our offshore partner, Orbis, explains.

Over very long periods, buying cheap “value” stocks has been a winning strategy. That sounds intuitive, but people aren’t stupid. Cheap stocks are often cheap for a reason – maybe they grow less quickly, or earn worse profits, or carry more risk than other businesses.

But investors often take differences between companies too far. They get excited about an especially fast-growing or profitable or predictable company, and they start to believe it will maintain its prodigious, profitable, predictable growth forever. If the story is exciting enough, the company might look like a good investment at any price. On the other hand, investors can get too dour about other companies, thinking they will forever struggle to grow or earn decent profits – or that the future of the business is too hard to predict. If the story is scary enough, the company might look uninvestable at any price.

That is a mistake, and the reason that value investing works over the long term. At a low enough price, almost any asset can be a good investment, and at a high enough price, any asset, no matter how amazing the product, growth or management, can be a bad one. Exceptional growth often fades, and tough periods often pass. Yet investors have made these mistakes consistently enough that simply holding your nose and blindly buying all the cheap stocks in the market has historically outperformed by quite a bit.

To be clear, that is not what we do. We conduct in-depth company research, aiming to buy businesses at a discount to their intrinsic value. Sometimes this is a company whose superior growth potential is underappreciated, and other times it can be an average company where an external and temporary issue has depressed its share price, like a cork held under water. Our focus on fundamentals, however, does lend a pattern to our performance. Our approach tends to produce better results when cheap stocks are getting less cheap, and has a tougher time when expensive stocks are getting more expensive.

In the decade since the trough of the financial crisis, we have seen more of the latter – expensive stocks getting more expensive. This is shown in Graph 1, where the dark line has sloped upwards from 2009. The spread between the valuations of cheap and expensive shares has become much wider. 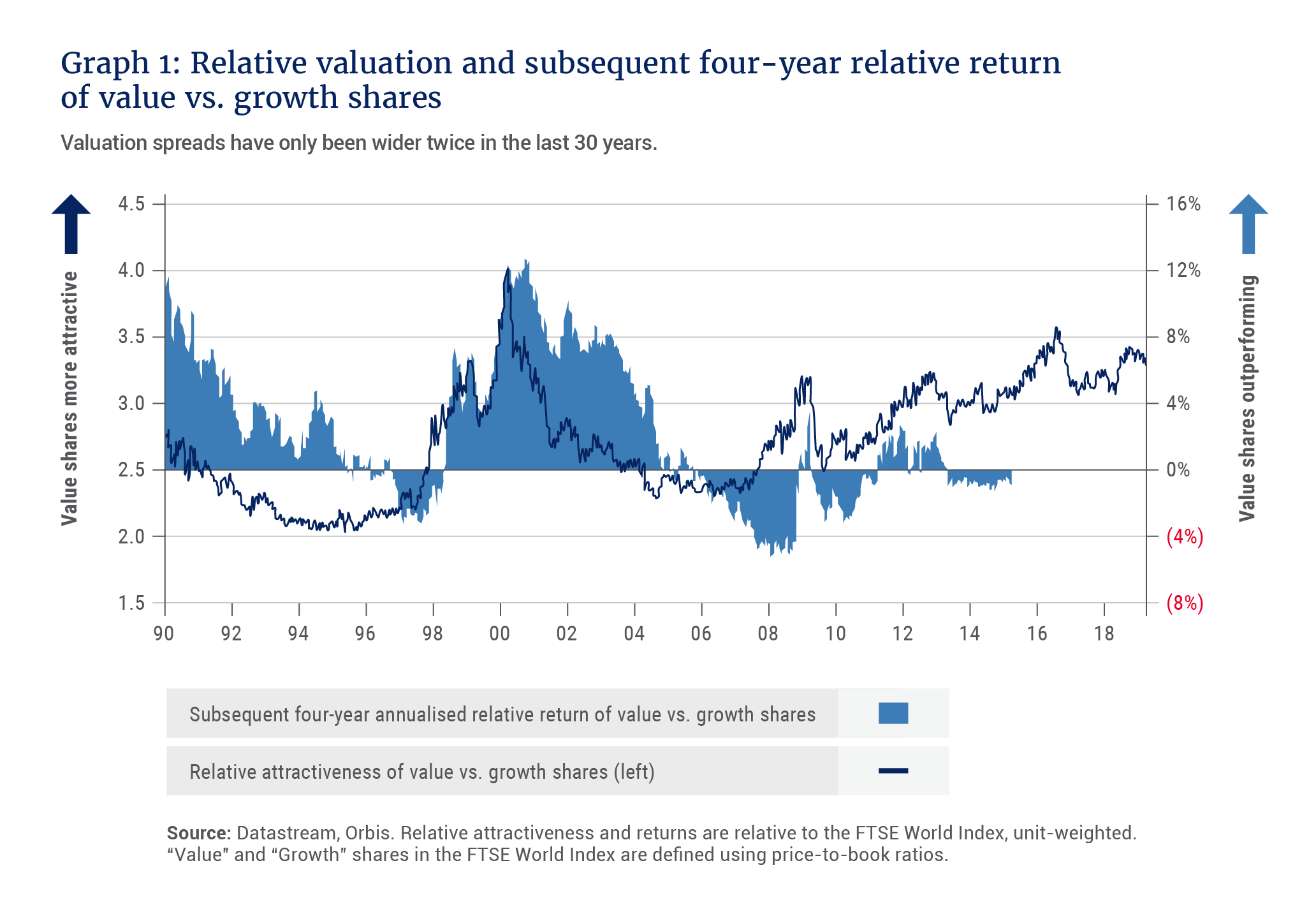 While value shares have done relatively poorly lately, over the long term, investing in value shares has significantly outperformed – compare the area of light blue above the line to the area of light blue below the line. By definition, value stocks are always cheaper than the expensive stocks in the market, but sometimes they are just a bit cheaper, and sometimes they are much cheaper. As the shaded area in the graph shows, hunting for ideas among value stocks is much more rewarding when valuation spreads are wide, as they are today. Thus you should  not be surprised that the Orbis Global Balanced Fund’s equity holdings have increasingly tilted toward shares trading at low multiples of their normalised earnings, or low valuations relative to their history. We’ve been holding our noses and adding to what’s currently unwanted, untouchable, and cheap, relying on our fundamental research to fight human nature and buy when others think we’re foolish.

Excited about the opportunities

While leaning into those shares, and selling what have become appreciated “winners”, has been painful from a performance standpoint, we are equally excited by what we’re able to buy, at the prices we’re able to buy them for. To explain this enthusiasm, we need to take a step back.

Sometimes, the expensive stocks in the market are called “growth” stocks, but it’s important to understand how those buckets are defined. In discussions about value  and growth, “growth” stocks are conventionally defined  by their high valuations – paying no attention at all to the companies’ actual growth! “Anti-value” would be a more accurate term.

Likewise, just because a stock is cheaper doesn’t mean it’s a worse business. This is what we spend much of our research time exploring. By conducting research on many ideas, we can sometimes find stocks that are cheaper than the average stock and have better growth, profitability, and balance sheets than the average company. When we find and build conviction in these, we invest. Tables 1 and 2 show some valuation and fundamental characteristics of the equity portion of the Orbis Global Balanced Fund.

In aggregate, they are cheaper than the wider market as a multiple of their book value, sales, trailing and normalised earnings, free cash flow, and dividends. But as a reminder that low valuations don’t entail poor growth or quality,  those same holdings, in aggregate, have historically delivered better returns on equity, grown book value and revenues more quickly, and currently have stronger balance sheets than the average stock in the index. Though many of them have been painful to hold over the past several months, we believe the portfolio today is simply more attractive for it when compared to the equity component of its benchmark. A number of the portfolio’s top holdings tick more than one of these boxes, including oil giants BP and Shell, US pharmaceutical company AbbVie, Taiwan Semiconductor Manufacturing Company, and German pharmaceutical company Bayer. We can’t know when expensive stocks will stop getting more expensive, but when the time comes for cheap stocks to get less cheap, we think shares like these should be at the front of the line.

If valuation spreads are wide, looking at the cheap stocks is only one side of the coin. So what’s on the expensive side? Some names you’d expect, like Netflix and Amazon, where investors are very excited about potential growth.

But also some stocks that have made a virtue out of being unexciting – defensives such as consumer staples in the US. In fact, the “momentum” bucket of stocks, which is usually filled with glamorous, high-growth companies, is currently chock-full of defensives. Utilities, for instance, represent just 5% of the stocks in the MSCI World Index, but 14% of the stocks with the best 12-month price performance.

Safe businesses can be poor investments

We’ve observed before that investors appear to be overpaying for perceived stability and predictability. We’ve noted that at a high enough price, even “safe” businesses can be poor investments. And in some cases, the apparent safety of these businesses looks to be propped up by debt.

Consider Coca-Cola, which has outperformed world markets over the last 12 months. Having invested in advertising for decades, the company has created an iconic brand, and with an iconic brand, selling sugary syrup can be a nicely profitable business. The company has historically paid out 60% of the resulting cash, leading to steady growth in dividends. This reassuring dividend growth has continued without a blip in recent years (and kept the stock on the buy list for some large, popular “dividend growth” exchange-traded funds).

Over the same period, however, consumers have soured on sugar, and Coca-Cola’s revenues and profits today are lower than they were in 2010. The company has responded by buying back shares – if you cut the same pie into fewer shares, it should be easier to keep each share growing. Yet even on a per-share basis, revenues and earnings have failed to grow. With rising dividends and falling profits, the company is now paying out over 100% of its cash flow, leaving nothing for reinvestment. The money for all those dividends and share repurchases has to come from somewhere, and without rising profits, the company has turned to increasing debt to prop up shareholder returns. Since 2010, Coca-Cola’s net debt per share has more than doubled.

That’s what we see if we look at the company today – a business that is struggling to grow, paying out every cent it earns, and piling on debt. It simply does not appear to be the dependable grower it was in the past. Yet you would never know that from looking at the share price.

Since April 2010, it has matched the more than 100% rise in the MSCI World Index, and today it trades at 30 times trailing earnings. That is more expensive than Google (Alphabet), which is still growing by 15% per year, and it’s as expensive as Chinese internet giant Tencent, which is growing by 25% per year. Something here doesn’t look right.

Sticking to our formula

In an environment where many of the expensive stocks appear risky, we are happy to be hunting for opportunities among cheaper shares. Rather than overpaying for slowing, increasingly leveraged “safe” shares, we’d prefer to underpay for good businesses when investor expectations are nice and low.

We can’t predict when expensive stocks will stop getting more expensive, or when our performance will turn, but we are determined to stick to our discipline. We remain convinced that buying quality on the cheap and passing on what’s highly valued by others remains a winning formula over the long term.