Global perspective: Do value shares deserve to be this cheap?

The Orbis Global Balanced Fund aims to balance capital appreciation and income generation with the associated risk of its investments. These objectives naturally make the Fund relatively fond of securities that offer attractive yields. Alec Cutler looks at where the Fund is finding value.

There is a difference between attractive yield and high yield, and we do not pursue high yield at the expense of all other characteristics. In Global Balanced, as in all the Orbis and Allan Gray funds, two considerations trump all others: whether a security offers a discount to our assessment of its intrinsic value, and whether holding it will improve the portfolio’s overall balance of risk and return.

In 2016, Global Balanced’s yield declined, from a peak of 3.5% per annum (p.a.) to 2.5% p.a. today. This does not mean we are departing from the Fund’s mandate. Far from it. We still like securities with attractive yields, but with their rising popularity and valuations, we believe stocks with high yields now offer less potential for capital appreciation and a higher risk of loss than they have for some time. This year global high yield shares in aggregate have grown roughly 10% more expensive relative to the wider stock market, as shown in Graph 1. Their relative price-to-book valuations peaked just as US bond yields troughed, which is no accident – low bond yields have pushed many investors into stable yielding equities in search of income. And more recently high-yield shares have remained expensive despite rising bond yields. That keeps us wary. Finding these ‘lower risk’ names in the portfolio rather risky from a valuation standpoint, we sold many of the Fund’s stable yielding holdings in early 2016. 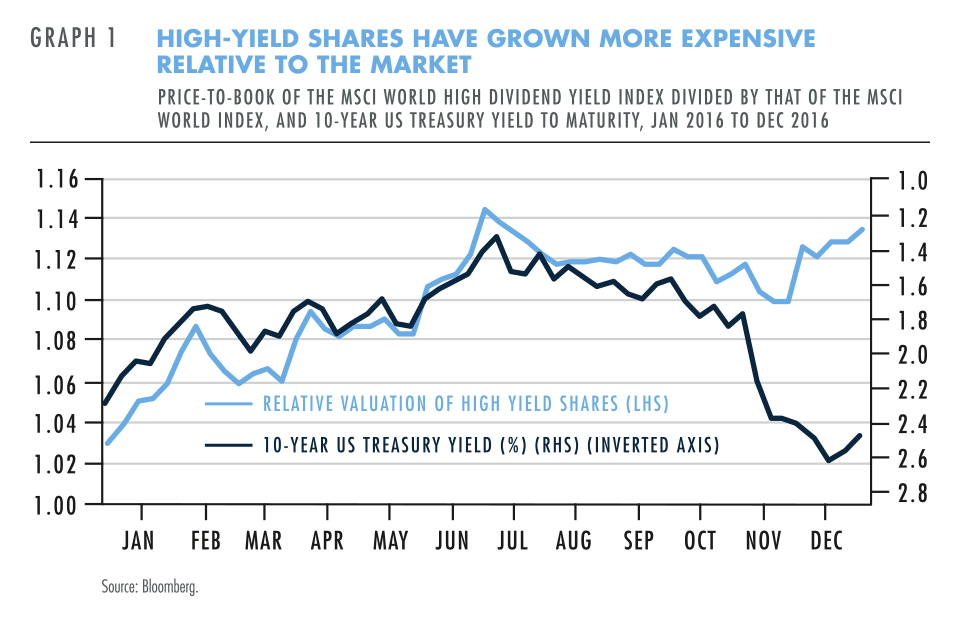 Instead, we have gone to where the discounts are. Often, the best way to protect against losing money is to buy what’s already down and inexpensive. Where that has led us to shares with greater business uncertainty, volatility, or economic sensitivity, we have worked to mitigate these risks by selectively hedging stock market exposure and by building greater conviction through continued fundamental research.

There are similarities between our investment philosophy and a traditional value approach of buying shares with low price multiples. We are not textbook value investors, as we believe discounts to intrinsic value can also arise when the market assigns an average valuation to a company with superior growth prospects. But if you are looking for shares that trade at a discount to intrinsic value, it’s not a bad idea to hunt among shares that trade at low multiples of their book value, earnings, or free cash flow. Lately, such ‘value’ shares have appeared exceptionally attractive, as shown in Graph 2. 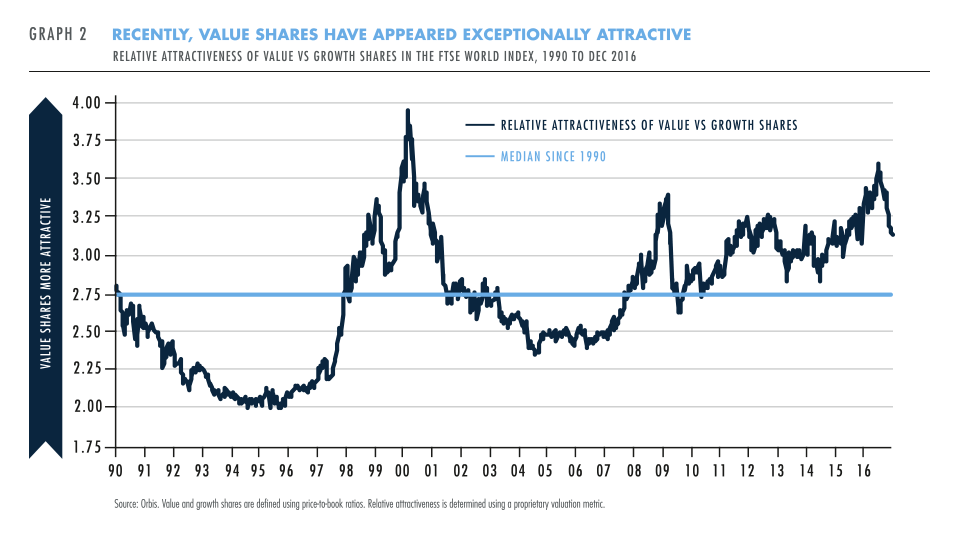 This follows a period of unusual underperformance for value stocks. Over very long periods, buying stocks that trade at a low multiple of their book value, earnings, or cash flow has proven to be a winning strategy. In the US, where a longer history of the factor’s return is available, value shares have outperformed by 4% p.a. since 1926, and by at least 2% p.a. in almost every 20-year rolling period. There have been some painful periods of underperformance, such as the great depression in the 1930s and the run-up to the 2000 technology bubble, but since 1926 value shares had never gone more than six years in a row without experiencing outperformance (see Graph 3). 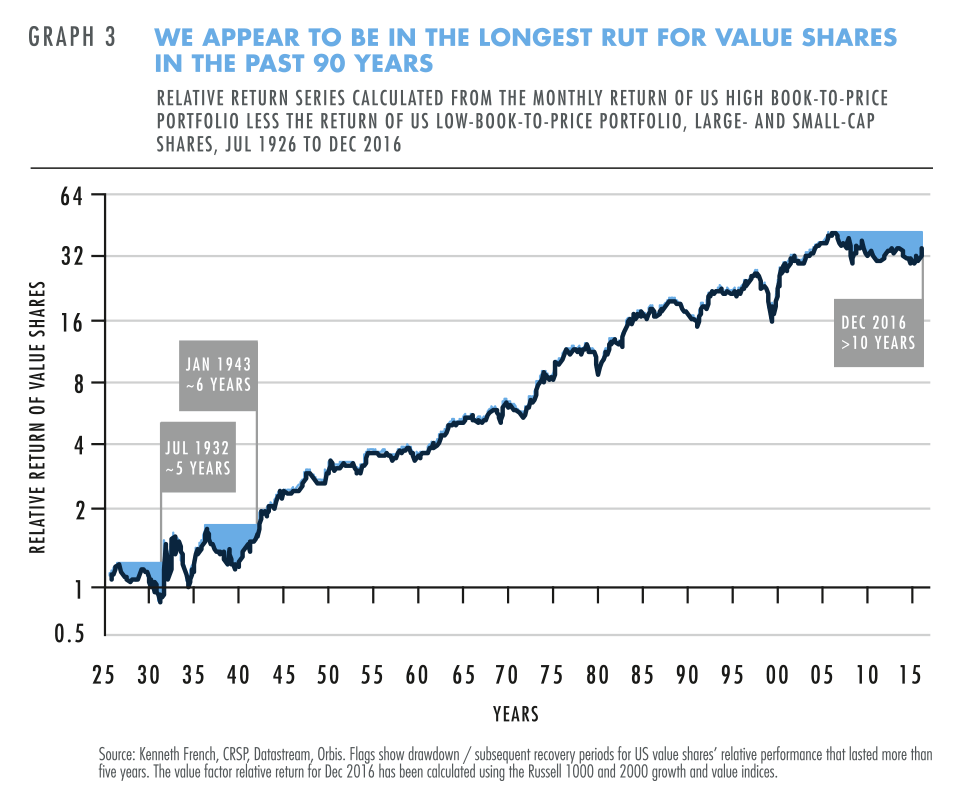 In the US and globally, value shares have lagged their growth counterparts since the end of 2006. With the data available to us, this looks to be the longest value shares have ever gone without marking a new peak in relative performance. After a long period of pain, it is tempting to wonder whether this time is different. Perhaps the value ‘anomaly’ has been eroded as investors have become aware of it. Perhaps the poor recent performance is a sign that the value approach is broken and it’s time to give up. Or maybe it’s a sign that the relationships between prices and fundamentals are still really stretched in some parts of the market. We believe that is the more likely explanation, and it leaves us excited about the opportunities in your portfolio.

How has this played out in the positioning of your Fund?

The shift toward value – as well as the drop in yield – has been driven by increased bank, energy, and health insurer holdings, as well as one-off deep value opportunities where we believe we have a research-driven edge. Wells Fargo is a recent example of what we’re finding.

Wells is one of the premier US lenders. Reflecting its high quality, it has historically commanded a premium valuation compared to its banking peers. It is unusual for that premium to evaporate – yet it has this year. Wells was caught in a fake accounts scandal, and, although the breach was serious, it was exacerbated by the very partisan US election cycle, leaving the normally-above-the-fray company stuck in congressional hearings and on the front page of newspapers for weeks. Investors responded to the negative press, pushing the share down 14% from the beginning of September to early October. That brought the company’s valuation down to 11 times trailing earnings and 1.25 times book value. Those would be reasonable multiples for a mediocre bank, but for Wells, they were deep value levels. With our research identifying the fake account issues as unlikely to have nearly the lasting impact on valuations priced into the stock, and likely to be short-lived in intensity, we were able to build Wells into a top ten holding with a 2.4% position. While the stock has risen since then, the ride back to fair value may well still be a bumpy one.

It would of course be nice, and not too hard, to craft a pretty portfolio that has a high indicated yield. But we’re not hired to do nice or easy, and right now we believe that a feel-good portfolio would be very risky without bringing much in terms of reward potential. More to the point, our best investment ideas and research efforts have resulted in an overall shift towards more classic value shares in Global Balanced’s portfolio. While only time will tell whether this was the right move in the near or medium term, we are confident that following our philosophy in a disciplined manner will bear fruit over the long run.