Drilling into the detail of oil and gas investments

At first glance, the Orbis Global Equity Fund's exposure to Oil & Gas; Gas stocks appears to be similar to that of its benchmark. At December 2012, about 9% of the Fund was invested in the sector, a little below the 10% weighting in the benchmark. This slightly below-average exposure to the sector, though, does not mean Orbis is bearish on the price of oil or gas. As Dan Brocklebank from our offshore partner Orbis elaborates, the allocation to these stocks is simply a function of the opportunities Orbis has identified to invest in undervalued companies in the sector.

The Oil & Gas sector is a relatively complex one and its high capital intensity means that there are few really attractive business franchises.

Companies are typically also price takers, rather than price setters, so commodity prices are an obvious consideration for investors in this sector. However, these are notoriously difficult to predict and can be extremely volatile; investors are still generally very wary of this, remembering the experience of 2008 when the price of Brent crude fell from about US$140 a barrel to about a quarter of that level in less than six months (see Graph 1). 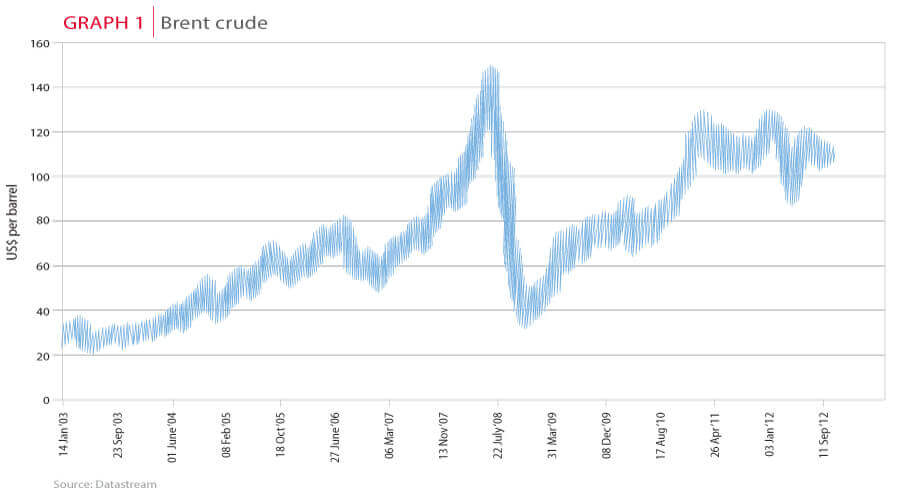 As commodity prices are one of the key determinants of profits for companies in this sector, short-term earnings remain very difficult to predict. Our investment philosophy, though, places little weight on such forecasts anyway; instead, we try to focus on a conservative estimate of normalised commodity prices in estimating company profits and values.

In assessing 'normalised' profits we take into account secular trends facing the industry, on both the supply and demand side of the equation. One unusual aspect of the production in the industry is the geologically driven 'decline rate' that oil and gas production faces each year. The term 'decline rate' (expressed as a %) indicates how much less an existing well will produce in one year's time as a result of production during the year depleting the reservoir. On a combined basis, the industry faces a production decline rate of about 5-7% per annum (see Graph 2). Currently, about 70 million barrels of oil are produced per day (BPD) so the industry needs to develop and add about 3.5 million BPD each year just to keep production constant. By 2016, for example, production from today's existing wells is forecast to drop by 16 million BPD, more than Saudi Arabia's current production levels. Across the industry, this means that a significant amount of new production will be required on an ongoing basis unless we see a meaningful drop in consumption. 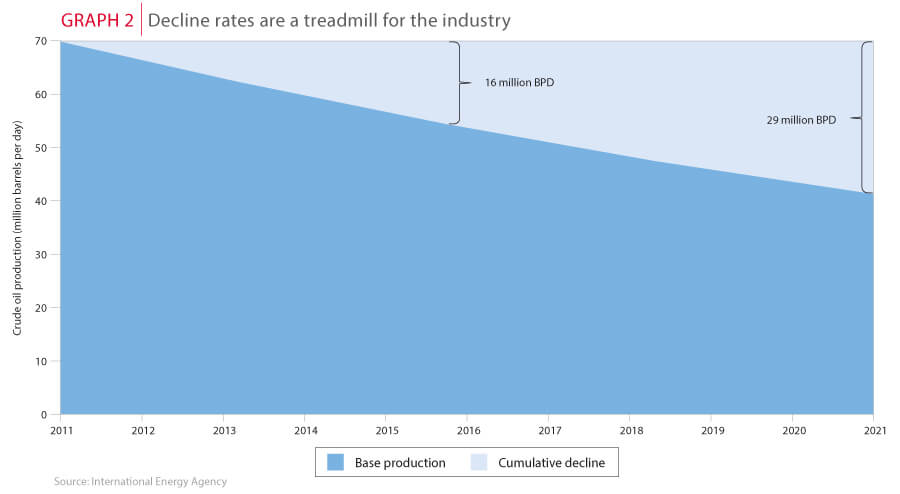 At the same time that declining production needs to be replaced, oil continues to become harder to find and extract; this in turn generates demand for new technology and services. One measure of the increasing technical difficulties involved, is how the depth of an oil and gas well has increased over time. In 1950, the average US well was drilled to about 3 600 feet. Now it is closer to 6 000 feet and shale oil wells are routinely drilled to a depth of 8 000 feet or more. Unsurprisingly, the deeper the well, the more complex, time consuming, and expensive the drilling and production process becomes. Indeed, over the last decade, the total global capital expenditure of the Oli & Gas industry has more than doubled, while production has increased by only about 15%. We would expect these broad trends to continue and for the services market to continue to expand as a result.

Looking at the sector exposure in the Orbis Global Equity Fund, you will see that the Oil & Gas stocks in the Fund are very different from those in the benchmark. The top 20 Oil & Gas producers, such as ExxonMobil, Chevron and BP, comprise more than 60% of the benchmark's exposure to the sector. Orbis owns none of these companies.

We find little to disagree with about the way the market considers these companies; they trade at a significant discount to the market on price to earnings (PE) multiples, but are arguably less attractive on a free cash flow basis given the ever-rising cost of replacing their depleting asset base and their limited growth potential. As a result, we do not find them to be particularly attractive relative to the market as a whole, and particularly not when compared with other opportunities in the sector.

By contrast, we have found opportunity in the smaller Oilfield Services sub-sector. These companies provide the technology and services to the companies that actually own or produce the oil and gas. Clearly these companies are well positioned to benefit from the secular trends facing the whole industry outlined earlier. As well as this ongoing growth opportunity as the market expands, we think there is a case for mean reversion in the sector's margins and earnings multiple following a volatile few years.

Consider our holding in Weatherford International, which is the smallest of the four major global service providers. There are many reasons for the market to dislike the stock, not least a long series of recent earnings disappointments and a recent re-filing of its financial statements caused by errors in its tax accounting. Weatherford's current earnings remain well below our assessment of their long-term, cross-cycle potential, with operating margins near a cyclical low of 10% - about 5% below their 15-year average (see Graph 3). 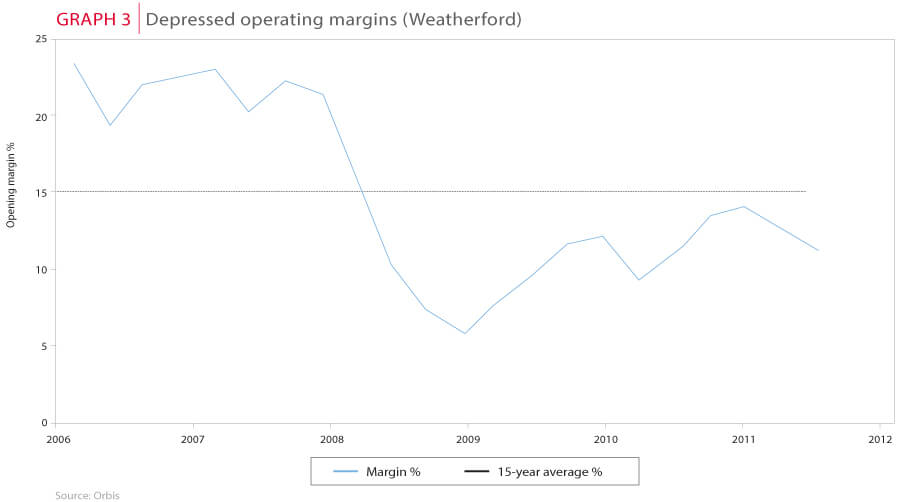 Based on trailing revenues and operating margins, Weatherford trades at 12 times price to earnings, and six times its enterprise value (EV) to earnings before interest, tax, depreciation, and amortisation (EBITDA), suggesting that the market thinks that revenues are unsustainable or that operating margins will remain at current levels. We think that this view is overly pessimistic. Industry demand for oilfield services is cyclical and is showing some signs of weakness in North America.

However, it remains robust in most other markets and, importantly, for Weatherford's key product lines. Based on the current revenue run-rate and normalised operating margins, Weatherford trades at an EV/EBITDA multiple of less than five and a PE multiple of about eight. Over time, we expect Weatherford will be able to grow faster than the industry due to its product portfolio and exposure to faster growing international markets. Taking a long-term view on intrinsic value, we think that the company can justify an earnings multiple of 15 times, which is below what it has averaged over long periods of time.

We have also uncovered value within some smaller, more idiosyncratic energy stocks, such as US-based Cheniere Energy and Calgary-based companies Petrobank Energy & Resources and Petrobakken Energy. Before new technology made it possible to successfully develop shale gas formations, Cheniere constructed a terminal at Sabine Pass on the US Gulf Coast to import foreign gas into the US. Since production from shale gas has taken off, the US natural gas price has collapsed, making imports unnecessary. As a result, Cheniere has been forced to radically adapt its business model and is now in the process of converting its Sabine Pass plant to export gas instead. Over the last 12 months, Cheniere has signed multiple long-term contracts to finance this plant conversion. Interestingly, the contracts are structured on a 'take or pay' basis so that Cheniere gets paid whether or not gas actually ends up being exported by its customers. This means that the future earnings of the company are largely immunised from fluctuations in commodity prices.

Petrobank, meanwhile, provides us with a free option on some potentially transformative technology for heavy oil production. On 1 January 2013, Petrobank (an existing holding) spun out its remaining holding in its oil-producing subsidiary Petrobakken so the Fund now owns shares in both of these companies directly. We think that this spin will reduce complexity in the previous corporate structure and finally allow investors to properly appraise both companies. Petrobakken is an on-shore oil producer that should be able to grow production and cashflows at around 10% per annum. With a current dividend yield of 10%, the market is clearly sceptical about the company's plans and the sustainability of the current capital structure. We think the market is underestimating the quality of the company's drilling inventory. The remaining Petrobank 'stub' consists of net cash, some heavy oil assets and Petrobank's technology interests. The main technology is called Toe to Heel Air Injection (THAI) which, if commercially viable, will significantly improve the economics of heavy oil production. It is important to recognise that this technology may very well not prove to be commercial; the first large-scale project has suffered delays and investors are disinterested in the story as a result. We would not claim to be able to handicap the odds of success with any degree of precision. However, this has been a free option for us in the investment because, prior to the spin, the market value of its Petrobakken state.

WE BELIEVE WE HAVE FOUND A SMALL NUMBER OF ATTRACTIVE INVESTMENTS IN THE SECTOR, STOCKS WHICH REMAIN ATTRACTIVE WITHIN QUITE A WIDE RANGE OF COMMODITY PRICES

Sticking to our investment philosophy

Investments in the Oil & Gas industry are always going to be somewhat sensitive to movements in, and sentiment around, underlying commodity prices, particularly in the short term. These movements are not something we can control or forecast.

However, we believe we have found a small number of attractive investments in the sector, stocks which remain attractive within quite a wide range of commodity prices.These holdings are the result of extensive stock-by-stock research rather than a bet on the sector or underlying commodity prices. The common reason for us being able to identify these opportunities is that the market is typically more concerned about various shorter-term issues facing each company than we believe is warranted and, as a result, is paying insufficient attention to the long-term prospects and intrinsic value of each company.

Dan joined Orbis in 2002 as part of the Investment team and was, most recently, responsible for leading the Global Sector Investment team in London. In 2016, he was appointed to lead Orbis' UK operations and he is now chairman of the firm’s UK Executive Committee. Dan holds a Master of Arts (Honours) degree in Politics, Philosophy and Economics from the University of Oxford. He is also a qualified Chartered Accountant and CFA® charterholder.

Orbis: Well positioned for the challenges that lie ahead

In his annual president’s letter, William Gray, from our offshore partner, Orbis, pays tribute to his father and reviews Orbis’ performance and prospects.

Our offshore partner, Orbis, is improving its fee structure. We intend to implement these changes on 14 May 2020.

Orbis has been going through a period of painful underperformance. Jonathan Brodie reminds investors what Orbis is trying to achieve, examines performance ov...

Market breadth has been very narrow offshore, with few winners and many losers. Among the losers have been emerging markets and select cyclicals. At the same...