Broadly speaking, one could think about building a portfolio in two key ways. Investors with a 'top-down' approach start with a wide view of the world and make decisions about which countries or sectors look the most attractive at any given time. Once these allocations are made, they flesh out their portfolios by investing in the shares they consider to be most attractive in each area. On the other hand, investors who adopt a 'bottom-up' approach, like Orbis and Allan Gray, start by searching for undervalued stocks. Our analysts regularly perform in-depth research on a wide range of companies, seeking to understand their underlying value based on long-term fundamentals. We then step back and ask ourselves which shares appear to offer the greatest dislocations between the market price and our assessment of their value. With this in mind, we seek to position our portfolios in the most attractive opportunities at any given time. Seema Dala and Tamryn Lamb discuss how, ultimately, our funds' overall positioning is driven by our analysts' views on individual companies, rather than 'the big picture'. But they also illustrate how 'clusters of ideas' can arise, using the Orbis Global Equity Fund's exposure to US healthcare shares as an example.

Orbis often sees very significant exposures or key areas of concentration emerge at the portfolio level as a result of bottom-up stock selection decisions, which may appear as taking a view on a particular sector. This is not the case; rather, and to borrow a mining analogy used in an Orbis quarterly report late last year, the discovery of one nugget often leads to a rich vein of similar ideas, which tend to be clustered around specific industries or countries.

In the Orbis Global Equity Fund, five areas currently account for more than half of the portfolio's net asset value. These include North American Technology, Oil & Gas and Healthcare, Asia ex-Japan Technology, and Japanese Consumer Services. Collectively, these areas make up less than a quarter of the FTSE World Index. The North American Healthcare exposure is dominated by three significant stock positions, in WellPoint, Humana and Aetna. These health insurers comprise 8% of the Fund, compared with a less than 1% weighting in the World Index.

Orbis first bought WellPoint in October 2008, at a time when the US health insurance sector was deeply out of favour with investors. WellPoint shares had lost more than half of their value after hitting an all-time peak in January of the same year. The rapidly deteriorating economy threatened to decrease WellPoint's membership base, and profit margins were being squeezed by rising medical loss ratios (MLRs) - defined as the percentage of premiums spent by the insurers on medical costs. There was also an overwhelming sense of fear and uncertainty about what an Obama victory might mean for the implementation of healthcare reform. Some investors even feared a fully nationalised healthcare system. More importantly, it was unclear what impact such reforms would have on the healthcare insurers' business models and overall levels of profitability.

Orbis believed that the market's outlook was far too pessimistic. The major US insurance providers would ultimately be part of almost any healthcare reform solution,with an opportunity to cover millions of previously uninsured Americans. Approximately 16% of the US population - or nearly 50 million people - are uninsured. Yet WellPoint's valuation of just seven times earnings, which was about half its long-term historical average, was effectively pricing in a scenario in which growth would never return, medical costs would fail to normalise, and margins would remain at about half their historical norms. Orbis believed that the odds of this bearish scenario playing out were very low.

Orbis' research on WellPoint prompted a look at other companies in the sector, including health insurers Aetna and Humana.

At the time Aetna was purchased in the Orbis Global Equity Fund in late 2009, the implications of reform remained uncertain and investors continued to avoid the sector. Weakness in the US economy also continued to weigh on membership growth. When healthcare reform was finally signed into law in March 2010, the business impact was nowhere near as bad as many had feared. Still, both WellPoint and Aetna shares remained weak for much of 2010 as concerns shifted to the details of how the reforms would be implemented. With the underlying long-term fundamentals unchanged, and the theses intact, Orbis Global increased its position in both shares.

Against this backdrop, the Humana opportunity was also identified. The investment thesis for Humana, which now accounts for 2.4% of the Fund, is predicated on the view that Humana will continue to deliver earnings growth as a key provider of government-funded healthcare services. By way of background, the US government pays for the healthcare of individuals over the age of 65 through the Medicare programme. These participants have the option of having those benefits delivered via Medicare Advantage (MA), a privately administered programme managed by insurance companies such as Humana. MA plans generally offer simplified paperwork, better coordination of benefits across multiple healthcare providers, and ancillary benefits (e.g. fitness memberships) that traditional Medicare coverage does not provide. As a result, MA plans have become increasingly popular. More than 25% of eligible participants opt for MA plans and Humana is the second-largest provider.

Humana stands to benefit from the massive wave of baby boomers joining the Medicare rolls in the years to come. More than 25 million seniors are expected to 'age into' the Medicare programme over the next 15 years. By 2030 Medicare enrolees are expected to account for about 20% of the US population. The MA segment of the market is growing even faster. Given Humana's strong market position and the popularity of the programme, Orbis estimates that the company could capture over 5% membership growth for many years to come.

The market remains less convinced for two reasons: First, the MA programme is potentially facing billions of dollars in cuts as a source of financing for the healthcare reform package. Secondly, the market expects operating margins to drop as a result of reform. Orbis believes these fears are overblown. The company has successfully navigated the MA marketplace for many years and even in the face of lower reimbursement rates from the government, Humana appears well placed to deliver 10% p.a. earnings growth over a five-year horizon. On the cost side, the margin pressure has been expected for some time, and Humana has been preparing and adjusting its operating structure accordingly. Neither of these positive factors was captured in the valuation.

Where do we stand today?

Today, all three companies trade at roughly half their historic levels, with free cash flows per share equivalent to 13% of their share prices. When compared to their healthcare peers, the insurers trade at a discount to the average pharmaceutical share on 12 times earnings, despite superior growth prospects (see Table 1). For a more detailed comparison of the healthcare insurers versus pharmaceutical shares, please refer to the Orbis quarterly reports available via www.orbisfunds.com. 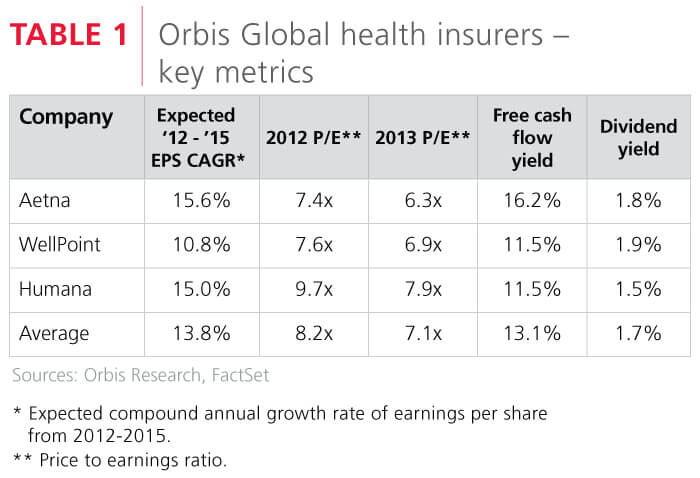 All three insurers offer an opportunity to invest in a business with a solid franchise and competitive positioning generating substantial free cash flow. WellPoint, for example, has demonstrated its willingness to return this cash to shareholders in the form of share buybacks and dividends (as seen in Graph 1) - arguably an attractive characteristic in a capital-starved environment. 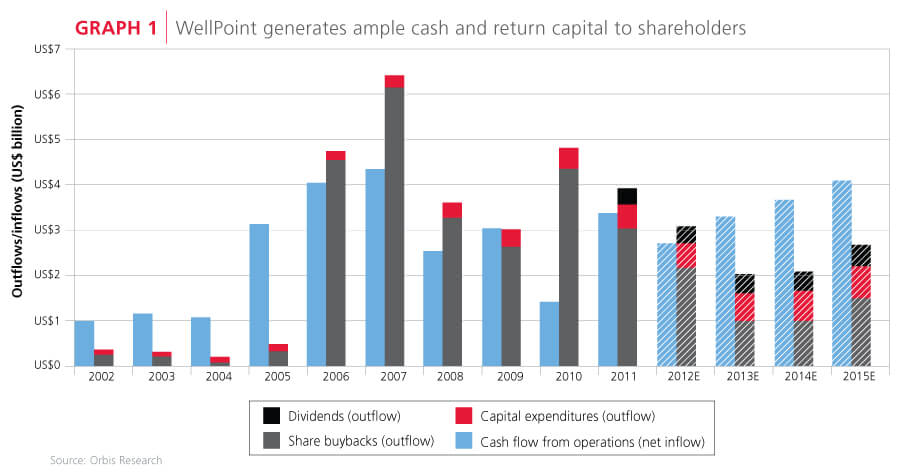 The market, however, believes that the business should be priced at around eight times future earnings, not far from the levels seen during the darkest days of the healthcare reform when the stock was first purchased. This is lower than the five- and 10-year historic averages (see Graph 2). In 2010-2011, these three healthcare stocks each contributed positively to Global's relative performance. Having been extremely conservative with pricing in the face of great uncertainty, insurers were in a position to deliver a string of quarterly results that easily beat earnings estimates. In 2012, however, although the insurers managed to exceed consensus forecasts in the first two quarters of the year, it was not enough to satisfy the market's lofty expectations which, compounded with a few self-inflicted execution mistakes, caused the stocks to underperform.

The healthcare reform debate is on investors' minds once again as the November US presidential election approaches,and few investors are willing to touch these shares ahead of that time. Orbis sees it differently. If Mitt Romney is elected, the stocks are likely to rally on the prospect of a repeal of 'Obamacare' or significant changes to the healthcare law. If Obama is re-elected, the industry can proceed as it has been planning for the past two years. Either way, Orbis believes investors will have much greater visibility on the sector over the next six to 18 months.

What is clear is that sentiment in this space is more volatile than earnings and, with the sentiment pendulum shifted strongly to the bearish camp over recent months, the resultant share price weakness has given Orbis the opportunity to increase the Fund's position. There appears to be a sizeable gap between Orbis' assessment of intrinsic value and what is being reflected in current share prices. Over the long term, Orbis believes the exposure to the healthcare cluster represents attractive value and a compelling risk-adjusted opportunity.

Seema was employed at Allan Gray from 2007 to 2016. She joined Allan Gray as an investment analyst, before moving to Institutional Client Service and later becoming the joint head of this team. Seema has a BBusSc from UCT, is a qualified CA (SA), and completed her management and leadership studies at Harvard Business School.

Tamryn is head of Retail Distribution. She joined Orbis in London in 2006 as an investment analyst, covering European equities. After spending several years in both investment and client-facing roles, she joined Allan Gray in the Institutional Client Services team in 2013. Tamryn completed her Bachelor of Business Science degree at the University of Cape Town and is a qualified Chartered Accountant and a CFA® charterholder.

Orbis: Keeping a clear head during the COVID chaos

2020 has proven to be a year of many firsts, for all the wrong reasons, resulting in much uncertainty. Presenting to clients via Zoom webinar, Alec Cutler,...

Orbis: Lesson from the past

Orbis: The importance of preparation

In this six-minute video, Orbis' president and head of the investment team, William Gray, discusses the impact of COVID-19 on the firm and the importance of...

Orbis: Turn away from the noise and look to the long term

Much has been written about the emotional cycle of fear and greed in investing. Both panic and excessive optimism can create extraordinary opportunities for...